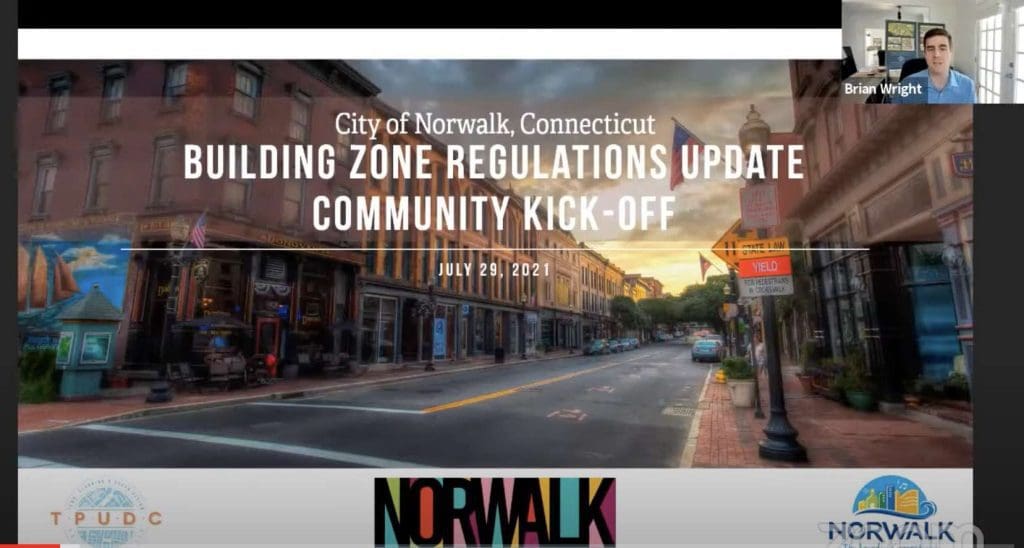 NORWALK, Conn. — Norwalk residents got their first look at the goals and timeline behind the city’s zoning regulations overhaul last week. The city’s consultant Town Planning and Urban Development presented how they plan to review and update the city’s zoning code, which was one of the goals listed in Norwalk’s Plan of Conservation and Development.

Norwalk’s zoning regulations haven’t been updated in about 30 years, according to Steve Kleppin, the city’s director of planning and zoning.

“When I came to the city five years ago, I identified updating the zoning regs as one of the prime things that needed to be done,” Kleppin said. “The regulations haven’t seen a significant rewrite in over 30 years…Thirty years in the life of a zoning regulation is a long time.”

One of the main goals behind the update to the regulations is to make them clearer for residents, officials, developers, business owners, and other constituents to understand, city officials said.

“We have some issues with the zoning regs as they’re currently written,” Mayor Harry Rilling said. “They need to be more up to date, they need to be more in sync with our Plan of Conservation and Development. We need to be sensitive to the housing needs that we have here in Norwalk and we have to make sure that when we do develop…that we’re doing it smartly.”

On July 29, Brian Wright, a principal at TPUDC, kicked off the process with a public meeting to give the public an overview of zoning, what their company can bring to Norwalk, and how constituents can be involved. The process, which includes a large, public Plan-a-palooza event in mid-September, will take until about summer 2022, Wright said.

Here are some of the main takeaways from the first event. 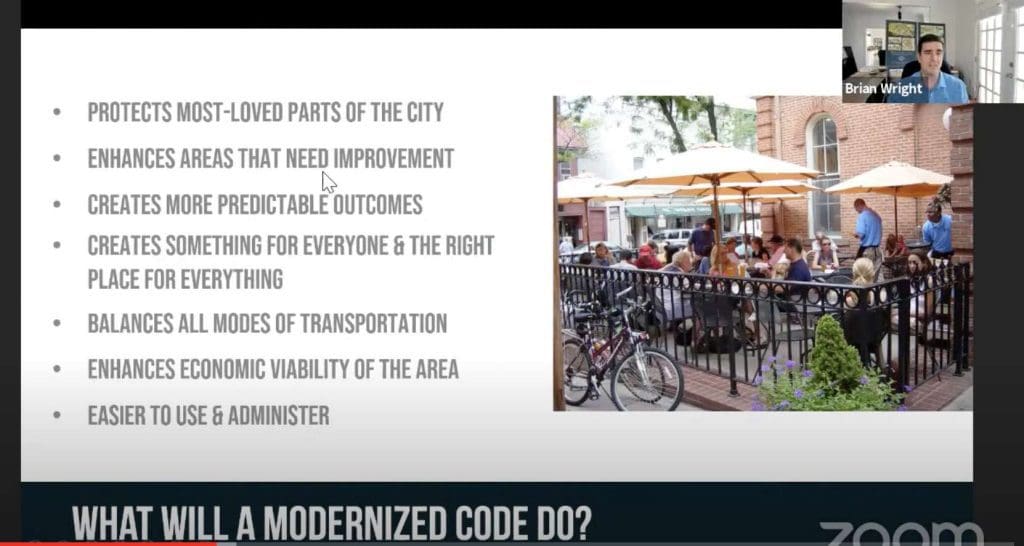 Keep what works in Norwalk and learn from what doesn’t

Wright emphasized that the public has a key role to play in the planning process because residents and constituents are “the experts.”

“One of the things I don’t want to do is regurgitate something that we’ve done elsewhere,” he said. “That’s where you all become so important because we know that whatever we do for you, has to be uniquely Norwalk. It has to have Norwalk in it, so that’s what we need you to help us with—to hold us accountable as we move forward to make sure that each element of the zoning update feels like and represents your Norwalk and the vision for the future from your perspective. “

So far, Wright and his team have interviewed elected and appointed officials to get an overview of the city, but they plan to hold multiple public sessions, including a “Plan-a-palooza” that will run from Sept. 17 to 21.

“It’s not your normal planning and zoning event,” Wright said, stating that there will be multiple events during that stretch for residents to weigh in and activities for them to participate in that will allow them to shape the zoning regulations.

So far in his conversations, Wright said a number of themes have occurred.

When asked what people liked most about Norwalk, people responded with: “waterfront, parks, good schools, safe city, unique neighborhoods, easy access to NYC, diversity, variety of housing, ‘everything for everyone,’ history, and natural beauty.”

When asked what some of the challenges facing the city were, respondents said: “old city with old infrastructure, growth pressure, affordable housing, businesses post-covid, attracting new companies, gentrification, some areas need to be revitalized, need a higher level of design in new development.” 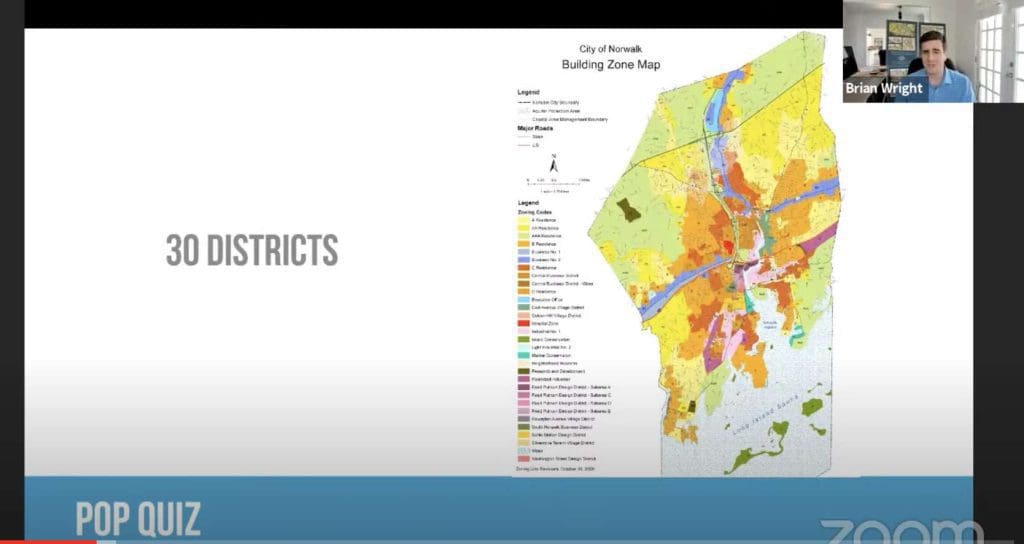 One of the biggest themes that came out of the first meeting was making the zoning regulations easy to understand for everyone—residents, homeowners, business owners, developers, and officials.

“We want to make sure that what we’re doing is clear and compelling,” he said, adding that they hope to make the regulations “very graphical and very intuitive.” “We want it to be user friendly for everyone.”

During the public comment section, residents, particularly from South Norwalk, asked how they could be involved to make sure that their issues, such as heights of buildings in their neighborhood and contractor yards, were heard.

“I would certainly love to make sure I am among those people (involved) and people from my district because we are in an area of Norwalk that is being greatly impacted by some of these zoning regulations that are outdated,” Sonia Oliver, of District B, said.

Jacquen Jordan-Byron, also of South Norwalk, said that she would like to see “more regulations on the height of new buildings in the South Norwalk area as well as curbing the expansion of contractor yards.”

“We have big trucks coming in and out of our residential neighborhoods,” she said, citing the problems with the contractor yards. “We want to make sure those concerns are put and considered into the new zoning plans.”

Other residents, including one who did not give his name, said that they wanted to make sure this was “about Norwalk.”

Wright apologized and said that he wasn’t clear enough because the goal is to make sure that this is for and about the community.

“You all are the experts on this place in the way that we never can be and you are a part of the team,” he said. “Our focus is, first and foremost, on the citizens.”

Members of the Harbor Management Commission including John Pinto and John Romano said that they wanted to be involved in the process to protect the waterfront that many listed as what they like about Norwalk.

“We have a charge within our commission to make sure our water is protected a, and b that development is done according to the Harbor Management Plan,” they said. “We are very pro-development, but under certain guidelines.”

Other residents raised questions about the cost to live in the city. One resident, Sarah Johnson, asked about the percentage of teachers, police officers, and firefighters who can’t afford to live in the city due to rising housing costs and developers building expensive apartment units. 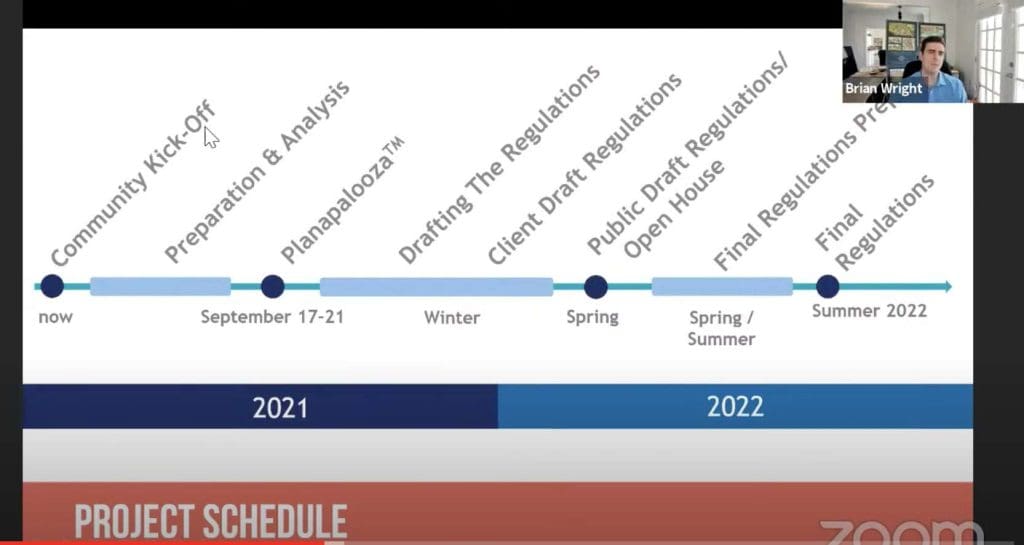 Wright said that some initial goals that his team has heard from people about what they want the zoning regulations update to do include:

Between now and the Plan-a-palooza, Wright and his team are doing their own research to learn more about the city and capturing public input on their website: zonenorwalk.com

After the initial public event, they will put together draft regulations which will be presented to the public for another round of feedback, with a goal of having the regulations ready for summer 2022.

For anyone who’s interested, Brian did mention that his firm has some influences from the Strong Towns Approach: https://www.strongtowns.org/

The key insight of Strong Towns is the need for incremental change by making lots of “small bets”. When we try to eliminate all change, only the most vulnerable areas get targeted for it, and it happens in unpleasant leaps and bounds, like is currently being done in SoNo. But when change comes from the bottom up – homeowners building ADUs, or how Washington Street was built building-by-building over 100 years ago – it’s more sustainable.

Look, I’m no more a fan of those ugly luxury towers than anyone else. But we also have a housing crisis. We *need* more capacity. As the saying goes, “The Rent Is Too Damn High”. Mandates, rent controls, and carveouts *just don’t work*, and they pit us all against the market. Making it nearly impossible for anyone to build on their own property, doesn’t stop the big developers from running roughshod, but rather makes it so that they’re the only ones with the lawyers and the time to get anything done. These big developers are extracting wealth from us, one megadeal at a time, when Norwalkers could be the ones cashing in on their hard-earned property with ADUs and the like.

Let’s think BIG in this process, by starting LITTLE. It’d be a tragedy for this whole fight to just be a rehash of the same battles that got us to this dystopian point with our dying downtowns and murderous rents.

Regarding Sarah Johnson’s comments about Teachers/Firefighters/Police not being able to afford Norwalk. — All one needs to do is look at the annual salaries published to know her statement is totally untrue. Those professionals don’t live in Norwalk because they prefer to live elsewhere NOT because they can’t afford Norwalk. There are people that can’t afford our city, but it’s certainly not those named.

Price comes down to supply & demand for everything including rent.

The current corrupt system only counts apartments as affordable if they are under direct or indirect government control.

“Naturally occurring” affordable apartments that are cheap based upon the rent actually count as too expensive in the current system.

Who would know that?

The current zoning rules discourage if not out right prohibit new “naturally occurring” apartments from being built.

Hopefully much of this changes…

I remember the days when I needed affordable housing. I had a one room in West Haven and got up at 5 a.m. every day to drive to Stamford so one day I could afford to live down here. Affordable housing is a racket for the politically connected and until people realize it we will continue to be fleeced. Besides making political donors filthy rich, government has done more to make housing unaffordable by distorting markets and creating artificial price floors. Roodner Court one bedrooms start at $1600 and go up to over $3000 a month last I checked. We pay that subsidy even though they are maintained as if they are $800 apartments. This allows the Avalons to charge even more.

Circular Driveways. Norwalk has these crazy rules yet they will let 20 people cram into a house but if you want a circular driveway they say no.