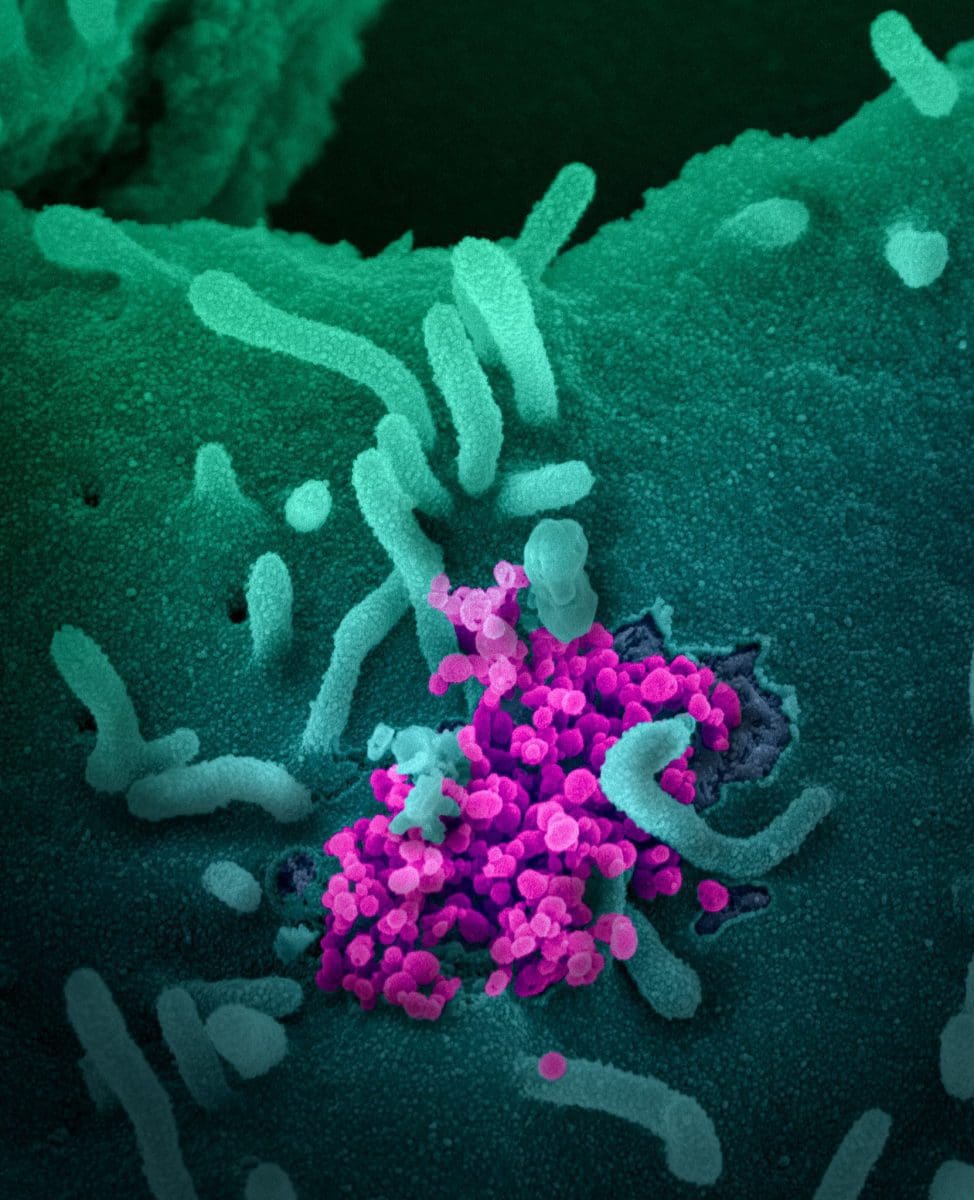 This scanning electron microscope image shows SARS-CoV-2 (round magenta objects) emerging from the surface of cells cultured in the lab. SARS-CoV-2, also known as 2019-nCoV, is the virus that causes COVID-19. The virus shown was isolated from a patient in the U.S. (Courtesy of National Institute of Allergy and Infectious Diseases {NIAID}.)

NORWALK, Conn. – More than a dozen Norwalk residents and legislators tuned into a virtual discussion on Monday night to learn more about COVID-19, also known as the coronavirus.

Kimberly Yousey-Hindes, an epidemiologist with the Connecticut Emerging Infections Program, shared her knowledge with the listeners to provide scientific information about the virus, its effects on the population, how it is transmitted, and what people can do to try and slow the spread down. State Senate Majority Leader Bob Duff (D-25) and State Rep. Lucy Dathan (D-142) also participated.

The conversation was organized by Norwalk resident Justin Matley, who has put together a “Discuss Norwalk” group that aims to bring people together through conversations.

Yousey-Hindes said she has worked primarily with the surveillance of cases of flu, but now she’s been “doing same kind of surveillance for people who end up in the hospital with the new coronavirus.”

“I follow-up on cases that are hospitalized with their coronavirus infection or their influenza infection,” she said. “We collect information about what drugs are used to treat these patients… that’s how we can learn whether it’s working or not.”

If you’re thinking we’ve lived through influenza epidemics before, or SARS, she had context for you to consider.

“SARS was another coronavirus, SARS by comparison was more deadly, but not as easy to transmit. COVID-19 seems to be very transmissible. SARS was not—we’re very lucky. Mainly it was healthcare spread. There were (hotspots in) Hong Kong, Toronto…and the public health measures were able to put the kybosh on that and we haven’t seen SARS since 2004. That’s very different than what we have now. We’re well, well, well past the total number of SARS cases,” she explained.

“H1N1–that’s an influenza A virus, different kind of virus, it was a pandemic. Lucky for us in 2009, the H1N1 pandemic, was not as deadly, not as hard on the population as the current coronavirus pandemic is,” she said.

Yousey-Hindes, along with Duff and Dathan, said that most important thing individuals can do is play their role in social distancing to help “flatten the curve” and keep hospitals and health care systems from getting overwhelmed.

“Flatten the curve—it means that we’re going to spread out when the infections happen so that it’s only a few people who are sick at a time which is exactly what our healthcare and hospitals can handle,” she said.

This doesn’t mean that people won’t get sick, Yousey-Hindes cautioned, but that there won’t be a “peak” or “wave” of people pouring into a hospital that will overwhelm the system.

“With this one, being a brand new (disease) that no one has any preexisting immunity to—if everyone gets sick all at once, we don’t have the healthcare resources to deal with that,” she said. “When the peak happens really depends on us. We may be able to see how well that plays out. It’s sort of a great big natural experiment to see how well these implementation measures are carried out.”

Yousey-Hindes credited Dr. Anthony Fauci, of the National Institute of Health, with providing the public with accurate information, while saying that other areas of government could have followed his lead.

“There’s various branches doing various things—sometimes it seems like they’re in competition with each other,” she said. “(Dr.) Anthony Fauci—I would trust anything that comes out of him. It’s so great that we have him at the National Institutes of Health (NIH). NIH is doing great.”

She cautioned people to make sure they were getting their information from reliable sources, such as the Centers for Disease Control or NIH, because sometimes media outlets can “sensationalize” their reporting.

Throughout the conversation, Yousey-Hindes cautioned that a lot of this was “unprecedented” because the virus is so new, so it’s not always helpful to compare it to the flu or other pandemics, like H1N1 from 2009.

While the virus might have similar symptoms to the flu, such as a fever and cough, on a big picture level, “it seems like the data is showing that this virus is more deadly to a population than influenza is,” she said.

On a local and state level, Duff praised both Mayor Harry Rilling’s decision to shut down City Hall, as well as Gov. Ned Lamont’s steps to limit social interaction and try to limit the spread of the virus.

“The health and safety of our citizenry is of the utmost importance—this is an unprecedented event around the country,” Duff said, adding it was also unprecedented globally.

He said that the legislature would be working to extend deadline for loans for small businesses and provide other economic assistance in conjunction with the federal government once they got more of a handle on this public health crisis.

“We’re all concerned about the economy and the disruptions to families,” he said. “It’s terrible and it’s unprecedented and it’s one that we’re going to all have to get our arms around.”

Locally, Dathan said that the Norwalk emergency management team, which consists of representatives from police, fire, EMS, the schools, the city, and others, including Norwalk Hospital, have been meeting weekly to under the crisis.

“I’m hoping that we’ll get some information when that sort of comes live,” she said.

Matley, the organizer of the event, said his wife works as a nurse at Norwalk Hospital and he praised all the health care workers and first responders for helping to address this virus.

“They’re on the frontlines here and we wouldn’t have a chance if it weren’t for all these people giving their time and energy,” he said.

Matley said that resources discussed from the conversation would be made available to the public online so they could learn more.

Yousey-Hindes is affiliated with the Yale University but was not speaking for Yale, Matley said.

For anyone interested, here is the link to the full chat.

– What can we expect in the coming weeks and months?
– What’s the media getting right or wrong?
– What sources can we trust?
– What preexisting conditions could affect the virus?
– What are the recent comparable situations?
– What could happen in the summer/fall?
– What’s this “flattening the curve” thing?
– What’s the state government recommending going forward?
– How can I get help for my small business?

Also, please consult these fine resources noted in the call:

Thank you Justin for putting these talks together. I felt it was very informative. Stay healthy!