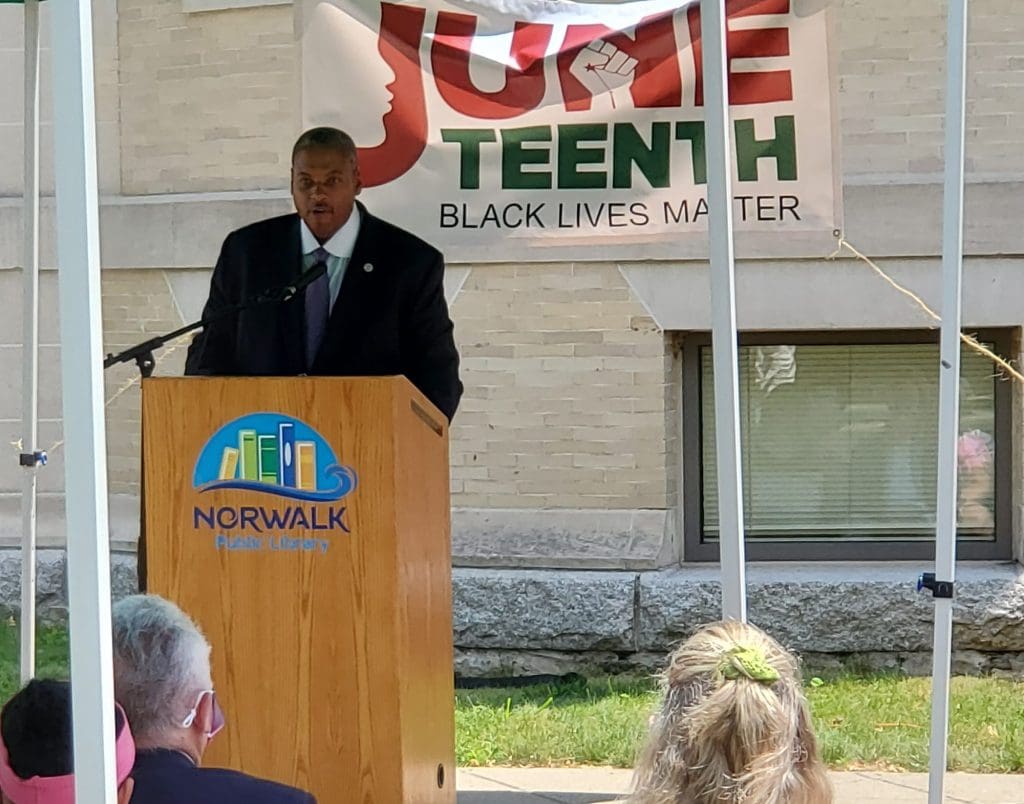 NORWALK, Conn. – Juneteenth has been celebrated in Norwalk for more than a decade, Norwalk Branch NAACP President Brenda Penn-Williams said. Its declaration as a federal holiday is “a wonderful thing, should have years ago.”

Others said it’s a joyous occasion but there’s more work to be done.

“Juneteenth is the oldest nationally celebrated commemoration recognizing the end of slavery in the United States. This year marks the 156-year anniversary of what some refer to as Freedom Day,” Burnett said. “I believe coming together as a community provides an opportunity to remember, to celebrate, and to reflect on the many contributions that African Americans have made to the American culture.”

“Confederate General Robert E. Lee had surrendered at Appomattox Court House two months earlier in Virginia, but slavery had remained relatively unaffected in Texas—until U.S. General Gordon Granger stood on Texas soil and read General Orders No. 3: ‘The people of Texas are informed that, in accordance with a proclamation from the Executive of the United States, all slaves are free,’” History.com states.

Former Norwalk Board of Education Chairman Mike Lyons, now a South Carolina resident, left a comment on this website Wednesday pointing out that slavery continued legally in Kentucky and Delaware for six months after Granger’s arrival ended the practice in Texas.

“Juneteenth did not mean immediate freedom for everyone,” USA Today reports. “Enslaved people in Native American territories had to wait another year for freedom. And despite the legal end of slavery, white Southerners swiftly enacted racist laws, called ‘Black Codes,’ that restricted Black people’s freedom for decades to come … Slavery existed in two border states, Delaware and Kentucky, for nearly six months after Juneteenth because their state legislatures rejected the Thirteenth Amendment after it was passed by Congress in January 1865.”

“Some may question why Juneteenth is significant,” Burnett wrote Tuesday. “It is significant because it is a historical event, one which is not often taught or communicated to the community. A recent poll indicated that over 50% of Americans knew very little or nothing at all about the importance of Juneteenth. This is an opportunity to educate all residents on the importance and significance of Juneteenth. Everyone should indeed celebrate historic milestones of freedom. If we don’t celebrate, we can lose hope and faith.”

Penn-Williams said there were celebrations all over Norwalk. She didn’t go as it’s been just six months since her husband died suddenly, and she’s “still in my way.”

“I think it’s definitely an exciting thing to have Juneteenth recognized as a Federal Holiday; but, I feel it’s a nice symbolic victory instead of tangible effective change,” he said Tuesday in an email. “A holiday is fun, and to be recognized is great, but as a community we have had numerous symbolic victories, when what we need is real change. The Black Community still faces racism, and inequalities in all facets of their lives, and until we are ready to face the real issues and work towards true progress, it’s hard to celebrate these symbolic victories.”

A disc jockey on a public radio station noted the Juneteenth in a celebratory way and told Black people to “keep putting the pressure on,” seeking change.

Asked about that, Sead said, “If the feeling is ‘don’t let up’ I think this can definitely be a motivation to keep pushing forward; however, a lot of times these moments get advertised as a huge win, and a symbol that change has arrived.”

“I don’t want to be a Debbie Downer, but I think it’s important for activist, politicians, and leaders to remember that our work isn’t done. To make the Black Community Whole, from years of unjust policies, and laws, drastic changes needs to be made to close the wage gap, education gap, and gap in home ownership.

“This is great, and I look forward to working to bring a Juneteenth Parade and festival to Norwalk, but this is a sign that change CAN come, but the change we need is not here yet.”

A Black Norwalker who declined to be identified said the words of Areva Bell Martin, a nationally recognized public speaker and attorney who she described as an acquaintance, “sums up how we are feeling about it right now.”

Martin advocated for reparations and said, “Symbolism is nice, but real substantive action is needed to dismantle racism and address centuries of inhumane treatment and economic inequalities caused by chattel slavery.”

“The substantive changes needed to protect voting rights, truth in education, safety, reform policing and the prison system, equal protection, economic equity, access to health care and generational wealth are lost in the symbolism. So today, for us, it feels joyous while at the same time disingenuous. That said, all of the current turmoil signals hope for us, because it means the discourse can lead to those substantive changes. I feel the pushback to progress are mere musket shots from a dying cohort of racist hold outs, soon to be in the rearview mirror. How soon, many decades, a millennium? Who knows.

“In our household growing up it was felt that we live in the greatest country in the world. Despite that, we don’t all reap the benefits of being the greatest… so it is a happy celebration – cautiously grounded in the reality/and a reminder that in a certain way enslavement was/is still in practice in a modern form and that we have to overcome the racist structures that hold us back.

“The Feds made a symbolic action that may bring some sorely needed attention to the fore for the masses, but it does little to impact BIPOCs. Do essential workers get it off, unlikely. More w8t folks will benefit from a long weekend than will Blacks.”

Burnett said he is “elated by the recent approval of the U.S. House, Senate, and President Biden to make Juneteenth a federal holiday and it will be appropriately named Juneteenth National Independence Day. We cannot make advancements in the future if we do not recognize the injustices of the past. The approval of the federal holiday moves us closer to the true meaning of what America stands for…. liberty and justice for all.”

I agree with Jalin Sead. However, it needs to be pointed out that the education gap needs to be closed before wage and homeownership gaps are closed. One might argue school choice would hope close this gap. Yet, why isn’t the NAACP fighting for more school choice or charter schools? Why are the candidates they endorse not advocating on this? Parents would sign up for a school like All Saints in a second if they had the opportunity. There aren’t enough desks at Columbus school for those who want to attend. Why is that? I would recommend that Black leaders take a hard look at the history of their endorsements and compare those choices with the lack of progress they view. I would further argue that they’ve been sold an educational program that doesn’t work for them. — Take discipline in the schools for instance. I would bet my life if there was a referendum on better discipline and accountability in schools the Black community would overwhelmingly vote for it. BUT, for some reason those that control the power levers on the Board of Ed would rather push policies that don’t work and blame racism for their failures.
The more I think about it the more I think I’m right. But then again, it should be noted that my wife tells me I think too much.

Systemic racism and educating people of the significance of Juneteenth is something that requires all people to engage and be engaged. It is not up to blacks to educate whites. I agree that educational opportunities are vital for solid meaningful change.

I agree with John O’Neill. Change begins at home. Who you vote for locally has a major impact on your life. A great education is not school based, God gives us all common sense, time to use it. Find out what your elected officials stand for before you elect them. Big changes are coming and an educated electorate is needed.

What does “real change” mean? What “drastic changes” are needed to “close the wage gap, education gap, and gap in home ownership.”?

The local education system is required by law to give everyone an educational opportunity, black, Hispanic, white, Asian, legal student or not.

Slavery existed for centuries and still exists in modern form which is harsh. What can people do to improve it these days?

I too agree with John O’Niell.

Closing the wage gap begins with education. I would add that education begins at home.