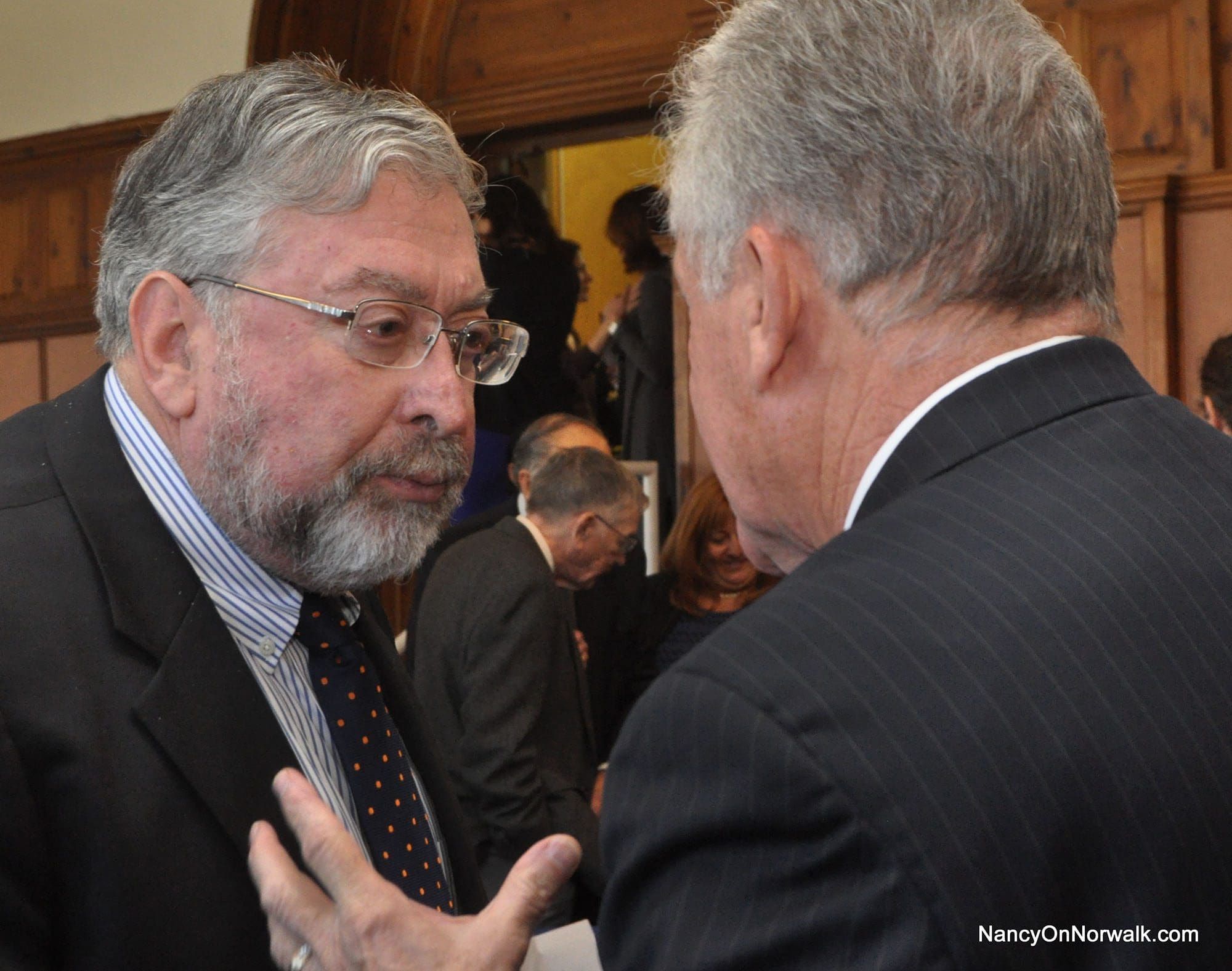 “The plaintiffs’ case is based in part on the proposition that the ECS formula is an arbitrary and irrational formula. It is not based on any systematic evaluation either of how students are able to meet the state’s expectations of, for example, achievement, test scores and so on, and that there was very little if any appropriate research done to determine how much to weight different factors when devising the formula,” Knopp said, in providing an update on the lawsuit Connecticut Coalition for Justice in Educational Funding (CCJEF) versus Rell.

Knopp was one of the original mayors to sign onto the case, but was voted out of office in 2005 before Norwalk contributed to the prosecution of it financially. Former Mayor Richard Moccia declined to sign onto the case, saying that he felt it inappropriate for a Republican mayor to sue a Republican governor.  When Democratic Gov. Dannel Malloy replaced Rell, Norwalk began paying the $15,000 a year to support CCJEF; that has continued under Mayor Harry Rilling, a Democrat suing a member of his own party.

Rilling is on the CCJEF steering committee.

“Stamford and Norwalk are the cities most severely underfunded under the ESC formula,” Rilling said in an email. “While every mayor from Stamford and Norwalk, as well as legislative delegates from both cities, have attempted to change this, no progress has been made.  The lawsuit is our hope right now.”

In fact, both Rilling and Knopp have, in the past, called the case Norwalk’s “best chance” for seeing a significant change.

Presentation of CCJEF’s case began in January and continued to March 4; there was a three-week recess and the state began its defense on March 30. Knopp said he expects this to take about four weeks, and then CCJEF will present rebuttal witnesses.

“That may take upwards of two weeks to conclude depending on how the plaintiffs’ attorneys view the strength of the states’ argument,” he said.

Knopp said he is not involved in the day-to-day courtroom litigation, which is being handled by the New York law firm Debevoise & Plimpton LLP, with the assistance of Yale Law School students. Knopp is a visiting clinical lecturer at the school and co-teaches the Legislative Advocacy Clinic and the Education Adequacy Clinic, according to his rèsumé.

“I do monitor developments in the case based on my teaching position and law school in support of the law students who are working with Debevoise,” Knopp said. “Of course, I have deep interest in the case as one of the mayors that originally brought case in 2005.”

When the courtroom battle is over, “The judge has by statute 120 days to issue a written opinion, but that time can be extended if both sides were to agree. We are not expecting a decision in the case much before the end of the calendar year,” Knopp said.

The case has a special status because, in 2010, the Connecticut Supreme Court ruled that that state constitution guarantees the right for an adequate education for all students and that the state has obligation to provide it, Knopp said.

The case was sent back down to a new trial judge, not the judge who had ruled that the state did not have that obligation, he said.

“I think everyone expects the judge’s opinion to be very comprehensive, given the nature of the referral from the Supreme Court to determine whether or not this significant state education duty is being fulfilled,” Knopp said.

While politicians routinely complain that the ECS is based too heavily on property values and not enough on median income and other factors of poverty, Knopp’s description of the legal argument goes into educational data.

“One of the reasons each side is presenting expert testimony from school finance experts is to provide an analytical framework for evaluating actual evidence about the ECS formula and whether it has been properly devised and funded,” Knopp said.

One factor of the formula is the cost of educating a child who is growing up in poverty, he said.

“How do you determine that factor? Is it one third more than an average middle class student? Is it double the cost of that student? Is it 75 percent? That research was never done,” Knopp said.

Another variable educational cost factor is the cost of educating a student who does not speak English, he said.

“What additional resources does a district like Norwalk need, when you are talking about 30 or 40 different foreign languages being spoken in the schools?” Knopp asked.

“The plaintiff’s position is that in fact, the ECS formula is more of a politically based formula rather than one arrived at in research-based evidence on actual costs to educate students, especially in the urban district,” Knopp said.

These arguments are laid out in CCJEF’s proposed finding of facts, updated for the court on March 9. ECS “is arbitrary, is not the result of a rational design process, and is not based on the actual cost to educate students in Connecticut,” the statement asserts.

Norwalk and Stamford are not mentioned in the proposed statement.

“Even though Norwalk might not be specifically mentioned, we are very much a part of the process,” Rilling said.

The state also has a proposed statement of fact.

There are reform programs, the state says.

“The Alliance District program poured well over an additional $400 million into the 30 lowest performing districts alone in the last 3 fiscal years, an unprecedented increase in resources in such a short period of time for those districts,” the statement says.

Norwalk gets about $1.5 million in Alliance funding.

High school graduation rates are improving in Connecticut, according to the state:

How is the court case going?

“It’s never a good idea for anyone involved in the case to discuss its progress during the case presentation so I really can’t comment other than to say that my observation is the plaintiffs case has been presented very well and now we will see what the state has to say in response,” Knopp said.

He will talk about a unique facet of such a large trial.

“It’s been an extraordinary challenge of courtroom organization to present the over 700 exhibits and organize the many witnesses and legal briefs, so having a major law firm like Debevoise has been essential to the successful presentation of the initial case by the plaintiffs,” Knopp said. “In my view, they have done extraordinary job. The courtroom is a marvel of technology. The parties are able to call up any exhibit from the several hundreds that have been filed and view them almost instantaneously on a flat screen monitor… it’s been really remarkable to watch the presentation of a major case going in.”

Thanks, NoN, for a very informative article. This should provide substantive answers to the folks who often ask, “why doesn’t someone just sue the state?”

Very glad that the case in support of ECS reform has been put forward so effectively. Thanks to former Mayor Knopp for his role!

First: Is the Mayor fully in support of this? And I would like to thank former Mayor Knopp for continuing this fight!

Second: Is the ENTIRE Norwalk Delegation in support of this lawsuit?? We know that Fred and Gail are! Where are the rest?

Third: What possible defense could the State have for screwing Norwalk for all of these years? And will the State put up any sort of defense considering Malloy had an ECS Task Force a few years ago make strong recommendations to changing the ECS Formula that were thrown out in the Education Committee.

Fourth: Assuming the Judge will rule in our favor and I can’t see how he wouldn’t, will the State Appeal or accept the verdict as is. If there isn’t an appeal will ECS FINALLY once and for all get changed in the next legislative session?

Fifth: I doubt this can be answered but after the verdict will there be a committee to fully implement the changes so ordered and who will be on that committee and will parents involved in the school system from organizations like the PTOC be able to serve on the committee?

I’m sure there are a lot more questions and a little ways to go with this case. However, this looks like it is finally going to happen!!! It’s been a long fight and one that isn’t over yet but the end is near and the end result will benefit our Great City and most of all our CHILDREN!!!

Where’s the State Senate Majority Leader Bob Duff on this matter? Why hasn’t Bob supported a change in the ECS? Can you call Bob and find out where he is on the matter? After all, isn’t Senator Duff supposed to support his constituents in Norwalk? I very much look forward to reading your follow- up article on where Bob and the rest of our elected state officials stand on this very important issue.
Thanks

There are two stories we ran in March that address the mayor’s and the senator’s positions on ECS. Both include the actions taken by Rep. Wilms on the matter. Please read, or re-read them.

For the Duff comments (mostly near the end of the story), click here.

Our takeaway from these and other stories and conversations NoN has had:

1. Rep. Wilms has lived up to his pre-campaign promise to push on ECS, but, for various reasons, has had no luck.

2. Sen. Duff agrees the ECS is unfair but has the experience and institutional knowledge to see that his colleagues, many of whom would LOSE money in their districts if the formula were changed, are likely to not be supportive of a change, thus the suit and finding “other ways” to bring funds back is more realistic.

3. The mayor has said many times he supports a change, and, since becoming more familiar with the process after his pre-first term promise to spend a lot of time in Hartford fighting for change fell flat, has echoed Duff’s feelings. The mayor has strongly supported the lawsuit and says he would actively support efforts by Rep. Wilms.

It’s a real shame other districts that have been living high on the hog while we have had to cut millions out of the budget! Hold on I need go get a tissue…NOT! I’m so not sorry his colleagues in other districts would loose there funding and once and for all a FAIR ECS formula would be enacted. Life is really tough sometimes! Welcome to Norwalk enjoy what we have been experiencing not being funded properly for the last number of years!

Duff has been too busy raising taxes, fighting for casinos that aren’t in his district, supporting the Looney senator he bows down to, and giving state employees everything they ever wanted at the expense of taxpayers. He doesn’t have time to actually fight for his taxpaying constituents.

@Drewt, “What possible defense could the State have for screwing Norwalk for all of these years?”
The state’s defense is that property values are a valid indicator of a municipality’s wealth or lack thereof. Since Norwalk has fairly high property values, this should mean (a) Norwalk is able to levy enough tax money to fund its schools and (b) Norwalk schools therefore need relatively little money from the state.
I am not saying the state is right; that is just the defense argument.