NORWALK, Conn. – While other cities are reinventing themselves, Norwalk only needed to be understood, said the chief strategy officer of the South Norwalk firm that designed the city’s new logo bearing the slogan “The Sound of Connecticut.”

“The diverse offerings of Norwalk were so immense,” Gary Seve Esposito of the Zunda Group continued, “it became a little bit of a daunting task to say so much in one slogan, in one logo, in one program.” 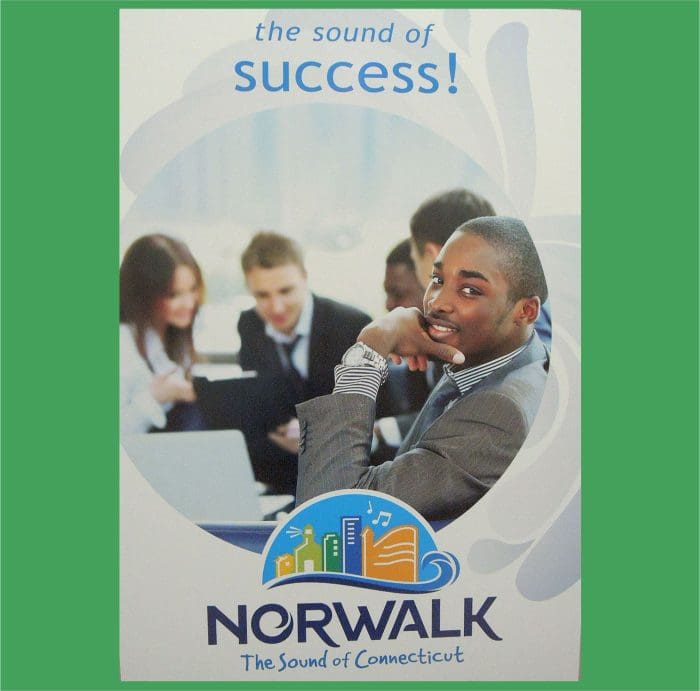 Surrounded by members of his firm and residents and city employees on the steering committee that oversaw and approved the new design, Esposito assisted Mayor Harry W. Rilling Thursday morning in unveiling Norwalk’s new brand at a news conference outside the Common Council chamber in City Hall.

“We have a little bit of everything to offer,” said Rilling admiring the new logo. “It’s designed to get people excited about Norwalk.”

From the time the Zunda Group came on board until the new logo came to fruition took about 10 months, Rilling said.

Elizabeth Stocker, the city’s economic development director, who served on the steering committee, said the group went through “40-50-60 designs” before reaching agreement on the one selected.

The new logo is fitting for Norwalk. I like the simple design and that it includes the recognizable Maritime Center, a lighthouse and a wave. The double entendre/word play concept with the use of the word “Sound” is a clever and catchy. Well done!

I will admit I was nervous before this was announced, as our great diverse city is pretty hard to define easily.

The moment I saw it I just said wow, this is great! It is a friendly, happy image, and a winner for Norwalk that has so many great stories and opportunities to share.

Congratulations to Liz Stocker, Mayor Rilling, the Zunda Group, and everyone who worked on this.

A Norwalk high school pulled a 33.3 and another two schools were on the list of the worst in Ct,Sounds have become an issue, in fact noise pollution seems to be an all time high where it appears in Norwalk police log daily as complaints.The sound of music has become an issue but where is the laws concerning this invasive way quality of life is effected by establishments providing entertainment.

Norwalk is forever changing ,nightly calls are for loud noises along the RR tracks and the large amount of diesel driven equipment supporting a large worker base of over a 100 MTA rail workers nightly.Maybe this was a job for one of our State House reps to clearly define what Norwalk is about to receive a dock yard a rail yard a real mess next to the high end residential living.

It was a great effort to brand the city but seems to fall short of the anticipation of those concerned Norwalk has grown but the city depts haven’t.Norwalk is not friendly any more a quick walk down Woodward ave after sunset tells friendly and happy falls short of that feeling some have of the city.Not all live in South Norwalk who have this feeling the city has missed its true mark. The day branding hit the news Norwalk was told the schools are lacking and sit on a short list of a few hundred schools in Ct that fail.I agree congratulations are in order but to those who endured and watched some those who have a voice in Norwalk make more of a mess while taking victory laps in what most consider is a mistake in leadership.

Homework is not for those scholars who live the real deal in Norwalk its for those who want to run the city as if it was a playground where they brought all the equipment to play with.

The cost of this branding to the taxpayers? priceless.

10 months over 60 designs and nothing was done sounds like our shopping mall,schools,planning,parking,redevelopment depts and bridge work.Maybe thats the brand of Norwalk that we are use to having after all.Maybe it does make sense once you look at the city for whats its worth.