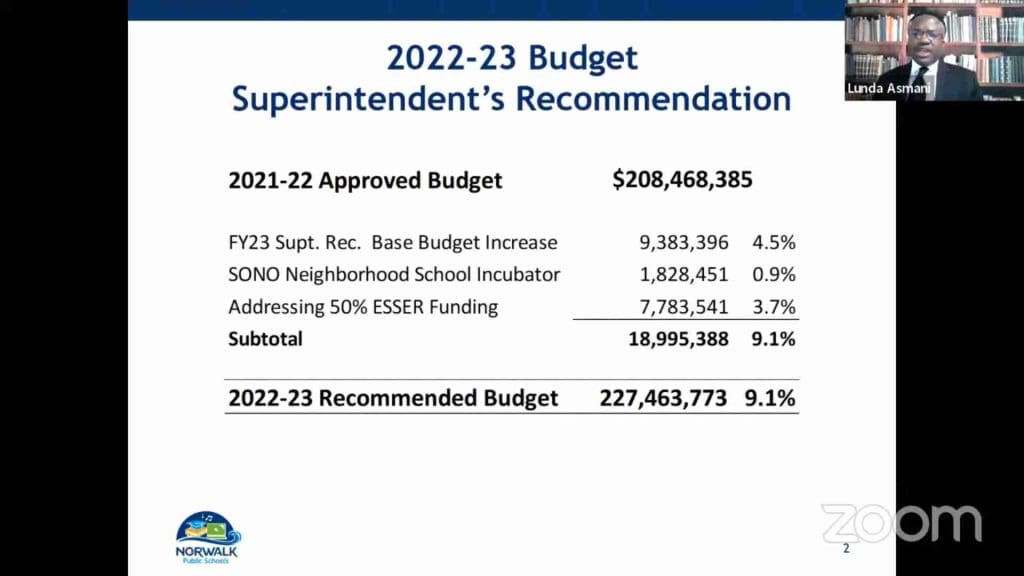 NORWALK, Conn. — Norwalk’s operating budget for the upcoming fiscal year has been finalized and the Board of Education given a 4.5% increase. While there’s a nasty surprise, Mayor Harry Rilling expressed confidence that it can be worked out.

“We’re not unique in this situation,” he said. “… There are a number of cities across the state, and we’ve met with the State to kind of get understanding of how …they were they so wrong in the assumption.”

The issue has been reported on in Kevin Rennie’s blog, Daily Ructions.

“The Connecticut Partnership Plan received a $40 million infusion from the state in December,” Rennie wrote. “Without it, the Plan would have inflicted a 14.5% increase on plan members this year. Members were advised to plan for an 8% increase in their budget deliberations. They were recently told that advice had become inoperative. The cost of coverage would be hiked by 10.5%.”

Asmani, speaking April 26, said the pandemic is a factor in the mistaken estimate, as folks chose not to go into the hospital and there was a delayed demand for elective procedures and other services. He estimated that the City’s damage from the mistake is between $300,000 and $400,000, and advised that the schools budget has not been finalized.

NPS had planned to talk to the City about the requested $1.8 million for funding the SoNo school incubator, which wasn’t factored into the Common Council’s budget cap, but “in discussion with the executive committee, I think $1.6-1.7 million is a big number to fill. And so we’re going to be approaching to have that discussion,” Asmani said.

“At a meeting that Dr. Estrella and I had this week with the Mayor and City’s CFO, we agreed that NPS will draw down the reserve in the Board of Education health insurance fund to cover this gap,” Asmani said Wednesday in a statement. “We have savings available in the health insurance fund from the prior year, and will work throughout the upcoming year to identify efficiencies in the 2022-23 operating budget to make up any additional shortfall.”

Norwalk Chief Financial Officer Henry Dachowitz explained Tuesday that the City used a 8.7% estimate for health care costs in its budget and the school district “used a lower rate.”

“Unfortunately, when we started a process, the initial estimate that we got was 8%,” Asmani said on April 26. “The consultant came back in January, the numbers stayed relatively close to 8%. And think at the time, the CFO looked at these numbers, analyzed history and trend and didn’t feel comfortable to go with that 8% and recommended a number less than 8%. So we went with a proposal of a 6%.”

When Asmani said “the CFO,” he meant the recommendation for a number less than 8% came from the State, NPS Chief of Staff and Communications Brenda Wilcox Williams said Wednesday.

“I was never solicited for a recommendation on the NPS/Board of Ed budget projection for health insurance, nor did I offer one,” Dachowitz wrote in a comment on this article.

The City’s budget shortfall is “moderated by the lower increase for retirees as well as the reserves we have in our Insurance Fund,” Dachowitz said in the email. “We have built up that reserve for City Health Insurance costs over the last few years.”

“We expect the balance to increase slightly at 6/30/22,” Dachowitz wrote. “Consequently we believe the FY23 budgeted amounts for Health Insurance will adequately protect the City in Fiscal Budget Year 2022-2023.”

Rilling said, “Both the City and the NPS have ‘buckets’ of insurance funds. Also, per state statute the City can grant a 2% carryover of funds from one FY to the next. That would be in the area of $4m. Between the two sources they should be able to cover the increased medical costs.”

The budget carryover was previously limited to 1% of a school district’s budget but that’s been increased to 2%, according to Rilling.

“I also told our CFO it was time to look for what other plans might be available,” Rilling wrote.

The Common Council adopted the final City budget during its April 26 meeting, without comment. Documents show that the Board of Estimate and Taxation shaved nearly $750,000 from City budget requests to arrive at a total $196,325,940 2022-23 City operating budget, an increase of nearly $8.2 million.

Regarding Health Insurance – Democrat State Comptroller Kevin Lembo suckered Norwalk into joining State Health Plan An example of a partisan hack being over his head and bringing others down with him. In this case Norwalk. Why did prior NPS. Finance head not do his homework? Might have been a nice guy but he obviously didn’t know insurance from elephants…If this is an example of what’s around the corner financially the next few years will be difficult ones for Norwalk
I’ll know we’re in trouble when Henry Dachowitz leaves or retires. He’s the only grown-up in the room.
In my opinion, our current Norwalk School administration is out of control from head to toe. There is NOT one thing Norwalk School administration is doing that would be construed transparent.
Harry needs to plug the holes before the boat sinks. (See Bridgeport)

This story contains a significant factual error. “Asmani, on April 26, said Dachowitz had recommended a lower number than 8% in January so NPS went with 6%.”

I was never solicited for a recommendation on the NPS/Board of Ed budget projection for health insurance, nor did I offer one. The suggestion that I recommended they use a 6% increase projection when the City was using 8.7% and we both have the same insurance policy makes no sense.

Sadly as in prior years some 70% of our City’s budget will fund our public schools where if past is prologue most grads will continue to fail to meet CT Edu Dept standards or ever secure 4 yr college degrees. And neither our BOE nor highly paid school Supt have any public plans to markedly improve student performance. No wonder we’re becoming a city of renters while homeowners with families seek better venues to educate their children.

As a 28 year taxpaying resident, who has paid close attention to municipal management since day 1, let me express my appreciation for your commitment to this community, and hopefully to your profession.

Please continue to be the financial guardian for the Norwalk shareholders, that so far – you appear to be. My only gripe is your abstinence on the Bob Duff High boondoggle, but I respect your desire to remain employed.

From a whole bunch of people – thank you Henry.