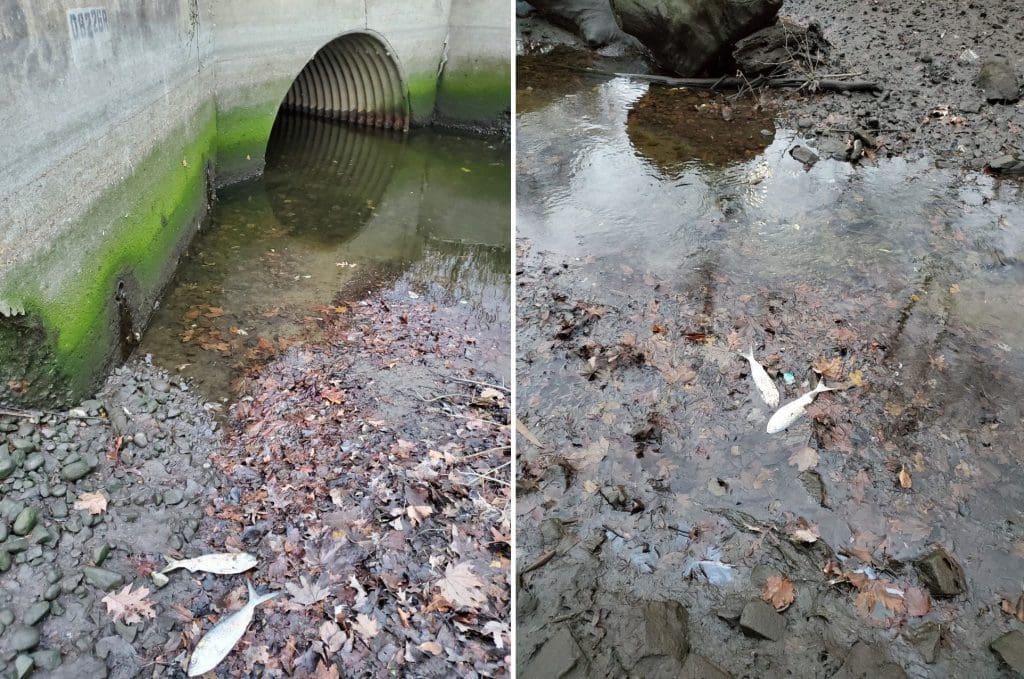 NORWALK, Conn. — Dead fish collecting along Norwalk waters may be connected to climate change, a Save the Sound expert said.  “Basically, we had a gigantic number of Menhaden in Long Island Sound this fall.  One theory is that many of the fish missed a migration cue, which may have been due to warmer temperatures,” wrote Bill Lucey, Long Island Soundkeeper for the environmental watchdog organization.

NancyOnNorwalk was alerted to the fish kill by South Norwalk resident John Flynn, who reported “rainbow slime” and “hundreds” of dead foot-long fish under the Oyster Shell Park pedestrian bridge. It wasn’t red tide or low oxygen in the water, he said, explaining that “red tide smells terrible.”

They’re menhaden, commonly referred to as “bunker,” and low oxygen is probably the culprit, Mayor’s Water Quality Committee Chairman Joe Schnierlein said Sunday. It’s been going on for a few weeks as there is a large school of menhaden around Oyster Shell Park.

“When the tide comes in, many of them swim up into the channel that is there, possibly trying to get to the fresh water coming out of the pipe that has fresh water in it which can hold more oxygen,” he wrote. “You get so many of them in such little water that they use up the oxygen in the water and the weaker ones die.  As they are an oily fish, they can actually see oil on the water on a calm day with a big school.” 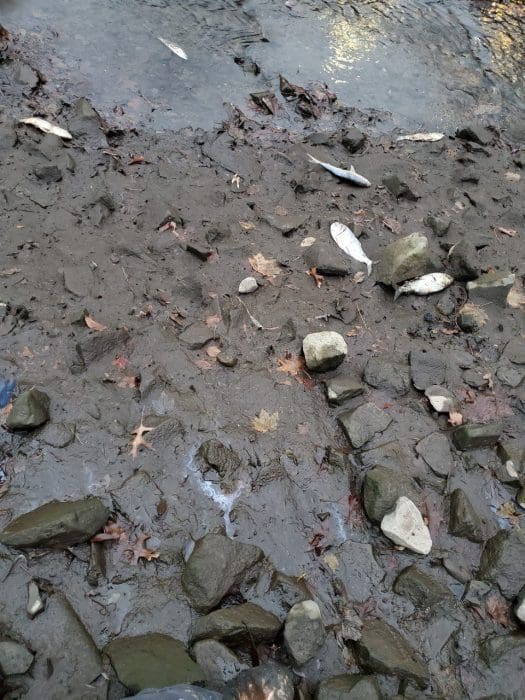 Schnierlein recently said this is a pattern that goes back decades, created by the unique geography of Norwalk harbor.

But Lucey said Thursday that the die-off goes far beyond Norwalk and is likely because of the unusually vast number of menhaden offshore. He had just been in a meeting Connecticut Department of Energy and Environmental Protection (DEEP) officials were queried on the topic, he said, explaining:

“With that many fish in the Sound there could have been an issue with plankton availability as the temperatures got colder so they were not getting enough food and the weaker ones succumbed to both less food and colder water.  Many of the fish have moved out now and headed south.  Traditional spawning grounds in late autumn are typically off the Carolina coasts, but climate is changing and seems to be affecting the normal movements of many species.

“The main takeaway is that menhaden are the most abundant stock out there and they are in excellent shape as far as population size.  Additionally quota reductions and the recent passage of ecosystem based management targets for this species is all geared to increasing the biomass of menhaden for other species such as striped bass and bluefish.  Additionally, species such as eagles, ospreys, whales and seals will benefit to greater prey abundance.

“There have been fish kills seen along the entire CT coastline as well as into New York waters. However, the sheer number that are still swimming around in places like Blackrock Harbor, Bridgeport illustrate pretty clearly that the mortality rate is very low compared to the overall population and the die offs are natural given the environmental conditions. My guess is that we will be seeing more dead fish in the coming days.

“There is a pathology study ongoing with NY DEC {New York State Department of Environmental Conservation} but the results are not yet available.

“Bunker are very oily fish and can leave a sheen on the water.”

DEEP has received and investigated numerous calls of sightings of dead fish along the Connecticut shoreline, from Darien to New London, the agency said in a Tweet. 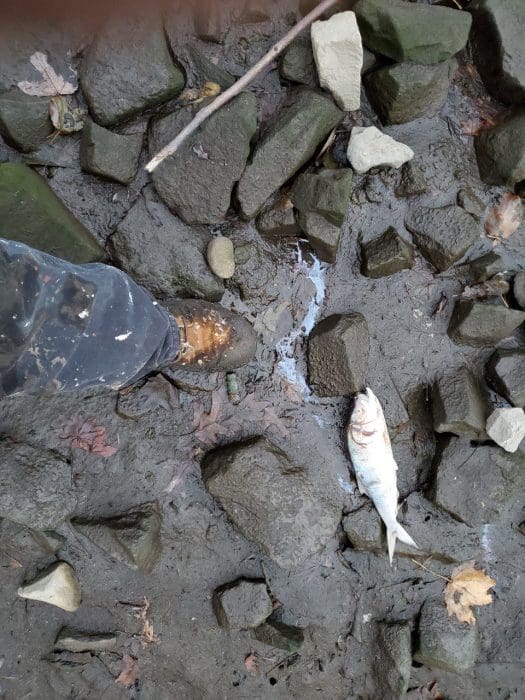 “Menhaden are the most abundant marine fish species on the east coast, and fish kills involving them are not uncommon,” DEEP wrote. “Menhaden fish kills can occur for many reasons, most often due to natural or environmental factors such as school-induced hypoxia or cold water temperature.”

A follow-up Tweet said DEEP continues to investigate and “staff believe the fish kills observed over the past month have been due to more Menhaden overwintering in the Sound, possibly due to a missed migration cue, leading them to succumb to the cold water temperatures and a lack of nourishment.”

As for Norwalk’s characteristics and the longstanding bunker die-offs, Schnierlien recently explained, “The thing that makes the harbor unique is that probably two-thirds of our harbor is mud flat. Because of that, it responds to temperature much more quickly than harbors with deeper water. And when it gets warm, the harbor waters get warm quick. So, oxygen levels plummet. That can dry fish out, or the fish that are here get stuck and they can’t get out.”

NancyOnNorwalk asked Flynn if he had tested the water for oxygen content. He said he hadn’t, “but the city tests for bacteria and nothing else.”

Schnierlien said Norwalk waters are tested for dissolved oxygen, salinity and nitrogen.  He wrote, “What he apparently does not know is the Dept. Of Aquaculture tests here regularly as well DEEP, and the Army Corp of engineers, and this past year the Dept. of Transportation.”

This happened about 20 years ago. You could smell the fish every time you drove over the 95 bridge between exit 15-16.