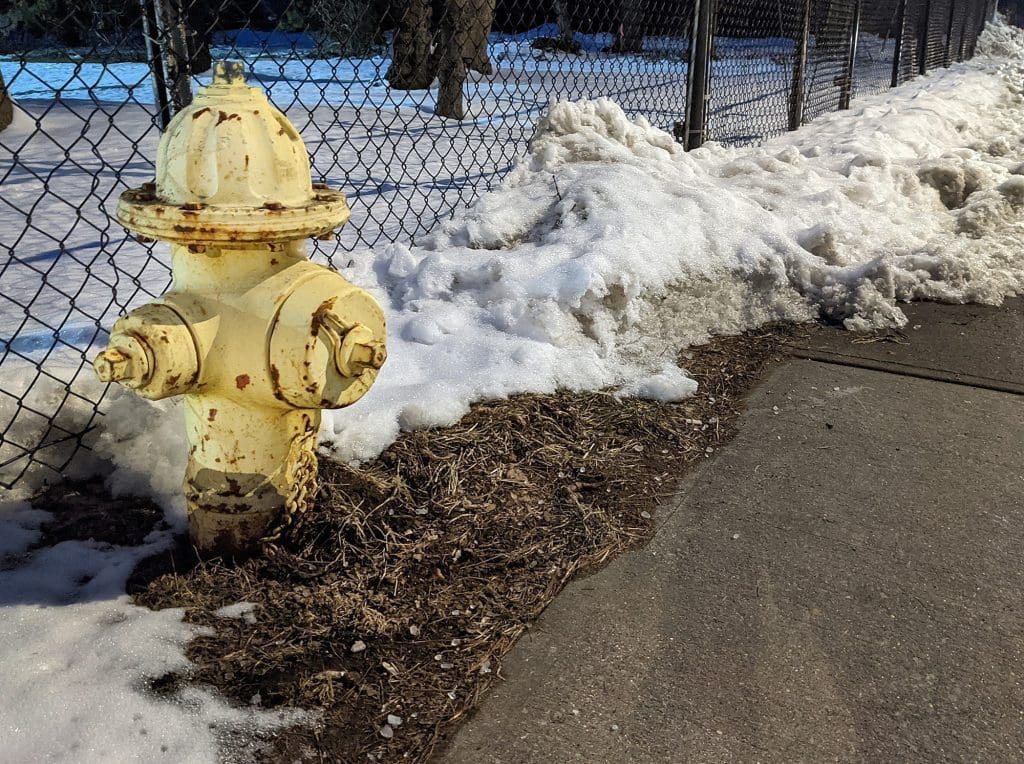 NORWALK, Conn. — Norwalk leaders minding the City’s budgetary Ps and Qs have a new item on their minds: a 240% increase in fire hydrant “rental fees.”

A request for a $71,278 budget transfer to cover a hydrant rental fee recently had Board of Estimate and Taxation Chairman Ed Camacho objecting to “being held hostage” by the water company. And the $71,278 wasn’t the full amount required to cover the charge, it was just the difference between what the Norwalk Fire Department had in its account and what was owed to South Norwalk Electric and Water (SNEW) for the hydrant usage.

Norwalk Fire Chief Gino Gatto explained that the department has access to 886 hydrants owned by the First Taxing District and 589 owned by SNEW. The First District charges $200 a hydrant and SNEW was raising its rate from $84 to $200 because, “I’m sure they don’t want to feel left out.”

Norwalk Chief Financial Officer Henry Dachowitz, at the Feb. 8 BET meeting, jokingly asked if 1TD would instead lower their rate to $89.

“What if we don’t rent the hydrants?” asked Camacho, who had called the issue “a new one on me.” 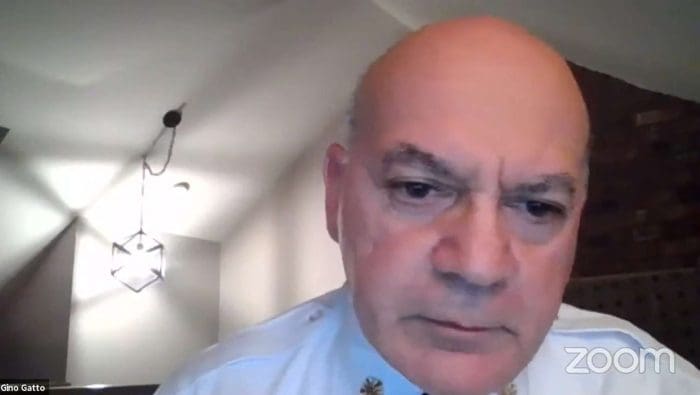 Norwalk Fire Chief Gino Gatto speaks to the Norwalk Board of Estimate and Taxation on Feb. 8.

“If a car smashes into it, I guess it’s on us to get it repaired,” Gatto replied.

“I called around to some of the other Fire Chiefs in our area. And the Greenwich Fire Department is paying $1.2 million a year for their water bill,” Gatto said. “Fairfield has 1,600 hydrants and they’re charged 1.9 million a year.”

“So this is really water usage, but they’re they’re charging it on the basis of hydrants,” Camacho said.

Dachowitz suggested that the relationship be “professionalized” with a contract that “buttons up the details,” because “we just shouldn’t have increases randomly when they choose to, we should have some sort of multi-year pricing in place.”

Plus, water bills are usually charged based on usage, Dachowitz said.

“It sounds like we don’t really know what this charge is all about,” BET member James Frayer said.

“I agree that we need to find out what we’re paying for,” Mayor Harry Rilling said. “I believe some of this is maintenance charges because they are responsible for maintaining the fire hydrants and flushing them out periodically and doing other things. But I think we still ought to look into what the actual charges for and what it’s based on. And I also believe… we should try to see if we can get some sort of a written contractual agreement with them. Because we don’t want to be held hostage as was also mentioned, whereas they can just arbitrarily in without justification, increase the fees that were paid.”

“We’ve been renting fire hydrants as long as I’ve done this job, for 38 years,” Gatto said. “So it’s not a new charge. It’s in the budget every year.”

The BET tabled the item so it could be investigated further.

Gatto brought up the “rental fee” issue in September at a Common Council meeting. At the time, SNEW Chief Executive Officer and General Manager Alan Huth informed NancyOnNorwalk that the Chief was referring to “hydrant fees.”

“Hydrant fees have not been raised in many years and were not representative of current costs, these fees cover the cost of ongoing maintenance or replacement of hydrants when necessary. SNEW raised its fees to match those of First District, and these fees are about 25% less than most other utilities in our area charge neighboring Cities and Towns. SNEW responds promptly whenever we learn of a damaged or broken hydrant,” Huth wrote.

Dachowitz didn’t reply to a September email asking about the fees.

Asked this week about the continuing conversation, First Taxing District General Manager Dominick DiGangi explained that 1TD phased in a corresponding increase in fees. He wrote:

“Until July 1, 2016, The First Taxing District had not raised the Fire Hydrant fees for decades.  At the time, Norwalk was paying $100 per hydrant and New Canaan and Westport were paying $200 per hydrant.  There is no charge for the fire department’s actual water usage.  There are approximately 900 hydrants that have been furnished and maintained by the District with, obviously, most of them within the City of Norwalk.  In FY 2017, the Commissioners approved a plan to adjust the hydrant fees over a four year period going from $100 to $200 in four years, an increase of $25.00 per year.  After July 1, 2020, the fire hydrant fees have been linked to the water consumption increases and range from 3 to 5% depending on what capital projects are being constructed.  The First District fees are in line with other water companies’ hydrant fees.  In fact, Aquarion also charges a fee for the water mains that feed the hydrants.

“Each year, the District inspects each hydrant and performs the necessary maintenance to keep them operational.  Within every water main improvement project all of the existing hydrants are replaced.  Starting in FY 2022, the District will be replacing and upgrading approximately 50 hydrants per year at an estimated cost of $250,000 paid through the District’s Annual Capital Budget.

“A company called the ISO (Insurance Services Office) creates ratings for fire departments and their surrounding communities. According to ISO’s website, the ratings calculate how well-equipped fire departments are to put out fires in that community. The ISO provides this score, often called the ‘ISO fire score,’ to homeowners insurance companies. The insurers then use it to help set homeowners insurance rates. The more well-equipped your fire department is to put out a fire, the less likely your house is to burn down. And that makes your home less risky, and therefore less expensive, to insure.  An ISO fire insurance rating, also referred to as a fire score or Public Protection Classification (PPC), is a score from 1 to 10 that indicates how well-protected your community is by the fire department. In the ISO rating scale, a lower number is better: 1 is the best possible rating, while a 10 means the fire department did not meet the ISO’s minimum requirements.  50% comes from the quality of your local fire department including staffing levels, training and proximity of the firehouse.  40% comes from availability of water supply, including the prevalence of fire hydrants and how much water is available for putting out fires.”

Minutes to a September 2019 Fire Commission meeting show that Norwalk’s ISO score was a “2” at that point.

“Due to the fact that the City’s water is provided through private companies and hydrant issues, that is the highest that the City will be able to score,” the minutes state.

Rilling didn’t reply to a Tuesday email asking for an explanation and an update on the ISO score.

Basset said he had reached out and, “They told me exactly what I assumed they were going to say, you know, their costs of their people to continually do maintenance on the hydrants and upgrade the system, you know, flow testing, getting the data which we need for like for ISO. A personnel cost is included in that.”

“They” replace about 20 hydrants a year in a regular replacement program and “they do not charge us for an assumed volume of water,” Basset said. “…It was very vague. What they actually do, they don’t have anything written down.”

Basset continued, “I did pose the question, ‘if we chose not to pay,’ and it went silent, so that they didn’t, I don’t think they ever had that answer before.”

DiGangi wrote, “It is my hope that the District and the City of Norwalk never have to address “what would happen if the city didn’t pay the fee?”   Perhaps ISO could better answer this question.”

“SNEW is not aware of anyone contacting us on this issue. Our fire hydrant fees were raised to cover costs for maintenance and match existing rates in other parts of Norwalk not covered by SNEW. Our fees had not been adjusted in many years and remain significantly lower than what other neighboring municipalities pay,” Huth said Tuesday.

Basset said he’d spoken to “another water company” that has hydrants in Norwalk and “they were pretty close to saying the same thing on the regular maintenance program, the hydrant flushing program, and so on, and then, you know, the any damage that’s done on a hydrant.”

He hadn’t asked about a contract, he said.

“I think it’s important to have that dialogue about the contract,” Rilling said. “Because as you can see that when they decide to increase fees, it seems like just go ahead and do it. I’d rather have some sort of a guarantee that it’s going to be a fixed costs for a period of time. Even if they go up a certain percentage, every year, 2 or 3% a year, at least we know what’s coming and we can properly budget for it.”

DiGangi wrote, “The First Taxing District Water Department continues to maximize efficiencies to reduce the costs to its customers while meeting its obligations.  Our Commissioners take seriously their duty to protect the interests of the District customers.  We are committed to providing a reliable supply of the highest quality drinking water at the lowest possible rates for today and future generations.  The District is proud to meet the water needs of its customers.  In conclusion, I am confident that this issue, like many other issues in the past, can be resolved in the best interest of both parties since our constituents are one in the same.”