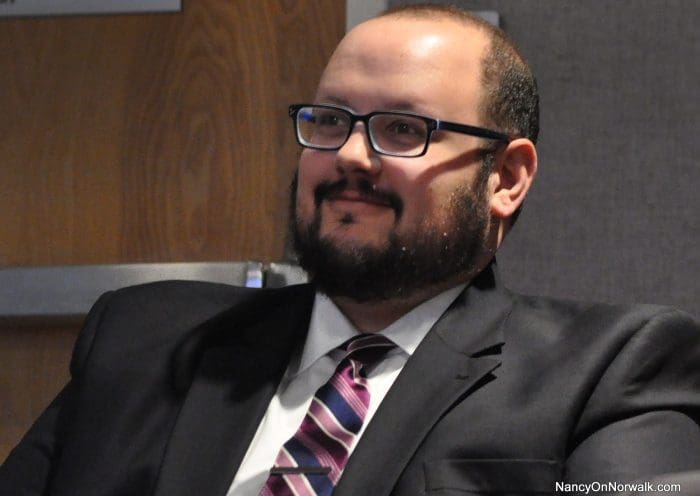 NORWALK, Conn. — Josh Morgan is leaving the City’s employ, nine months after getting a new title denoting more responsibilities and a corresponding pay raise. His exit comes shortly after another puzzle piece fell into place, completing a vision formed a year ago.

“I am forever grateful to Mayor Rilling for offering me this opportunity nearly four years ago. It has been an honor to work alongside him and his team to serve the Norwalk community,” Morgan said. “The pandemic was (and continues to be!) a trying time for us all. It was a great responsibility to work so closely with the Mayor and his COVID-19 response team to make sure the public had accurate and timely information and updates. I am really inspired by how the city and community responded throughout the pandemic.”

Morgan’s position was created nearly four years ago as the first action in Mayor Harry Rilling’s reorganization of administrative positions.

The road to accomplishing that was a little bumpy, with Burney backtracking to say that the grants writer wasn’t being eliminated but rather the duties and title were being changed to add communications responsibilities to the job. Council members greenlighted the changes in February 2018, though some citizens demanded that the city hire a full-time grants writer, not create a role with both responsibilities.

Morgan was never a grants writer but a grants coordinator, Burney said early last year. In agreeing that the role should evolve, Council members lauded Morgan for doing an outstanding job and told Burney that the undefined new grant position should be firmed up ASAP.

In December, Norwalk Chief Financial Officer Henry Dachowitz announced that Rita Nigri was hired to be grants administrator, a part time job. Nigri is a retiree who with grant writing experience who wants “to keep her hands in it.”

And last week, the City advertised for a new communications director.

“Four years ago, I decided the City needed to do a better job communicating with our residents,” Mayor Harry Rilling said. “I created the role of Communications Director and brought Josh on as the first person to hold that role.  Josh has exceeded my expectations in every way. His contribution was never clearer than during the pandemic where he served the critical role of sharing information about case rates, guidance, vaccine clinics, testing opportunities, as well as directing residents to food and other resources. The City is better for his time here. I wish Josh the best of luck in his new endeavor – the State of Connecticut is lucky to have him.”

Morgan said he’s “incredibly proud of what the Mayor and his team have been able to accomplish. I am humbled to have been a part of that effort. I really enjoyed working alongside the Mayor and leadership team, the Common Council, city and school staff, community organizations, and local groups. This was a wonderful experience for me and I am sad to say goodbye. I love Norwalk – the people, places, businesses, and attractions. While I won’t be working for the city after January 28, you can bet you’ll be seeing me around in the future!”

Norwalk Chief of Staff Laoise King wrote, “I am so happy for Josh about his new opportunity and challenge while simultaneously heartbroken for the City and our team. It has been a pleasure to work with Josh.  He is smart, creative, hardworking and kind.  In his time here he has been able to transform the way we interact with residents online and on social media, helped improve our website, including the Mayor’s Dashboard, and was literally invaluable in helping to develop ways to communicate with the public throughout the pandemic. We will miss him.”

Wishing you all the best, Josh! It has been a pleasure working with you. Thank you for all the exposure you helped the Tree Advisory Committee get! I will PM you.
Erica

A City Communications Director has an increased role in a City where we no longer have a traditional widely read local newspaper to disseminate local information. We’re increasingly dependent upon Nancy’s to provide our local information/discussion menu. In in our increasingly interconnected hi-tech web and social media directed world we’ve lost our traditional corporate sponsored access to local news and information. And become dependent upon locally run/sponsored sources like Nancy’s to stay out of the dark.