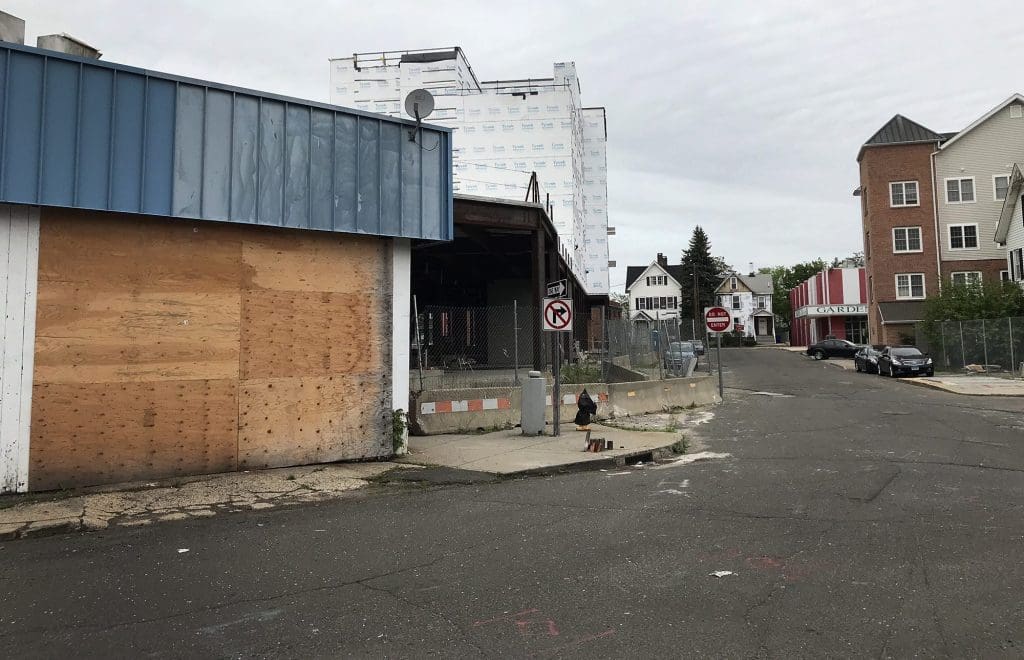 NORWALK, Conn. — John Dias claims to have been damaged by the Wall Street Place project and is suing both the City and the Norwalk Redevelopment Agency.

Dias claims to have been damaged because his property was slated for eminent domain if he could not agree on a purchase price with POKO Partners, the developer selected by the city to build Wall Street Place, a major redevelopment project, in three phases. Dias signed a contract with POKO to sell the property for $2.5 million, but the sale was not completed, the complaint states.

Construction on Wall Street Place Phase I stopped in August 2016, and Citibank foreclosed on POKO.

Dias’ complaint has been amended several times.  An amendment Monday states that the city incorporated the Leonard Street municipal lot into Phase I and that the city and Redevelopment Agency failed to require POKO to provide Dias parking, as required by the LDA.

Former Mayor Bill Collins recently led NancyOnNorwalk to the information that the Zoning Commission in February 2016 allowed POKO to move some of the parking required for Phase I onto property it owned for Phase II.

Dias’ suit objects to the city and Redevelopment Agency allowing “construction on Phase II property” without buying or taking Dias’ property.  The suit also objects to the city’s and Redevelopment Agency’s waivers of LDA violations by POKO, stating, “there has been a destruction or substantial restriction of the beneficial use of the Premises, other than as an asset to the redevelopment project, and the profitability of the Premises has been greatly reduced.”

The suit claims that the city and Redevelopment Agency had an obligation to protect Dias after POKO’s default and acquire the property, stating, “The acts of the defendant…. are sufficient to equate to a taking of plaintiff, DIAS’ Premises within the meaning of Article 1st, Section 11 of the Connecticut Constitution, and the 5th Amendment of the U.S. Constitution.”

Responses from the City and the Redevelopment Agency were filed in May and feature many uses of the phrase, “Plaintiff is left to his proof” regarding allegations, which the Connecticut Judicial Branch Law Libraries states is viewed by the courts as a denial. There are also many outright denials.

The city and Redevelopment Agency state that by failing to hold POKO to its contractual obligations to buy the property in 2008 and 2009, Dias is barred from asserting the claims for which he seeks relief. They also assert that Dias’ claim lacks merit because he has failed to join the “indispensable parties” of POKO and Citibank, and “by his years of silence and inaction” has waived his rights.

Dias did not challenge the Wall Street Redevelopment Plan or its modifications, the LDA, the Conceptual Master Site Plan, the beginning of construction, the extensions to timelines, or the incorporation of Phase II property into Phase I, or the discontinuance/abandonment of the Isaac Street segment, according to the defendants.

Dias is out of time, the defendants assert, invoking the Doctrine of Laches, which is based on the maxim that, “equity aids the vigilant and not those who slumber on their rights,” according to Lexis Nexis. The defense also states that the applicable statute of limitations has run out.

“The Wall Street Redevelopment Plan has been impacted by intervening events beyond the control of the Defendant Agency which are not and cannot be considered an act of taking by the Defendant Agency,” the Redevelopment Agency’s version of the response states, using language that is similar to the City’s version. “… The Plaintiff’s injuries, if any, have been aggravated as a result of his failure to exercise reasonable due diligence to minimize his claimed damages.”

An April amendment to Dias’ complaint lays out this timeline:

Wait a minute. The sacred LDA has been violated in the past?

The city under Mario Coppola’s leadership is involved in a lawsuit?

This is all so shocking…

We need a new General Counsel. The current out-of-towner is clueless and should go home

What an utter failure. Everyone involved in this sham should take their rightful ownership of the sinking ship.

Mayor Rilling – Please get out of the way. You are a disaster!!!

Rilling is the “Assistant to the Mayor”.

At this point the city should declare eminent domain on the POKO property that they sold/gave away.
How long has this partially finished building been sitting there?

Level the building, pave and plant some grass and plants. Get some parking backs for the businesses that haven’t already died off. This POKO building is an absolute cancer to the neighborhood.

Dimension and perspective are amazing when observing all facets of a “gem”. And oh boy – is this Wall Street POKO development a gem. The more “sides” to the story revealed, the better understood is the complexity of the whole.

Every commenter here is partially correct; Ms. King is the operating mayor, this is a disaster for the entire neighborhood – and our city Redevelopment Agency is the Mr. MaGoo of real estate.

However – the developer Mr. Milligan – has succinctly addressed two major points. The first is – if this LDA is as pliable as SpongeBob – why does Harry feel the need to enforce it with him? How is this a winning hand? Second – and more important – is the “strategy” of corporate counsel. The advice to go to war seems particularly self-serving. More litigation – more billable hours. Since when have hogs volunteered to get on the Atkins diet?

I smell a tipping point. Harry-King is in over his/her head – been there for a while – and it’s becoming more and more obvious. No wonder he/she wants more layers between themselves, and the stench of problems he/she has helped create for this city.

The mayor sits with Himes yesterday obvious its not what some of the city wants, Harry time to seek another job its obvious working for King was in around the 1800s a lot has changed everything but wall st.

Its ok lets get a number from the Norwalk legal team, how many law suits are on the table right now, whether they stick or not its time in court judges have allowed them to proceed .

Edited to remove vulgar language, a violation of the comments policy.
https://www.nancyonnorwalk.com/comment-guidelines/