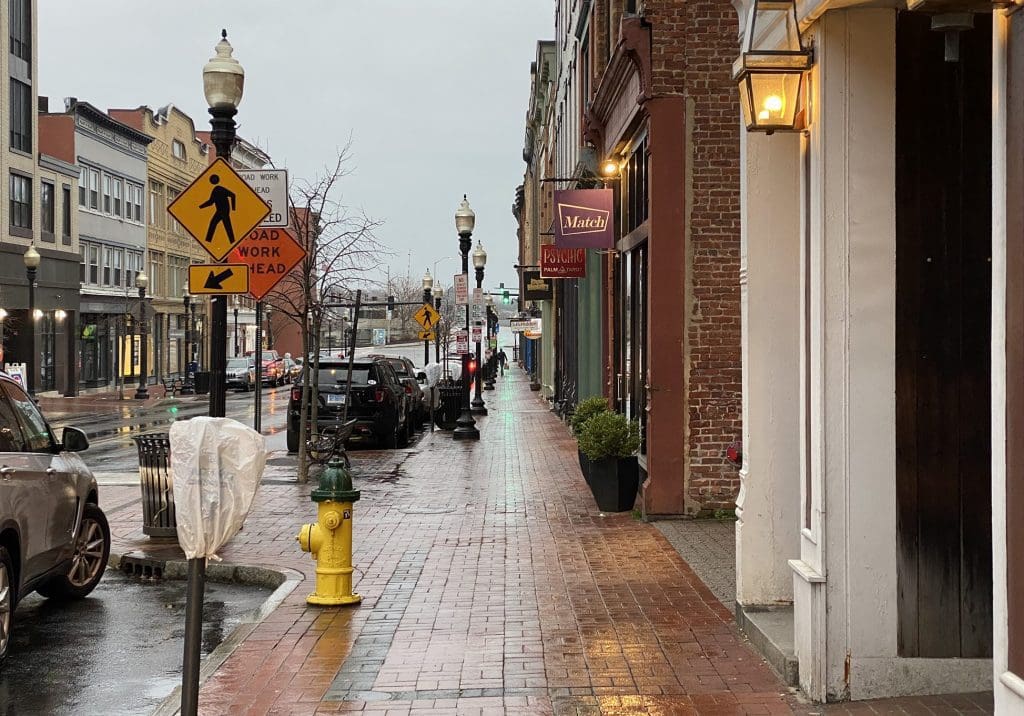 No one on the street, Saturday in SoNo. (Kelly Kultys)

NORWALK, Conn. — On Monday, March 16, the instructors at Work It Fitness on Main Street started their day thinking they would have a full slate of classes.

That’s how quickly the world changed for small businesses across Norwalk, from restaurants to dance studios. As the state government tried to slow the spread of COVID-19, businesses have had to close, move things online, and provide food only through delivery and takeout.

“Our whole restaurant – every dish is put away, now we just have shelves for takeout orders and takeout trays,” said Debbie Spinola, owner of Partners’ Cafe on Cove Avenue. “It was a big adjustment obviously, but as long as everybody stays healthy, we don’t care. We’ll be okay, we’ll rise above it.”

But those changes meant many places have had to let go of some of their employees or alter their schedules and hours. 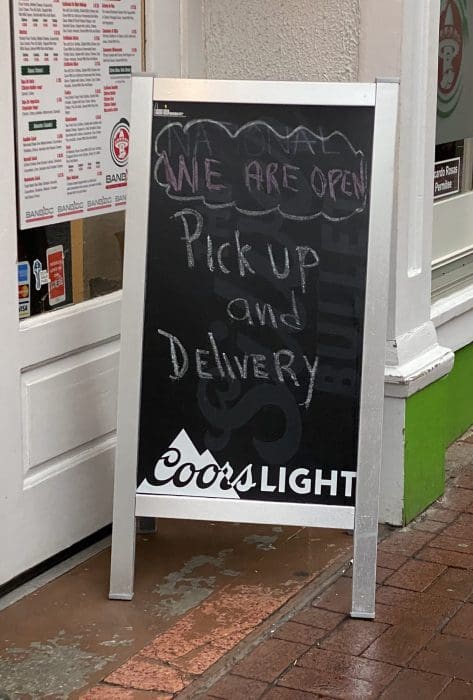 “A lot of restaurants closed, so they put all their employees on unemployment, 0 percent in sales, and others have seen a probably 50 to 80 percent drop if they’re staying open for takeout and delivery only,” said owner Matt Storch of Match on Washington Street, who let some of his staff go. “So that obviously is a giant reduction in staff, not purchasing food from any of our suppliers, so it’s just a vicious ugly circle.”

Spinola said that she had to “cut down her staff immensely.” She said they first offered the option for staff members who wanted to stop working due to concerns over catching the coronavirus.

Dave Kuban, owner of Planet Pizza on Main Avenue, said that he reduced his employees’ hours slightly, but committed to keeping them all on, despite losing $2,000 to $3,000 each day from the lack of dine-in business.

“I promised all my guys I would keep them on,” he said. “All my guys were doing 50 hours a week. I cut them down to 40—just so I don’t have to do the overtime. As I told my wife, we’re blessed. We’ve been busy for most of the year so far, and I told her for the first three months, I’m willing to not take anything out of here and if we have to put a little bit in, we have to put a little bit in to keep everybody at their 40 hours, because right now, I could probably do it with about half the amount of guys that I have, but I just I feel bad.”

Abbruzzese said she shifted to a standard hourly pay for her instructors, who are now doing classes online, instead of basing their pay on the number of people taking the class.

“Obviously, the money isn’t … what it was when they were live classes, and we’re not charging the same as we did … because they’re not getting the individual attention that they did,” she said. “So, it is still a struggle because we still have to figure out our bills. We still have to keep the heat on and the lights on for them to (film the class for online users) and we still have to pay them for their time, so it’s been a real challenge.”

Abbruzzese and others are also concerned about some of the assistance programs structured as loans that will have to be paid back at some point.

“Loans don’t help us to stay open, they only add to the debt that we are already accumulating,” she said. “We also know (our students) aren’t going to spend twice as much when and if they return.  So where is the money supposed to come from to pay back the loan?”

Storch said that when things do start to come “back to normal,” whenever that might be, he’s not sure how willing people will be to start going out again.

“Will it be a party where everybody is just going to go out and love it being free or is it going to be severely restricted, where we’re only going to be able to do 50% of our capacity?” he said. “Are people going to be timid to go out? We really have no idea what’s going to happen.”

Other businesses, such as Strigo Coffee, have had to shift their focus, from working with restaurants and cafes that use their products to focusing on individuals, said owner Dennis Bubbico.

“We’ve been pushing that free local delivery and that way we can come up with gloves on, leave it right on the front porch, and wave—we don’t have to have close contact or anything,” he said. “Everybody’s home, so that’s been more popular, an increase in orders for sure from subscribers that we already (have) …and then also an increase of new customers around town.”

Bubbico said he thinks that increase is due to some people working from home and having more time to try new things.

“It’s all about pivoting and I think being diversified kind of how we are, where we’re not just in restaurants, just in hotels, just in cafes – if we were, then we would have a huge part of our business down – but because we do so much online across the U.S., and then online local delivery and then in the local markets – it’s helped,” he said.

Despite the challenges many of these businesses are facing, they’re committed to giving back.

He partnered with Norwalk Public Schools to deliver two meals a day to children who would normally be receiving free or reduced-price breakfast and lunch, particularly those who aren’t able to meet the drivers from the district-based program that’s delivering food to the bus stops. People donated over $8,800 in five days to start the program, he said.

“We gave them gift cards, and they’re allowed to spend $10 a day and we’re delivering both meals at once, so it could be a ham and cheese sandwich, turkey sandwich and then like a baked ziti or a ziti with meatballs,” he said.

Planet Pizza also dropped the price of its large pie from $16.99 to $10, and people have been paying to donate pies to essential workers.

“People are calling up and donating them to the people that work at Walmart, Stop & Shop, police department, fire department, ambulance, ER, the whole thing like that. So far, we’ve done over 400 pies. People donated over 400 pies,” Kuban said on Friday. “It’s amazing. Today just alone, today we’re up to 70 pies that people donated.”

“They collect funds from any willing and able person obviously and connect those funds to restaurants so we can make meals at a reasonable price,” he said. “And to feed everybody who’s crushing themselves to keep us all healthy. That is ultimately the circle of care that was just a genius idea.”

So far, according to the program’s GoFundMe page, it has delivered over 1,800 meals to healthcare workers across Fairfield County.

Mindful of others in the community who have lost jobs, Partners’ Café has been running daily specials for families, Spinola said.

“We do a daily deal every night for a dinner for four—we try to do every night to make it affordable for people, because we figure even though people are working from home, it’s still jobs lost,” she said.

Ways to Help Out:

Spinola said that she’s grateful for the community’s response.

“The community has been extremely supportive – sometimes I cry just from the people that have, they’ve just been wonderful,” she said. “My husband always felt like giving to the community was important. We just believe in that’s what makes the world go round – community support and being there for your community and it comes back to you.”

All of the small business owners said customers buying takeout meals or signing up for online programs could help them make it through this crisis.

“I’m putting it out there that I’m hoping that people for every two meals they cook at home, they’ll order one out from a local restaurant,” Storch said. “We understand 100 percent that everyone’s livelihoods have been cramped by this. We’re not asking you to come out of your pockets and spend God knows how much money if you can’t do it. If you can do a little, do a little.”

Anyone interested in donating a pie or giving to the school meals program can call Planet Pizza to participate, Kuban said.

Abbruzzese said that each person who signs up for an at-home, virtual class, is helping keep them afloat.

“We’re a mom and pop shop, it’s just my husband and I, that’s running this. We don’t have corporate backing at all, so anytime someone pays to take a class with us, it’s helping to keep another small business in Norwalk alive,” she said.

I wish you had spoken to more people associated with completely shut down businesses or low margin businesses Hair/nail salons, convenience stores, dry cleaners, consignment shops, cleaning services and so many more. The first quarter of the year is generally slow for most small mom & pop types or locally owned businesses and then to go straight into this will mean the end for some. Loans, even forgivable ones, and small government checks won’t be enough. This will lead into a recession most likely. The pain for many is just starting. This is a perfect storm almost unfortunately. Normal seems like a long term idea now. I hope I’m wrong.

Dave is a great guy. I know him personally and he never ceases to amaze me with his kindness.

Nancy, please think about doing a piece on landlords, residential and commercial, to see how they are reacting to this.

Thanks to all the restaurants that are providing meals during the pandemic. We love them and need them.

Hi Babar –
Just a reminder that we are essentially a one-reporter operation – doing the best we can to keep everyone informed. Thank you for the feedback though, it’s helpful to know what kinds of questions our readers are asking during this crazy time. Please keep in touch!

I’m renewing my corona virus chef’s contract for at least another month. Now, if I could only have her also clean up around here, that would be awesome!