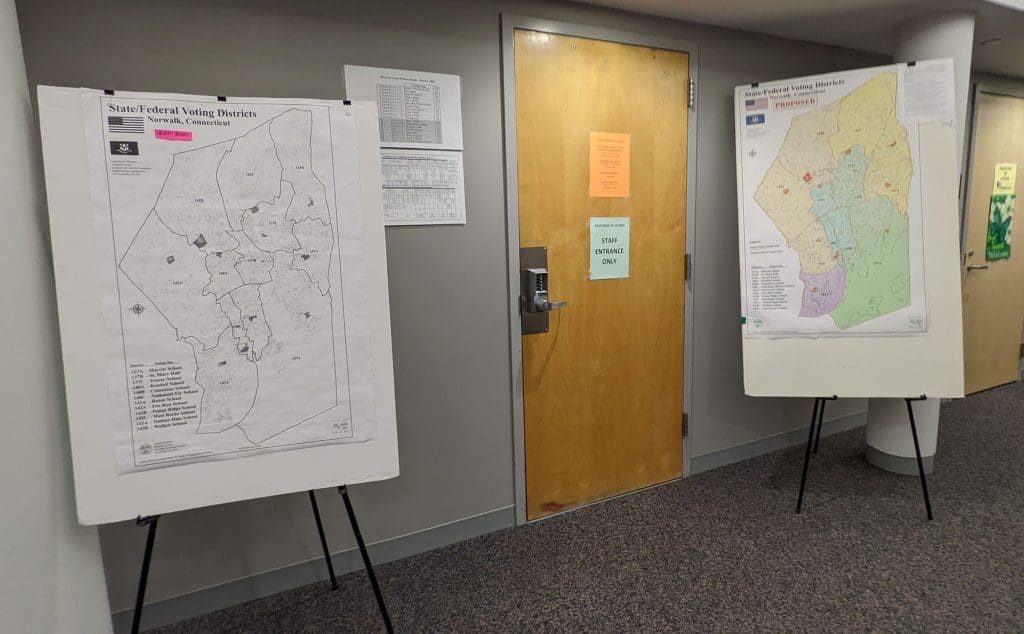 Maps posted outside the Norwalk Registrars of Voters office in City Hall display the old and the new: the 2011-21 state House districts at left and the recently approved version at right.

NORWALK, Conn. — Norwalk’s legislative districts have been rejiggered in response to the latest census, with Common Council members now poised to add an additional voting precinct to the mix.  The new polling place will bring the federal/state elections total to 13, mirroring that of municipal elections.

“What happened basically is Fairfield County’s gained population. We got a new House district, they plunked it down on Wilton, and that left us with the shoving all the other districts around to fit a new district in Wilton,” Norwalk Democratic Registrar Stuart Wells said recently to the Common Council Public Safety & General Government Committee.

Suburban Wilton, represented in the House by a Norwalk Democrat and a New Canaan Republican, sought a divorce from urban Norwalk.

“Norwalk is a large urban city, while Wilton is a suburban small town,” Jennie Wong said in written testimony. “The demographics of Wilton and Norwalk are not comparable, and the interests of Wilton constituents are incompatible with that of the Norwalk constituents.”

Because the legislature approved that request, District 143, now served by Democratic State Rep. Stephanie Thomas, is losing its Wilton component and gaining Norwalk territory to its west that’s been in District 142. Wells called that “the West Rocks area, basically.” 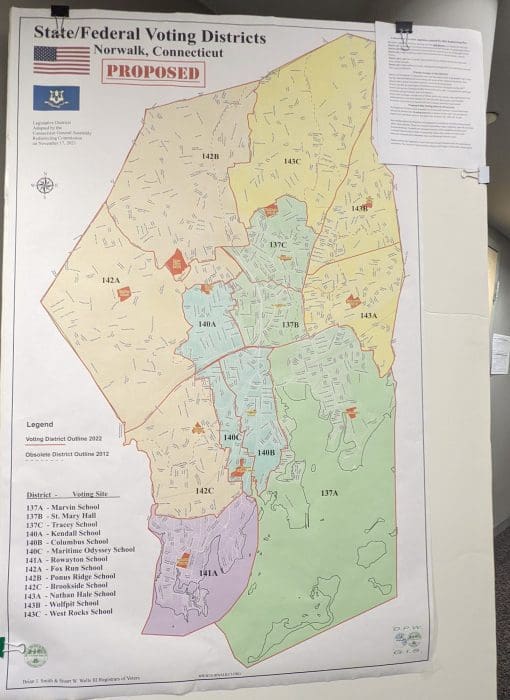 District 143 also picked up area around City Hall and north of Stew Leonard’s, Wells said. It includes part of Westport, as it did previously.

Since 142 is losing territory to 143, it’s gaining part of Rowayton, Wells said. District 142 is currently served by Democratic State Rep. Lucy Dathan, who lives in the New Canaan sliver of the new district.

District 141, served by Republican State Rep. Terri Wood, will have much less Norwalk territory than it did, Wells said.

There are very few changes to District 140, now served by State Rep. Travis Simms, Wells said. District 137, long a stronghold for Democratic State Rep. Chris Perone, “got much smaller, although it’s wholly within Norwalk, meaning it must have gained population.”

Registrars then studied the populations in each district and the possible polling places, to come up with dividing lines for precincts.

The goal was to “keep as many voters as possible voting at the same polling place in Municipal election years as State election years, while maintaining polling places with similar sizes (not too big and not too small) all while not significantly increasing the number of polling places (which would require a significant budget increase for voting equipment, infrastructure, poll workers, and equipment storage),” Wells and Republican Registrar Brian Smith said in a memo to Common Council members.

“Because the 143 is so much bigger, we’re going to need three voting precincts instead of two. The others all had three, except, of course, the 141, which only ever had one. It’s never been very large, we share that district with Darien,” Wells said to the Committee.

“The proposed precinct lines are drawn with a polling place in mind, so, basically, the process is a collaboration,” Smith and Wells wrote.

“The polling places are now pretty well sized, between 3,000 or 5,500 voters approximately, which works well for us in terms of administration,” Wells said. “And then they’re not too large for the city parking lots, the school parking lots, which can also be a problem in these kind of elections.”

Registrars already have the equipment and facilities to handle the changes, Wells said.

“Additionally, the Registrars and the Election Department note that voting issues have become contentious nationally and many changes are being proposed (even some desirable ones},” Wells and Smith wrote. “We are reacting to the new voting environment by trying to provide greater transparency to what we do, hoping that when the public understands the checks and balances built into the voting system in Connecticut they will be less likely to assume that their under-appreciated poll workers and election officials, i.e. their neighbors, are a bunch of crooks. You have seen some of this effort in the Zoom broadcasts from our polling places and from activities at city hall like recounts, etc.”

The registrars would be interested in hearing from voters concerning 1) The possible change of the polling place for Precinct 137B from St. Mary Hall to the Norwalk Library on Belden; 2) Alternative polling places if either or both Columbus School and Nathaniel Ely/Odyssey become unavailable in the future during construction of new schools in or near those buildings; 3) and, of course, any other election matter.
Stuart Wells, Registrar of Voters

Stuart Wells:
Low voter turnout/interest in local elections is no surprise in our One Party transient City where few residents take an active interest in City governance and most are renters. If we’re really interested in increasing voter turnout/interest City officials ought encourage public gatherings where the public can meet the candidates and ask questions. Some of us remember when the auditoriums of our public schools were actively used for that purpose and we had strong turnouts. In a City proud of its pubic schools and local governance. Ultimately we get the City governance our City voters demand. Low voter turnout ought be a wake up call to City leaders.