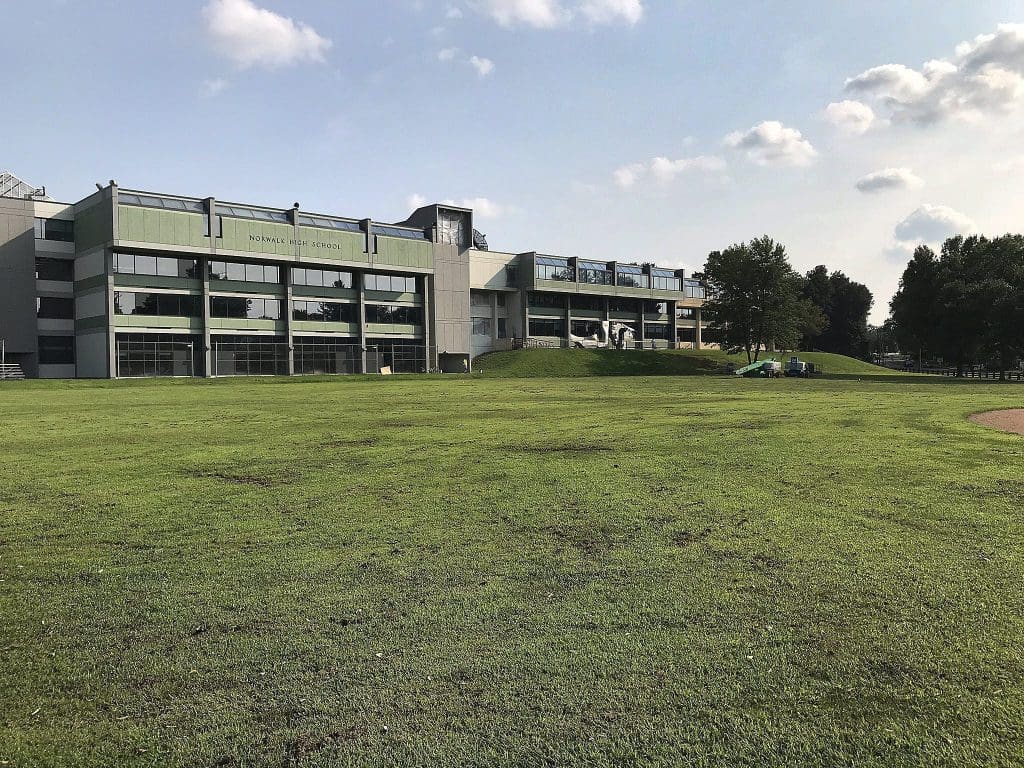 NORWALK, Conn. – For the second time in three days, Norwalk High School students were put into emergency mode due to a “hoax threat.”

At about noon Friday, Norwalk Police got a phone call reporting a student with a weapon at the school, and a “large contingency of police officers responded,” a news release said. “…{I}n coordination with administrators, the school was placed into lockdown. Out of an abundance of caution, Naramake and Nathan Hale, neighboring schools, were placed in lockdown as well.”

Police secured the perimeter, searched the premises and established that “the scene was safe.” Just before 2 p.m., “police and school staff began the release of students in a controlled and systematic manner that would not interfere with the concurrent investigation,” the release said. “All students (approximately 1,900), were released to buses and parents, and walkers were permitted to leave. All backpacks and belongings left behind were searched as part of the ongoing investigation to insure that no weapon remained within the school; there was none found.”

Norwalk Police issued a robocall at about 1:11 p.m. saying that the school was on lockdown but no threat had been found. Norwalk Superintendent of Schools Alexandra Estrella arrived at the school at about 1:30 p.m., scanner traffic indicated. A Stamford Police K9 unit arrived at about the same time.

Norwalk Police were sent to the school at about 9:31 a.m. Wednesday for what they later referred to as a “hoax bomb threat.” The scares come on the heels of a mass shooting Tuesday at a school in Michigan, said to be the deadliest school shooting in the nation since 2018. Four teenagers were killed and seven people were injured.

“The Norwalk Police Department Detective Bureau has assumed the investigation and is partnering with federal law-enforcement agencies in an effort to identify the caller,” the news release said. “The Norwalk Police Department takes this threat to our community very seriously, along with the disruption of our schools and the impact on our community members. We encourage anyone with information about this case contact Detective Ribisl at 203-854-3029 or via email at [email protected]. You may also share information anonymously using one of the three following methods:

Ask anyone involved with NPS on ground level and they’ll tell you behavior and absenteeism is out of control. For years, administration has relaxed standards (juicing that graduation rate up to 95% so the state report card looks good – who cares if the diploma is actually worth anything). They’ve reduced suspensions and expulsions and eliminated Briggs. They figured out how to maximize every number on the state report card so Adamowski could claim Morning in Norwalk and ride off into the sunset (ignoring a slow but consistent decline in SAT scores – which they just blame on bias).

The events at NHS, which I understand include a lot of fighting in the school this week, are a direct result of that approach. The schools are out of control. We need a different answer. Discipline and standards are an important part of any successful education system, and saving NPS requires restoring them. Otherwise the slow steady decline will continue.

Reading the news around the state reveals we are not alone either. Danbury and Hamden suffered issues this week as well. Given that many of these liberal initiatives are incentivized by the state (including my favorite, that you can’t expel kids anymore, you have to move them to an alternative school – so now bad behavior that used to result in expulsion now comes with a price tag In the tens of thousands) this means change has to happen at a higher level than just our local board of ed.

I guess I’m hoping for the backlash to finally start.

@Two Cents — It’s a freaking disgrace. I heard there are more violent fights going on and the finger pointing is beginning. I’ve heard from a veteran teacher that they’ve never seen anything like what’s going on now. Meanwhile back at the ranch, the Board just thinks things are fine. Quite honestly, they will blame the pandemic. The real answer is the mirror. The LA LA land policies of not challenging kids is crushing those kids who they claim to help. They should be ashamed of themselves for what they’ve created. AND it will only get worse… Looking forward to rebuttal from Duffs acolytes. They’ve been suckered and their kids will pay the price.

My 2 cents has confused me. Not sure what his or her rant has to do with the two hoaxes at NHS and the singular ones at Hamden and Danbury . To the best of my knowledge, there’s absolutely no proof that any of these incidents involved a student at any of these schools. It’s possible that all of these incidents were caused by somebody living thousands of miles away. Nonetheless that doesn’t stop Someone who seems to have an agenda from going on a tirade about school discipline.

But restorative practices is the answer right? It’s so true that there are fights and violent behavior going on in the Norwalk Public schools. Norwalk Public schools is out of control, and has gone so far down hill because there are no consequences for bad behavior anymore. The teachers are not being supported, and this is the reason so many are leaving the system. Everything is swept under the rug, and the Central Office leaders down to the administrators are to blame for this. Everything is about making money, looking good for the State with high test scores, being nice, and calm for everybody to see. Teachers are fed up with this stuff, and more are going to be leaving Norwalk. If these problems are not dealt with soon tax payers are also going to see some of the Norwalk Public schools closing because nobody wants to work in a negative, dangerous, and unsupported environment. The Board of Education is to blame for this for highering these so called expert leaders, who don’t care a rat’s tail about the teachers, or the kids. Norwalk Public schools has to be revamped, and quickly. This is my two cents.

I’ve lived in Norwalk a mere twenty years, and there has not been a time, during that period, when it was not said Norwalk schools needed to be reworked, revamped, reorganized, etc. Apparently, in twenty years, there has been no one person nor one group with the vision to make our schools’ excellent learning environments for our kids. In the meantime, taxes go up and up, and, as I understand it, a large portion goes to funding failing schools.
Excuses are made. Data is doctored. The shuffling of blame is discernable. I have no faith in business as usual – including the board and this administration – to actually change the schools for the better. That kids are fighting and “hoaxes” occurring? Just symptoms of how poorly the schools are performing. How low does it have to go before real change takes place? In twenty years, throwing money at it has not worked.