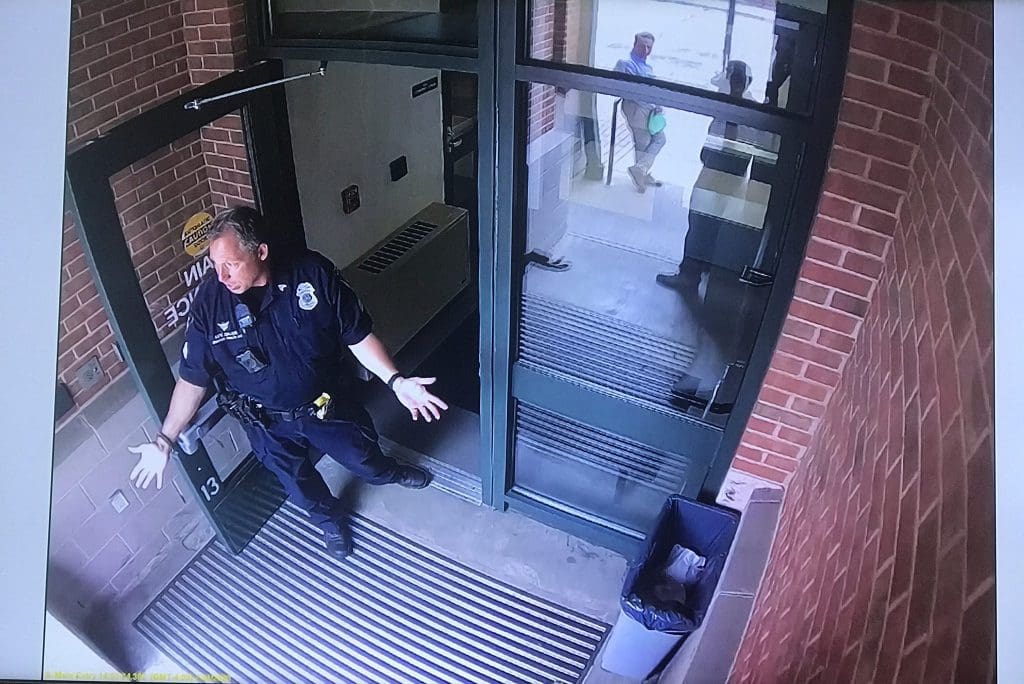 NORWALK, Conn. — Following two alleged incidents of on-duty misconduct by police, including one resulting in the warrant arrest of two officers, the Norwalk Police Dept. is expanding oversight of its sworn personnel.

Included is the addition of a second lieutenant in the Professional Standards Division, in the newly created position of Compliance and Accountability Officer.

The department also will be upgrading a system that identifies and maps the location of patrol vehicles.

Norwalk Police Chief Thomas Kulhawik downplayed the relation between the changes and the recent arrest of two officers.

“We review our policies and procedures on a continuing and ongoing basis,” Kulhawik said. “We review changing laws, new and revised accreditation standards, current events whether here or elsewhere in Connecticut and country as well as network with fellow chiefs to assure we are always maintaining best practices and seeking constant improvement.  When an incident or event occurs, we look at it as an opportunity to look to learn from it and see where improvements can be made. Often when closely looking at process or policies unrelated areas are noted and addressed as well.”

Officers Michael DiMeglio, 38, and Sara Laudano, 31, were arrested Jan. 4 and charged with second degree larceny and reckless endangerment. Laudano was also charged with risk of injury to a child.

Police say they were drinking while on duty Oct. 9 and pretending to respond to calls that were assigned to them. They were found in a hotel room early Oct. 10, still on duty, after Laudano’s patrol SUV was located based on information transmitted by its Automatic Vehicle Locating system (AVL), the affidavit states. DiMeglio’s car was also parked at the hotel, but the AVL was not functional.

None of the department’s changes were “specific and only related to the arrests,” Kulhawik said.

In addition, the department has been investigating its own due to allegations made by State Sen. Bob Duff (D-25), who said he was treated rudely and disrespectfully, spat at and bullied, during a July visit to police headquarters. 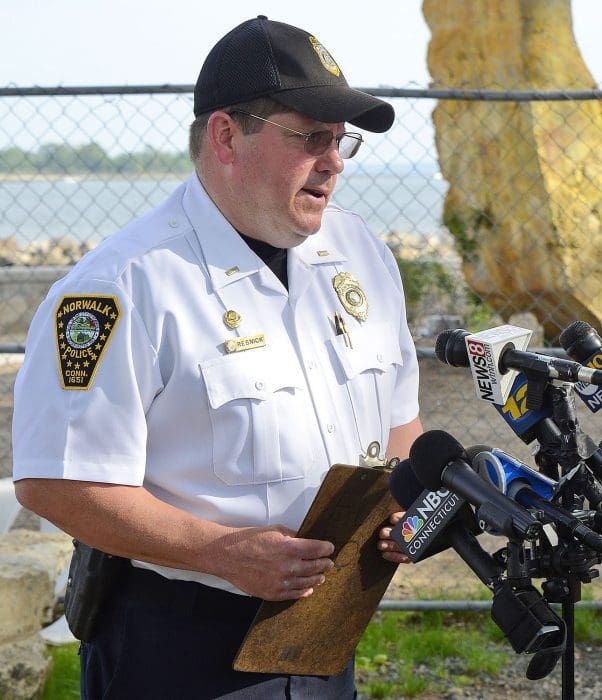 Lt. Paul Resnick, a nearly 38-year member of the department, was appointed Jan 1. to the role of Compliance and Accountability Officer and reports to Deputy Chief Susan Zecca, according to Public Information Officer Lt. Joseph Dinho.

“The compliance position is fulltime and is part of Professional Standards,” Kulhawik said.

Professional Standards is often known as Internal Affairs in other police departments. Lt. Thomas Roncinske is the division’s commander.

Kulhawik said the groundwork for Resnick’s new role was laid in November.

“The Compliance and Accountability position had been in discussion for some time amongst myself and my deputy chiefs, but it required a change in the Table of Organization which was approved by the Police Commission to take effect January 1st.  We felt that the ever increasing demands being placed on the current personnel in Professional Standards required additional personnel,” Kulhawik wrote. “We have seen a large increase in FOI requests in regards to reports as well as body camera video.  With the addition of dash cams coming as result of the Police Accountability Bill we felt it was time to add manpower and at the same time increase oversight and accountability of all operations and technology.”

Kulhawik described this as having been done in plain sight, but you wouldn’t know it. The move was made at the Nov. 18 Police Commission meeting, where “table of organization” was not on the agenda nor was it discussed.

“The Commission approved a Lieutenant promotion which was what was required to change the TO and add the position.  It was on the agenda,” Kulhawik said.

Dinho was promoted to Lieutenant after an executive session, with no comment made, 5.5 weeks after DiMeglio and Laudano were relieved of duty and placed on administrative leave, and an investigation begun.
Police union approval of the new police accountability position is not required, Kulhawik said.

“The Chief and the Commissioners saw fit to make the position and it’s their prerogative,” said Lt. David O’Connor, president of Police Union Local 1727. “They felt the need for it, and we are fine with it.”

Kulhawik said the City is seeking a new vendor for the AVL system that allowed police to track down Laudano on Oct. 10, because there have been “issues.” The department is also looking to buy dash cams for its vehicles as well as technology to marry the dash cams to the body cams every officer wears. This would mean that when one camera comes on, the other one does also.

It’s possible there may be equipment that turns on the cameras when the officer draws a firearm.

“The dash cams are being mandated by law and no change was specific and only related to the arrests,” Kulhawik said.

Kulhawik said the AVL tech is the “one specific issue we found directly related” to the incident involving Laudano and DiMeglio.

“{O}ur current AVL (Automatic Vehicle Location) system was not adequate,” Kulhawik wrote. “Several vehicles were not reporting, however, the system had no way of alerting us to this and only after we began reviewing data did we learn of these various issues. As a result we made some immediate changes/improvements and are working on an upgrade to replace the system.”

Norwalk Police have recently been conducting hourly roll calls via their dispatch radio. These have evolved lately to include officers responding with their location:

Kulhawik said, “We reinstated hourly radio checks during the overnight shift, as we found that due to the Pandemic and bars closed and traffic much lighter during the overnight hours, call volume has decreased.  The checks serve as a way to improve officer safety since radio traffic is so limited.”

Dear Norwalk Board of Police Commissioners,

Your next scheduled public meeting is tomorrow, Monday, January 25, 2021, at 4:15 pm. I will seek to attend, however scheduling conflicts might prevent me from doing so. Regardless, I wish to submit questions for this meeting, and I am hoping you can address these during the designated public comment portion of the meeting.

1. Police Officer Compensation — I’m sure that you all are aware of the January 21, 2021 news report in NancyOnNorwalk.com titled “NPD Officer Ouellette tops list of Norwallk earners for 2020” (https://www.nancyonnorwalk.com/npd-officer-ouellette-tops-list-of-norwalk-earners-for-2020/#comment-283408). I found this news report deeply disturbing for many reasons. Officer Ouellette has rated as the #1, #2, or #3 top city employee ranked by total compensation in each of the last 9 consecutive years. It was hard to imagine that Officer Ouellette could exceed his 2019 compensation of $246,588, but he did. And it is difficult to imagine how one NPD officer could earn $287,000 in a single year without being assigned an extraordinary quantity of hours of overtime and extra duty assignments. Moreover, the top nine of Norwalk’s payroll in 2020 were NPD officers, and more than 2/3’s of the top 25 were NPD officers – with only one of those 17 officers earning (barely) less than $200,000.
– how do these compensation levels compare to other towns in Connecticut?
– How was Officer Ouellette’s 2020 compensation divided between regular pay, overtime, and extra duty? How many hours was Officer Ouellette compensated for in each of those categories? What was the average number of hours Officer Ouellette was paid to work during 2020? Alternatively, if this disclosure is not permitted for some reason, how many hours would an NPD officer have to work during 2020 to earn $287,000?
– What percentage of NPD officers live in Norwalk?
– is there room to improve, or reasons to alter, the NPD’s method of allocating overtime and extra duty assignments?

2. Norwalk Police Union Contract — The contract shown on the city’s website expired on June 30, 2020. Mayor Rilling has indicated that a new contract has been ‘ratified’.
– Is there a new contract? Will it be made available to the public? If the new contract is not yet in effect, are NPD officers working without a current contract, or was the expired contract at some point modified or extended? If the contract was modified or extended, what are those changes?
– the expired contract prohibits any covered employee from working more than 16 hours in a 24 hour period with any combination of regular, OT, or extra duty assignments, except under extraordinary circumstances. Does this clause still allow an officer to work as much as 7 days in a week, 16 hours each day, for a weekly total of 112 hours?
– during 2020 did a superior officer ever bring to the attention of the Chief that there are reasonable grounds for believing that an officer is not fit for duty because he/she has worked excessive overtime and/or extra duty? If yes, approximately how many times? How about 2019?
– during 2020 how many times did a supervisor order an officer to work overtime or extra duty because there were insufficient voluteers for those assignments? How about 2019?

3. Officers DiMeglio and Laudano — Many Norwalkers were surprised to learn of the behavior exhibited by these officers and reported in NancyOnNorwalk.com “Arrested Norwalk Police officers said to be under the influence while on duty” (https://www.nancyonnorwalk.com/arrested-norwalk-police-officers-said-to-be-under-the-influence-while-on-duty/). Both officers consumed alcohol prior to and during their duty assignments, and it appears they took steps which they likely believed would allow them to evade detection by NPD supervisors.
– How often do NPD officers consume alcohol directly before or during work?
– How many vehicles in the NPD fleet are equipped with AVL devices? How many are not equipped with AVL devices? Is there any reason for not all vehicles to be equipped with such devices? Can an AVL device be moved from one vehicle to another, and if so, how easily? Will an officer operating a NPD vehicle know whether it is equipped with an AVL? Why, or why not? How are AVL’s used by NPD supervisors?
– What is the culture and work ethic for NPD officers like? What kind of culture is suggested by the activities of two experienced NPD officers who would drink excessively while on duty, lie to supervisors about their work related activities and duty assignments, and engage in hanky-panky at a local hotel during their shift? How would you reasonably expect Norwalk residents and taxpayers to view this incident?
– in the NPD union contract expired last June 30, what is the reason for providing officers 24 hours notice prior to their scheduled “random drug (or alcohol) testing”?

Thank you for addressing my questions and concerns. And thank you for your service to our city and its residents.

Body Cameras are a Good thing. They will aid NPD deal with false accusations and prove to their antagonists what a great job they actually do…Bodycam footage should be used to show the public all the crap our officers take on a daily basis from those who’ve never been taught how to spell the word RESPECT. I recommend to Chief K a weekly montage of bodycam footage of what officers have to deal with. —
Why not expand Bodycams into school system. We’d get a better understanding of how successful our progressive disciplinary policies have been? Based on what I’m hearing that would be an eye-opener.
Respect and Accountability should go both ways. Or is that too much to ask?

Soooo… the solution to a string of corruption incidents and a clear pattern of financial abuses is to give a career cop a cushy desk job to read emails all day and occasionally lecture people he’s been working with for decades?

Mr Levin asks all the right questions. If an officer makes $45 an hour and is somehow paid $500 an hour for watching a ditch being dug or chaperoning a dance, then good for him or her.

The problem is the numbers just DON’T ADD UP!! All I’m asking for is fair. No amount of body cams or GPS addresses the arithmetic

When can we expect the two officers who were hanging out and partying to be fired? How could police vehicles not have operational GPS systems that work in today’s day of technology? They certainly have a different work standard than others in town