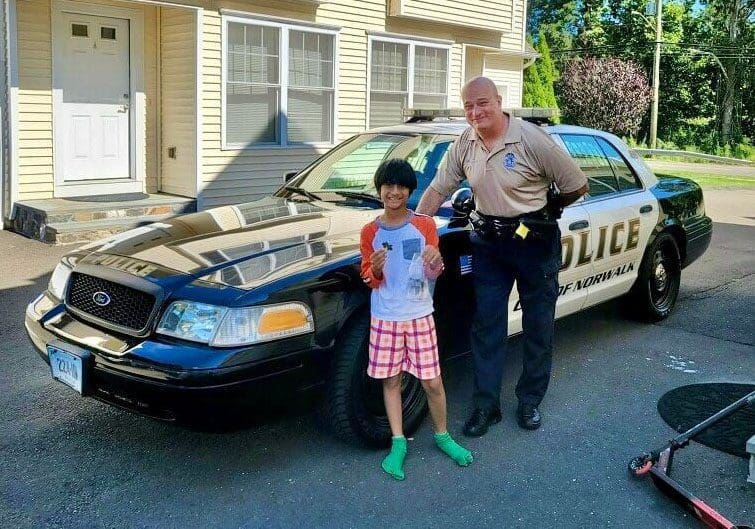 Norwalk Police Officer Cornell Abruzzi with Zidan from Tracey School, in a photo posted to the Facebook page Norwalk, CT SRO Distance Learning. Zidan “is a huge fan of both the police and the military. We hope that this USMA crest magnet may inspire him to possibly strive one day to become a cadet at West Point…!!! 🇺🇸 🇺🇸 🇺🇸 Dream BIG, Zidan…!!!” (Courtesy photo)

The SRO staffing has been cut from eight to three for Norwalk’s 10 public schools and the high schools don’t have dedicated SROs, according to the Rowayton PTA. Kulhawik said everyone is committed to the school resource program, the funding is in place but, “The one issue we’ve been dealing with is staffing shortages.”

Norwalk Superintendent of Schools Alexandra Estrella is set to review the SRO situation at Tuesday’s Board of Education meeting. The Rowayton PTA suggested that parents either email [email protected] or speak to the Board in person or via Zoom.

Rowayton real estate appraiser Nora King, who has two children in Norwalk Public Schools, alerted NancyOnNorwalk to the SRO situation on Sept. 9, saying that her son’s $1,000 cell phone had been stolen at school that day. One of her son’s classmates stole it, she said.

“I am so disgusted with this is what is happening in our schools,” she wrote to Kulhawik. “We encourage this behavior that stealing will be tolerated and our police department pulls our SROs out of school so the principal has to deal with it.  These kids need to learn that stealing is not okay.  The school should be focused on this and educating our kids and stop with equity equity and equity.  You are encouraging these kids that it is okay to steal.  Equity is not some punk kid stealing and getting away with it.  Then the kids that work hard and don’t steal pay the price.  That is not equity.”

Kulhawik told King that SROs were “reassigned to patrol when the schools were closed due to COVID.  However, when schools started this fall, our manpower issues have prevented us from returning all of them back to the schools. It is not a question of funding, it is a question of having officers available to cover patrol and these special assignments.  Unfortunately we have many officers out injured as well as several vacancies that we are working to fill as quickly as possible. We have two officers in field training and hopefully others returning to full duty from injuries and as staffing improves we will seek to return all SRO’s back to their schools.”

“What is Norwalk coming to when we get one excuse after another, and everyone wants to keep blaming Covid for it all.  Our schools need officers there,” King replied.

In July, there were “174 sick days used by sworn personnel and 165 workmen comp days,” Walsh said last week. “Five officers were on extended workman’s comp and three officers on light duty in the month of July.”

“Right now, we’ve had several officers leave the department with retirements and resignations for a variety of reasons,” he said. “And we have a number of officers on extended sick leave workers comp, including two of the resource officers. So because of that, we’re a little short staffed in the schools. But we’re compensating for that. And on a temporary basis, we’ve made adjustments and the school districts been great, hiring additional officers for security and other things.”

It takes time to fill vacancies “because it’s hard to hire and get people back on the street in a quick manner. But we’re working on that,” Kulhawik said.

He’s talked about this before; hiring officers from other departments is a great timesaver because they’re already trained and licensed, he said.

Norwalk hired two officers from Bridgeport in June but they resigned days later after community members objected to their backgrounds. Mario Pericep’s partner, James Boulay, shot and killed 15-year-old Jayson Negron in 2017 while the pair were investigating a stolen car report; Boulay was cleared of charges. The other new Norwalk hire was named as a defendant in a lawsuit after Norwalk hired her.

In response, Kulhawik announced updated background check procedures. And Norwalk would stop administering its own entry-level written tests and would sign up with the Connecticut Police Chiefs Association to be part of coordinated testing, which is done year-round instead of once every two years, as the NPD test has been done.

On Thursday, Kulhawik said, “As soon as we can get people back from workers comp, and people back, you know, hired and back on the street, we’ll get full coverage, that we’ve trained a number of new school resource officers as well as backup. So I’m hopeful that in the near future, we’ll have that back to full capacity.”

King said Tuesday that NPS SROs are “amazing.” She said, “Our SRO officer saved the day and caught the kid and recovered the phone.”

I totally understand about staffing shortages as this is a HUGE problem in the country given the fact the government paid people to stay home. However, maybe instead of having officers sit and give out summons to motorists that go through Railroad Crossings like morons when the gates are down, we have them at the Schools instead.

Who has time to protect kids when there are so many intersections to watch over?

Another total failure of this Mayor and Council who thought it was more important to require policing on all road construction whether it be East Avenue or some cul de sac.

Does anyone else find it amusing AND sad that a key piece of the story above is missing?
Have people already forgotten the effects of the recently passed Police Accountability Law and it’s ramifications? Were the legislators led by our spit-king Bob Duff not made aware of the potential shift away from Police work due to their ill-conceived bill. To those parents of students who praised that piece of legislation without understanding it’s consequences: you were suckered by political emotion and ambition.
I congratulate Chief K for not politicizing this major point for this piece. He certainly could have. He’s a true loyal soldier for our City.
To those parents upset with current security situation: Maybe before blindly pulling the lever on election day you may want to understand who and what you’re voting for.
If NON-Readers think this is bad, this is just the tip of the iceberg. While I feel bad for that kid losing his $1,000 phone, I really believe the stories will only get worse from here. Kids are incredibly clever. If they know they can get away with something, they will. Accountability is lacking in our school system. Until that changes, I recommend leaving the expensive stuff at home.

What is a student doing with a cell phone in school ???? They are in school to learn!! Teaching kids not to steal starts at home!! get your act together!!

Officer Abruzzini is the best argument I know for reinstating SROs to full strength in the schools. However, it is essential to understand that it is more than a matter of increasing the number of SROs. Rather, the right police officers must be assigned to these jobs.

Some police officers are very effective at challenging police work, but not so effective working in the schools. I don’t know Officer Abruzzini’s work as a regular police officer, but he could write the book about how to work with school children, their parents and school staff. He has an approach that I best describe as parental: quick to smile, ready to advise, patient, firm when necessary. Anyone who has observed him knows that the man loves what he does, and he is very effective at it. He helps maintain an atmosphere in which school children feel safe in school, and their parents feel safe sending them to school.

I accept that there must be sufficient police coverage of the city as a whole, but please make rebuilding the SRO program a high priority.

I’m confused what SROs have to do with a kid who lost his cell phone? I also don’t understand what equity has to do with it? Am I missing something from this story?

To John’s point. On or around July 30th I mentioned that 22 Ct. State troopers turned in their papers to resign or retire for the month. I was corrected this weekend. 22 Ct. State troopers turned in their papers that day. I do hope some members of law enforcement can shed some light on these issues before people go to the poles and blindly pull a lever.

Silly to have a SRO at an elementary school . For decades staff handled those matters. A police officer is not going to stop a cell phone from getting stolen. Use the locator button to find the phone. Maybe consider whether a child should have a $1000.00 phone , sometimes kids even lose them. If you suspect a specific child of the theft report it to administration, if they do nothing report it to the police. Be careful you don’t have an agenda

The blue wall of silence exists. I hate to see good cops getting abuse because there are some bad cops, but if those good cops don’t say anything they too are part of the problem. There are some great police officers but sometimes when in groups they develop an us v. them. If 22 cops left the force because they don’t like being held accountable–lets get 22 new cops that can handle it. There is irony when the person in these posts who has made all kinds of claims about police and government misconduct towards himself defends the system to the nth degree when it applies to someone else.

SRO officers are amazing in our schools. It is often the first interaction with children and the police. My children have so much respect for the police due to our SRO officers and they have been present all their lives in the schools. As for my son he worked and earned his cell phone. In the Covid age this is how they manage Power School and google classroom at times and stay in touch with their friends so they are not as isolated. So don’t judge because it is not an attractive quality. The issue with this article is the lack of research on NON because this is not an accurate story and taken out of context.

The SRO’S do so much more then as Tysen said break up fights over blocks and play dough. Like Nora said they are the first interaction a child has in the morning and maybe the last when they leave the building. They offer a sense of security for young kids especially. And maybe if Sandy Hook had an SRO could have prevented that horrible tragedy. Further these heroes are the only safe people some kids could actually trust in their lives. They are also Mentors to a lot of students. They help the students stay out of trouble. They are their friends, counselors, confidantes. They are so so much to the schools. But maybe some of you on here should go walk a mile in their shoes. Maybe they could go handle a situation where a student is getting into fights and bullied because they don’t want to try drugs or join a gang. They are also called for Mental Health issues. So before people like Clueless Bob Duff join the disgusting national narrative about being anti police walk a mile first. Ask an officer what they have to deal with in our schools. We love our officers here in Norwalk and we need and must have our SRO’S!!!