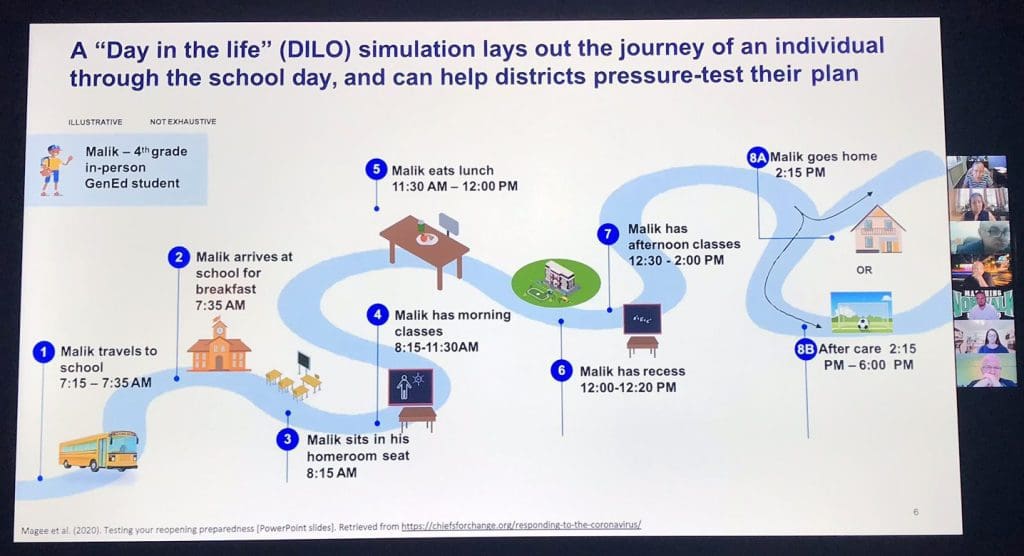 “I’ve had the opportunity to tour several of the schools and every school is in a different place… HEPA filters have been delivered and I was actually Naramake today and they were all being placed in the classrooms. So,” Norwalk Superintendent of Schools Alexandra Estrella said Wednesday during the Reopening Task Force Meeting.

Estrella and members of her staff went on to answer questions on topics ranging from masks to band lessons, ahead of the Sept. 8 school reopening.

Here is a summary:

“I know that masks are required… But what happens if they refuse to wear it?” Norwalk Branch NAACP President Brenda Penn-Williams asked.

“This is something that we’ve talked with our principals about,” Norwalk Public Schools Chief of School Operations Frank Costanzo said. “…I think the first the first step is to be proactive and to spearhead a culture in which all of the adults in the building are working as a team to encourage and reinforce the importance of wearing masks. That culture gets established at the beginning of a school year in the same way a school establish establishes culture around whether or not you wear hats in the hallway.”

NPS has ordered a large supply of surgical masks to “be used for those emergencies when a student has misplaced the mask or soiled a mask in a way that makes it contaminated,” he said.

“If that student continues to not comply, and is a safety risk for themselves and for others, the district would have to move a student you know, to a remote learning experience,” Costanzo said.

Further, “We have plenty of masks, both cloth masks for several different sizes for pre k on up to grade 12. And we have surgical masks and we also have the same for our staff,” NPS Nurse Coordinator JoAnne Malinowski said.

She ordered 15,000 masks and paper bags, because when the kids take mask breaks for recess or for eating, they need a place to store their masks, she said. The paper bags can become art projects.

David Heuvelman asked about “sports masks,” which have vents. Those are the only masks that are unacceptable, Malinowski replied.

“The ear loop mask is the one that we are recommending,” she said. There have been many studies about gaitor masks and bandanas, “but it is still okay to wear in school. We haven’t gotten that addendum that says they cannot wear that. And the reasoning behind that is any facial covering is better than no facial covering.”

She was asked about kids with asthma.

“Most asthma students can wear a mask. … There’s really no reason why you can’t. A person that may not be able to wear a mask is somebody who’s in end stage congestive heart failure,” Malinowski replied.

Students can remove their masks in gym as long as they retain the 6-foot distancing, she said. The key is exposure: if you’re two feet away from someone, you have more exposure than if you’re six feet away.

Chief of Specialized Learning and Student Services Yvette Goorevitch has ordered clear view masks for teachers of young children and Special Education students, so that the kids can see their lips move, Malinowski said.

“When they’re in the hall, how’s that going to work?” Penn-Williams asked.

“The school principals have worked on reopening operating manuals, and in each case, they have done a few things to help ease the congestion in the hallways,” Costanzo replied.

Signage has been put on the floors to direct the flow of traffic, he said.

NPS has also increased the passage times in the middle and high schools, so instead of having five minutes to get from one class to another, they’ll have 10-15 minutes, he said. “And the administrators are going to work with the teachers to stagger those students leaving a classroom and going to another, so that there’ll be fewer numbers of kids in the hallway.”

Norwalk Federation of Teachers President Mary Yordon asked about air quality and “meaningful ventilation,” because “I would be reluctant to be placed in some positions at Norwalk High School or Brien McMahon in the hallway due to the lack of fresh air in those places.”

“It’s not like we’re going to ring a bell and 700 kids are in the hallway. It’s going to be small groups released at any given time,” Brien McMahon High School Principal Scott Hurwitz said.

“The only measure for risk reduction in those hallways is the reduced density, is what I’m hearing,” Yordon said.

“At both high schools, we have huge central systems. While they temper the classrooms, they also temper the hallways. So there is ventilation in the hallways,” NPS Director of Facilities Bill Hodel said.

“We have guidelines for school nurses, guidelines for teachers, when to send a child to the school nurse,” Malinowski said. “We will be giving many of our teachers some Band-Aids and some equipment for their offices…a student, if it’s something very minor, especially for older children, they can wash their own hands with soap and water and put a Band-Aid on it versus coming to the nurse’s office.”

The isolation rooms are 95 percent done and there are partitions to establish the 6-foot social distancing needed, she said. All the nurses have been fit-tested for N95 masks and paraprofessionals will have gowns and regular masks.

“Our isolation rooms are not going to be an infirmary. Basically, it’s a holding area… we ask that parents do pick their child up as soon as possible within 15 to 30 minutes,” Malinowski said.

There’s much training involved because, “We realize that this is a really big deal for everybody,” she said. “These are unprecedented times, you know, and there’s a lot of stress involved, a lot of fear, a lot of worry. So if we can do some education with our staff, maybe we can try and ease that transition to coming back to school.”

Jefferson Elementary will be used for Silvermine fourth and fifth graders, as well as pre-K students from Naramake Elementary School, Estrella said. Two rooms are reserved for Norwalk Early Childhood Center (NECC) in case of an enrollment increase.

“Currently, the entire school and the classrooms in specific have been shampooed as we all know that school proper is fully air conditioned. So the classrooms have been shampooed and we are rearranging the furniture in a social distance formant,” NPS Director of Facilities Bill Hodel said. NPS will test for mold and volatile organic compounds (VOC). “Those samples should be ready for us before the start of school and we want to share that with everybody.”

The administration is not expecting to use the 10 portables behind the school but “We’re doing some arrangements in there with the flooring,” Hodel said.

“Like every other building, they’re going to also have the (HEPA) filters in every classroom, which is another added piece that it’s not required, but it’s something we felt was necessary to continue improving the quality of the air and allow cleaner air to circulate within the building, within the rooms as well,” he said.

Estrella asked the Task Force for an opinion about band activities, because “I have some concerns about aerosol particle distribution when different equipment have been utilized.”

The guidance indicates that “there’s a lot that needs to be done to … music instruments in order to prevent the aerosols,” Director of School Improvement Sandra Faioes said.

Interim Norwalk Public Schools Chief Academic Officer Sandra Kase said the Norwalk Health Department has recommended that band classes and practices be held virtually. This could be done after school, or with in-school students spread out in different rooms and on computers, working with those who have chosen remote learning. But the latter is “hard to do in terms of space that’s hard to do in terms of supervision.”

“We’re living in very unusual times. It would seem to me that it would be a big job to make sure that the instruments were sanitized that students are far apart, in a band situation in school,” Kase said.

“I think there’s a way to rearrange the curriculum,” Yordon said. “There’s a lot to learn when you’re in music. This is a temporary consideration. There are many elements of our curriculum that can actually be exploring different cultural aspects of music, different rhythm, music theory, all kinds of different elements that can be safely taught.”

“In addition, the state guidelines encourage the use of outdoor spaces with tents, and other things that might be done intermittently when weather allows. So I think there’s a lot of ways to do this,” Yordon said.

“To be continued,” Estrella said. “I wanted to start getting the team’s perspective on that piece because it’s a challenge given the current reality that we’re living in and the risks associated with band. Choir is, I believe is a complete no-no. So that will also be something that we have to come up with some alternatives.”

I can answer Brenda. If kids can’t wear a mask and that means over their nose they should be sent home. If the parent can’t teach their child that they wear a mask and yes it does go over the nose then home they should go. I don’t care if they are white, brown, black, pink or purple. Send them home. Period the end. Parents have some responsibility for teaching their kids how to wear a mask.

Nora King, why did you bring up skin color?

Opening schools will be a death sentence for some and the courts will be clogged with lawsuits unless “settled”.
The obsession to open schools to help bring the economy back for Trump is going to be a disaster. I hope that I am wrong but I doubt it.

DryAsABone: Trump definitely wants a stable economy to improve his reelection chances. But remember, the decision to reopen schools in CT was made by our very far left Governor Lamont.

Are The Norwalk Teachers Really Prepared for the 2020 School Year? No Way!

I am a very concerned school teacher in the Norwalk Public Schools, who says to the Parents today that the teachers are not prepared for the upcoming school year with their students. Last week, Central Office sent out a letter stating that the Norwalk Public Schools were up and running and that teachers are well prepared for the upcoming year. Yes! It’s true The schools are up and running well, but the Teachers are not! The Teachers are into their second week of workshops, meetings, and training on technology, and yet nobody knows what the heck is going on. The staff who have a ton of questions on how virtual learning, the curriculum will be conducted, and how the school supplies and students will be protected from Covid-19 germs have been reapetedly been stone walled. Nobody in Central office, or at the schools is answering these questions. The workshops that the teachers have been aattending have not addressed these issues.Teachers are frustrated and angry, and are wondering what is happening. One teacher likened the crisis as a horror show, while others have called it a blankety, blank show. It is not fair to the teachers and especially our students that nobody has been given clear,concise directions. The students think they are coming into a wonderful school year seeing their friends again, but this is not the case. There are a ton of rules, regulations, and restrictions that are going to be placed on them. The teachers desperately want to see and work with their students this year, but not under these disorganized conditions. This is not what the taxpayers of Norwalk are prepared for, and not what students and teachers deserve. Wake up Norwalk Public schools and fix this problem. Make a plan and stick with it.