Wednesday’s Norwalk Board of Education Finance Committee meeting on Zoom.

NORWALK, Conn. — As the students are returning to school, Norwalk Public Schools officially closed out its budget for fiscal year 2021-22 with a very tight finish.

The district’s original budget for the year was $208.4 million and it closed out the year June 30 with expenses totaling $204.4, leaving just over $4 million as the remaining budget to cover 2020-21 items that hadn’t been billed yet, according to Chief Financial Officer Thomas Hamilton.

“​​The board ran a very tight budget this year, we were very tightly balanced, narrowly balanced,” Hamilton said.

Once carryover purchase orders and other expenses are accounted for, about $326,000 was left to be carried over into next year, Hamilton said. Those expenses included a curriculum order made in June and some salary adjustments.

“It would be our recommendation, as the Board has done in the past, to request the City to carry those funds over into a non-lapsing account, which again, as I indicated, is allowed under Connecticut general statute, and that does require approval from the Board of Estimate Taxation,” he said. “And in the past, the board has requested this and the city has approved it. And so, we would recommend that the Finance Committee support going forward with that request again this year.”

Hamilton said that he believed this funding could be useful in the upcoming year as the school district deals with the impacts of the COVID-19 pandemic.

“I think the rationale is we’re still in a very fluid sort of situation with COVID and with the impact of the pandemic,” Hamilton said. “And so, we think setting these funds aside for educational purposes is a smart move.”

Colin Hosten, Board of Education chairman and head of the Finance Committee, supported carrying over the funding.

“It’s an impressive end of the year closing. And I think we all agree that that’s money that should go back to the kids,” Hosten said.

Hamilton said that his office has a new goal for the 2022-23 budget – get it to the Board of Education in early December and have them approve the preliminary budget before Christmas.

“One of the things that we are intending to do this year is to present the budget to you a month earlier than we have in the past,” he said. “And the purpose of doing that is to try to have the Board actually adopt the budget prior to the Christmas break, so that we don’t sort of get caught up in the middle of Christmas break, trying to get a budget document prepared, and then sort of rush through the Board approval process.”

Hamilton said that the current plan is for the Board to adopt its first budget at its December 21 meeting, but if it needed to carry into January, at least a lot of the work would already be done.

“If for some reason, the Board wasn’t ready to adopt it on the 21st, you could move it forward to the January meeting, but at least the bulk of the work on the budget would be done in the month of December, which we think is definitely preferable,” he said.

Hosten said that the extra month will be helpful for them to have these conversations with members of the Common Council and Board of Estimate and Taxation.

“It may seem counterintuitive to members of the public that we’re talking about next year’s budget cycle when this year’s budget is about a month, but I do really appreciate the effort to get us going,” Hosten said. “Even that extra month, I think, is going to be very, very helpful and helping us have those conversations with our colleagues on the Council at the BET and not feeling as rushed as this, this process can sometimes feel.”

Hosten said that he and Common Council member Greg Burnett, chair of the Council’s Finance and Claims Committee, are working on a joint meeting for October which could serve as a “good opportunity to get a high-level preview into what things are looking like for the 2022-23 budget.” 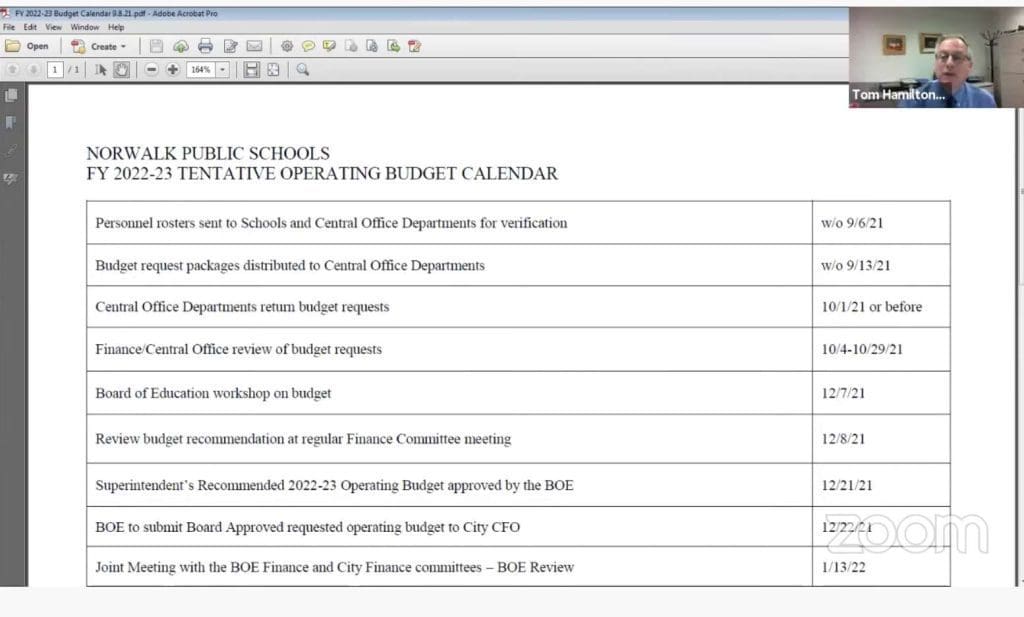 Thomas Hamilton never ceases to amaze me. In my opinion he’s Estrella’s most talented spokesman, although I’m not sure that’s in his job description. Maybe he should be paid extra for running interference for her. What Hamilton fails to point out as we look to the new year is the amount of Federal Dollars pouring into NPS. He seems to be setting taxpayers up for excuses to burn more dollars. I’m not sure who Hamilton reports to, but it’s time Henry Dachowitz becomes his boss.
The New York influence in our system will come back to bite us in a year or two. If the Board of Ed was worried about leaks over the past few years I predict they haven’t seen anything yet. So to whoever is in charge of moderating Social Media for NPS, you should request a raise and additional staff because you’re about to get very very busy.

Are there any plans to improve City school performance ? CT Edu Dept website states less than half of Norwalk’s public school grads meet current CT Edu Dept standards for math and science. And that less than half of our grads ever secure a 4 yr college degree. Ought we not secure better performance give that our Supt is one of the highest paid in CT – $300k+ even though per capita income in Norwalk ranks just 48th in the State.