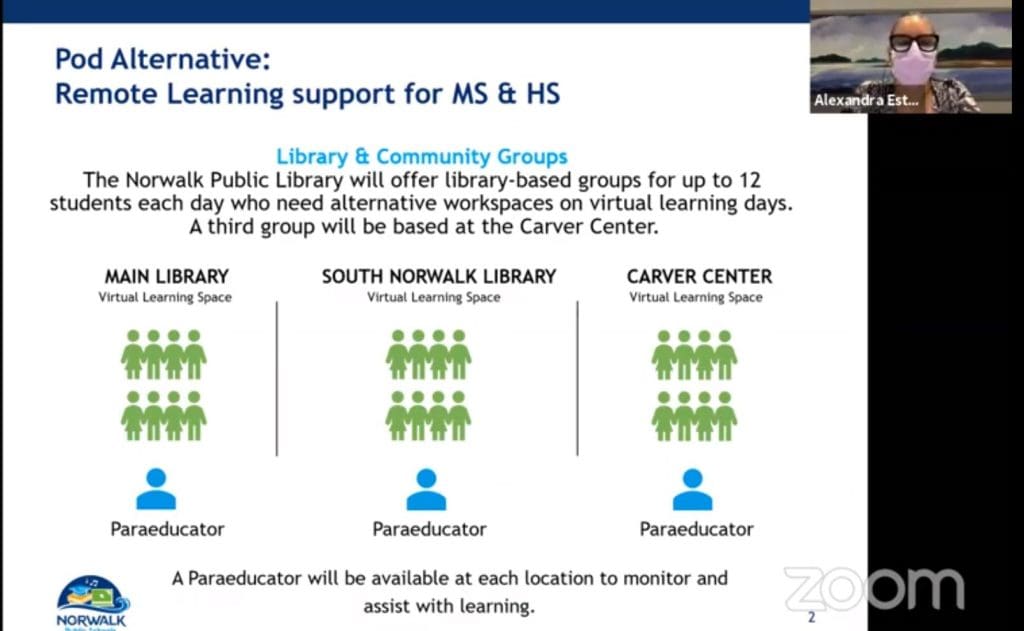 Norwalk Superintendent of Schools Alexandra Estrella explains “path pods,” Tuesday during the Board of Education meeting.

NORWALK, Conn. – The pricetag for reopening Norwalk Public Schools under COVID-19 restrictions has dropped to $15 million, down from the $21 million that was originally estimated.

This means that NPS is $5 million short. NPS Chief Financial Officer Thomas Hamilton expressed optimism that this could be dealt with.

The meeting was operated almost like a dry run for the conditions students and teachers will be experiencing under a combination Zoom-in person learning scenario that’s planned.

“We’re doing something sort of similar to what I imagine teachers will be doing, which is that we’re simultaneously on a zoom call and talking” in person, said Norwalk Board of Education Chairwoman Sarah LeMieux, who was wearing both a mask and a face shield.

Some comments were not audible, and occasionally a Spanish interpreter’s voice broke into the audio feed.

A detailed look at reopening plans followed, with occasional bursts of good news.

The U.S. Department of Agriculture (USDA) has extended the summer feeding program through the end of the year, Costanzo said, calling that “a quite a wonderful thing for the community” because any child between the ages of two and 18 will be able to get a free breakfast and a free lunch.

“We have been extremely busy trying to make sure that we are fully staffed for September eighth,” Padilla said.

Feedback from school principals showed that NPS needed to hire 24 additional paraprofessionals, and this has been done, Padilla said. That includes 15 paras for elementary students, four to support English Language Learner classes for older students and two to staff the help desks for students and parents.

There are also three “community pods,” each designed to assist middle and high school students on their remote learning days in the hybrid environment. One is at the Main library, one at the South Norwalk library and one at the Carver Center, helping a total 72 students, Norwalk Superintendent of Schools Alexandra Estrella said.

The goal is to provide an “additional system of support if they don’t have access to Wi Fi or also because their parents are at work and they need somebody that provides additional guidance. These seats will be filled out, first come, first serve,” she said.

NPS is also increasing the hours of about 70 paraprofessionals, Padilla said.

“The second milestone was bus monitors,” he said. NPS has 58 buses so it needs 58 monitors.

“We are working very, very hard to get that goal completed,” Padilla continued. “Actually, we are up to 37 hires, so we are still, 21 people that we have to process through our application and background check.”

Durham, the bus contractor, also has applicants so “we’re confident we will meet that goal as well,” he said.

Then there are nine certified staff members taking a leave of absence, he said. The requirement for in-school teaching lead to about 45 requests for reasonable accommodations that could not be fulfilled. There are then 13 Family and Medical Leave Act (FMLA) requests from certified staff that must be considered.

“The numbers aren’t huge, but this has created a number of backfills that we have to do,” and the district needs nearly 50 long term substitutes, Padilla said.

“We’re in the process of processing about 32 certified staff,” he said. “Some of those are long term subs that we will be able to deploy to different buildings as those needs arise, and really to try to keep a pool of certified staff in the event we need to use them at moment’s notice for different reasons.”
An outside company is also working to build a pool of possible substitute teachers, he said.

“This is where we’re at as of this moment,” he said. “It changes rather quickly, oftentimes by the hour, because we’re getting a lot of requests from employees just asking some general questions, asking what their options are.”

NPS is required to provide money to private schools, and the ESSER grant has already paid for summer school, he said. The remaining balance of that grant is still available. The last item on the list is for “additional costs related to allowing teachers to come in early to help set up and costs associated with that.”

“Some of these expenses have not yet been incurred, so there is some ability to scale things back if we need to,” Hamilton said. “Many of the items have already been purchased.”

NPS had a larger surplus from 2019-20 than had been expected, and $1.5 million could be available to cover the shortage, should the City approve, he said.

Additionally, if you assume that only 60 percent of the new paraprofessionals working more than 30 hours take benefits, that would free up $570,955, he said. Reducing academic supplies by 40 percent reduces the total by $288,000.

So that leaves a shade over $3 million to account for. There’s the possibility of additional State or federal money, he said.

“That leaves me with, you know, a certain sense that I’m feeling we’ll make our way through this,” Hamilton concluded.

The large Special Education expense has to do with the need for specialized PPE and spreading children out into separate classrooms while maintaining the 50-50 ratio of SpEd to typical students, as required by federal law, Chief of Specialized Learning and Student Services Yvette Goorevitch explained.

Estrella said State architects had visited Jefferson Elementary and Brien McMahon High School this week “to look at our ventilation system and provide us with feedback to ensure that we were adhering to state and CDC (Center for Disease Control) practices.”

“They left pleased with the work that the team has done,” she reported. “As well as they left with the sense of feeling that we have gone above and beyond. They were very happy to see the HEPA filters in our buildings and also made comments about how our district has exceeded the state expectation in terms of how we’re structured.”

She said, “In terms of funding, just know that we are constantly advocating to the state. Although they gave us $8.3 million, we’re trying to advocate for additional funding because of the additional expenses that we have specially because we have our elementary schools coming five days a week, while the other grades are hybrid, but we also have multilingual learners and Sped coming in full time.”

Nothing spends as easily as public debt.

So gratifying to see the Public Library system and Carver Center support students’ remote learning as the Norwalk schools re-open, but it’s no surprise given these institutions creative and consistent support for Norwalk’s kids.

I do have an issue with reporter’s term ‘feeding’ program – it’s a meals program.

I’m glad the district is confident but those of us in the trenches are not. Teachers are being asked to move classrooms. Class lists aren’t finalized. We don’t know how lunches are working. We really need more time. I’m sorry; but, these PD days aren’t the right preparation we need. There hasn’t been time to implement and test out. I’m looking forward to seeing my students but there is still a ton we don’t know or is changing.

But Overwhelmed… I found the “How to be an Antiracist” PD quite enlightening! Nothing quite like returning to work in person with the promise to parents and staff that we would receive quality safety training, only to essentially be told that we’re all racists, and this PD will help you not be one. All of these PDs should be available on the NPS district website, so parents can see the nonsense that is thrown at us during a plague. There’s a time and place for everything, and this week was NOT that time.

By the way, we only had ONE PD on safety. The nurses were pleasant, but we were told NOT to wear N95 masks.. because they are only for the medical field, which included them, of course. At this point, we’re in confined spaces with lots of students.. please don’t tell me not to protect myself. Thanks!

good. some teachers see the ‘anti racist’ training is a waste of time during a plague!