Parents line up on Strawberry Hill Avenue next to Norwalk High School in this photo included in a Norwalk Public Schools PowerPoint presentation. (Contributed)

NORWALK, Conn. — Norwalk Public Schools’ leadership is proposing that NPS elementary students go to school earlier and middle school kids arrive later, as soon as possible, and will be discussing the plan in depth at Tuesday’s Board of Education meeting.

The sudden shift, just weeks after the start of the school year, is being presented as an attempt to lighten the traffic nightmares that came with school reopening in a post-remote learning environment. Many blame the 2019-approved plan to delay high school start times for the mess.

It’s not just the delayed start time, but rather a “perfect storm” of road construction in key areas combined with many parents taking their children to school themselves instead of putting them on a bus due to fears of the coronavirus and the delta variant, Norwalk Superintendent of Schools Alexandra Estrella said Monday. When the delayed start times debuted last year, NPS was avoiding full classrooms to protect students from COVID-19, with only half the students in school at a time.

Now attempting full capacity, NPS has found itself in “these terrible traffic jams,” damaging the parents’ quality of life, Assistant Superintendent of Business and Operations Sandra Faioes said. “We heard from quite a few parents about the concern that students were waiting at bus stops for a really long time, because buses weren’t getting to the bus stops at the time that we were advertising the parents should be expecting students to get picked up.”

A full 85% of buses were late during the first week and it only improved to 75% being late in the second week, she said. An NPS document released Monday night said some kids have stood at bus stops for more than an hour and parents have waited two hours for them to return in the afternoon. On average, the buses are 15 minutes late to school, cutting into learning time.

Two options will be presented Tuesday, each featuring elementary school students going to school as early as 7:45 a.m., more than an hour earlier for some of Norwalk’s youngest kids.

Board of Education members had teenagers’ health on their minds in 2019 when they approved the plan to push back high school start times on a 6-2-0 vote. While the details weren’t worked out, then-BoE member Mike Lyons said every major improvement Norwalk has made was done without having “every answer” before the project was approved.

Then-BoE member Bryan Meek voted against it, citing fears of a local “traffic tsunami” due to numerous Connecticut Department of Transportation projects expected to be underway.

Estrella came onboard in 2020; the start time plan was formulated under then-Norwalk Superintendent of Schools Steven Adamowski. There was talk of a traffic study being done before the plan was implemented but that didn’t happen, Estrella said Monday.

The problem is the “tiers” of buses are too close to one another because the various levels of schools are starting too close to each other, Estrella said. The plan is to space them out.

Yes, some of the problematic road construction is due to ConnDOT projects. Eversource is also in the mix, as are the City’s planned sidewalk improvement work.

“We’ve been in communication with our Mayor and he’s been very supportive of about making adjustments where they have control, but in some cases, we have not been able to make adjustments,” Estrella said. “…It’s simple, the construction is state governed. But despite these factors, if we didn’t have the scenarios, we will still have delays because the tiers are so close together. It doesn’t give us enough time for pickup and final drop off.”

A plan to pave the BMHS parking lot, with possible changes to the traffic flow, is said to have been delayed.

A survey of parents showed that more than 60% “were amenable to us making changes in the start times in order to accommodate and fix the traffic delays that we were facing,” NPS Chief of Staff and Communications Brenda Wilcox Williams said.

Administrators have thoroughly reviewed the Healthy Start Times Report developed through 18 months of study under Adamowski and are “honoring the science” showing teenagers need more sleep and that “younger students actually have more aptitude for performing well in the morning,” Faioes said. “And given those considerations, and trying to say cost neutral, we’ve put together two options that we are presenting.”

The existing 8:30 a.m. high school start time “really makes a lot of sense,” not just because the teens can sleep but because of high school athletic schedules involving other school districts, Faioes said. Moving back the middle school times from 8:15 a.m. to 9:15 a.m. provides the sleep benefit to those kids.

“We’re also trying to alleviate the traffic on Highland Avenue and Strawberry Hill by having the schools there start at different times. So really addressing several issues at the same time,” she explained.

NPS posted Faioes’ Power Point presentation explaining the plan and its options Monday night, ahead of the Board of Education meeting. There was a mistake showing the school day at some elementary schools being shortened; a revised agenda was released three hours later, correcting the error. 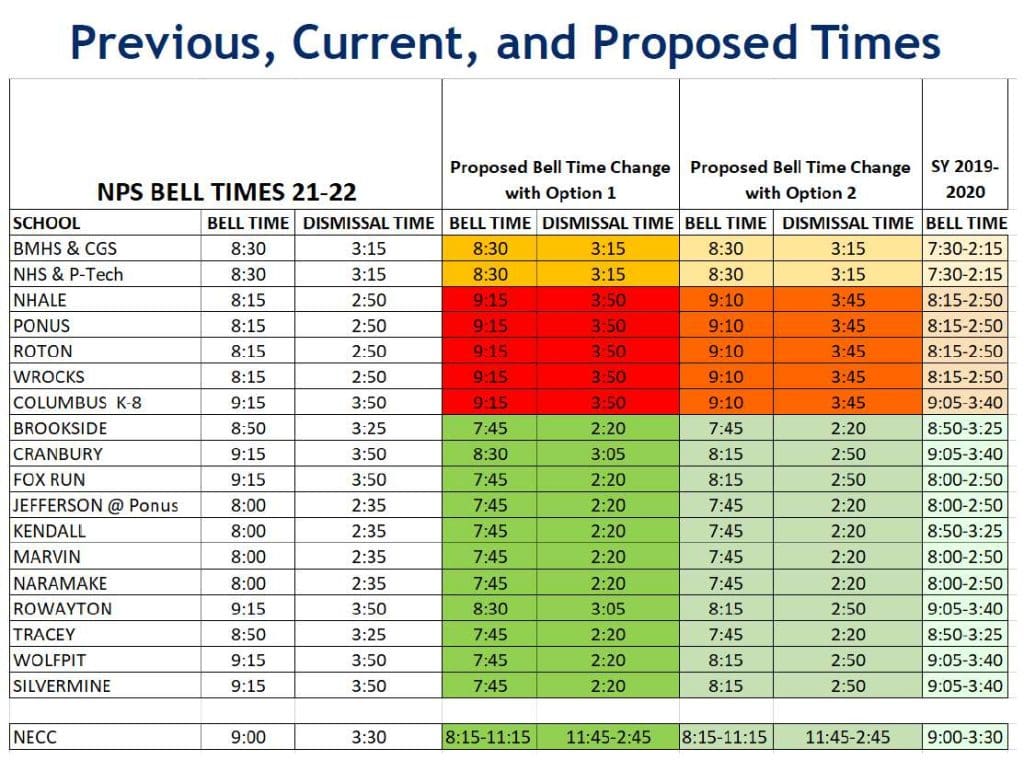 A chart included in a Norwalk Public Schools PowerPoint presentation, set to be discussed at Tuesday’s Board of Education meeting.

Parents were swift to complain.

“These are huge changes for parents and staff!” one person said on the Facebook page, Norwalk Parents for Education.

Another pointed out that Columbus Magnet School would keep its 9:15 a.m. start time, presumably because it’s K-8.

“Why is there no option of moving the High School start back instead of the upheaval of all of the elementary schools, when school is already in session and parents have set up their work and childcare schedules,” a parent wrote. “High school students do {not} require childcare. Wasn’t dealing with COVID with unvaccinated children complicated enough. Why do we have to cause such disruption to the Norwalk community?”

But another wrote, “I always said they do need to move elementary earlier! My children are up at crack of dawn and sleep are 7:30…. Coming off the bus at 5 is too late for these young children!”

And one laid out a plan of action: “Email your concerns to [email protected] before 4pm tomorrow!”

If the plan is approved, implementation could come in “the next two or so weeks,” Estrella told NancyOnNorwalk. But first it will all be discussed “in-depth.” There are two BoE meetings scheduled Tuesday at Ponus STEAM Academy: a workshop at 6:30 p.m. concerning a Norwalk ACTS survey and then at 7:45 p.m., the presentation concerning “possible action on school bell times.”

Public comments can be made by Zoom.

Norwalk isn’t the only community to be hit hard by school reopening traffic: Texas parents in Brownsville and Sherman also don’t want their kids on the bus, news reports say, and in North Carolina problems are attributed to a bus driver shortage prompted by coronavirus fears.

That’s not a problem in Norwalk, as Durham has sufficient bus drivers, Wilcox Williams said Tuesday.

Estrella had a request for parents.

“We’re urging our parents to really use the bus system to help mitigate some of the added congestion,” she said. “I understand some of the concerns parents have with COVID and everything, but the buses are sanitized. We have CDC metrics being followed. So wherever possible utilizing the buses is the best option because it will help address some of the traffic.”

Updated at 1 p.m. with more information.

Bruce Kimmel and gang authorized a $90,000 traffic study before they instituted the new start times so kids can stay up later and watch tv all night. Then he resigned. Maybe with his free time he can direct traffic now at the high school. $90,000 could buy a lot of computers for school.

These are the same folks plowing ahead on a new NHS that we don’t need. Can’t wait for those unforeseen issues. Hold on to your wallets.

And for the record, I said it was going to be a traffic tsunami and that the construction was going to make it worse, not that the construction would be the issue itself. This problem can only be fixed with massive engineering or changing back to schedules. And this wasn’t some stroke of genius to predict this. There are 250,000 people driving through Norwalk every day, most of them on I95 until Waze tells them to ditch it for side roads.

But this horse is out of the barn. Stop the new NHS now, before I get to have another I told you so.

I have a granddaughter in Kendall and her sister in ponus. What is a working mom supposed to do. Do any of the people on the board of Ed have kid’s in school. Take the blinders off. You’ll have an uprise of parents on your hands

The “revenue neutral” changes may not cost NPS any more. That’s because the real costs will be paid by families when employers don’t change their business hours to suit the whims & blunders of the Rubber Stamp Gang.
Of course, the real revenue neutral solution would have been to simply contract for more bus service. How is that “revenue neutral”? Well, pay for the busses needed to correct the BOE’s blunder by right-sizing the ever-soaring administrative salaries doled out to a new generation of NPS flacks who failed to anticipate that school buses can’t fly above street traffic.

Absolute stupidity. The horse is out of the barn and every elementary parent has built their work and childcare schedules around these times.

Let’s not change the one group that doesn’t need parents to get them to school.

But hey she said she’ll give us a whole two weeks to figure it out.

This is what I’d call a Sad/Humorous Sandwich. You know the sandwich named after actions taken by psuedo intellectual elites who never fail to prove their lack of common sense.
This my friends is only the beginning of what will be a wild school year..