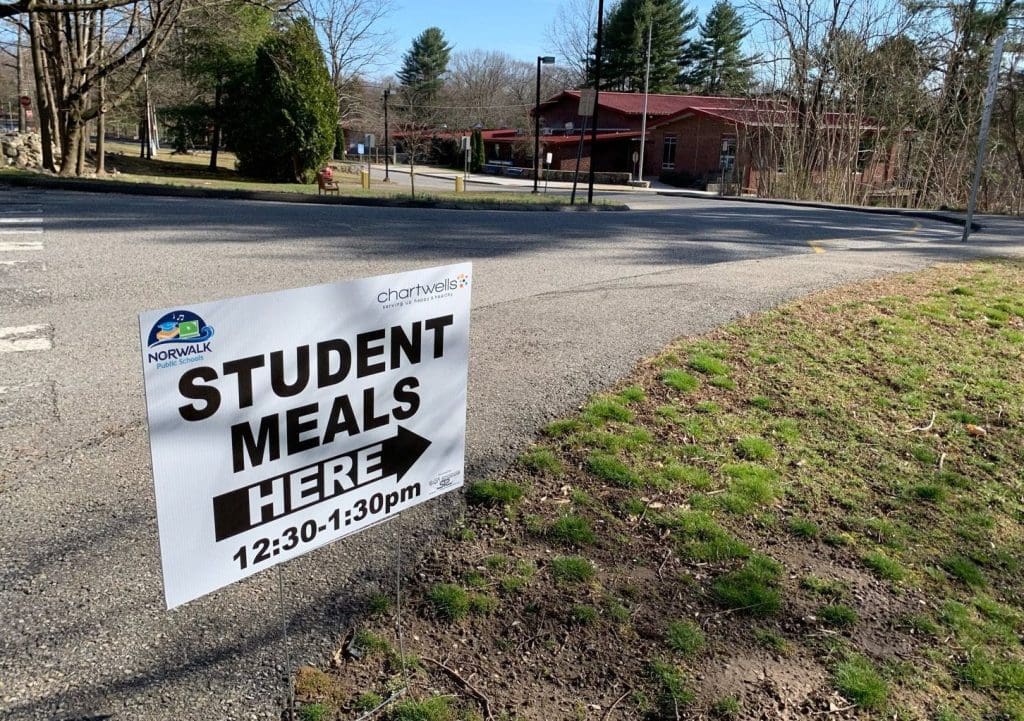 A sign outside Silvermine Elementary School seeks to get the attention of families whose children walk to school. (Claire Schoen)

NORWALK, Conn. — It’s possible that Norwalk Public Schools will serve 30,000 meals to children a week while they’re out of school due to the coronavirus crisis, NPS Chief of School Operations Frank Costanzo said.

“We believe this has much to do with our decision to deliver the meals to children at their bus stops, which has been quite an undertaking, compared to the distribution center model where children and families must walk or drive to. Many of our families live without a vehicle and live a mile or more from the nearest school,” Costanzo wrote in a Friday email.

NPS is using school buses in “what we think is a very innovative way of delivering school breakfasts and school lunches to those children that need them,” Norwalk Superintendent of Schools Steven Adamowski said at last week’s Board of Education meeting. “This has gotten a lot of attention from other districts and other cities.”

More than 5,000 meals were served during the operation’s first two days, evenly split between breakfast and lunch, Costanzo said. There was a 34 percent increase in meal counts Tuesday, a jump from 2,100 on Monday to 2,714. By comparison, Stamford and Waterbury, both larger districts than Norwalk, had served 2,000 meals Tuesday, and New Haven served 1,300 on Monday.

“In fact, today we had to resupply to buses mid-route because so many kids came out to their bus stops,” Costanzo said. 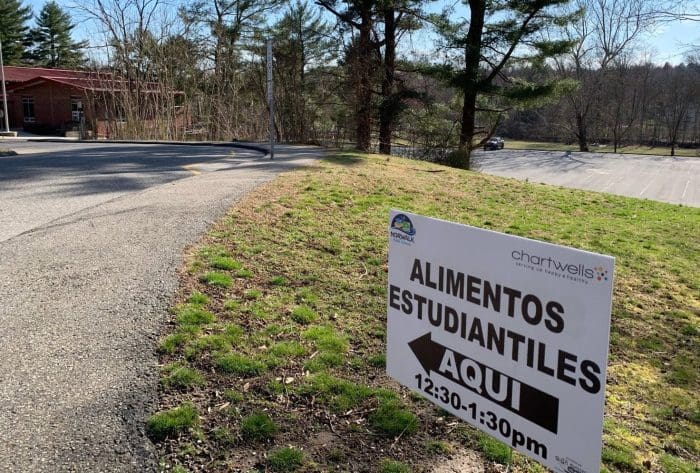 A sign outside Silvermine Elementary School seeks to get the attention of families whose children walk to school. (Claire Schoen)

The walker population was “quite low” compared to what was expected, and NPS was planning to post lawn signs to alert families to the opportunity, Costanzo said. A bilingual outreach was also planned.

Again, they’re evenly split between breakfast and lunch. The goal is 5,000 meals a day, according to Costanzo.

“We have added additional temporary refrigeration capacity to enable us to provide weekend meals starting next weekend thanks to our Facilities Dept.,” Costanzo wrote, and with the “17,066 meals this first week, and with the addition of weekend meals next week, we have the potential to serve 30,000+ meals per week.”

The American Dairy Council is supplying NPS with 240 insulated delivery bags, at no cost, so that milk can be “safely delivered to the students,” Costanzo said. The USDA granted NPS $50,000 on Friday, to purchase fruits and vegetables in support of the food delivery program.

“It has been gratifying to feed as many children as we have during the first week of closure. Many of our children rely on their school breakfast and lunch for meeting their daily nutritional needs,” Costanzo wrote Friday.

NPS was working through its remaining food stock and was expecting food quality to improve, Costanzo said Tuesday, predicting “meals that closely resemble what students would be eating if school were open.”

A new menu that includes sandwiches and is heavy on fresh fruits and vegetables has been delivered to parents, he said Friday.

Any Norwalk resident 18 years old or younger is eligible for the food, and it’s important that they be there to receive it from the school bus workers because NPS is being reimbursed for the meals, Costanzo said Tuesday.

“At times like this, many districts would furlough their bus drivers, and just continue to pay the bus company,” Adamowski said. “Now in our case, we pay the bus company three months in advance to receive a discount. And so we want to have our drivers employed and maintained in their employment … that was one of the reasons that led to the use of the buses for delivery of food.”

“It’s gone extremely well,” Costanzo said. “When I asked my operations team to come up with a food plan that would feed the most children, they certainly came up with quite an idea. And I’m grateful for their leadership and contribution.”

I am so proud of our community for getting this program up and running right away, providing a lifeline to our most vulnerable children. Keep it coming and we’ll get through these challenging days!

I am so proud of Norwalk Public Schools for doing this. Our students cannot learn if they are hungry.

Thank you to all the selfless food service workers, bus drivers and aides that are helping to distribute these meals. They are the boots on the ground making it happen. Team work!

How can the community help?