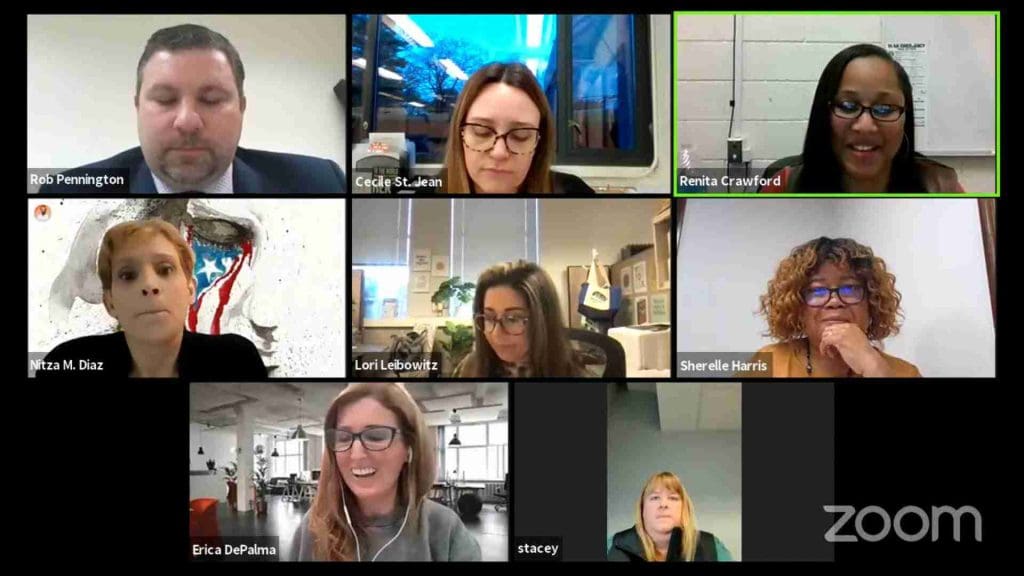 Norwalk Public Schools Chief of Staff and Communications Brenda Wilcox Williams initially said that a Freedom of Information request should be submitted to learn Crawford’s employment status. NancyOnNorwalk put in a request to Labor Relations Attorney Barbara Namani, asking for Crawford’s current status and her history with NPS. A week passed without a reply. Informed that NancyOnNorwalk was going forward with a story, Wilcox Williams confirmed that Crawford is not at P-Tech.

“Ms. Crawford is assigned to BMHS as a history teacher. We have no further comments on this personnel matter,” she said.

Crawford was reportedly born and raised in Norwalk. A Carver Foundation of Norwalk webpage posted in 2020 describes Crawford as “a Carver alumna since Kindergarten.” She’d been a P-Tech (Pathways in Technology Early College High School) CISD since at least November 2020, when NancyOnNorwalk obtained communications from P-Tech School Governance Council members objecting to elements of the then-developing plans for a new Norwalk High School. She represented P-Tech at an October BoE Curriculum Committee meeting, in which she called herself an assistant instructional leader at P-Tech.

Crawford was reassigned while P-Tech Principal Karen Amaker was out on leave, sources said. Crawford had been performing as acting principal in Amaker’s absence, according to one source. Another said NPS had assigned Marie Allen to serve as acting principal.

Amaker said she could not comment on personnel matters.

Penn-Williams took to Facebook on March 16 to leave a cryptic post about the allegations in a closed group. The rules of that group do not allow the news media to quote posters without their permission.

In an email to NancyOnNorwalk, Penn-Williams alleged that NPS is “doing some shady s–t. They have declared war with me. I am not going to stand for my God daughter to be railroad.”

She declined to say who her goddaughter is.

Separately, Penn-Williams is suing Norwalk Public Schools and the City, alleging that she was discriminated against when her employment as a substitute teacher was terminated in October 2018. She also alleges that she was retaliated against for exercising her right to free speech.

Attorney Ryan Daugherty represents Penn-Williams in her lawsuit. He confirmed Tuesday that Crawford is her goddaughter.

Penn-Williams said Crawford had been “fired after June.” This aligns with what other sources say: Crawford was told that her time in the school district would be over at the end of the school year.

“They have made up lies on her,” Penn-Williams said.

Crawford has not commented. An email sent to her Wednesday at an email address provided by Penn-Williams went unanswered.

Norwalk Association of School Administrators (NASA) President Lynne Moore did not reply to an email asking about the situation.

Norwalk Federation of Teachers President Mary Yordon said, “I have spoken in the past about and continue to believe that high turnover of staff has an impact, because it takes time to develop solid working relationships. These relationships are essential to high functioning schools. I can’t comment on this specific situation.”

NPS is facing a lawsuit due to a personnel issue that occurred under Norwalk Superintendent of Schools Alexandra Estrella, who took her post in July 2020. Donalda Chumney alleges breach of contract and bad faith in her brief tenure here as NPS Chief Academic Officer. The complaint alleges that Chumney, labeled “damaged goods,” was forced to become a school principal in Virginia after departing NPS.

Why is so difficult to secure suitable leadership for our public schools so they focus on educating our kids and we don’t have to read articles about “challenges in our school administration” ? When we came here almost 4 decades ago our schools have a fine reputation and didn’t oft make “news”. Was that because we oft had an experienced attorney serving on the BOE ?

We still bear the scars of several members accusing the entire BOE with “discrimination”. Lets encourage our City’s leaders to focus more attention on BOE candidates so our BOE has the requisite skills to get the job done without making the “news”.

From what I’ve been told this story has legs. In my opinion, if Mayor Rilling and the Board of Ed have any sense at all they’ll cut there losses immediately. The cost/benefit ratio doesn’t warrant this path Norwalk is on. In more ways than one.

$300,000 a year for a superintendent that is the equivalent of the captain on the titanic! What a disaster these people are.

Retaliation is alive and well. The district remains a hotbed for discrimination and sexual harassment. Those that object are punished, often to the point of excess, by a reckless administration and clueless BoE.

Just think of all the very preventable legal fees had anyone with authority said to themselves and others, “Wait a minute, this is a pervasive pattern. Maybe we are doing something wrong here.”

The truth will eventually prevail, and our taxpayers are the ones to pay for it again and again.

If this were a private sector job, she would have been canned. Good old at will employment

Without knowing details of the allegations on either side of this conflict, I can’t even guess if this is a story about someone who is being railroaded, or about someone who has been removed for just cause. However, I have to ask why the superintendent would assign to McMahon someone she regards as a problem. If there are serious charges, there are appropriate ways to address them, and transferring a person isn’t one of them. I expect that the McMahon community will give Ms. Crawford the benefit of the doubt, but it would be so much better if she were going there without a cloud of doubt surrounding her.

I can’t speak about Ms. Crawford, but I do know that there have been too many highly competent people have been forced out of NPS during this superintendent’s tenure. Officially, the reasons have been listed as resignations or retirements or the pursuit of new opportunities, but these reasons don’t reflect what really has happened. I know this because I know a good number of these people.

As Mrs. Yordon said, “. . .high turnover of staff has an impact, because it takes time to develop solid working relationships. These relationships are essential to high functioning schools.” However, Dr. Estrella seems not to care about these relationships. Further, she has been known to overlook the unwarranted relationship-destroying behaviors and actions of some of the people she has hired, while aggressively removing people who had long been a credit to the students and staff of this district.

These are very troubling times, and I think the weak board of education will face up to the problems only after far more damage has been done. In light of all the community support and excellent leadership that the district has known for years, that will be even more tragic.

As Mrs. Yordon said, “. . .high turnover of staff has an impact, because it takes time to develop solid working relationships. These relationships are essential to high functioning schools.
What is hysterical about this comment is Estrella just named a 78 year old Lynne Moore as next principal at Tracy…Can you imagine a 78 year old who is suing the district developing those solid working relationships….Think about that for a second….When you stop shaking your head think about that as you might evaluate current state of BOE…MIND BOGGLING