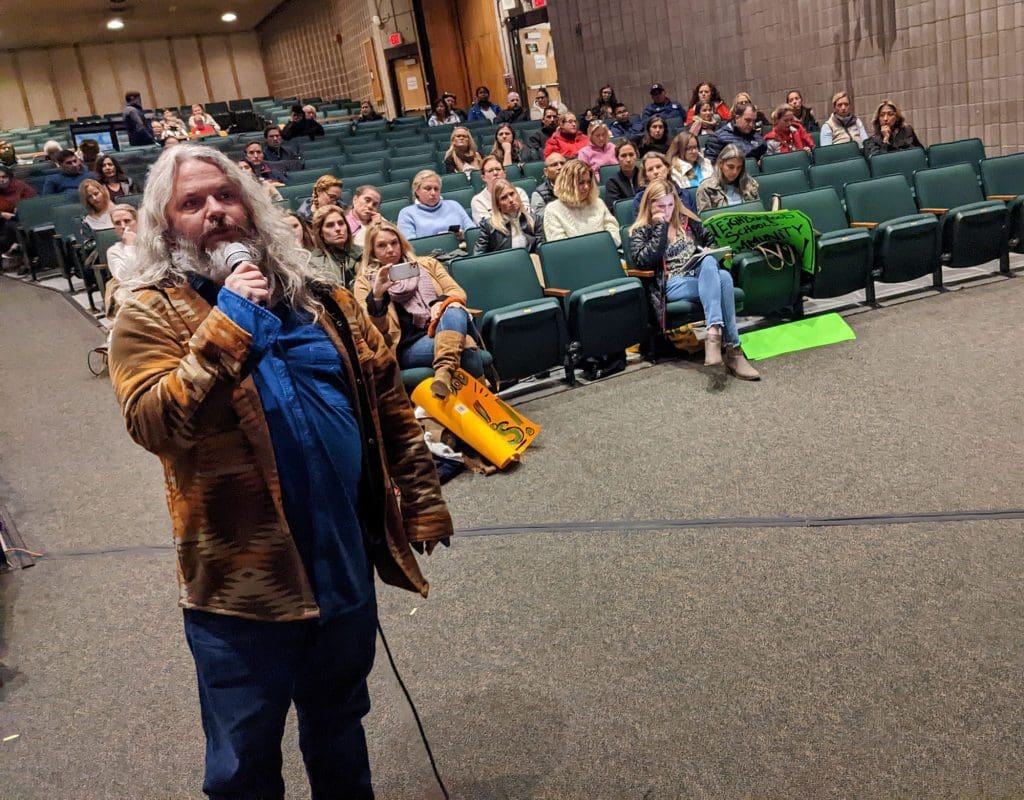 NORWALK, Conn. — School district leaders fielded questions about Middle School Choice on Monday, quelling some of the controversy by emphasizing that next year’s incoming sixth graders will be about to attend their neighborhood school if that’s what they want.

The outcry inspired recently by a district announcement was blamed on “miscommunication.”

“Much of the confusion and frustration that our families have been feeling this past week, stems from a miscommunication from the district in which a staff member incorrectly framed the Choice Program as mandatory for every fifth-grade student. That was not the Board’s original intention,” Board of Education Chairman Colin Hosten said.

About 100 people attended in person at Norwalk High School, while more parents looked in from afar: the YouTube broadcast had 726 views at 3 a.m.

On Sept. 23, fifth grade students’ families received an email announcing Middle School Choice. Students would rank their choices from the 10 available programs, and a lottery system would lead to “equitable” results. There would be “no guarantee” that the student would go to the middle school closest to their family home.

“When I got that email, I almost had a heart attack, quite frankly,” Audrey McCarthy said at Monday’s town hall. “I went into Walmart, and almost every parent at Walmart was talking about this.”

Estrella said, “We took the feedback very seriously. As a result, we made modifications to the choice process.” The lottery components have been “significantly modified based on the feedback.”

“Research that shows that exposing students to pathways, or areas of interest, increases engagement, increases rigor around academic coursework,” Estrella said. “We’re not saying that we will not continue to provide the core courses because those are instrumental in the learning experiences of our students.”

Ralph Valenzisi, Assistant Superintendent of Digital Learning and Innovation, promised that all students will be provided transportation to pursue their choices.

A 2021 transportation study looked at middle school choice options, Assistant Superintendent of Business and Operations Sandra Faioes said. NPS had buses dedicated to taking Jefferson students to Ponus and now that Jefferson is open again, those buses are available. One more bus might be needed if more students opt in than expected, but the study demonstrates what the cost impact might be.

NPS will contract with a separate company for the buses needed for the Norwalk High School project and its related athletic activities, as students use facilities not on their campus while construction is underway, Faioes said, in response to a question later.

The town hall’s format confused some, as in-person attendees were given two minutes to offer comments, but questions were submitted in writing. If a speaker asked a question, it went unanswered.

Randy Funke asked how further miscommunications would be avoided, and that was not addressed.

He was one of several speakers who alleged that the core curriculum is failing students. “It’s great to be able to study molecular biology. But it doesn’t really help if you can’t add 10 plus 10,” he said, to a smattering of applause.

When the question was asked by paper, Assistant Superintendent of Schools Rob Pennington addressed it.

“These opportunities and pathways are not in lieu of our core instructional programs that we have, and that we are working with. We have also talked a lot about interventionist and coaches at school supporting students,” he said. 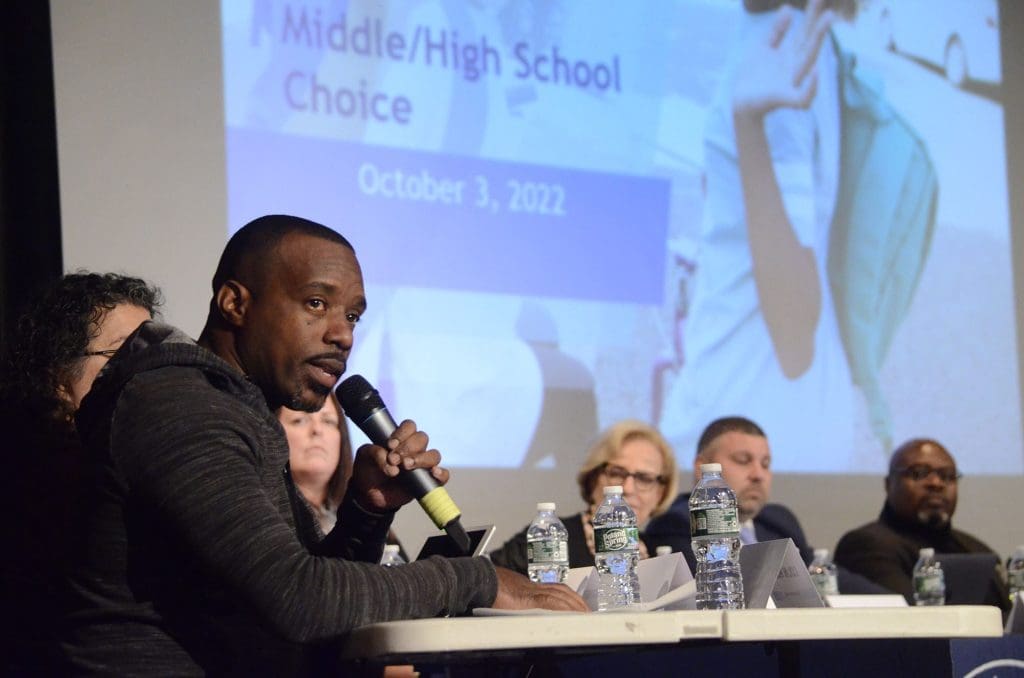 Priscilla Feral was jeered when she expressed appreciation for Hosten, saying it “smacks of discrimination” that “he is attacked” as having an agenda when “he’s an educator and has advanced degrees I can’t even fathom.”

A petition calling for Hosten’s removal garnered 884 signatures. There is no legal mechanism to remove a Board of Education member.

Nalini Jones said her child had gone to Nathan Hale because math was her strength but by the time she got to eighth grade, Nathan Hale’s priority had shifted to the arts. Her other child has “painstakingly” developed peers in International Baccalaureate but she might not be able to continue in IB in high school.

“All of these constants keep changing so rapidly, that actually they don’t seem to be connected to the trajectory of an actual student,” she said.

“It’d be super helpful if you all could explain how to handle the bus situation where we can’t even solve buses right now. They are extremely late and some don’t show up,” one parent asked by paper.

Some laughed when Faioes said data shows 97% of the buses get to the schools on time. She invited parents to let her know if they experience something different.

“How are you going to staff this program when you can’t staff so many classes in high school?” a parent asked in writing.

“Are we having the same challenges many districts across the nation are having in terms of staffing across the board? Absolutely,” Estrella replied. “But our HR team has been working very diligently to ensure that our vacancies are filled and relative to districts similar to ours, we are doing quite well in filling those vacancies despite the national trends of shortages across the profession.”

NPS plans an information session Oct. 11 at the Family Center on East Wall Street and an Oct. 13 Choice Fair.

Proud to be the originator of the last question on staffing. While it continues to be an issue across the country, post Covid- it’s always been an issue for NPS – especially in the maths & sciences. That somehow, NPS can miraculously produce staff with new ‘pathway skills’ when it can’t cover the basics is laughable. What happens when it can’t and it falls to what always happens – dumping further responsibilities on existing teachers? Middle school has had more than its share.

Over the last few decades, high school Pathway-choices have been terrific. Both my sons benefitted from CGS and PLTW that I didn’t have at the same age, in another state. However, it’s after a solid K-8 reading, writing and arithmetic foundation.

If you want real choice -CT is an incredibly poor example – given our 169 home rule towns and exclusionary zoning. CT tops the US for its achievement gap. I often refer to this statistic, but when my kids started NPS in 2005 – we were 23% reduced lunch – now we’re close to 65%. Diversity is not NPSs problem – a hypocritical zoning & funding system, courtesy of our State Assembly drives the achievement gap. Pathways is not going to close it. While it may sound good on paper, as the latest greatest theory coming out of public education for solving the achievement gap in cities, how NPS executes with ‘fidelity,’ another popular education term, remains to be seen. And, it ignores our failing academics. Pathways appears not to be a ‘choice’ but another disruptive program crammed down the throats of students and parents. That is, until it’s pulled 3-5 years when test scores are still in the gutter and the next superintendent and central office staff roll into town.

Just another NPS Nightmare heading our way. Our scores are FALLING!!! Let me repeat our scores are FALLING!!!! The kids can’t even pass at grader level!!! So what are we doing about it!??! Oh we are going to disrupt their lives even more with a plan that hasn’t been thought all the way through. The parents have been totally left in the dark and the teachers who are basically teaching subjects they literally just learned to the students will only get worse. This is the worst I’ve seen NPS ran in years! If we think the old Norwalk Way was bad buckle up! Where’s the TRANSPARENCY?!?! All those BOE Members and the Superintendent promised that when they were elected and hired. And WHERE is Colin’s PUBLIC Apology!?!?!? He had the Mic and had a great chance to make a mends with the community and admit that he was wrong and remind his mom he really wasn’t that famous! If I and many in attendance were grading last nights presentation it would have gotten a big fat F! And BTW, I would love to hear Marchetti’s and Cross’s response to the busing of Athletes. Where is that EXTRA Funding coming from?!?!? Where are the drivers coming from since we currently have a shortage as it is. We can’t even have a scoreboard on for any other level besides Varsity because we don’t have the money to pay someone. What the heck are we doing here?! AND let’s not forget this is all going to be shoved down to the Elementary Schools next year! But never mind the kids can’t add 10+10 but they will know or think they will know what bathroom they could use.

NPS guts its Communications Department , Brenda Wilcox Williams got replaced by some Estrella friends from NYC … and now NPS is having “miscommunications” with the community? What a surprise! Who could have foreseen???

Our board of ed is a complete joke! Someone should have asked Estrella where we should get all the money to pay all the lawsuits against her. Now we will have to pay another million dollar suit because she didnt like that someone had a physical disability and needed to use the bathroom during her zoom call. Highest paid superindentent and lowest on the class chart in my book. She cost way more than she is worth. I think this will now be at least the 3rd suit we will pay on her behalf. Someone should have stood up and asked for a pee pee break at the meeting last night.