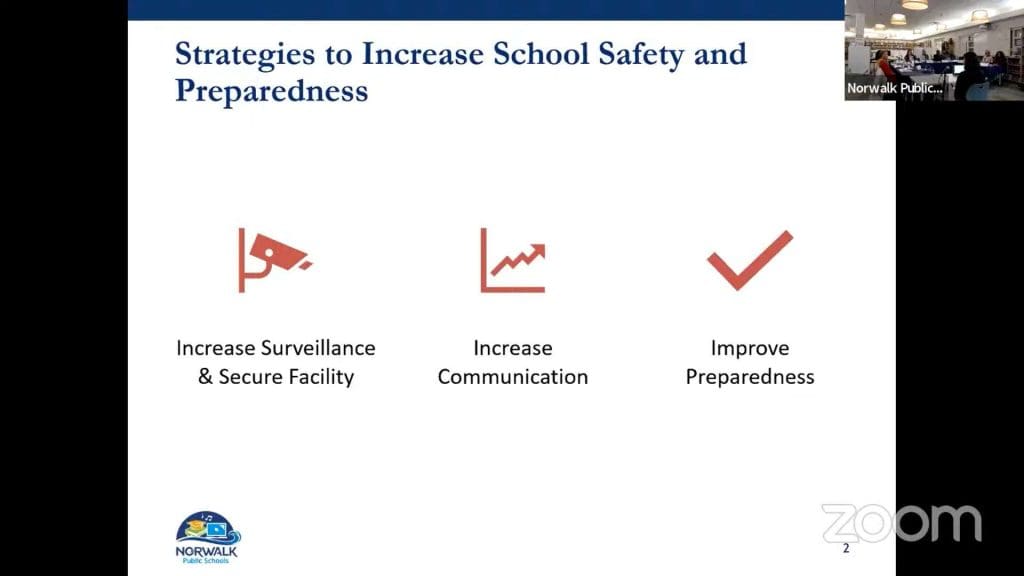 Ryan Harold, NPS Safety & Security Supervisor, presents information to the Board of Education, Tuesday in West Rocks Middle School, as shown via Zoom.

NORWALK, Conn. — Security upgrades and collaborative efforts are making a difference at Norwalk Public Schools, according to Ryan Harold.

“We’ve, as a district, made some tremendous gains in securing and really solidifying how safe our schools are. In terms of safety and security, we have almost three dozen protocols and procedures and systems, which I can assure you is more than any other district in the country,” Harold said at Tuesday’s Board of Education meeting.

Harold, NPS Safety & Security Supervisor, has held the role less than a year. One “gain” parents can easily grasp is increased police presence at the schools, but Ryan’s list of improvements includes additional cameras, fencing repairs and more coordinated communication with the Norwalk Police Department.

Those are funded with the $600,000 in capital budget funds authorized this spring and while NPS was grateful, it had a list of wants that was “way more,” Assistant Superintendent of Business and Operations Sandra Faioes said. The district is seeking $1.3 million to continue improvements.

Of that, a $440,000 request to fund Mutual Link, a development that connects emergency responders’ communications with the school system, caught the Board of Education’s ear. Rather than waiting for the next capital budget cycle, the Board should request a special appropriation, Board of Education Chairman Colin Hosten said.

“I think it rises to that level of urgency, so we don’t want to wait,” he said.

The comments come in the wake of the mass shooting at an elementary school in Uvalde, Texas.

“Clearly, they did not have all their connections together,” BoE member member Mary Ellen Flaherty-Ludwig observed.

“We’re learning from the you know, the mistakes or unfortunate circumstances of other communities to stay ahead of it to make sure it doesn’t happen here,” Harold said. “… But where we are now, we’re already far, far ahead of many, many school districts within this country, between, again, our primary, secondary and tertiary measures around school safety… I would guarantee that we have some of the most intricate protocols and procedures within the country.”

NPS is spending $180,000 of this year’s funds to increase the number of cameras at the high and middle schools, and improve door alarms, Faioes said.

Software is increasing the cameras’ efficacy, moving them from being a reactive tool “into more active surveillance, to prevent things from happening,” he said.

They’re meant “not just to keep people out, but also to keep small people in and making sure that we are addressing what is happening when a door is opening. And we are not following that single point of entry that we stress in our safety guides,” Faioes said.

When a Wi-Fi alarm is tripped, a notification will go to security “then also through email and texts to designated members within that school community,” Harold said. “…After we do our elementary schools will move to our middle schools, and then ultimately our high schools.”

(NAOP) Norwalk Alternative Opportunity Program has a full time guard as does the SoNo incubator school at the Carver Center suspension site, he said.

Also, “the after-school programs (and) before-school programs do have emergency plans, they do do drills. So they do have outside of the security guard on staff, their staff does train emergency preparedness and so forth and how to deal with these situations,” Harold said.

Last year, there were three SROs (School Resource Officers) in the district, now there are five, he said.

“The feedback from our schools around the SROs has been incredible,” Harold said. “So we now have a full-time SRO at each one of the high schools, and then the other three SROs are split up between the remainder schools…. just those two extra bodies have really afforded them to focus on the preventative work, the primary prevention stuff, and the feedback from the schools has been nothing but positive and glowing.”

The district also has five full-time patrol officers. Every NPD officer has a master key fob to the school system so if there’s an emergency, they’ll be able to get into the buildings, according to Harold.

“It’s quite clear that the schools and our students are the priority of the police department. And I can honestly say that’s not always the case in other cities,” Harold said. 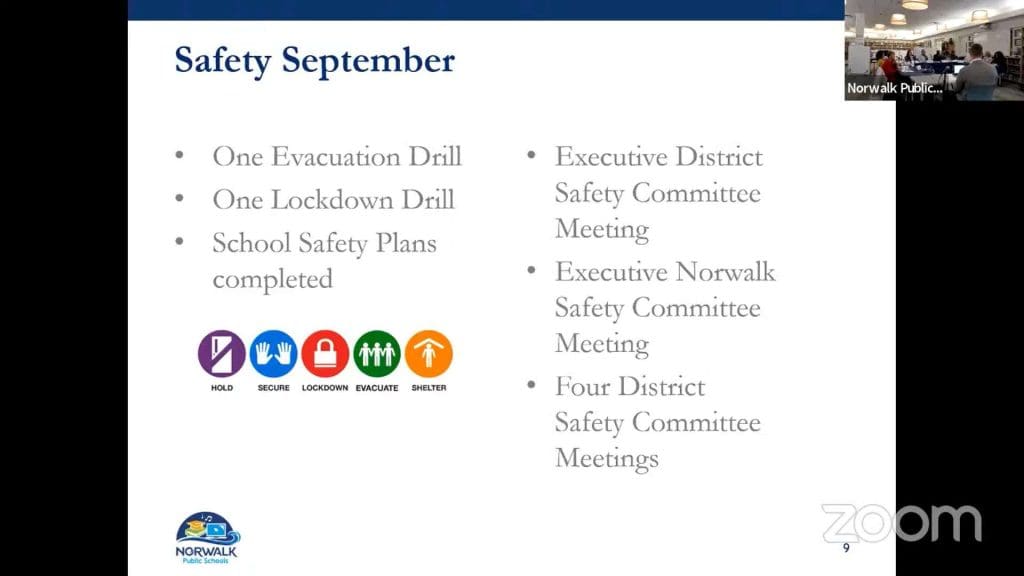 Ryan Harold, NPS Safety & Security Supervisor, presents information to the Board of Education, Tuesday in West Rocks Middle School, as shown via Zoom.

“We do have three levels of safety committees,” Harold said. “It really is all about collaboration, planning, designing and executing, you know, in a major emergency, the first five or 10 minutes is a school-based response. But then it becomes a city-wide, in some situations, a statewide emergency response.”

Last week, the executive safety committee met and members of the fire department, the police department, first responders and emergency management talked through that first 10 minutes, he said. “Then we trickle that (information) down to our safety committee, which is our site coordinators, and they execute at the school level.”

In addition, “The state requires us to have 10 emergency drills, we’ve increased that to 12. So within the first 60 days of the school year, we’ll have two evacuations and two lockdown drills,” Harold said. “…Teachers and staff have provided feedback to their site coordinators to make adjustments.”
NPS is moving away from surprise drills.

“Right now we’re communicating with families to try to try and take some of that emotional and mental stress and burden off of our children or families,” Harold said. “…we’re notifying families in advance on what to expect. We’re including what the protocol is. We’re including instructional videos on so that people are exposed and know what to expect in these new situations, even if it’s just a drill.”

School specific safety plans have expanded to include a community profile about the school, its location and a hazard analysis. A safety and security assessment includes 250 yes or no questions, touching on “the physical space to make sure that it’s in working order everything from broken doors in the bathroom to rubber pellets on a on a playground, but then also goes into the social emotional mental assessment.” 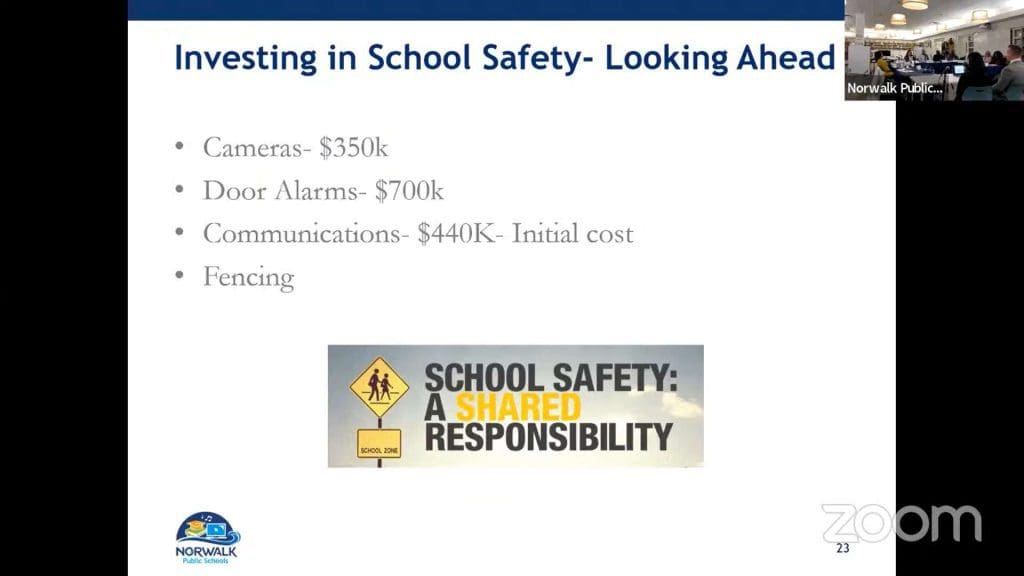 Communication is “the thing that kind of brings us all together,” Harold said.

“Within Mutual Link, they’d be able to digitize all of our frequencies and put them into one spot,” Harold said. “So we wouldn’t need to have this major overhaul of the radio frequencies and radio communication system. This digitizes it and does it for us…. This will connect the State Police, the local police and the school system onto the same frequencies, communicating in real time together.”

The police department gets the school district’s video feeds and has designated radios for an emergency, as well as floor plans, he said. “But this brings it all one in one place in live moments…It really brings all of our communications on one screen, on one frequency, to obviously make the response the most efficient way possible. And in these situations, communication is key. Time is key. So the faster that we can respond to communicate in real time, and those communications be accurate about what’s going on in the situation, ultimately, the better.”

This is a step in the right direction. HOWEVER what happens when we catch the criminals? What happens when we catch those that inflict real harm to our schools!? What happens when we have fights in the school caught on camera!? For the most part the way the laws are now in this State..NOTHING! A slap on the wrist. So until Bobby Boy and his friends stop passing Anti Police legation and we actually get tough on crime all this money is a waste! And we all know how good the BOE is at wasting money! Get tough, have real consequences and punishments for criminals and then spend the money on these upgrades.

Schools used to be a place people could visit. Now you need to go through more security than the President just to visit a school. Not even worth it anymore.

“we have almost three dozen protocols and procedures and systems”

Why so many? This seems like you are wasting taxpayer money, why do you need “three dozen”, seems like you cant figure out which tools you should really be using?

Why so much surveillance? It makes people feel uncomfortable. You only need so much for “safety.”

Perhaps, if Superintendent Estrella would stop having lawsuits brought against her that we have to pay out then we could afford all of these necessary items. This latest one is sure to cost us taxpayers a million plus. Imagine getting mad and demoting a person because of a medical disability which made it necessary for him to use the bathroom a few times during her precious zoom call. Sounds like she needs some SENSITIVITY TRAINING! I remind you she is the highest paid super in the state of CT. Ain’t that some [email protected]&t

I have taken the liberty of including a link to a CNN report from May 29, 2022 relating to the failures by law enforcement at Robb Elementary School in Uvalde, TX. The report indicates that a group of 19 law enforcement officers waited outside the classroom for nearly 50 minutes waiting for room keys and tactical equipment. The resulting delay, as we all know, had catastrophic consequences.

Norwalk is blessed with a highly trained, professional Police Department which our Mayor (and former Chief of Police) likes to point out, and rightfully so, is one of the few departments that maintains an Advanced Accreditation by the Commission on Law Enforcement Accreditation. In spite of the lack of respect and support they get from our Senate Majority Leader, they are the best of the best.

Does anyone really think that 19 Norwalk Police officers would have waited outside a classroom and done nothing if they found themselves in the same active shooter situation? I think not. Did the BOE meet with the NPD following this tragic event to determine what procedures were in place if a similar event took place at one of our schools or did they just wing it like they did with the neighborhood school fiasco. I don’t know but tend to think not.

We used to have 7 SROs until Estrella came on board. So now having 5 is not an increase. We are still down by 2. Under Colin Hosten’s watch security was reduced until a public outcry from parents last year. We still are not back where we were. If we had elected the right Board of Ed members we wouldn’t feel like we have to have a huge public outcry to have something fixed that they broke. Why are the detailed agendas not posted before these workshops take place?

Sounds like a lot of hot air. I’m still hearing that fights in our schools is out of control.