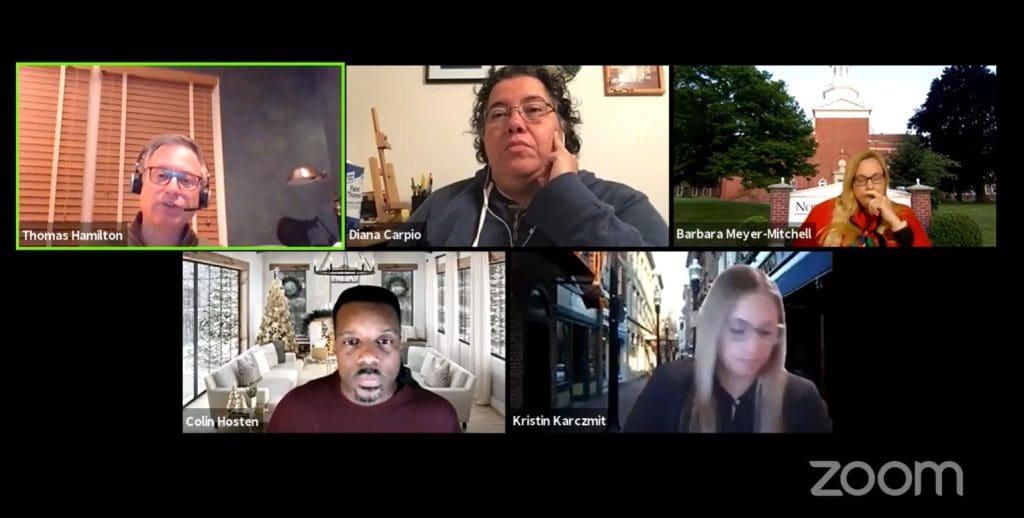 On the other hand, NPS employees will contribute $1 million more via their premiums in the coming year, he said. But contractual wage increases will add about $4.3 million to the budget.

This was the Board of Education’s first look at the coming budget cycle. Superintendent of Schools Alexandra Estrella has new initiatives but NPS is “scrubbing the budget as thoroughly as humanly possible” to fund them through savings, Hamilton said.

“The purpose tonight is not to sort of release the budget, or to present the budget in any way, shape or form,” Hamilton said to Finance Committee members. “It’s really just to give you a heads up as to what are the, you know, what are the major financial drivers behind the budget? And then what are some of the new things that we’re looking at and working on? …We’re not prepared tonight, certainly, to lay out actual numbers. It would be premature for us to do that, frankly.”

“We are finding that the health insurance is likely going to be a major driver of next year’s budget for us. And there’s a number of factors that are really coming into play,” Hamilton said.

NPS switched from self-insurance to a state health care plan, Connecticut Partnership 2.0, in June 2017 to resolve that year’s budget crisis. At the time, it was noted that the state was using the same rate for every community but Hamilton said Wednesday that the state has “decided that that was not a sustainable and ultimately appropriate way for them to set the pricing on this health plan. And they have now moved to a regional, regionally based premiums based on the counties.”

“Our health insurance consultant is saying we should anticipate a three and a half percent increase,” just based on that state wake-up call, and it will also go up next year as the state phases in the increases, Hamilton said.

That’s in addition to the 8 percent increase indicated in the preliminary projection from the school district’s health insurance consultant, so the total increase is 11.5 percent, “which translates into about $4.1 million of additional expense,” Hamilton said.

“We also have more employees who are on the health insurance plan. A year ago, we were carrying 1,454 employees were now up to 1,502 employees. So that’s 48 additional employees, which translates into an additional cost of about 1.1 million,” Hamilton said. “So that’s another factor that’s driving health costs.”

NPS has been using what’s left from the self-insurance fund, and “in the 2020-21 budget, we were drawing down the last portion of that insurance fund where there roughly $2.7 million available in the insurance fund,” he said. That money’s been used and won’t be available to help with this budget.

“Now there are some offsets because if you add those numbers up, it adds up to more than 6 million,” he said. For instance, the employees premium cost shares are going up 18 percent, “so we are anticipating our employee premium cost share will be going from approximately $5 million to $6 million.”

Then there’s about $400,000 in grants, but “the long and the short of it is… we anticipate in the range of about a $6 million increase in health insurance, which is, you know, obviously, pretty significant.”

There’s another budget trick coming home to roost: this year NPS carried over $1.5 million in unspent funds from the previous year but the NPS Finance Department is not assuming there will be a surplus this year, according to Hamilton.

“If that assumption ultimately holds true, then that’s another $1.5 million adjusting factor between the current year budget and next year’s budget,” he said.

Estrella wants to have literacy and math specialists in all of Norwalk’s K-8 schools, Hamilton said.

“Another area of priority for the district, going into next year’s budget is parent engagement,” he said. “… Of course, a focus on equity and diversity and inclusion is an important initiative that the board is certainly well aware of and, and looking at what that might mean, in terms of any potential needs, that would need to be budgeted next year.”

The district is also going to focus on student attendance and on instructional leadership and development, he said.

“Our objective is to fund program improvements, through reprioritizing existing funds through identifying areas and ways to save money in the existing budget to cover those costs,” Hamilton said.

“There’s a lot of moving pieces, currently, at this stage in the budget,” Hamilton said. “…And, you know, it’s not settled. But we certainly have a direction that we’re moving in.”

Board of Education Chairman Colin Hosten responded, “Even the high level, you know, big picture, look at what’s kind of driving some of the major budget decisions is very helpful.”

Hosten said it was great to hear the steps being taken toward equity, literacy and math specialists in in every school and efforts to improve parent engagement. As for health insurance costs, he said NPS was going to examine what results might be gained by going back to self-insurance. He asked if NPS could collaborate with the City and seek bids for an insurance program for both City and NPS employees.

“There’s a number of options that we can look at, and I have asked our health insurance consultant to start to evaluate those options for us,” Hamilton replied. “… And I absolutely agree that it does make sense to, you know, to talk with the City. I’m not sure that there’s going to be any better place for us to be than the state partnership plan. You know, that may, in fact, be the best place for us, even with the increased costs that we’re looking at, but it is certainly something that we need to take a look at.”

Isn’t it just great that Bob Duff got us all that money we have been owed in ECS?! OH Wait! It’s only a few Million phases in over 10 Years! That’s really standing up for you right?! But keep voting for Do Nothing and Bad Decision Bob and this is what you get! And where will Norwalk come up with all this needed extra funding?! Raise taxes in an Election Year?! HA! Here come the cuts be prepared!

Who in the private sector get benefits like that and why are those that actually pay the bills not pushing back?

I really feel violated this morning.

This is pretty dreary news on a very beautiful day. There are so many questions that need to be answered. The first is whether or not the state of Connecticut should be in the insurance business. If this is any indication the answer is a resounding NO. Our State Comptroller (Kevin Lembo) is an example of why voters need to pay attention to who they vote for. He’s a well meaning guy who simply has no idea what he’s doing. Not to digress, but Kevin received his degree on line. (No offense to on-line degrees but if you’re running a multibillion dollar business you’d probably want someone who actually attended a university to manage the money.) Norwalk was suckered into this Partnership on false pretense and needs to get out ASAP.
Kevin and his fellow Dems are now selling CT on the Public Option for personal health coverage. As a Consumer Activist would caution, “Caveat Emptor”! For those who didn’t pay attention in Latin class – “Buyer Beware”! Again, Kevin Lembo means well. He’s just not qualified. Keep in mind, we are in the middle of a pandemic and he’s pushing Health Insurance for Pets. Is this really a way to run an airline ?? Holy Cow.
Back to Norwalk — Another dance awaits taxpayers and the Board of Ed. Norwalk simply can not afford to keep spending and spending and spending. Bob Duff and company have let us down on ELL funding. We are probably spending $ 30 Million per year on ELL students with practically NO help from Hartford. Where’s the Beef Bob? Although I hear you throw a terrific Ice Cream social I’d prefer Beef. The kind that Norwalkers elected you to bring home. What we get is more like Corned Beef Hash — Try living on Corned Beef Hash for a month…
Note to John Kydes: I would appreciate clarity on your position regarding what will be a Ridiculous ask by the Board of Ed…

I called this years ago when we were forced into the state’s plan or else we would have faced massive layoffs. Sooner or later, you have to pay the piper. Fortunately Trump killed the Obamacare Cadillac tax or else we would be out another 3 to $4 million on the Obamacare surcharges on gold plated plans. There is nothing Norwalk can do here without legislative overhaul in CT, but don’t expect it any time soon.

Not entirely unrelated, but to give you an idea of who is managing our finances…..

The new 12 week paid leave program who’s benefits begin in 2022 but starts taxing our payrolls on 1/1/2021 has a brand new system and bureaucracy to collect and manage these funds.

What is incredible is that our DRS already has a payroll tax system. It would have been a simple code change to have another line item for this FMLA tax. Similar to how the sales tax system is updated year in and year out when new items are subjected to sales taxes, all they had to do was create one simple line. Instead we have a brand new system, no doubt staffed with friends and family members of the people “standing up for us”.

I am not looking forward to paying extra to make up the difference from the poor planning of the insurance coverage, or the difference we need to pay to make up the shortfall between what the state will give us and the increasing cost estimates for the new high school. Didn’t any of the elected people see that when you make drastic changes to how the insurance is funded, or providing a new high School building to replace one that does not need a total replacement, has a negative affect on the taxpayers? It didn’t dawn on them when they were posing for pictures and giving interviews to mention that they were not aware of all the consequences (after all if they had been, they never would have negotiated those contracts)? I hope some one is bright enough to not offer additional massive tax incentives to developers or others; too many of those recipient’s have either left town prior to full assessment payments becoming due, or sold to others looking for the same kick back. When I relocated my home from out of state, no one offered me lower taxes. But to keep spending more due to mismanagement, I’m sorry but its going to push me out to a different part of Connecticut to live. And I do like Norwalk.

What kind of insurance plan are we taxpayers funding ?

Did anyone at city hall do any research or bidding or is this the usual waste in big government ?