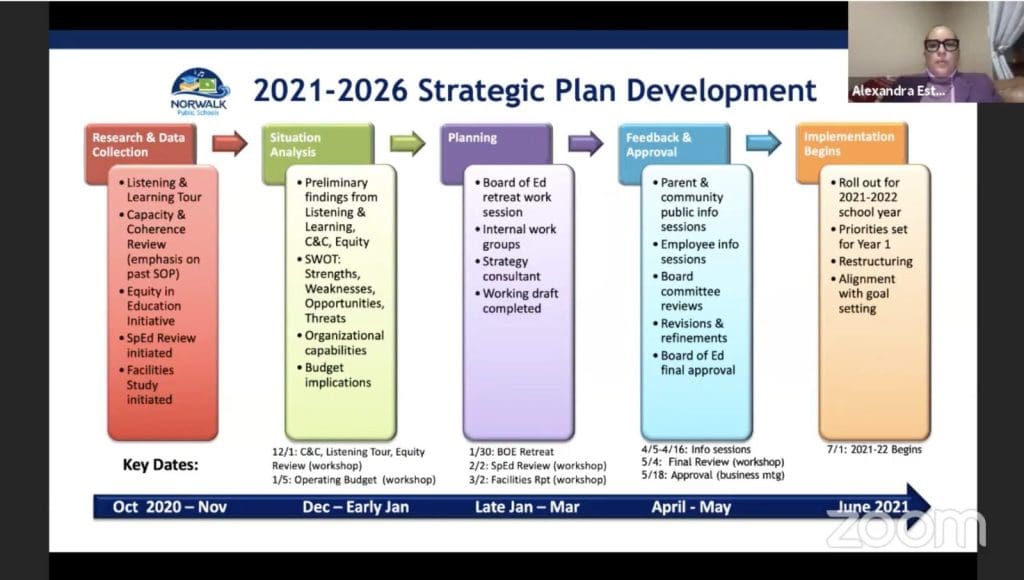 Norwalk Superintendent of Schools Alexandra Estrella discusses the effort to create a new strategic operating plan, during Tuesday’s Board of Education meeting.

NORWALK, Conn. – The Connecticut Center for School Change was tasked with three main areas to study in the Norwalk School District: capacity and coherence, a strategic operating plan performance review, and a central office review.

“It’s important to note as we go into the findings of all three of these studies, that you’re in a unique context, you’re in the midst of a transition,” Executive Director for the Connecticut Center for School Change Richard Lemons said at Tuesday’s Board of Education meeting.

The nonprofit whose stated mission is “to improve teaching and learning, to reduce achievement gaps, and to promote equity in Connecticut schools,” was brought in by then-Superintendent Steven Adamowski to be an “honest broker” of how the district was meeting its goals, how coherent was the district in its operations, and how was its central office operating.

The study was just one that is a part of the district’s plan to collect data, engage in different listening and learning conversations, and ultimately use all of them to create a new strategic operating plan for the district for summer 2021, Norwalk Superintendent of Schools Alexandra Estrella said.

“All of this information collected will provide us an opportunity to engage between the months of December and January in an intense analysis of the current state of the district that will allow us to start planning and designing the new strategic operating plan with the goal that by the end of April in May, we will have gathered feedback and comments from the community for the board to engage in the final approval of our new strategic operating plan,” she said.

‘It was intentional, but may have had some negative consequences’

The goal of the capacity and coherence review is to examine how coherent a district is with its goals from teachers to administrators, Board members to the community, and how that impacts its capacity and ability to improve learning for the students, Lemons said.

Educators, in their responses, spoke of the instability prior to Adamowski’s tenure, given the constant turnover in leadership.

“Prior to the previous superintendent, it was the wild west out there,” a teacher’s response read.

One of the biggest areas that came up consistently was the district’s “portfolio/choice system” which allows each of the schools to provide different offerings to families, but also could create some inequalities between the schools, Lemons noted.

“We recognize that your portfolio choice model is a big part of the story of understanding what the priorities are in Norwalk,” he said. “In Norwalk, you’ve created a system of choice where the power and influence and decision making is at least partially pushed down to the school level. And that means that there can be a lot of different priorities going on in different schools and in different departments. And we just wanted to acknowledge that this was done in part by design, it might have some negative consequences, it might have some real positives.”

Under questions related to culture, educators said that in the last few years the district has “focused on performance and improvement,” particularly on areas with “measurable outcomes.”

While this was a source of pride for some, the focus on “metrics” also raised some concerns for educators and board members.

Board member Barbara Meyer-Mitchell questioned what other metrics districts use to measure success compared to standardized tests, particularly since the study found that many said metrics were high priority.

“You talked about the culture of analytics and our assessing ourselves based on how we’re doing on standardized testing,” she said. “What are some other ways that other districts measure success that might be less analytic and more subjective?”

While Lemons didn’t have a specific answer, he said that heard this from “enough people” in the district who were raising similar concerns.

“What we heard from some educators in Norwalk it was like, ‘that’s what we’re about. We’re about beating the other districts, more so than we’re about meeting the needs of all our students,’” he said. “Not that those are mutually exclusive, but there clearly was an incentive system that put a lot of emphasis on the metrics and some people internalize the story that the metrics were more important than humans.”

Still, district educators also expressed pride for what the district has achieved in the past few years.

One comment read: “Look at how we’ve moved in the state accountability system — we are moving faster and further than the other CT cities. There is a lot of pride and satisfaction about that.”

Lemons said that there was a “broader accountability system” that came along with some of the focus on metrics and outcomes.

“That had a cultural impact on the identity of the district and what people think when they’re working with them,” he said. “There’s quite a bit of pride that some educators expressed when they were interviewed and when they were surveyed.”

Still, because there has been a lot of change in the district, there was a feeling of “initiative fatigue,” with too many changes and ideas being tried out at the same time.

The study noted that the district “emphasizes school variation and flexibility over system coherence and alignment. Unlike some districts that try to reduce such variation, Norwalk purposefully fosters it in an effort to incentivize performance.”

Under that flexibility, principals noted that they “appreciate the flexibility and defined autonomy that allows many personnel and programmatic decisions to happen at the school level.”

“Your management approach and having a portfolio and choice system that emphasizes variation and flexibility over system coherence and alignment is an important part of the story,” Lemons said. “Because in other districts alignment means ‘we’re all moving at the same pace, we’re all moving in the same direction. We’re all moving on the same themes.’ And that clearly wasn’t what we heard in Norwalk. And again – by design – we’re not passing judgment on this is part of how you’d approach the work.”

Lemons said that this meant teachers and staff feel that much of the “real action” in Norwalk happened at the school level.

“That’s where ingenuity and creativity and problem solving might happen,” he said. “And that means that we might have a lot of people doing very different things across schools in the system. We’ll talk about some of the concerns that some of the educators have over time about that, but among many people that was a source of pride, and a part of the culture but also part of the story of how we aligned the system.”

One of the frustrations expressed in the survey was a lack of coordination and communication in Central Office.

“Not clear that all offices in Central Office talk to each other,” a comment read.

Collaboration in the district happens more with individual relationships, rather than a “systemic approach” or “routines” that bring schools and buildings together.

One downside of variation between the schools that educators noted was that it can “breed inequity for students” depending on what school they went to.

The district’s changing demographics over the past 20 years or so are “directly challenging established practices, expectations and beliefs,” according to the study. Respondents noted that while the principals are diverse, the teaching staff is not as diverse and is “not representative of the student population.”

Goals that were not met:

One of the notes the study found was that there is “wide variation in performance among schools and groups of students,” and determined that “this variation warrants additional attention.”

The main goal of this area of the study was to answer the questions: “How does the structure of Norwalk Public Schools compare with other school districts of similar size and composition?” and “What is known about the efficacy of different central office structures?”

After analyzing the study, the Connecticut Center for School Change issued recommendations and “opportunities” for the district to explore including:

Estella and Board Chair Colin Hosten emphasized that this data would be a part of how the district plans moving forward. 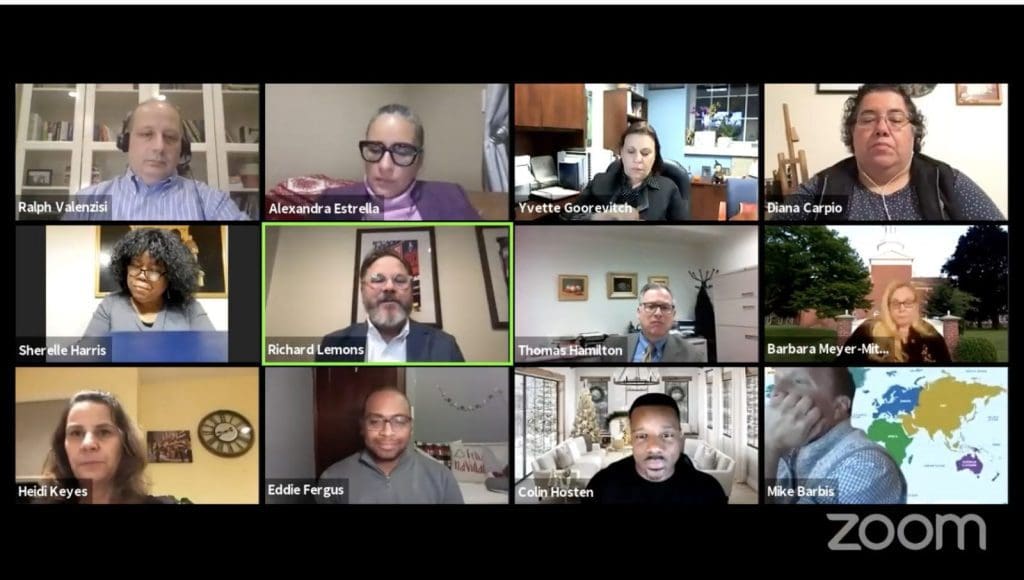 Tuesday’s Board of Education meeting.

Closing the achievement gap is a laudable idea…..as long as it’s not achieved by reducing enrichment programs, sports, and the arts. I’m afraid this district will Reduce the gap by holding kids that are prepared to excel from doing so.

Because Superintendent Estella’s focus is “increasing equity” wouldn’t one area be in helping our second language learners to learn English on a level where they can compete equitably with our native speaking students. Early intervention and immersion into the English language will help support them in their studies before they have to tackle intensive academics. Lets immerse them in an English program before they drown in the classroom. Secondly on Superintendent Estella’s goals is “better engaging the entire community” (I define community as staff and parents). How better to involve parents and the staff then by choice. When you have a choice you have a stake in the game, You have a desire to be successful. You have a voice. Let’s have choice through out the school system for parents to send their child to a school that focuses on science or math or the Arts? Or perhaps Black/ African American studies? Perhaps some parents would prefer their child to go to a school that wears uniforms and focuses on structure because they feel that’s best for their child. Or neighborhood school,if desired.
Parents know their children and they would be more involved in their child’s education if they had a say in it. Even staff (teachers) would be more excited about teaching if they could choose the focus of their teaching)
It’s understandable that busing students through out the town would be very expensive but perhaps getting parents invested in the solution can help solve the problem. Perhaps a grant could be found to pay for the added cost of transportation? I understand that it costs $90,000.00 a year to run one bus. That sounds pretty outrageous.
On a positive side, all these details can be creatively worked out.