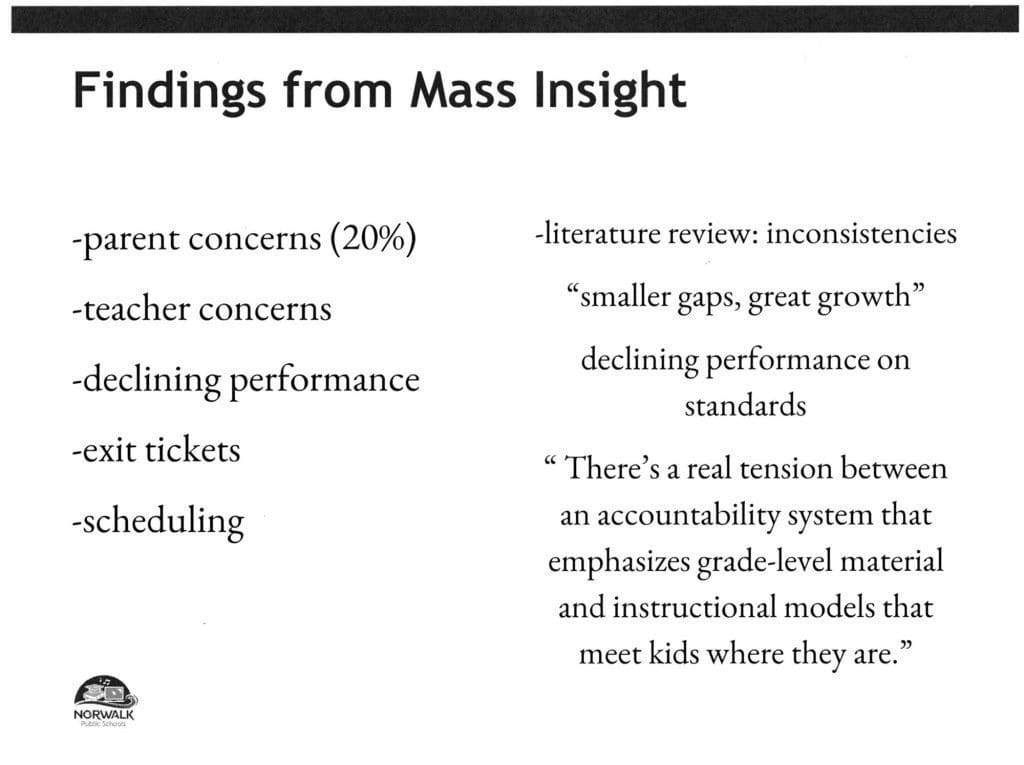 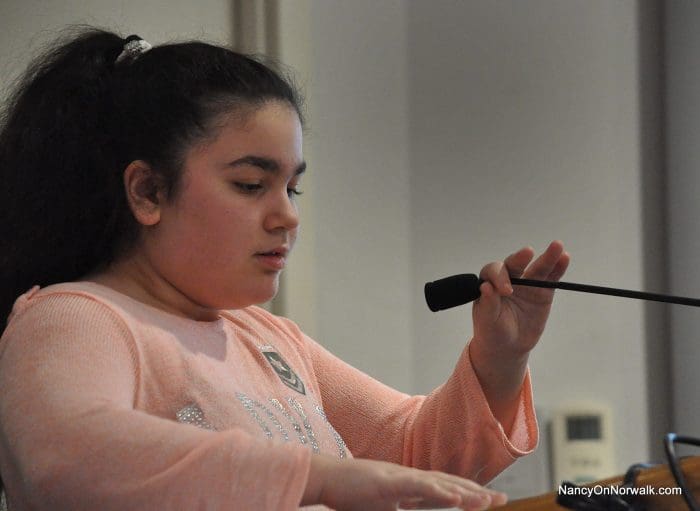 Emma Aponte speaks to the Common Council, early in 2018. She’s getting her wish: a new math curriculum in the fall.

NORWALK, Conn. – The Teach-to-One math program, once highly touted by Norwalk Public Schools, is in the process of being dumped due to poor performance.

Teach-to-One never spread beyond Nathan Hale Middle School after starting as a pilot program in 2015-16. It’s likely to be replaced by Illustrative Mathematics, not just at Nathan Hale but in five elementary schools and in two high school sections. It’s also thought that interventions will be stepped up.

Eliminating Teach-to-One is a “great idea,” Board of Education Curriculum & Instruction Committee Chairwoman Sherelle Harris said Tuesday after her Committee voted unanimously to make the switch, on the recommendation of NPS Chief Academic Officer Brenda Myers.

“Sometimes you have to give it three years to see what’s really happening, to see if something’s really working,” Harris said. “But it’s not working.”

Teach-to-One offers personalized math instruction for every child, via computers, NHMS Principal Albert Sackey said in March 2017. Superintendent of Schools Steven Adamowski encouraged BoE members to go see a TTO class in action, saying, “I think you’ll be extremely impressed. I think you’ll also see students are learning to become independent learners, the confidence level of students in a subject that is not the natural inclination of many of us. It is incredible.”

NPS hired Mass Insight Education & Research to review TTO, which began in 2015-16 as a sixth-grade program and expanded to all grades the following year.

“Despite early signs of success at Nathan Hale, it is unclear to what extent the curriculum is advancing student learning,” Mass Insight wrote in its December report.

“The School Performance Index (SPI), math, has remained largely flat the past three years – trailing the district and state and under the target of 75 (57.8 in school year 2018-2019),” Mass Insight reported. “Math Smarter Balanced Growth has declined for the past three years. In 2019, Nathan Hale trailed the district by another 10%. And nearly 50% of Nathan Hale’s students are not meeting growth targets in math (school year 2018-2019).”

The program’s “rapid expansion caused growing pains including a lack of fidelity to the model,” the consultants reported, crediting Nathan Hale for working to solve scheduling barriers and partnering with TTO consultants to provide professional development to teachers.

The fact that half the students didn’t meet growth targets in math in 2018-19 was “particularly striking given the premise of TTO – personalized learning to meet students where they are, and close skill gaps,” Mass Insight wrote. “It is unclear why so many students are not meeting their growth targets.”

And, “In cases in which students begin far below grade-level, it is possible that they are not making up enough ground to ever achieve grade­ level content on the TTO platform,” Mass Insight reported. “Without the access to, and practice with, grade-level content (even with looming skill gaps) students are unlikely to achieve success on state assessments with grade-level content they have not been exposed to.”

With the program eliminated, the money will be used to “help support K-8 math implementation,” she said. “… Now we’re using those resources to support the district.”
Harris said the added interventions will be Math 180, which already used in other schools. The Nathan Hale students will “definitely” need the interventions in addition to the new curriculum, Illustrative Math.

“TTO is boring and repetitive,” she wrote. “You are stuck on the computer all day bored. Some of us don’t even do math, we play games. Math is suppose to be fun, but because of TTO it is now a chore.”

On Wednesday, she wrote to NancyOnNorwalk, “When I heard TTO is going to removed next year, I screamed with joy. Finally, my classmates and I can have a decent math education.   I am so happy we will be getting our teachers back.”

This post was amended at 4:43 p.m. to replace the illustration.

All of the middle school redesign was a pretty bad idea. The whole system should be redone. Go back to smaller teams that can provide more academic support and social and emotional support versus large class sizes that are seen every other day for continuous inconsistencies in curriculum delivery.

You have to love this: “I am so happy we will be getting our teachers back.”❤️❤️

My comments and support of eliminating Teach To One math are in no way reflective of Nathan Hale Principal Al Sackey’s judgement. Some programs work in some settings and not others.

When this program started, most teachers felt it was not an effective program. In fact, two years ago, several of my students, 7th graders at Nathan Hale, wrote research papers on the negative aspects of an open classroom, and the ineffective impact of TTO on their math education. Yes, I shared their reports. All anyone had to do was to watch the chaos in the TTO classroom. The teachers worked their hearts out trying to make this program work, so it is no reflection on them. Why didn’t anyone listen to the students and the teachers who knew from the beginning that this was not the way to teach and learn math? I am happy to know the program will end, but it should not have taken this long. Spending three years watching math scores to see if the program works has really damaged math education for these students.

I’m sure every one has some kind of recommendation, some remedy to poor performance of students. I won’t comment on the invasion of think tanks, and revolutionists,tearing away on the basic and classical way of teaching of rudimentary subjects in time memorial, attacking it with their transformational ideas in the social sciences, over many, many years that rewrote histories, and rejected the founding of the nation.

TTO was used at Columbus Magnet too. I believe Nathan Hale showed exceptional performance improvement in it’s first year but while it seemed to hold out incredible potential it had many limitations. I applaud NPS for trying it and applaud it for knowing when to stop. It seemed to have incredible potential and maybe someday the limitations will be ironed out but for now- it seems wise to move to something else

One has to wonder why a program such as Teach-to-One, once touted by our esteemed Superintendent as “incredible”, was allowed to continue for years in spite of,the best efforts of the schools to implement it when students such as Emma Aponte and teachers such as Carol Burgess and her students made it known that it was not working, which was validated by the declining math test scores. While some of us no longer have children in the school system we still pay property taxes, nearly 70% of which are used to fund the operation of the NPS. Hopefully, when the BET and Common Council approves the next school spending plan, they will consider Emma’s “I’m so happy we will be getting our teachers back” and actually ask for input from students and teachers like Carol Burgess rather than relying exclusively on the BOE elites and their consultants.

Maybe now that TTO is gone, Nathan Hale will be able to get their
REAL Library back, so the students will have a full functioning library instead of what they have now!