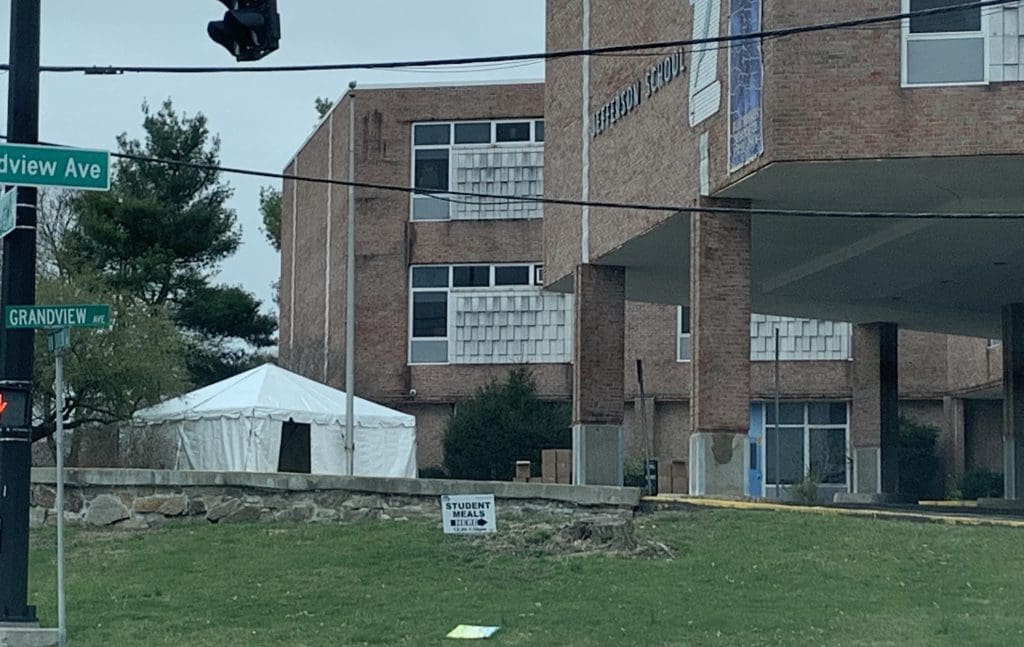 Hamilton, in speaking to the Board of Education Finance Committee, said NPS thinks it will spend $790,000 of the $2 million expected from the federal government on reopening expenses at Title One schools. The rest of the money is already accounted for by summer learning programs and technology expenses.

He also touched on the surprising amount of money NPS is being charged for unemployment payments, even though NPS has not laid off employees during the pandemic. The bill was $130,000 in March.

NPS does not know how much money it will receive from the state’s reopening fund, he said. Hamilton pegged that pot at $166 million; the Connecticut Mirror said it’s $266 million.

The $20 million estimate for NPS reopening, submitted to the state on deadline for a reopening plan, did not factor in using Jefferson, he said. “So there’s some additional expenses related to Jefferson that we, at this point don’t have in here.”

Jefferson’s student body has been slated to attend the newly expanded Ponus campus, as Jefferson is set to be renovated. Norwalk Building and Facilities Manager Alan Lo said Tuesday that construction would not be delayed if the COVID-19 use of Jefferson happened in the fall semester, but there might be complications if it goes into the spring.

NPS is looking to put fourth and fifth graders at Jefferson, Council member David Heuvelman (D-District A), a member of the schools reopening task force, on Tuesday told the Land Use and Building Management Committee.

It’s looking like NPS will be at 75 percent capacity, based on the responses to the call for families to register their children for the school reopening, Heuvelman said. The deadline for that registration was extended and about 80 percent of NPS families have responded.

So, 25 percent of Norwalk’s school children would be engaged in distance learning under that scenario.

He continued, “The principals are working very hard to attempt to figure out how we get these classrooms into a situation where they can put that six foot distance or put partitions between the kids. They don’t know yet that Jefferson is going to be needed. But the discussion today was that they think they’re going to need it for a number of classrooms, but how many they don’t know.”

“When I first heard that they may need Jefferson, I kind of fell off the chair,” Lo said. “But I got up really quickly. And I looked at the schedule. If they are looking for the fall semester has no impact on us at all.”

Construction has been planned to start in the late January or early February, but the completion date is March 2022 and the children wouldn’t return until the following September, so there’s wiggle room, Lo explained.

“There’s some challenges for us from a construction perspective … but it shouldn’t delay us,” Lo said. “We just have to work hard to get it done in timely fashion.”

There could be additional expense, but “we believe the city will get better pricing” because with COVID, there’s not a lot of construction work being done, Lo said. “If we delay for six months, I think we still have the benefit of the slowness of the market … I don’t believe we have a major concern. And it’s all manageable.”

NPS is expecting $2,084,000 in federal CARES ACT funding, Hamilton said. The district expanded its summer programs in an attempt to compensate for the distance learning struggles some students faced, and the total cost of that is $2.7 million.

“That includes teachers, that includes paraprofessionals. It includes fringe benefit costs that go along with that. It includes transportation. It includes some security services and consulting services and supplies and materials as well as PPE and other expenses associated with opening the hybrid program we opened in, in the COVID environment that we’re presently in,” he continued.

There are multiple grants and $874,306 in “local money” to support the programs, he said. The budget will be balanced with $529,351 from the ESSER grant, a.k.a. the federal Elementary and Secondary School Emergency Relief Fund, he said.

There are federal regulations “about being required to share some resources with private schools,” he said. “So in order to maximize the resources that are available to the  Norwalk school district, we have made a determination to use the ESSER funding essentially just for our Title One schools, because that is the way to reduce the amount that would otherwise have to go to private schools.”

In May, the Board of Estimate and Taxation approved a $1.6 million special appropriation for technology to fund laptops for the City’s youngest students and for 300 of the district’s teachers. Hamilton said NPS can use ESSER funds to reimburse the City $760,000 for the tech at the Title One schools.

That leaves the $790,000 to be spent for the Title One schools fall reopening expenses.

NPS needs to be prepared for 100 percent of its elementary school students to come back for in-person learning, Norwalk Superintendent of Schools Alexandra Estrella said Wednesday. Title One schools will use Jefferson and an on-site administrator will be needed, along with a nurse and security. NPS also needs additional furniture because the circular desks won’t support social distancing. Orders have also been submitted for Plexiglas.

NPS is estimating that it used 98 percent of its 2019-20 budget and projects a $4.2 million surplus, Hamilton said. It’s been expecting to ask the City to rollover $1.5 million and to repay $1 million for the English Language Learner expenses it incurred this year.

“The very good news out of all this is that even after those two items, there’s still some additional funding that’s available,” Hamilton said.

Estrella said she’s hoping to speak with Mayor Harry Rilling, the Common Council and the BET to explore the possibility of using some of those funds to cover COVID-19 costs.

NPS is putting a hold on using consultants until it “gets clarity from the State on how much money we’re going to get,” she said. “…As you know, we requested $21 million approximately, to address all the costs associated with the redesign of our program, but there’s no guarantee we’re going to get those resources.”

“This did catch us by surprise, and we are looking into try to understand exactly where this unemployment exposure is coming from and how it is, you know, flowing through to us,” Hamilton said. “…The CARES ACT and the Governor’s executive order said we had to keep everyone on payroll and we did. So that’s why it surprised me. I didn’t see this coming.”

He explained that if someone formerly worked for NPS in food services or as a substitute teacher and then got laid off from another job, then NPS “will pay a proportionate share of that unemployment based on the amount that we make up of their total compensation over this look back period.”