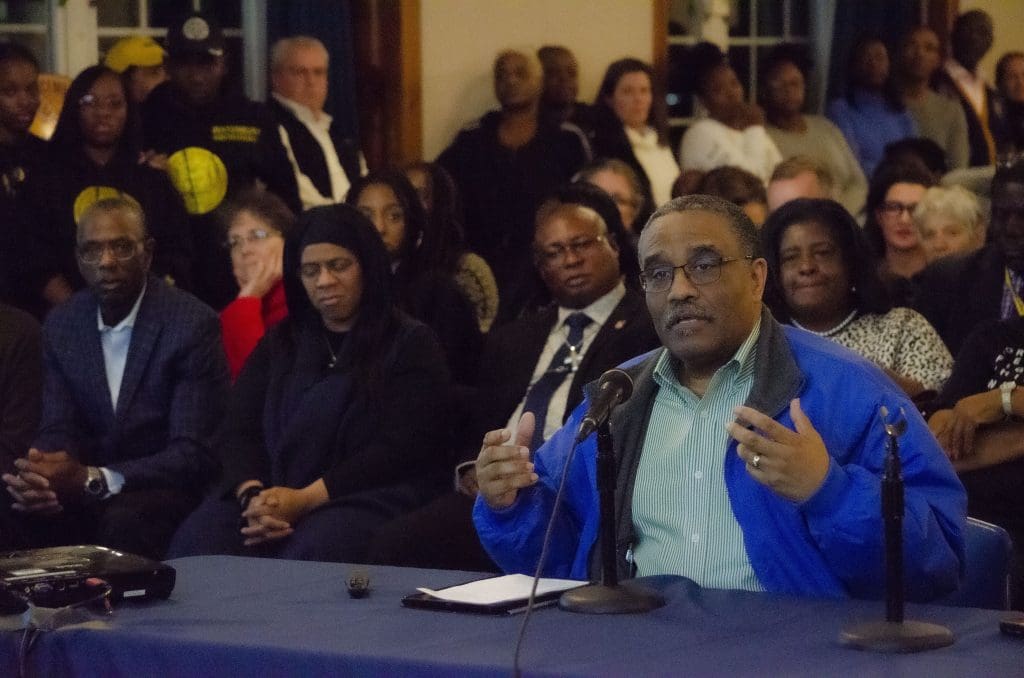 Former State Rep. Bruce Morris speaks to the Norwalk Board of Education, Nov. 19 in City Hall.

NORWALK, Conn. – The lawsuit filed by former Norwalk Public Schools Human Relations Officer Bruce Morris against NPS has prompted numerous court filings this week, including one that estimates 10-12 days of jury selection and a 10-14-day trial.

Morris accuses NPS of racial discrimination, retaliation and discrimination against him because he was then a State legislator, in the 2016 termination of his job and in prior actions dating to 2012. NPS states that his job was eliminated due to budgetary concerns.

Although the State Judicial website states that the trial is scheduled for Jan. 15, it’s actually going to occur in May, former BoE Chairman Mike Lyons said Thursday. Morris’ attorney, Daniel Angelone, on Thursday filed for a continuance on the jury trial.

NPS, in a slew of documents filed Wednesday, is seeking to prevent Morris from using certain communications as evidence, including the email written by Mike Barbis on June 5, in which he states that the BoE has spent three years trying to build a school in South Norwalk but been “F— at every turn,” by Morris and others, and ending with the phrase “Blacks f— Latinos.”

A June 3 hearing in the case focused on emails sent by then-BoE Chairman Lyons in 2015, in which Lyons referred to a possible “race war” if Morris were let go at that time and called Morris a “snake.” NPS seeks to block those emails and others sent by Lyons, asserting that these are “stray remarks” from Board members who were not decision makers and therefore irrelevant.

Judge Alex Hernandez in June showed no sympathy with NPS position on the emails, asking “Race war? … Doesn’t that comment interject the question of racial discrimination into the decision-making process?”

Court documents submitted Wednesday include a deposition by Lyons, in which he states that he called Morris a snake because he thought Morris’s “primary concern was furthering his legislative career and own financial well-being,” directly impairing his performance in his “well-paying” NPS position. In Lyons’ eyes, Morris felt untouchable due to his political connections in South Norwalk.

Lyons points out that he was critical of administrators he saw as obstructing progress, be they Caucasian or minority, and also praised the hiring of Michael Connor to be Chief Academic Officer. “During my time on the BoE, I have personally supported the appointment of twelve African-American administrators, and four Hispanic administrators, including Norwalk’s first-ever minority Superintendent, Manny Rivera,” he stated.

In another document, dated Jan. 18. 2016, Lyons reports that Adamowski described NPS as a “mess,” despite former-Norwalk Superintendent of Schools Manny Rivera’s best efforts. There are many emails submitted as evidence to back up NPS’ claim that Morris was terminated due to budget cuts.

Morris is also expected to file documents soon. The NPS documents include testimony from Morris, who stated that he’d never felt stress like he did under NPS Chief of School Operations Frank Costanzo before and suffered from nightmares that caused him to strike his wife. “This was really life-changing,” he said

Morris plans to call 22 witnesses; NPS has 10 witnesses on its list.

NancyOnNorwalk asked Board of Education Chairwoman Sarah LeMieux if NPS might settle out of court. She replied, “I think it’s probably best practice for me not to comment on litigation.”

I don’t know why, but as I read this the word extortion comes to mind. Has anyone been in contact with Ukraine?

This all happened after I retired & relocated. But, aside from my own feelings in my time working for the NPS that Morris was a “reverse racist”, wasn’t he in a job requiring a Masters Degree when he only had an Associates Degree? And didn’t he have an arrangement with Dr. Corda that he could attend State Legislature meetings on NPS time as long as he put in the required # of hours? A Human Relations Officer in a school system needs to be available when school is in session. Not much help knowing he was there at 11 pm.

There may have been loads of reasons that Morris shouldn’t have been in the position but once he was he deserved due process . I’m not a Morris fan but I think he’ll win this case and am amazed by the gross recklessness of some of our board members. I hate the idea of a boe member becoming
Financially liable for their acts but in some cases they are so egregious that maybe there should be an exception .if BOE members are foolish enough to say this in emails what are they saying in private ?

I am not a Bruce Morris fan at all, but my aversion to this BoE’s nasty comments (about so many employee) makes me favor a large settlement for Bruce.