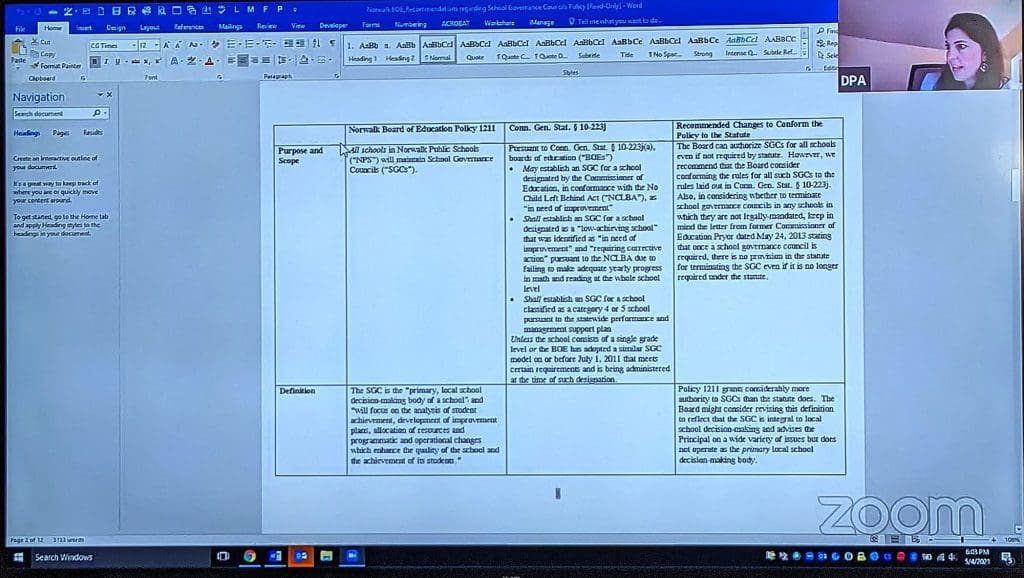 NORWALK, Conn. — Norwalk School Governance Councils, instituted five years ago as a way to guide individual school development, may be scaled back under the current administration.

“The policy really gives a lot of authority to the School Governance Council that’s not provided for in the law,” Attorney Dori Page Antonetti of Shipman & Goodwin said at Tuesday’s Board of Education Policy Committee meeting.

“On the surface, this appears to be a way to minimize parent involvement in our schools,” said Kelly Turner, one of seven parents who submitted public comment for the meeting, all of them objecting to the proposed changes.

When Norwalk Public Schools moved to have School Governance Councils at every school in 2016, Policy Committee Chairwoman Heidi Keyes said they were “a way of giving autonomy to parents and staff in a clear and unwavering voice as a cohesive decision-making body. There will be shared responsibilities within their own schools.” Then-Norwalk Superintendent of Schools Steven Adamowski and then-Board of Education Chairman Mike Lyons said that the policy would likely be tweaked.

Tuesday’s discussion was a first peek for the Board of Education, with Keyes emphasizing that the Committee was “strictly just kind of looking at some of the legal advice,” the statutes and the recommendations Shipman & Goodwin had made.

A Freedom of Information Act complaint had been filed, prompting concerns and a desire to make sure Norwalk’s policy was in alignment with State statute, Norwalk Superintendent of Schools Alexandra Estrella said.

Antonetti explained that some schools have mandated SGCs, while at other schools it’s optional, and the 2016 decision had expanded SGCs to all schools. BoE member Mike Barbis, who is not on the Policy Committee, said the State created the statute under No Child Left Behind, “which is gone now, but there was no provision to end” the SGCs that had been mandated at lesser performing schools.

The State Department of Education has indicated that there’s “no mechanism for them to be disbanded,” Antonetti said.

“Hartford tried to politicize this,” Barbis said, arguing that Norwalk should be able to set up school governing bodies, and “set them up as we see fit.”

It’s his goal to see that the SGCs that aren’t mandated aren’t “politicized” by aligning them with State statutes, he said.

“On the whole, our recommendation is that School Governance Councils be given recommendation (power) and authority to advise and consult instead of to become the decision makers,” Antonetti said.

It’s possible Norwalk could call the mandated bodies, at eight of the 20 schools, SGCs but give them a different title at the other schools, she said. Nevertheless, they should all be governed under the same policy for the sake of consistency.

State Statutes and the State Department of Education view the SGCs role as “one of participation, consultation, advice giving in a wide variety of areas, but not ultimate decisions,” Antonetti said. NPS could change its language to reflect that the SGCs are “not the decision maker in the various types of matters,” but “that it is devoted to helping the school achieve its mission and vision,” to clarify that they “advise or recommend opinions to the school administration regarding various issues.”

Another issue is the way SGCs make decisions. Currently it’s by consensus or a two-thirds majority, but “we’re recommending that it either be by majority vote, or two thirds majority vote,” she said. It can’t be a consensus because a School Governance Council is a public agency and under FOIA, there needs to be a record of a vote.

Term limits were also a topic. The current policy limits members to two terms, but State statute says four, so the recommendation is Norwalk change it to four two-year terms, Antonetti said.

“The premise also by the School Governance Council is to get lots of voices, for parents to be able to be active participants in their schools, and to be advocates for all,” Keyes said. “I just worried with those longer terms, some of other parents that really want to be active and join will have to wait that longer amount of time.”

“The Council can still appoint committees … those types of things in various areas. Because no matter what, you’re limited in your number of how many people can serve on a School Governance Council at one time,” Antonetti said.

The parents who wrote in spoke of a sense of being sandbagged.

“We were unaware of this meeting until just a couple of days prior,” Jason Penta said. “At no point was this communicated to the SGC or were we invited to be part of the discussion. The lack of collaboration and transparency is extremely disappointing.”

Another parent spoke of “doing (this) quietly in the background and breeding mistrust between the community and the district.”

“What is outlined in the proposed changes seeks to allow the termination of any SGC that is not legally mandated. Why would we cut parents and teachers out? The principals should have decision making authority. However, an important function of that role is communicating with parents and the community,” Jennifer Fritz Romano of the Nathan Hale Middle School SGC said.

“Time and time again, parents have stated that they feel unheard and left out of the process and SGCs helped with this. I feel the Board is in error to change any of the current wording because overall this system is working,” Nicol Ayers said.

Board members thanked the parents for their feedback.

“This is just something that we need to do as a policy, to review everything to make sure that we’re within statutes. It’s not something that we’re just deciding on our own. And that’s why we have a legal expert here to help us with those changes,” Diana Carpio said. “… It’s not that we’re not being transparent. It’s just a beginning of a conversation and changes that we need to do. And hopefully moving forward. You know, everyone will understand why we had to do this. And that’s true of any policy. We had policies that are really haven’t been changed since 1995. So it’s part of the process of just updating everything.”

Reducing SCG power is a power grab by the BOE and the Teacher’s unions. What began as ‘parent power’, turned into insipid ‘school governance councils’ when the AFT, the national teacher’s union, saw what mostly minority parents in Connecticut were trying to do–they cut them off at the knees. http://rishawnbiddle.org/outsidereports/aft_parentpower_guide.pdf

Creating school communities that work for all community members requires shared responsibility. Beyond NCLB requirements, SGCs were welcomed by parents as a way to have a meaningful input into the outcomes of the schools. A lot of that was driven by how to school based budget was allocated. Because of the recent high turnover in school administrators, SGCs have played a larger role in principal interviews. Why is that creating a problem now? Why is there so much administrator turnover this year? What’s changed? Why don’t we see BOE members speaking out? Most school districts are focusing their energies on making sure schools work effectively during and post COVID, instead, NPS and BOE seem to be focusing on undoing much of the work of the past. Seems like a power grab, but by whom???

This new superintendent is bad news, one mis-step after another. She seems tone deaf. People in central office are abandoning ship, she’s trying to take away parent voice, redistrict in secret. Where is the BOE and why are they letting her steamroll these awful things through? Aren’t they supposed to be her boss?

I don’t know Sue Haynie, but my read of this article makes me wonder also if this is an attempt to weaken the SGCs.

School Governance Councils were mandated by law for only some of Norwalk’s schools, but it was a district decision to require that all schools have them. I think most of them have proven to be excellent, helping willing principals to make better decisions, and even playing a role in the selection of principals. If there are any SGCs that have not yet found their way, the district leadership needs to help them get on track. Likewise, if there are principals who haven’t learned how to work effectively with their SGCs, they may also need district guidance and other forms of support.

The attorney said that the NPS policy gives authority to the SGC that is inconsistent with the law, but there is nothing in the law that says that a district isn’t allowed to expand the authority of the SGC within the district. The law sets a baseline of minimum expectations, and I don’t understand how it would be a problem if a district wants to expand upon them, assuming that the expanded authority isn’t expressly forbidden.

In the NON article, there is an error in the attorney’s statement that the NPS policy regarding term limits is inconsistent with the statute. The following is copied directly from the state website, which cites the statute: “Terms of voting members elected pursuant to this subsection shall be for two years and no members shall serve more than two terms on the council.” Therefore, the district’s SGC policy regarding term limits is correct.

I’m disturbed by Ms Carpio’s statement that suggests she has decided that changes to the SGC will be made and that the attorney will help. The attorney is there to interpret laws and to ensure that NPS policies are consistent with the law, not to establish policy. I may be mistaken, but my suspicion is that the attorney was asked to play a role, supporting the superintendent’s and/or the BOE’s wish to weaken the influence of the SGCs. I hope I am mistaken.

Superintendents and BOE members have very challenging work that is sometimes made more challenging by the public and by staff, but the work can also be made easier when the public and the staff feel understood and valued. Right now, at least some NPS parents and staff aren’t feeling that way at all.