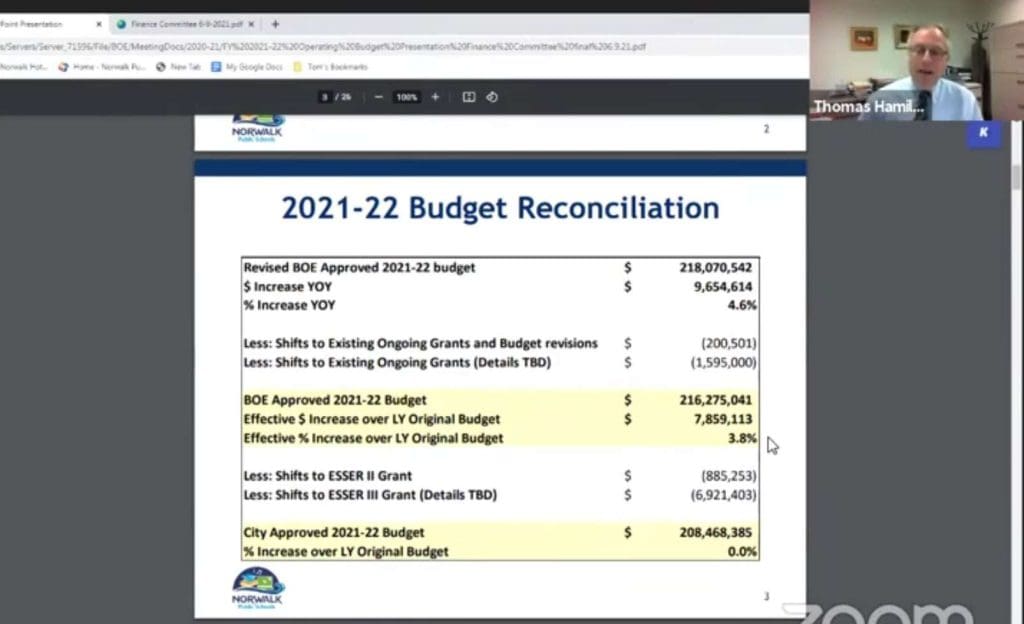 NORWALK, Conn. – The Norwalk Board of Education is poised to approve its coming operating budget, while still noting objections.

The 0% increase afforded by the City means potential sticker shock down the road, when the COVID-19 grant funding runs out and Norwalk taxpayers have to foot the entire bill, Norwalk Public Schools Chief Financial Officer Thomas Hamilton again warned Thursday. Moreover, it might come sooner than expected, “especially if we have significant expenses” due to COVID-19 prompting social distancing again in the coming months, he said.

The Board of Education is scheduled to vote on its final budget Tuesday. It factors in $6.9 million from the “ESSER III” grant, the American Rescue Plan funding, though

Hamilton and Budget Coordinator Kristen Karzcmit hadn’t yet assigned the funding to specific pots. They referred to this process as a “jigsaw puzzle,” as they carefully identify which expenses qualify for the grant funding.

Those “aren’t necessarily new or incremental positions,” Karzcmit said. “Some of them were new, and some of them were repurposed and reposted in order to fit into this category … lining up with the grant in the way they were supposed to do. I don’t want everyone to think we’re adding, you know, 15 or 17 positions. Some of these are a restructuring of current positions.”

ESSER II also provides $1.5 million for 10 attendance facilitators. “That is new, and that is to address the chronic absenteeism,” she said.

NPS expects to spend $1.9 million less on professional services than it did in 2020-21 and $1.2 million less on “other services.” The latter is due to creating Special Education services in-house.

“We’ve heard people suggest that the Board of Ed never, ever reduces any budget or reduces any line items in the budget,” Hamilton said. “…Obviously, there are in fact places where the board is as is reducing spending compared to prior years.”

Middle school sports funding remains where it’s been, although at one point in the process it was cut in half, Karzcmit said.

Magnet school per-pupil allocations were cut from $2.5 million to $1 million, to provide funding for literacy and math specialists district-wide.

“We felt that they presented, really, equity concerns because the schools that had achieved a magnet status and were getting that additional $1,000 per student really had, you know, more resources than schools that didn’t have that same designation,” Hamilton said. “And it wasn’t always clear that the full $1,000 per student was necessarily really needed in order to run that magnet program.”

A painstaking process of magnet schools applying for funds and being rated through a rubric ensued, and “no one received, you know, 100% of what they were looking for,” Hamilton said. “But I do think that the process was ultimately successful, that the schools were able to balance their budgets, they were able to continue all of these existing programs.”

Wolfpit Elementary is not getting funding to become an arts magnet at this time, as the Committee felt that was “premature,” he said. “we are working with Wolfpit to see if there are any grants that we can make available.”

While there’s been talk of an International Baccalaureate middle years program, that hasn’t been formally rolled out and is not receiving magnet funding, he said.

Overall, the magnet funding was halved, and “although we would have liked to give everybody more funding. The reality is it was cut in half,” Karzcmit said.

A grand total 72 math and literacy specialist were added.

As for the “cliff,” Hamilton said, “It won’t be anyone’s fault… it won’t be because of anything we’ve done wrong. It’s simply a mathematical fact that if we remove ongoing expenses that historically have been funded in the local operating budget and move them temporarily to a grant funded source, and that grant funding source goes away, then when we move them back, it will cause a larger than normal budget increase in the year that we have to move them back.”

Adding 72 new employees is certainly going to cause a cliff. If they are needed as extra help to “catch up” from Covid, shouldn’t they be temporary hires? This seems like an excuse to jack up the budget and then claim the “cliff”