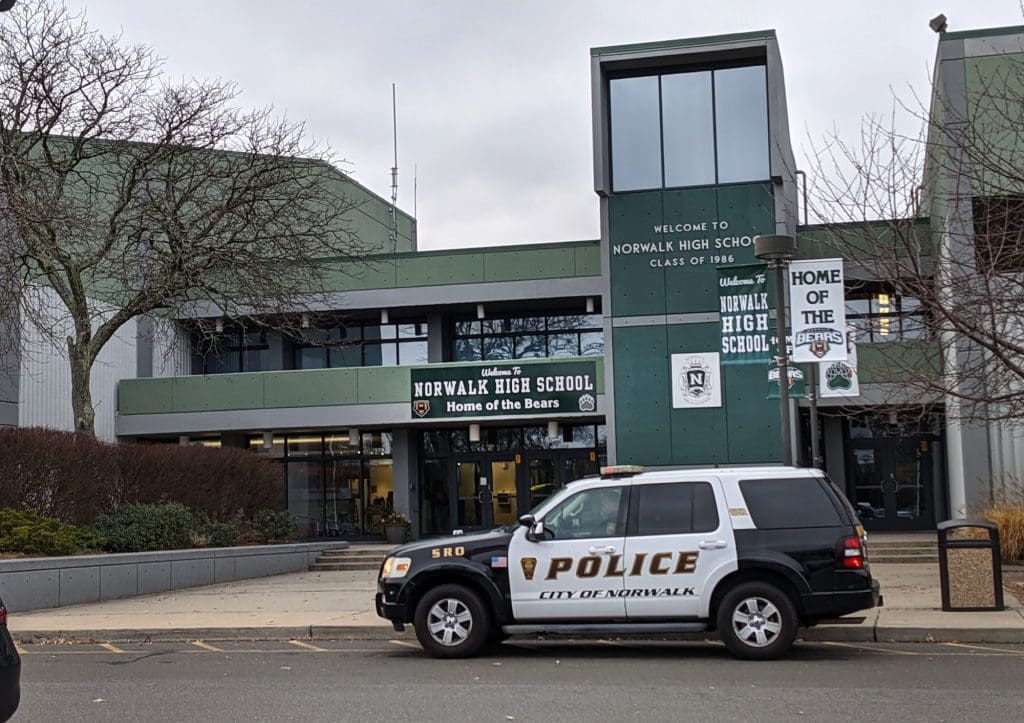 In just six or seven weeks, existing systems have been updated and tinkered with; as examples, he mentions building response teams, safety and security site coordinators at all of the schools and newly organized emergency “go bags.”

Harold’s first week was “scary,” he said, as he began work here just as Norwalk High School was targeted with hoax threats. A juvenile was eventually arrested; parents also said there were fights happening every day and complained that there are less School Resource Officers.

The NPS safety update came at the first Common Council Public Safety & General Government Committee meeting. Norwalk Superintendent of Schools Alexandra Estrella said there are additional safety agents at Norwalk High and NPS Assistant Superintendent of Business and Operations Sandra Faioes talked of a surveillance program, Lightspeed, that monitors students’ devices and searches for keywords indicating thoughts of self-harm or violence toward others and sends alerts to school staff.

Estrella said the recently created Safety and Security Task Force is working to update the district’s code of conduct and “looking at emergency response systems, which encompass lockdowns, particularly when there is a threat, either a bomb or any other kind of threat within our school system…. and just making sure that we have adequate evacuation processes.”

The Safety & Security Supervisor position had been held by former Newtown Police Capt. Joe Rios; asked about the change in December, NPS Chief of Staff and Communications Brenda Wilcox Williams didn’t say why or when he’d left.

Faioes said it had been a 10-month position, but Estrella had found the funding to make it a year-round job “because obviously safety is a year-round commitment to our staff and students.”

Harold had been Dean Of Students/Student Life Specialist for the New York City Department of Education since 2016.

“First thing we did around our emergency management was we centralized all of our reporting processes,” Harold said. “So previously, schools were keeping their own documents and their own recording. So through our Raptor application, we were able to set it up so that all schools report centrally.”

NPS has been using Raptor Visitor Management System in all of its schools since the 2017-18 school year, the NPS website states. It scans in every visitor but it’s been enhanced in the last few months, Faioes said during Thursday’s discussion.

The centralized reporting “gives us real time information about the drills that schools are having, when they’re having them,” allowing the administration to verify that State-mandated schedules are followed, Harold said.

“Another good system that we rolled out” is a discipline dashboard, tracking suspensions and incidents, Harold said. “Although it’s in its infancy, we’re able to break down, based on a bunch of demographical factors, to really identify trends and be proactive when we’re identifying some concerning areas.”

Harold said a protocol had been established “to not only acknowledge that we’ve seen the alerts, but we’re also tracking these alerts now.” The software can’t produce demographic reports because of privacy concerns but he’s keeping track “to stay ahead of situations before they get at hand.”

“Another process that we’ve put in place is our building response teams,” Harold said, explaining that schools not only have an incident command structure but also 10-12 specific staff members will have responsibilities and duties during emergencies.

Schools have been asked to appoint school safety and security site coordinators, an “an extra set of eyes outside of administration” focused on emergency preparedness who will learn through professional development and pass the information on to the school’s staff, he said.

“Norwalk High, that first week, was concerning, was scary, but at the same time, it really identified and highlighted some of the systems and the structures that need to be improved,” Harold said.

“Through working with the police department and the school administration, we were able to come up with a bunch of different simple fixes, or low hanging fruit I should say, to really make us more effective and keep people safer.”

NPS will be distributing “go bags” to the schools, with radios, master keys, floor plans and other documents to be given to first responders, Harold said.

“Communication is paramount between all parties, between the school first responders and the central office. And I feel strongly and we feel strongly that an updated communication system will really help us out in that sense,” Harold said.

NPS is looking into alarm systems to prevent people from entering or leaving schools without permission, he said. Cameras are being installed or upgraded.

“Ryan has been instrumental in leading us through,” Faioes said. Although the Norwalk Police Department is understaffed, “we were able to problem solve and have a lot officers take on additional shifts, and really just increase the collaboration at the Central Office level.”

Although the police department is authorized for 181 officers it was down to 166 sworn officers in November. As of Thursday, Police Chief Thomas Kulhawik said it down “17 or 18” positions, “plus people that are out on long term disability.”

There have been as many as eight or nine school resource officers in the district but it’s down to three now, Kulhawik said.
Parents are concerned about that, Council member Tom Keegan (R-District D) said, also asking about the DARE (Drug Abuse Resistance Education) program the SROs shepherd.

NPS has found “creative ways” to continue DARE at all the elementary schools, Faoies said.

Kulhawik said he and Mayor Harry Rilling had increased the number of school resources officers, adding two. But, “Unfortunately, we’ve had no choice but to make some very difficult decisions. I don’t want to make those decisions, it was very hard for me to return some of those SROs back to patrol.”

“Our principals have been phenomenal at bringing in or bringing out additional personnel to support with the drop off and pick up,” Estrella said. “But I have to say that NPD has been also phenomenal even though we might have a limited number of SROs. They constantly deploy other officers during pickup and drop off time to help with traffic control.”

The conversation also touched on the students social and emotional wellbeing. NPS is looking at the “disproportionate number of black and brown children” who are suspended, seeking to identify patterns and trends, Estrella said.

Although NPS has a discipline dashboard, it’s “really is about student support, students that are going through crisis and how we could get them back on track as fast as possible,” Harold said.
Principals are being trained in tracking adult behavior patterns that might be leading to unwanted student outcomes, Estrella said. “We are looking at creating these dashboards to be able to look at the data, to look at how the data is shifting as a result of the supports that we’re implementing in the system at large.”

Interesting. NPS fires a well respected CT school safety professional in Joe Rios (formerly of Newtown PS) and hires another former NYC school person (as if that’s supposed to impress us). Who knew the innovation in school safety is a Go Bag?

Norwalk High had a school safety committee chaired by Jeff Smith in the mid-2000’s where many of these items were proposed. I was on that committee when we tried to get the district to approve “go bags” to for the school with radios, master keys, floor plans etc that would be available to police and also one for the school staff to take from the school along with a laptop with remote access to student info and attendance records to account for everyone if the school had to be evacuated to a safe place in an emergency. We also discussed linking the security camera system into NPD headquarters so they could have live feed into areas of the school to communicate activity to responding officers, painting large numbers on outside doors so responding officers would have an easier time identifying points of reference, and investing in a simple device that was easily installed that would make it impossible to gain entry to a classroom from the outside. I guess these items have still not been addressed.

Everything mentioned as being recently implemented by this new guy is in fact something that was put into place long ago, by others. Who’s kidding who?

It’s funny and sad how we have to recreate solutions. MMurray lays out some detailed history of a prior approach. Unless the type of threat has changed, why not dust off the prior work?