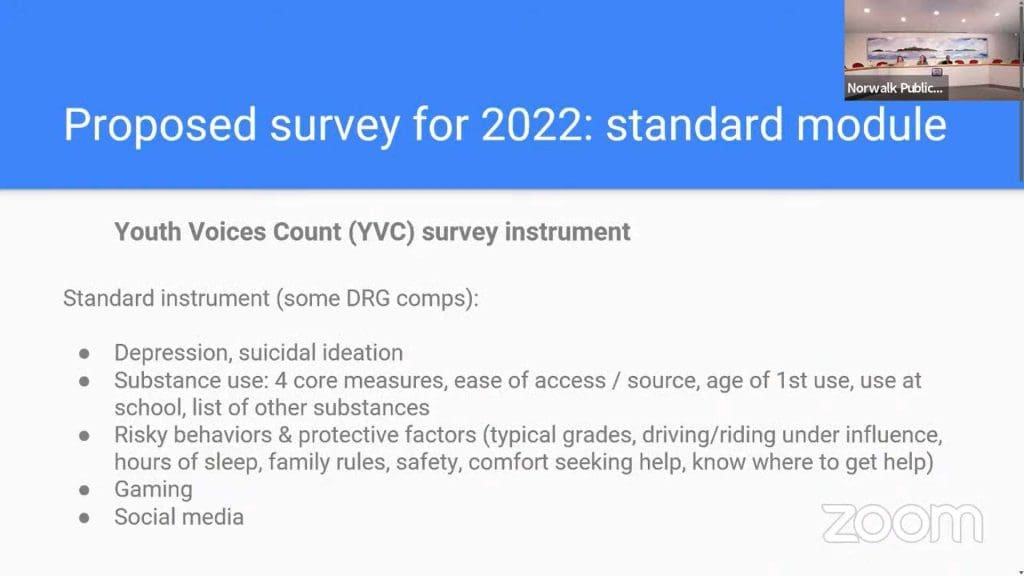 A screengrab from Tuesday’s Norwalk Board of Education meeting.

“We really use the information that we acquired from the previous survey, and would really love to learn now that we are on the other side, hopefully, of the pandemic and some of the things that we need to continue to pay close attention to so that we can effectively support our students,” Norwalk Superintendent of Schools Alexandra Estrella said Tuesday.

Previous survey results have helped the City look at youth needs and prioritize funding, “and just having a well rounded view of what the youth is experiencing in our school systems,” Human Services Director AnaVivian Estrella said.

It led to initiatives such as hiring more counselors for the schools, said Margaret Watt, Prevention Director at Positive Directions. “Having this kind of data serves so many different purposes, one of which is that it brings in grants.”

The timing would get the school district back to a every other year schedule and show if mental health is improving or if substance abuse is getting worse, Watt said, explaining, “Anecdotally, the kids are talking about vaping and bathrooms and school buses and things like that, you know, we want to see what’s changing and what we can do about it.”

A Connecticut-based consulting agency, B. Weyland Smith,  would implement its Youth Voices Count (YVC) survey tool, Watt said, calling it a “bonus” that this will allow Norwalk to compare its results with more state communities.

The survey typically takes students about 15 minutes to complete and there are supplemental questions that might add two or three minutes, she said. “It’s actually shorter than the last survey.”

Norwalk Partnership wants to ask the kids how connected they feel to others, because that was asked during COVID and a comparison is sought. Research shows students do better if they have a couple of trusted adults in their life, so that will be asked too.

Additional possible modules include asking students about their top six levels of stress; high schoolers might be asked about sexual behaviors. The latter question wasn’t asked in 2021 because they were “pretty much at home,” Watt said.

“We want to add a question about disordered eating, because anecdotally, therapists are telling us that that’s really been increasing since COVID… And this survey doesn’t ask about suicide attempts, it asks about ideation. And last, the last two times, we’ve asked about attempts, so we do want to bring that back and see how that has changed,” she said.

The last survey, completed in June 2021, revealed that 13% of students had had suicidal ideation in the last year, and 7% of them had made an attempt.

“The kids who identified as being in any, really almost any, of the marginalized or sort of historically discriminated against populations were at much, much higher risk of mental health disorders and suicidal ideation,” Watt said. 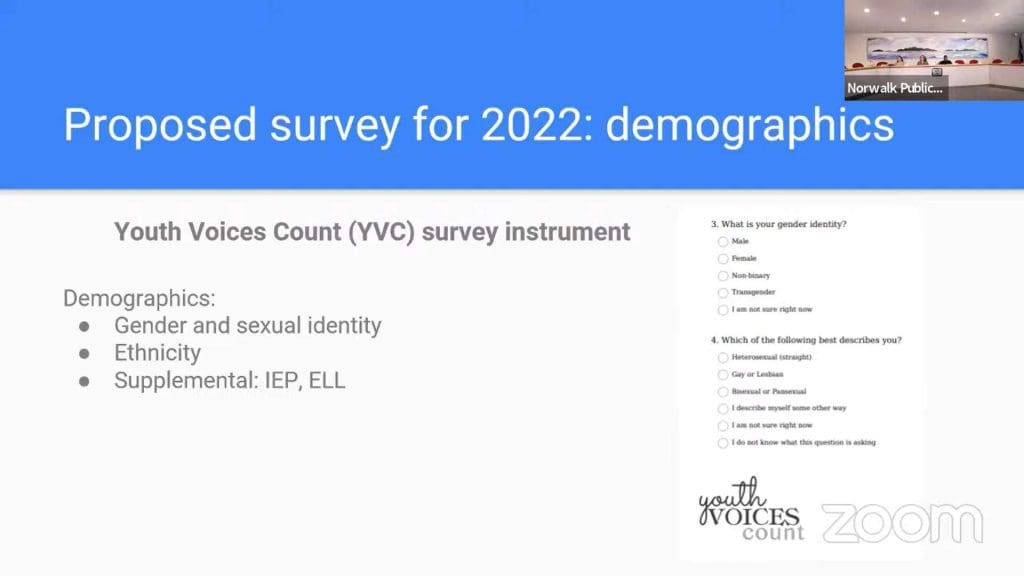 A screengrab from Tuesday’s Norwalk Board of Education meeting.

Students could skip questions and answers will be anonymous, Norwalk Board of Education Chairman Colin Hosten said.

Cadence Pentheny, a community educator at the Triangle Community Center, noted that “there was concern last year specifically about the questions related to gender and sexuality. Our students are going to be struggling, whether we ask them about it or not. So not asking them about it is like pretending it’s not happening. And that is not helpful to anyone.”

“Not getting the data does not mean the behaviors aren’t happening,” Hosten said.

Students don’t have to answer the demographic questions but they want to, Pentheny said.

“As a community educator, I have worked with many, many different schools and youth focused organizations, all over Fairfield County, and I bring up the Norwalk Partnerships data every single time,” Petheny said. “It’s so important that we have local data, it gets people’s attention and allows us to compare it to national data. And I will tell you, not everyone in the area has this kind of data to point back to so it’s really special that we have it here in Norwalk.”