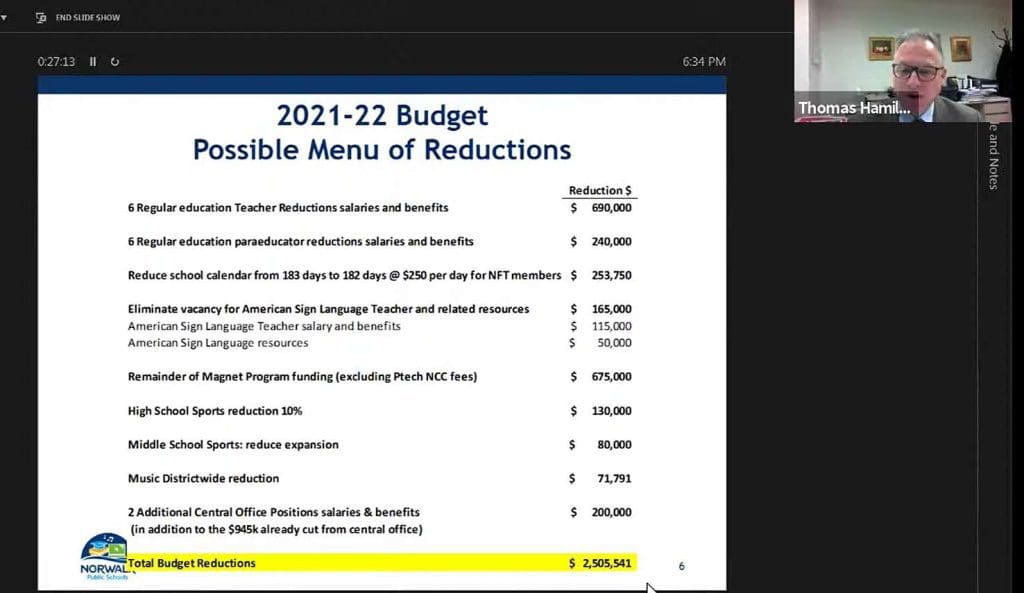 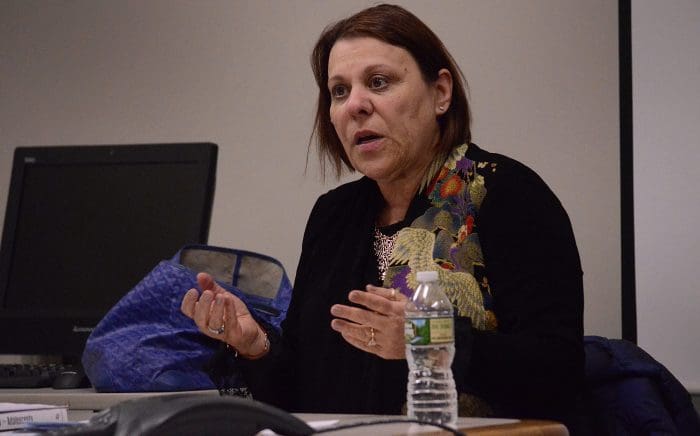 NPS Chief Financial Officer Thomas Hamilton, without once mentioning the federal American Rescue Plan passed by Congress earlier in the day, laid out for Board of Education members a potential $2.5 million in budget cuts that could happen in response to the Common Council’s budget cap. Those include eliminating six teacher positions and six paraprofessionals, as well as a 10% reduction in high school sports and hits to the middle school sports program and music classes.

Hamilton said Gov. Ned Lamont’s plan to delay the increases to the Educational Cost Sharing formula is “quite concerning,” and stressed a fear of a financial “cliff” in two years when the federal stimulus funds stemming from last year’s CARES Act run out. NPS needs to be careful to not create “just a horrendous crisis two years from now,” he said.

Those plans are independent of any need to cut the budget, although they do represent a reduction in the Board’s request, Estrella explained at the Board of Education Finance Committee meeting.

“Early on, when we knew that we needed to kind of rethink how we were supporting students given the learning loss that we knew took place that as a result of the pandemic, we wanted to make sure that we strengthen the areas in curriculum and instruction that needed to have additional supports,” Estrella said.

Estrella mentioned the effort to create a new strategic operating plan, to “create better systems that will target our focus around the areas of concern, one as a result of the pandemic, but also as a result of what we’ve learned from the different studies that we’ve conducted within the past few months.”

Though this is a $945,000 reduction, the decisions were made not “with the primary intent of just saving money,” Board of Education Chairman Colin Hosten said. “They were meant mainly for the intent of increasing efficiencies in the way that we deliver instruction.”

The Council’s budget cap would, if City budgets remain where there were when it was voted on, provide room for a 1% Norwalk Public Schools budget increase. Hamilton presented cuts based on a 2% increase, saying that the Board of Estimate and Taxation is working to scrub budgets.

Mayor Harry Rilling said last week that he’d asked all City department heads to cut an additional .5% from their budgets. NPS will begin working with the BET on Tuesday, Hamilton said. That will be followed with a public hearing on the operating budget, although he wasn’t sure when that will be held.

Hamilton stressed that the Elementary and Secondary School Emergency Relief Fund (ESSER Fund) grants authorized through last year’s CARES Act can only be used for certain things. They cannot, for instance, pay for a heating bill, he said.

“What that leaves us then is a balance of about $2.5 million to cut from elsewhere within the budget, in order to meet this cut of about $5.5 million, which would represent the cut that we need to make in order to get down to a 2% budget increase,” he said.

NPS could cut one day off its calendar and save $253,750, Hamilton said, explaining that NPS has more calendar days than legally required and that the day had been added a couple of years ago to increase instructional hours for students.

It will be easy to cut the American Sign Language position created last year.

NPS could also cut two additional Central Office positions, over and above the slashing of the Specialized Learning and Talent chiefs, to save another $200,000, he said.

So those, in addition to the six teachers, the six paraprofessionals and the music and sports program cuts would reduce the budget by $2.5 million, Hamilton said.

While it’s too early to begin recommending cuts, “we did want to kind of start to get this information out there so that people can start to think about it,” Hamilton said.

President Joe Biden is expected to sign the $1.9 trillion American Rescue Plan on Friday. The Connecticut Post reports it will send $77 million to Norwalk’s budget, of which $38 will go to the schools. While the Platte Institute reports that the rescue plan allows greater flexibility in how these funds may be used than in last year’s original CARES Act, it does contains some restrictions.

ESSER II has provided $9.2 million to NPS, but getting the expenses authorized by the State is a cumbersome process, Hamilton reported. Some funding submissions have been denied, as the State declared them ineligible under ESSER, he said.

NPS needs to be mindful of the future, Hamilton said.

He said, “We just believe it’s prudent to anticipate that some amount of this ESSER II money will be needed for what I would term sort of unbudgeted continuing COVID expenses next year. We don’t really know how much that is. But we think that that is certainly a possibility.”

ESSER II can fund efforts to “deal with the social emotional fallout, if you will, from COVID, and making sure students are ready to learn and their families are in a place where they can support their students to learn,” Hamilton said.

Lamont has proposed suspending the ECS funding increases authorized by the legislature, freezing the funding at its current level. Stalling the increases in the ECS grants will help Lamont close the state’s deficit, which tops $2 billion over the next two fiscal years. He is instead relying on the ESSER money for school districts to meet their needs.

“It’s really reneging on what had been a commitment from the state government, to school districts to phase in increases to the ECS funding formula,” Hamilton said Wednesday.

NPS would get $1.2 million less in ECS over two years than was planned. This contrasts with the $9.2 million from ESSER.

“Although we are grateful for the additional one-time Federal funding under ESSER II, it is critical that the use of the ESSER funding remain focused on emergency relief from the impact of Covid, as it is intended,” NPS Communications Director Brenda Wilcox Williams said recently in an email to NancyOnNorwalk.

If NPS uses ESSER funds for math and literacy specialists, “this is going to be a big budget problem two years from now, because it will mean that when that grant goes away, and is no longer available to fund those positions, those positions will all need to transfer to the local budget,” Hamilton said.

“It’s going to cause a big budget problem two years from now,” Hamilton said. “So, we want that on the record, that, you know, we’ve made this point and made it loud and clear so that people don’t suggest that… there was some malfeasance two years from now when we say we need, you know, millions of dollars more money to continue our existing programs and services.”

“Ideally, these funds should really be used for extraordinary, almost one-time type expenses to catch students up to address, you know, learning loss, and to, you know, deal with other impacts and expenses directly related to COVID,” Hamilton said.

“I think there is perhaps some kind of perception that some of these expenses that may be exacerbated by COVID will go away once COVID goes away,” Hosten said. “And I think it’s important for people to understand that some of these expenses that are exacerbated by COVID, are actually things that we need to have in our budget anyway.”

Estrella also said NPS is realigning its Title I funding, to “any school that has a based on the title one criteria, 35% or more of students that receive free and reduced lunch.”

“This will allow schools to have additional resources to address the needs of students,” and lead to “a more equitable approach and how we are disseminating resources across the district,” she said.

Hosten commented, “We do know that there are so many moving pieces to this budget puzzle and appreciate one the work that that our team are doing here to bring it all together and make sure that we do not lose the resources for our learning communities. But also to just keep in mind for the general public that a lot of these grounds are still shifting pending so many decisions to come.”

Programs that taxpayers kids want are being cut, and programs that benefits non-taxpayers are kept. That is a problem…

Keep the programs and eliminate all of the new staffing at Central Office. Or let’s just not fund the new nhs right now and then the district has the extra money.

Im confused as to what the person in the comments considers “non-tax payers”. Im not going to say what I think is behind it. However, it is sad that we have to cut sports and music, but ALL children have the right to learn and have at least a basic education. That’s not a “benefit”. Its a RIGHT!The children are innocent. Why ill-equip the children, who are our future, then when they cant get good jobs and can’t pay taxes, people (like in the comments), will say their children don’t deserve the “benefit” of basic education because tax payers’ children should have sports… that’s the vicious cycle of poverty right there. “Keep them poor because we’re privileged enough to have the education that got us jobs to allow us to pay taxes.” Everything that’s wrong with America right now.

All it takes is one case of dishonesty, whether an outright lie or a half-truth, and the credibility of the board and/or the superintendent comes into serious question. I have stated before that the BOE is being deceitful in saying that the Specialized Learning and Talent Chief positions are among the cuts because this is only a partial truth, which makes it an untruth. The Talent Chief position has been cut, but the superintendent had the BOE appoint a person to Director, rather than Chief. The Director position didn’t exist before, and it doesn’t pay much less than the previous Chief Talent Officer was paid. Anyone willing to look through public documents, including BOE meeting minutes, can find the truth. I don’t know how the BOE will handle Specialized Learning leadership after June 30, but keep an eye on the number of administrators in that department, too.

The other example of deceitfulness is in references to Central Office personnel cuts. Anyone who goes to the 3rd floor knows that there are more people there than ever before, and at least 8 of them were appointed to very highly paid administrative positions since late in 2020.

As the NON article above states, the proposals for cuts conveniently fail to mention that NPS will be receiving $38 million in federal funds (by the way, also our tax money). So the Board doesn’t want to pay for math and literacy specialists with this money because of the budget two years hence? Too bad. You have this enormous windfall and it should be used to help NPS students catch up academically. That is a major reason for the funds, so that is how they should be used.

Make all elementary and middle schools Title I schools? Title I was once divided among 6 of the 12 elementary schools, and within the past several years, two of the middle schools were given a share of the funding. Unless there is a major increase in Title I for next year, does this mean that the neediest schools will be receiving less of this supplemental funding?

Dr. Estrella, the BOE makes the decisions, but they rely upon your guidance. Please demonstrate that this guidance reflects excellent judgment on your part. And, by the way, cutting teacher and paraeducator positions doesn’t look like excellent judgment to me.