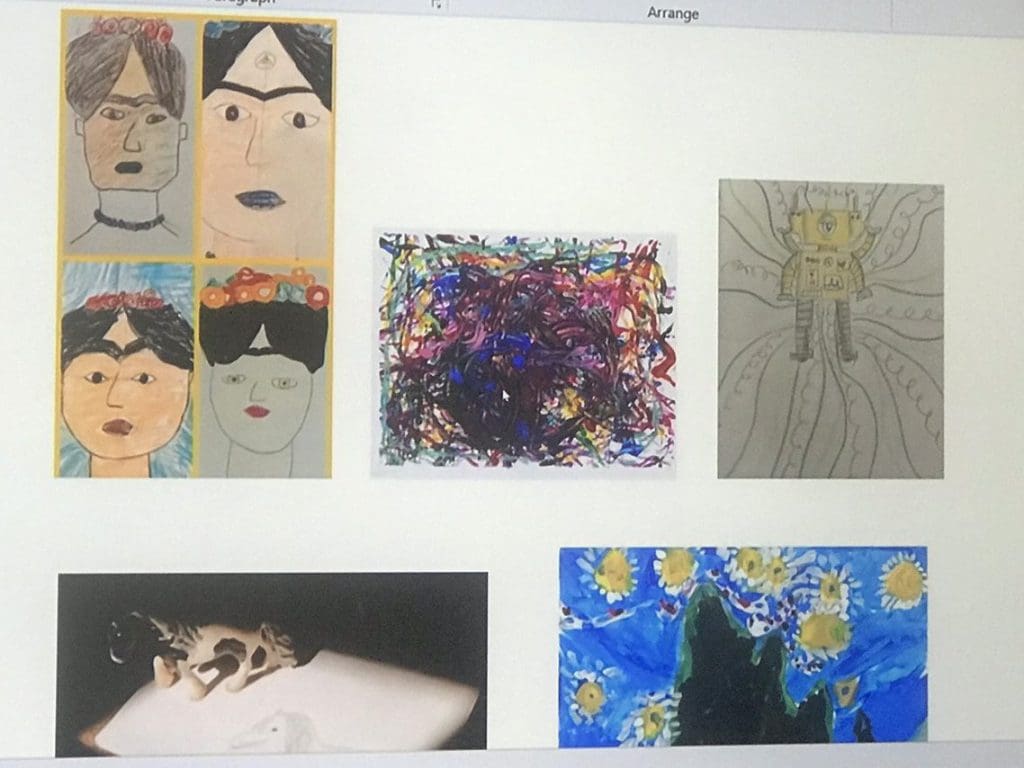 Art projects done by Norwalk Public Schools students while distance learning are shown in the YouTube video of the Board of Education Curriculum Committee meeting Tuesday.

“There will be gaps in learning from our children. And we need to have a comprehensive plan upon reentry in the fall,” said Myers, Norwalk Public Schools Chief Academic Officer, in delivering an update to Board of Education members last week. Also, she’s heard that Connecticut and 14 other states in the country expect that high school grades will be issued on a pass/fail system this year.

School buildings are closed until at least May 20, and while BoE members lauded the work NPS has done in throwing together learning packets and the like on very short notice, there are, of course, many bumps in the road.

“A lot of the work and the voice that our children are giving right now are less about the learning and more about their needs, their social and emotional learning needs to support the trauma they’re facing,” Myers said. “Our teachers will tell you… they must spend time unpacking human needs of our children. And this is the number one crisis.”

At the end of three weeks of distance learning, there’s a 93 percent average of participation and attendance among high school students, 95 percent at the middle school level and 97 percent for elementary school kids, Myers said.

The structure that Myers and her team provided has been well-received, she said. There’s a learning block from 8 a.m. to noon, followed by lunch. Learning ends at 3 p.m.

A bonus: “Our high school students are getting additional learning and additional sleep time, because they don’t have to get on the bus,” Myers said.

“We’ve done a prioritized curriculum model which says, ‘what are the most critical skills and knowledge that our children need?’” she said. “We cannot teach everything in this environment.”

In the fall, NPS will need to “give additional support and tutoring to help close those gaps that are going to happen in this environment, both because it’s highly charged and emotional, and both because there are limitations on what you can learn in distance learning,” Myers said.

Of concern is the “key developmental time when children learn to read,” she said. “Your brain is only six years old once in a lifetime. And there are moments where reading becomes crystallized for children, and we’ve got to move children through text. It’s the most important work we have to do during this crisis.”

NPS has handed out 8,300 Chromebooks to students in grades four through 12, NPS Chief of Digital Learning and Development Ralph Valenzisi said. Hotspots have been distributed to high school students and Altice/Optimum provided a 1-800 number for parents to call and get free WiFi access for “a period of time,” but “I think they had some problems at corporate to try and make that really work well.”

To solve that problem, NPS gave Altice/Optimum the MAC address for every Chromebook, which were then automatically connected to public WiFi.

“Is it 100% perfect? No, but I mean, any internet isn’t,” Valenzisi said, explaining that if parents have problems, NPS swaps out the Chromebook, a tactic that seems to be working.

The Chromebooks were purchased with Norwalk Rainy Day Fund money. The devices were given to fourth and fifth graders in the third week, Myers said.  NPS is working to get devices to kindergartners to third graders “so that they can do some online reading.”

“We’ve been facing the issues of evaluation and grading. And we’re ensuring that children get credit for participation, that there’s an equitable use of evaluation, and that children do not get evaluated without opportunities for feedback and revision,” Myers said. “That’s a very different environment to be evaluating our kids right now.”

Elementary school parents have been complaining that they don’t know how to do certain things, like teach math, Board member Barbara Meyer-Mitchell said. “They feel out of their depth.”

“When we first started, we had learning packets for children,” Myers said, explaining that kindergarten through third grade teachers get the packet a week early so they can customize it for children, and emails with video links are sent to families.

“The other thing we’re trying to move towards is the ability to do what we call synchronistic learning,” Myers said. “…we’re moving into where teachers are doing more one-to-one conferencing with children, listening to them read, maybe doing a math problem with them, maybe having a couple of kids come together.”

Meyer-Mitchell also said the feedback from fourth and fifth grade teachers was that “they got a lot handed to them very quickly with very little planning time.”

“We knew it was going to be a huge lift for fourth and fifth grade in Google Classroom at the same time. But we had one moment for deployment before we were shutting down our schools. And if we were going to get Chromebooks out, we have a very small window to do that,” Myers said.

“We would definitely generally admit that fifth grade was more ready for this,” she said.

On another topic, “We keep wrestling with this idea of materials and making sure that students have the right materials to continuously engage with the learning,” Director of K-12 STEM Education Tina Henckel said.

While engineering and robotics students aren’t going to be given circuit boards to do the work at home, NPS “modified our curriculum so students can actually interact and engage in engineering and robotics in the virtual environment without the physical robots in front of them,” Henckel said. “…The National Science Teachers Association has been creating virtual learning experiences through video and through hands-on activities with live simulation.”

Board member Godfrey Azima commented that “the intentionality around where we’re going” is “absolutely amazing,” later calling the work “tremendous” and saying that he’s proud to be involved.

“I’m really proud to say that Norwalk has been using 100 percent of its resources for 100 percent of the kids. And I don’t think many districts can say that. I say that humbly. And it makes me teary to think about it,” Jennifer Katona, NPS Visual and Performing Arts Senior Manager, said.

NancyOnNorwalk has talked with a Massachusetts woman who was provided no instructional materials to use with her two children and is winging it. A speech therapist in Central New Jersey said “only five” students are attending and there’s “no equity” due to lack of electronic devices and internet connections.

Meyer-Mitchell told the staff members that she has friends in every state, many of them teachers, “and they say that what we’re doing is far and away the best thing they’ve heard nationally, so you should be very proud of the work you’re doing.”

My granddaughter is in 5th grade at Marvin. I’m impressed with the online education her teachers have managed to assemble, including gym, art, and music. I really appreciate all the effort this has taken to put quality work together in such a short time. I’m hoping that there will be a lot of reinforcements in place when my granddaughter begins 6th grade. That’s my only concern.

NPS did a terrific job the first few weeks but we need to continue to step up our game for the elementary students or there is going to be a huge learning gap when the kids return. I am teaching my 2nd grade daughter from 9-1 or 2. We have only had 3 short Zoom conferences from the teacher and a few short online videos over a span of 4 weeks. When is the teaching happening from the teachers? Giving us a packet and telling the parents to teach their kids is not enough. I am not working so I am able to teach but what happens to kids whose parents are working online during the day? What happens to kids whose parents are essential workers? What happens to the kids with parents who can’t speak or read English? What happens to parents with more than one child? The teachers need to virtually teach more classes and take more responsibility for teaching. If my child’s class is the only instance of this, then we need to make sure there is consistency across all elementary classes. Perhaps we need a parent survey so the schools and BOE can really dive into how we can improve.

@Teachingparent- It is easy to forget that many public school teachers are parents as well and are likely just as burdened as the rest of us. I’m happy with the school system’s response so far but agree that the current solutions that are in place are not sustainable in the long term, especially for parents with kids 3rd grade and under.

Those of us with elementary schoolers 3rd grade and under are doing a lot of work. I’m frustrated as well and don’t know what the answer is. Maybe it should be a consideration to allow the youngest students who are unable to do online study back to school first, once it is deemed safe. I’m sure there are several layers of complexity to these decisions.