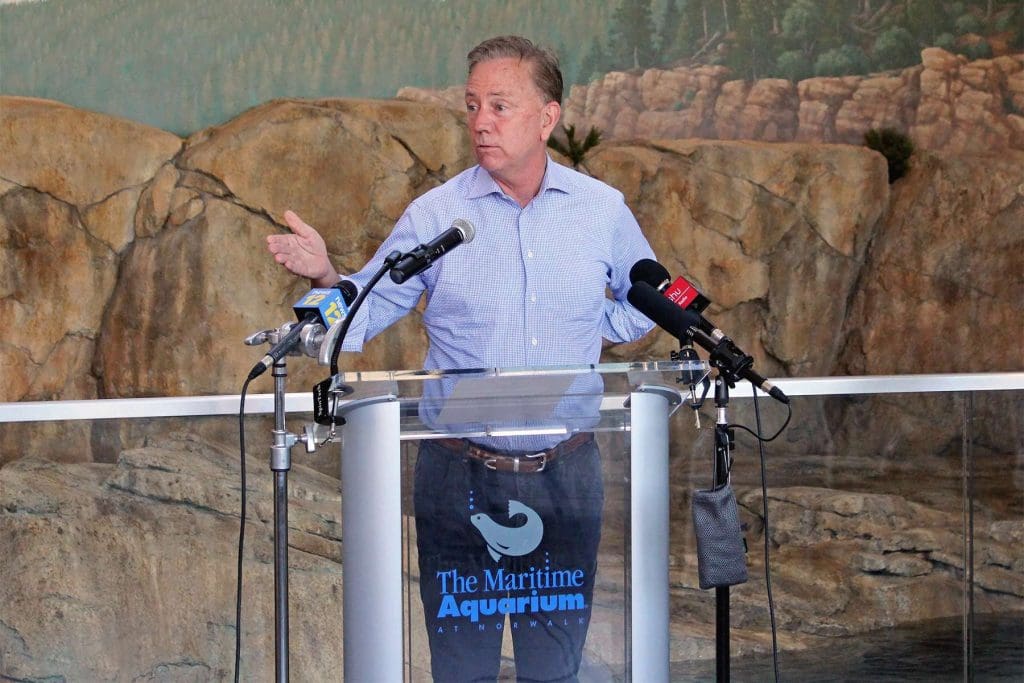 Gov. Ned Lamont speaks Friday at The Maritime Aquarium at Norwalk to recognize a joint program that will incorporate the Aquarium’s educational resources into summer school for 730 K-3 Norwalk students. (Maritime Aquarium)

NORWALK, Conn. — Norwalk Public Schools and the Board of Education has good news to share: 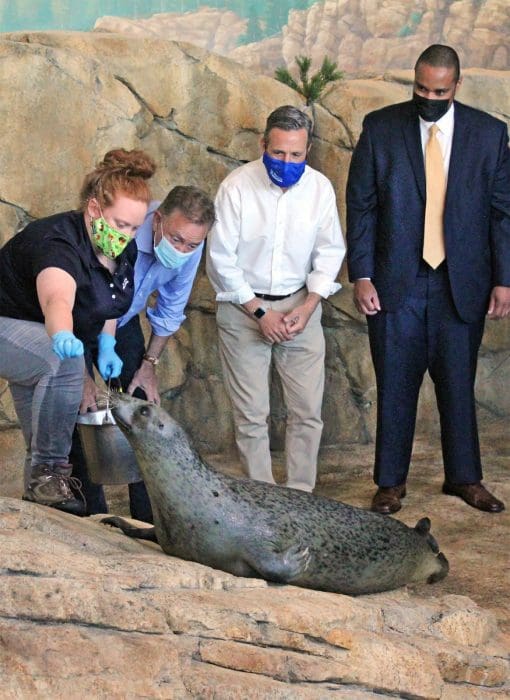 Norwalk’s youngest summer school students can get their learning via Maritime Aquarium visits and interactions in a new program that Norwalk Superintendent of Schools Alexandra Estrella said started with a tour of the facility and worked its way to a vision of “learning fundamental skills and practicing in school” but then going to the aquarium and applying their knowledge.

Estrella touted this at Tuesday’s Board of Education meeting; on Friday, Gov. Ned Lamont came to Norwalk to highlight it himself, along with a cadre of elected officials.

More than 700 NPS K-3 students will engage in activities including live interactions with turtle habitats, , helping to feed sting rays and a “Shark Safari” program in the five-week summer school at no cost to their families, an Aquarium news release said. “The programs will occur at – and busing will be provided to –– Brookside Elementary School, Cranbury Elementary School, Kendall College & Career Academy, Jefferson Elementary School, Marvin Elementary School and Tracey Magnet School.”

COVID-19 recovery funds are being used by the State to “support expanded and innovative educational opportunities this summer, especially to students from traditionally underserved communities,” and a $244,180 grant funds the Aquarium’s participation, the release said. The school district is contributing “$1.2 million toward personnel costs, elementary school facilities, transportation, classroom space, supplies and teacher training.”

“We will be getting students to the aquarium on a weekly basis,” Tom Naiman, director of Education for The Maritime Aquarium, said Tuesday to the BoE. “Third graders will be getting out on our vessel, we’ll be doing coastal exploration programs with them at Calf Pasture Beach. They’ll be seeing films in our theater and doing activities in our classrooms. And all of this will ideally give them a summer to remember but also a summer in which the things that they do with us will motivate their gains in language and math as well.”

The hands-on, inquiry-based approach will begin June 28 with the families invited to the aquarium at no cost, said Amaris Melendez, NPS Director of Early Childhood. Five weeks later, they can come back and talk about what they’ve learned.

“Live-animal programs, aligned to Next Generation Science standards, will be led by Aquarium educators and serve as phenomena motivating daily classes in math, literacy and arts led in the classroom by NPS teachers,” the news release said. “Every student will participate in four visits to the Aquarium, one field trip to a coastal site, six hands-on education programs led by Aquarium educators, and, for third-grade students, an expedition onto Long Island Sound aboard the Aquarium’s research vessel.”

The summer school is one of 235 programs statewide receiving grants from the State’s COVID-19 funds stemming from the American Rescue Plan, the news release said. More than 96,000 students will benefit from expanded educational experiences this summer via the grant funding.

“Over the course of the pandemic, so many children missed out on classroom experiences that are essential to their development,” Lamont is quoted as saying. “We targeted a significant portion of our COVID-relief dollars to expand educational opportunities so that young people have more of an opportunity this summer to explore new, enriching experiences that reignite their creative energy.”

Back on track for graduation

Some months back, NPS created a program to reach students who weren’t participating in remote learning.

Twilight is an in-person program.

“Many reported family obligations such as having a work or childcare that prevented them from coming to regular scheduled day classes. Twilight was created in hopes to engage the students back in to engage the students back in their education to get them back on track,” Assistant Superintendent of Business and Operations Sandra Faioes said. “…If our students did not have this opportunity to attend Twilight, they either said they would have not have graduated, dropped out and continue to work or whatever else they might have thought if they didn’t have the support of the staff that we were working with.”

The 22 students who are graduating collectively had a .63 grade point average in quarantine and three of them had a zero, Fernandez said.

In addition to them, there are “10 students that are back on track to graduate with their class or at least moving closer and closer to that goal of a high school diploma,” he said. “To provide some figures for those students, during quarter two, those students had a collective average GPA of point .31 and a quarter three average of 1.4375. There is approximately a 300% increase in their average GPA there.”

One student who was completely disengaged “showed a great deal of promise in in video production. And as a result, one of our amazing teachers, recognizing that, was able to secure an internship for the student for the summer,” Fernandez said. “This is an opportunity that wouldn’t have come about had had the student not participated in Twilight.”

The strategic operating plan effort now has the voice of students worked into the mix.

A “pretty spectacular” group of students were informed that a vision statement is “supposed to be captivating. It’s supposed to express the future you’re trying to create, as you’re doing your work,” consultant Richard Lemons said. “…They tend to be pithy or shorter, more concise, than a mission statement, be more like a bumper sticker, if you will.”

The students drafted this:

“Building a more equitable and just world where each and every Norwalk student is prepared for all aspects of life.”

“I think I can speak somewhat on their behalf by saying that equity was very important for them,” he said. “Multiple iterations we worked on and every step along the way yesterday, they all stood up and said the vision statement has to embrace equity.”

“I’m so impressed that the vision statement of the students includes the world, that they’re building a world. I think that’s really, really amazing. And it just fills me with glee for how amazing our students are,” Board member Sarah LeMieux said.

“We have all agreed as a Board and as the fuller Strategic Planning Committee that student voices are integral to this process. And I think this is a fantastic start,” Board of Education Chairman Colin Hosten said.

“It was an amazing day. To the very end it was a 0-0 score and they got one run and they took the trophy home,” Estrella said.

The way “our student athletes persevered through the challenges this year is tremendous and remarkable,” coach Ryan Mitchell said, noting that they were one game over .500 during the regular season and the run at the end “speaks to our kids’ toughness and determination and commitment to making our high school baseball, the very best program in the state.”

“This is a remarkable accomplishment,” Mayor Harry Rilling said. “Especially, I believe, they were rated the 24th of the state… and they just really put it all together at the end when it really counted.”

Yes, there will be a parade, he said.

The Traffic Authority agenda for Monday indicates that the parade will be at 9 a.m. Saturday, June 26.

Way to go NHS baseball. This is a culmination of a great career for this group. They won the Babe Ruth World series under Jim Benincaso and the state championship under Ryan Mitchell. Nice “W” for Norwalk, NHS,the kids, and their families. Congrats!!