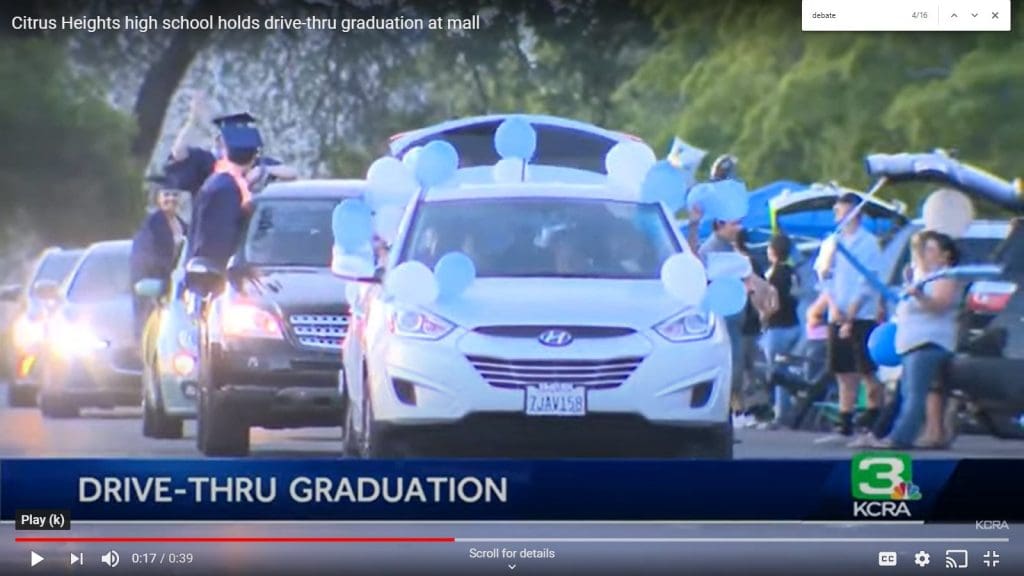 A drive through graduation in Sacremento, Calif., as shown in a screengrab of a YouTube video.

NORWALK, Conn. — Norwalk’s high school seniors will mark their graduation this year with drive-in ceremonies, in late July and early August. Most will graduate at Calf Pasture Beach.

“Our high school administrators spent a great deal of time several weeks ago talking to seniors polling seniors, getting their views on the kind of graduation that they wanted, and discussing options with them,” Norwalk Superintendent of Schools Steven Adamowski said at Tuesday’s Board of Education meeting. “There was very little support for a virtual graduation, which many districts throughout our state and country are doing.”

The virtual graduation would have been on the expected graduation date, he said. Or, they could have chosen to come back in the fall for a graduation ceremony. That wasn’t well-received either.

“There was some very astute thinking of part of our students,” who said that if the other door had opened and they were already in college, the closure aspect of a graduation experience would be counteracted, according to Adamowski.

“They wanted, even if it was on a limited basis, to be able to see their fellow graduates and participate in a some type of ceremony with them,” Adamowski said. “So we are going to use the drive in a style graduation, which means that families will attend in cars, the graduates will get out of the car to come up and get their diploma. There will be speakers – obviously, the speaker will be on the stage pretty much by themselves. But all the things that would normally occur in a graduation will occur at an appropriate distance with both families and students in in their cars.”

Norwalk Public Schools is working with a company that does drive-in graduations, he said. The schedule is:

By order of Mayor Harry Rilling, “who has been extremely cooperative in this matter,” the beach will be closed from 8 to 11 a.m., Adamowski said. “That will allow an hour to get in in our ceremony and an hour to get the cars out.”

The Connecticut Department of Education has sanctioned this style of graduation, provided it’s done after July 1, so “we feel pretty safe doing this,” Adamowski said.

Board of Education Chairwoman Sarah LeMieux asked if NPS is making provisions for families that don’t have cars.

“That’s one of the areas that we’re working on,” Adamowski said.

“I think it’s fantastic. I think our seniors will be very, very happy,” Board member Heidi Keyes said.

Board member Erica DePalma asked if parents who are separated will be able to arrive in two cars.

“That’s a very good question and thank you for thinking of that. We’ll add that to our list of problems,” Adamowski replied.

Adamowski thanked Norwalk Police Chief Thomas Kulhawik, Norwalk Director of Health Deanna D’Amore and Rilling, for the “unprecedented step of closing the park, closing the beach on those two mornings for our graduation.”

“I think that the amount of thought and planning that has gone into this is going to hopefully provide our students with an experience that would be far better than any other option,” Adamowski said. “And also one that under the circumstances will create a better closure to the school year and launch them into their next into their next chapter.”