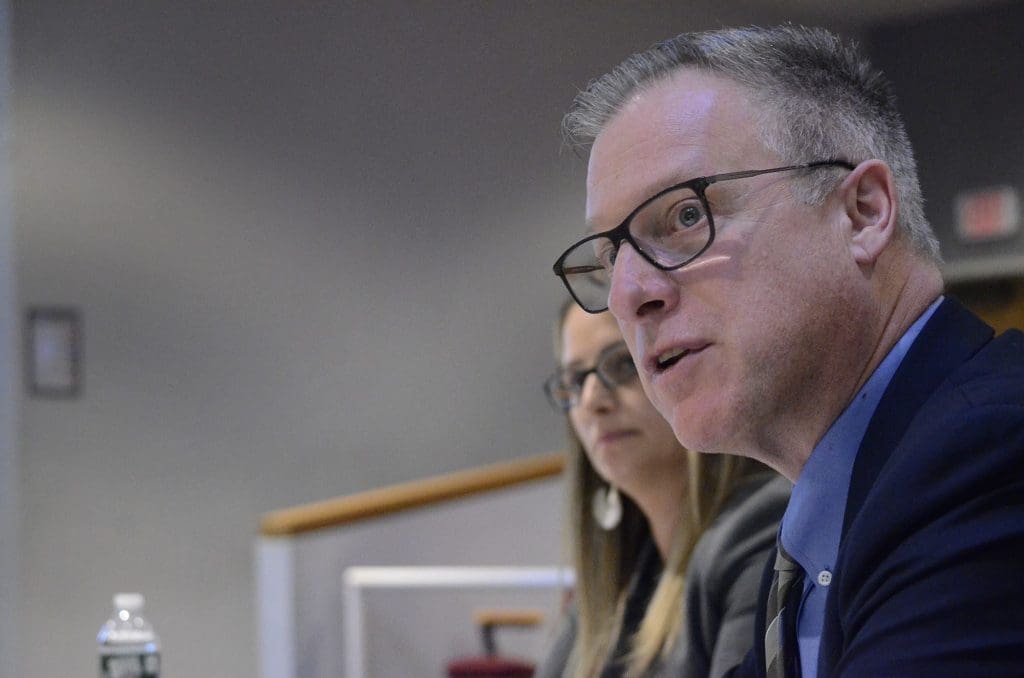 NORWALK, Conn. – Tom Hamilton is retiring after 18 years of shepherding Norwalk’s budgets as a chief administrator.

Hamilton, currently Norwalk Public Schools Chief Financial Officer, is retiring effective Dec. 31, according to an NPS news release. Hamilton came to Norwalk as Director of Finance in September 2003, according to his LinkedIn page.

“The school district budget is scheduled to be submitted to the Board of Education before the end of the year, with a workshop meeting on the 2022-23 Capital and Operating Budgets scheduled for December 7. A national search will begin over the coming weeks to fill the chief financial officer role,” the NPS news release said.

“Mr. Hamilton has dedicated more than 20 years to both Norwalk Public Schools and the City of Norwalk, and his accomplishments will not be forgotten,” Norwalk Superintendent of Schools Alexandra Estrella is quoted as saying. “Those who have worked closely with him know well his strategic mindset, attention to detail, and understated but keen sense of humor. Although we will miss both his professionalism and considerable expertise, we wish him all the best with his future plans. We hope Tom gets to enjoy a lot of time on the ski slopes this winter.”

Hamilton was Stamford Director of Administration for nearly eight years before coming to Norwalk, according to his LinkedIn page. “Earlier in his career, he also assisted the City of Norwalk as director of management and budget,” NPS states.

He switched from managing Norwalk city-side finances to managing NPS’ financial affairs in October 2015. This was called the first step in a longer-range plan to combine the city and Board of Education financial management under one department. The City and NPS are currently undergoing an efficiency study.

Hamilton is 61, according to White Pages.

In 2017, Hamilton was appointed by the Governor to serve as a member of the Municipal Accountability Review Board (MARB), the NPS news release states.

“In 2019, Hamilton stepped up in a volunteer capacity to collaborate with City of Norwalk officials following the unexpected departure of the City’s chief financial officer, ensuring timely completion of the citywide budget process,” NPS states. “His accomplishments also included guiding the city through the 2008 financial crisis, helping to maintain Norwalk’s top bond rating, and managing the implementation of three citywide property revaluations.”

NPS states that it plans to announce a retirement celebration for Hamilton soon.

“Tom is a true professional,” Mayor Harry Rilling said. “He has a unique understanding of both the Board of Education budget and the City of Norwalk budget. He has been a pleasure to work with because he understands limitations and works with the city to develop a budget that will provide our students to have a world-class education. Often times when somebody retires it said they will be missed. It has never more true than Tom’s retirement. He has always been a true gentleman. I wish him well as he turns the page in his life’s book and enters the next chapter.”

What a huge loss for Norwalk. Tom really understood our city finances. Thank you for your hard work!

This man was the only individual who kept the politicians that run the BoE and NPS in check. Can anyone say double digit budget increases from here on out?

I can think of no one who is a better example of professionalism than Tom Hamilton, and so this will be a significant loss to the school system and to the City of Norwalk. Under his inspirational leadership, his department has developed into one of the best in the district. I can guess at why he is leaving at a relatively young age.

Will his replacement have the courage to push back when the district administration wants to do something that is fiscally unwise? I agree with Truthful Norwalker that Mr. Hamilton has been the protector of district budgets, and I don’t expect the superintendent to recommend someone with similar values and a similar attitude about responsibility to the taxpayers.

Um what planet are these other commenters on? When has Hamilton ever pushed back against BOE spending? He’s the master of hiding spending in their impossible to decipher budget. No tears here.

Devastating, but wish you all the best Tom!!!

Tom, thank you so much for your incredible diligence, professionalism, hard work, kindness and courage. It was a pleasure to work with you.

Congratulations Tom, you will be missed.

I have followed our City of Norwalk for 49 years. I do like & respect Tom Hamilton. I remember once in a public meeting a Superintendent of our schools was quite rude to Tom, but Tom kept his cool. Tom has always tried to work with what he is given. I thank him and wish him well.
As to the Board of Education & Tom’s proposal to offer early retirement (that is okay) to the school custodians and then contract out custodial work, I am strongly opposed. Once then-Mayor Richard Moccia was asked about some problem with janitorial services. Like Pilate who washed his hands of Jesus, Moccia’s response was that he didn’t know anything because that work was contracted out.
Where is the responsibility? A business tries to make a profit. Many workers have not been paid a living wage. So, our government helps people. But, our unemployment payments in Connecticut do not even pay enough for a person’s rent. If a person cannot pay Section 8(some support by our government) rent & is evicted, that person can never apply for Section 8 again.
I did work in the Norwalk Public Schools. The custodians there were like family. The kids cared for them. We the People paid the custodians a fair wage. The pensions have become a problem because we all are living longer but do have health problems. Some call for a later retirement age, but that does not take into account the physical or mental stress of a job or the money paid.
Norwalk is a Member of Mayors for Peace, which has been endorsed for years by the US Conference of Mayors. We call for cutting the budget of the Department of Defense (Veterans Affairs is a separate, large budget). Let’s get the money from the military (not from Veterans Affairs). As Senator J William Fulbright said, other countries look to see how we treat ALL of our people, citizens to illegal residents. We have not impressed the rest of our one world.

While it breaks my heart to hear this news, I wish Tom all the best in his adventures ahead. Having worked with Tom on the Board of Estimate and Taxation, as well as on the Board of Education, I know first hand the quality of work he brought to Norwalk. The next CFO for NPS has some massive shoes to fill.

A true and knowledgeable gentleman, he will certainly be missed. A loss for the city.

Although I have criticized Tom on occasion I wish him well. His replacement will need thick skin and be incredibly smart. The next couple of years will be explosive as the Fed dollars dry up and the whining from NPS reaches a crescendo. I recommend a bottle of whiskey and a large bottle of aspirin for his replacement. They will certainly need it. I’m hoping for a Henry Dachowitz clone.

@Taxpayer – its funny because I remember him giving that warning quite vividly and I also remember that warning falling upon deaf ears. What you said, and what @Bobby Lamb seems to conveniently forget, is that he did give that warning and it was completely disregarded. It’s no wonder he decided to retire.

Has anyone noticed that the NPS “Welcome Center” that they wanted to spend $2M on and didn’t get in in the budget now moving ahead with COVID relief funds? I mean honestly how pathetic can these politicians be? Their greed and complete lack of monetary discipline never cease to amaze. So we push through this “welcome center” which, no one except the overpaid superintendent really wanted, because we have such an issue with non English speaking residents not getting the information they need apparently and we do it with one time COVID funds that could have been used to instead perform upgrades and way overdue maintenance on the existing NPS buildings! What an absolute joke the BoE and NPS have become.

2 years from now they are going to be banging their hands on the table saying we need more money to fund this “welcome center” because we created it with money given as a one time grant! All the expenses like personnel costs will surely bloat to an absurd level and you know who will be on the hook? Taxpayers. The worst part is that it is the kids in the NPS that suffer the most when money meant for NPS goes to a stupid project like this. Yet, as residents of this town, we have to pay for our kids to play sports on fields that look like they haven’t been properly maintained in a decade. Oh, but we spent $2M on a turf field behind west rocks that strictly benefits soccer leagues.

All of that money for the “welcome center” should have gone straight to fix the schools and benefit the kids. Instead it goes to a pet project that is utterly useless in the age of the internet. Absolutely unreal.

There is little doubt, Tom Hamilton has earned the right to choregraph his exit exactly as he pleases. Norwalk residents, and especially parents of NPS school children – owe him an acknowledgement of gratitude, and respect. Thank you, Tom.

Finances in general, for Norwalk – is a tricky thing. Numbers are absolute, except when they travel the “accounting” road that is paved with political calculation.

The timing of this announcement – it’s Tom’s prerogative – but I can’t help but speculate. Worked with a bunch of expert CFO’s. They were particularly happy when what you planned happened. Accurate prediction. A skill the best finance guys possess – I believe Tom has it – is predicting the future – their ability to calculate data into a “projection”.

Norwalk – all the youth & children’s very futures – their lives, are at stake. Look very carefully at who you put on the BOE. The selection of the next CFO should be to maintain the standard of excellence that Tom established.

A huge loss for Norwalk….You will be missed.

Tom – I truly enjoyed working with you for eight years. You were at the forefront of keeping Norwalk financially strong throughout the Great Recession. The best Finance Director in all of Connecticut!

My very best wishes to you.

Tom has served Norwalk well on the City side and the BOE side and he was always the consummate professional. He has invaluable financial knowledge of the City and a phenomenal work ethic. It was always obvious to me that he enjoys his career. I remember him taking the time many years ago to speak to youth in the Boys to Men / Girls to Women book club during the financial chapter of the chosen book. I was impressed with him and all of the City’s men and women who were not above sharing their knowledge with underserved youth in our community. Maybe Tom will stay on as a consultant. Either way, I want to publicly thank Tom for his service to Norwalk and wish him well with the next phase of his life.

Will the BOE use Prof Search securing a well qualified replacement ? Or use its traditional “friendly approach” ? Mayor Rilling used Prof Search in securing a City Finance Chief with arguably the best background we’ve seen in many decades. That ought be the standard for the BOE. Along with hiring a Accounting firm not doing business with the City to do a completely independent audit of BOE finances. That’s been a thorn for many decades.

Who wants to bet a New York transplant will replace Tom?