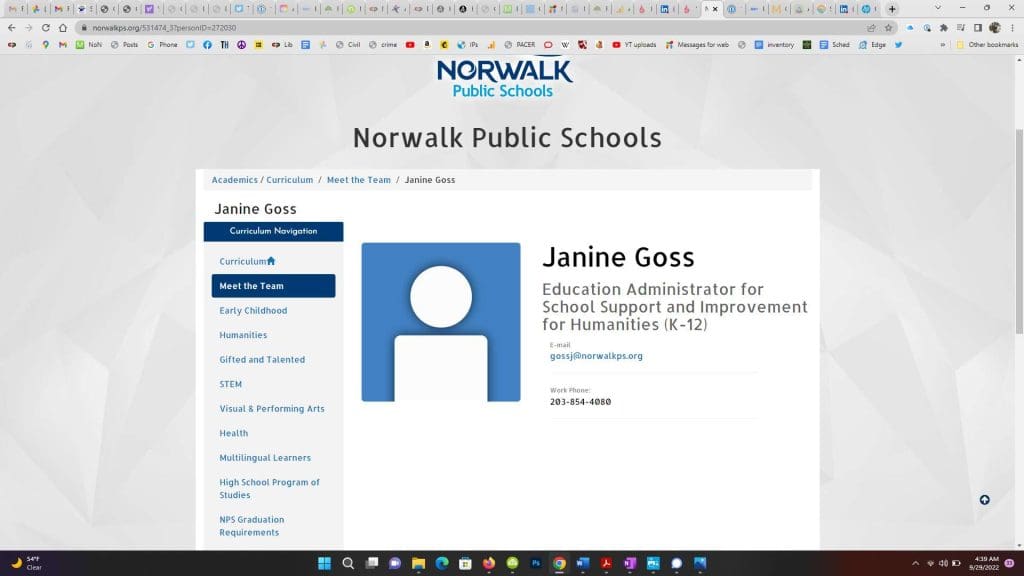 NORWALK, Conn. — A trio of Norwalk Public Schools administrators have quietly left the district. Two of their resignations are on Tuesday’s Board of Education agenda, weeks after their exit. The other is not.

NancyOnNorwalk learned they had left in September.

On Sept. 29, Niccolo Dua, NPS Director of Communications and Marketing said, “Tina, Janine and Jennifer were exemplary colleagues and accepted opportunities that enabled them to further develop their careers.  We were supportive of their decision and wished them well.  These changes occurred after the start of the school year and will be included in the October Business Agenda.”

The September Business Meeting was Sept. 6. Katona and Goss left before then.

Dua, on Sept. 29, wrote, “Lissette Colón is still the Director of Human Resources.”

Tuesday’s agenda also includes 18 teacher resignations and one teacher retirement, 10 of them dating to August. One counselor and one psychologist have resigned.

The agenda includes 53 teacher appointments, four counselor appointments, three Speech & Language Pathologists, two literacy coaches, one math coach, two social workers and one psychologist. Najla Staggers is being appointed Director of Grants at a $130,000 a year salary and Katia Gil is being named multi-lingual learner (MLL) supervisor at the Family Center at a $120,000 a year salary.

Appointments on the Sept. 6 agenda include 43 teachers, one counselor, five Library Media Specialists, nine Speech & Language Pathologists, two math coaches, five social workers and a director of bands for Roton Middle School. Alyssa Canonico was named Assistant Education Administrator for Multilingual Learners and World Languages, Central Office, at a salary of $165,111. Rachel Albone was named out of district coordinator with a $110,000 salary.

See my post on Costanzo’s article. Even though teachers across the country are leaving the profession, 27 teachers in 2 months? I’ve lived in Norwalk for 30 years and I’ve never seen the BOE act as a servant to a Supt. Not one Norwalker is worthy of leading a school or a department? Get ready for the impact of the teacher and administrator shortage. Estrella has to go.

Well said. The Norwalk natives are being pushed out and NYC transplants are being shoved in. Now Norwalk’s Education system is de-facto run by NYC.

How can the BOE seriously say Estrella deserves the pay she gets, or even deserves to continue to be superintendent with this absurd turnover in staff?

Does anyone in administration even care?