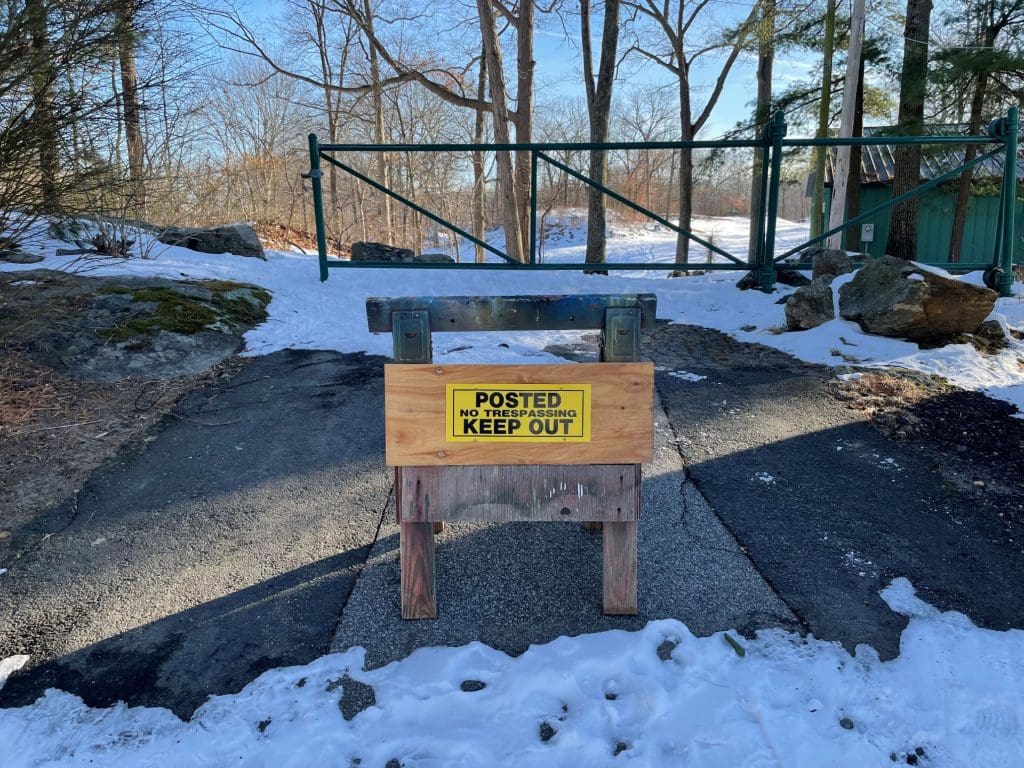 “Our society has fallen to a new low, specifically here in Norwalk compliments most recently of the Oak Hills golf course superintendent. I thought it was weird when there were only two other cars there when in the past 20+ years, days like yesterday would have 30 cars in the parking lot. A rite of passage has always been sledding at the local golf course. On Saturday afternoon, I was aggressively approached being advised the kids and I were trespassing, the cops were being called and I would be getting a ticket.”

Josh Molaver, following up on Mr. Fosina’s comment on Next Door West Norwalk, wrote that after reading Mr. Fosina’s post he reached out to the Authority and received this reply: “Oak Hills Park is a city park, but NO taxpayer dollars go into the maintenance of the park. When the Park is closed, as it was this past weekend, nobody is supposed to be on the property and sledding is always prohibited. We understand the frustration, but the liability is the main issue and with the litigious society we live in we can’t risk a lawsuit, if God forbid, someone got hurt. As a parent I love seeing the kids out sledding but we must protect the best interests of the Park as a whole. My apologies for the inconvenience, and again, I understand your frustration.”

In fact, it is not true that “NO taxpayer dollars” go into the maintenance of the golf course.  Indeed, while preventing Norwalk residents who don’t play golf from enjoying a wide variety of activities in the park, the golf course has required millions of dollars in taxpayer subsidized loans and grants to survive.  Meanwhile, the Authority has stripped the park of trees and poured thousands of pounds of harmful chemicals onto its grounds.

What is going on?  Oak Hills was supposed to be a public park where people could go to enjoy a variety of activities.  Instead, with one caveat, it was turned over to the Oak Hills Authority, to serve the interests of golfers alone.   The caveat was that the Authority ensure that golfers would cover the cost of maintaining the golf course so it would not cost taxpayers a penny.

As another Norwalk resident summed up the issue in a response to Mr. Fosina’s post, the park “is a jewel of a resource that should provide greater access to all citizens for a variety of activities. Relative to sledding, signs and sectioned off areas should be able to deal with the liability issues.”

Instead, “Oak Hills is run like a Ol’ boys’ club (both D and R). The issue goes back a decade, likely even more. The club runs out of money, asks the city for forgiveness so it can be independent, the city acts tough but subsidizes the park, the park steps up its expenditures, says everything is fine, then comes back hat in hand to the city and the cycle begins again. This cycle has happened numerous times.

“Golf courses have hazards – sand traps, water – this golf course is a moral hazard to Norwalk’s taxpayers (https://en.wikipedia.org/wiki/Moral_hazard)…If you wish to plug a leak in your taxpayer dollars, keep an eye on the park authority – review their financials, attend their meetings, attend when they present to the Board of Estimate and Taxation. This is a resource all of Norwalk is subsidizing.”

If the grounds are full of toxic chemicals I would not bring children there – for any reason.

Not a golfer?
People will say and do anything to get their way and the folks who oppose this fine recreation facility won’t be happy until it is vacant land. Get over it! Oak Hills is a great asset for Norwalk. Sledding? It is all good until someone breaks their neck and then the opposition will litigate until the course gets closed.

Operating Oak Hills Park for the benefit of City residents has long been “challenging” for our elected officials. The Oak Hills Authority works for City and local golfers. Even though its technically a “public gold course”. The Authority has been long challenged keeping the once fabled Restaurant operating. Legions of City restaurants held affairs and weddings at the fabled Restaurant with its splendid setting. No surprise City residents seeking to use Oak Hills for kids sledding run afoul of the Authority. The Authority answers to itself. Its a Norwalk tradition.

So when do we set up another Authority to operate the long discussed City Marina ?
Norwalk needs more “Authorities”. How about an “Authority” to secure a 4 yr college for Norwalk ? Everyone knows “Authorities create great cities”. Will the Authority secure an operator to secure a fully functioning restaurant next spring ?

Now can we talk about building a long discussed City Marina ….? We’d need another “authority”. !

Here’s a key question: Is Oak Hills Park a “park” or a golf course? Start with this and allow the management and policies to become better created and defined, collaboratively with residents who want a park in this area of Norwalk.

The Authority’s concerns about liability are without merit. Connecticut provides for immunity from liability for property owners (private and public) that make their land available to the public free of charge for recreational purposes. The statute explicitly identifies “sledding” as covered by the immunity. See Conn. Gen. Stat. Section 52-557f.

Thanks Adam blank . It’s nice to have an attorney weigh in with what the law actually states. Tired of people using the fear of lawsuits as an excuse for something they don’t want

Most cities in Connecticut allow sledding and other recreational activities on their public golf courses. The city of Norwich even had this to say in an article titled “Where You can bring your family for snowy, winter fun in Eastern Connecticut.”

Here’s a link to the full article: https://www.norwichbulletin.com/story/news/local/2022/01/28/where-you-can-bring-family-and-get-some-sledding-sled-winter-hill-eastern-connecticut/9239333002/

Just curious why you dont attack your neighbor that cleared out his backyard woods and runs a full contractors yard there across from the tennis courts of the golf course. It seems your anger is always at the golf course as long as i can remember. How about starting with your own side of the street as well? That is a gross violation of our zoning laws here in Norwalk. Makes much more sense than worrying about sledding!

Thank you Adam Blank for the clarification. And good point Audrey Cozzarin. At St. Andrews, the “birthplace” of golf, the public can roam the course, even with their dogs, at any time. Golfers yield to pedestrians and pedestrians yield to golfers. I have been playing Oak Hills for over 30 years, up to 50 rounds per year. Last year, after the irresponsible act of removing the trees at the 14th tee, the “country club” attitude regarding restricted tee times, and the increasingly poor condition of the course, I took my business elsewhere. The Oak Hills Authority is a sham, dating from the time they erected a 50,000 square foot clubhouse with no bar or snack bar. They have consitently made false excuses such as the liability issue. And yes, the taxpayers are paying for it with no say as to how the PARK is operated.

Danbury has one of the best public golf courses in the country and has for years set aside a specific area for sledding. A wonderful high and long running slope that has been used by generations of children for good clean winter fun. OHA needs to look beyond their self righteousness and accept the fact that the taxpayer owned land that the limited use golf course sits on needs to be used by others, for purposes other than serving the needs of a handful of guys hitting and chasing a little white ball around.

Bob if you are going to talk about St. Andrews get it right the only day that people can walk all over the golf course is on Sunday when the course is closed. Yes there is a road that goes through it to go the beach where people yield to each other but they treat the golf course with respect. Oak Hills was in great shape again this year and that is why so many people are playing there. Mack I don’t know where you have been playing but Richter Park hasn’t been listed in the best courses in the country in years and it even isn’t listed as one of the best ones in the state anymore. Yes they have an area for sledding but it doesn’t effect the golf course.

Only place I recall seeing kids on sleds is at West Rocks school. And at Oak hills.
But I’ve only been here about 40 years. After Kiddie Town closed down I don’t ever recall seeing a sled for sale in Norwalk. Sledding gone forever from Norwalk ? Kids only allowed to play in front of an I pad ? Snowmen and igloos gone forever too ?

@Audrey: Oak Hills is a park that contains a golf course, a tennis center, and a nature center with hiking trails. Exactly what entitles you and the West Norwalk elites to have your own personal park.

@Bob Giolitto: I, for one, am glad that you took your business elsewhere. That makes one less phony that we have to deal with. BTW: It was Eversource who removed the trees by the 14th tees, not Oak Hills.

Bill Wrenn: We’d be more than happy to see you relocate to Norwich.

Charlie Brennan: Thanks for clarifying the actual state of reality for Bob and Mac.

Charles Brennan……..Thanks for letting me know that Richter Park Golf course is no longer as highly ranked as it was in years passed. This information certainly helps support why Oak Hills will not permit sledding on any part of their course. I don’t play golf any longer, but I do enjoy sledding with my family and have seen how popular the spot at Richter has become. Norwalk would benefit greatly by providing a similar area at Oak Hills.