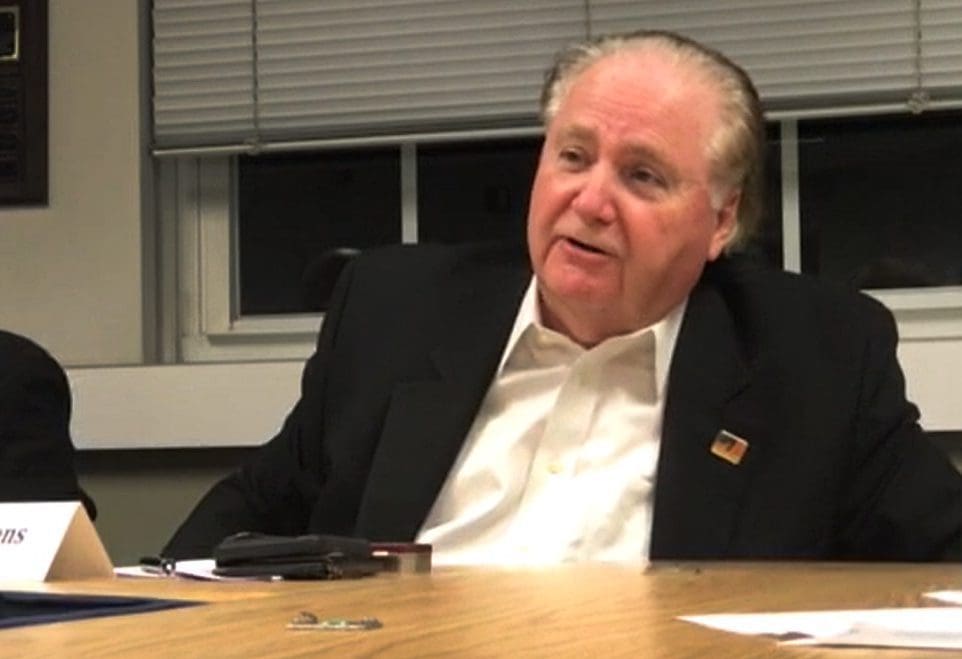 NORWALK, Conn. — The Oak Hills Park Authority met Wednesday evening, in secret, a not-too-unusual executive session – an act that may be illegal.

NoN said that if the budget were discussed in an executive session, a complaint would be filed with the Freedom of Information Commission.

(6) “Executive sessions” means a meeting of a public agency at which the public is excluded for one or more of the following purposes: (A) Discussion concerning the appointment, employment, performance, evaluation, health or dismissal of a public officer or employee, provided that such individual may require that discussion be held at an open meeting; (B) strategy and negotiations with respect to pending claims or pending litigation to which the public agency or a member thereof, because of the member’s conduct as a member of such agency, is a party until such litigation or claim has been finally adjudicated or otherwise settled; (C) matters concerning security strategy or the deployment of security personnel, or devices affecting public security; (D) discussion of the selection of a site or the lease, sale or purchase of real estate by the state or a political subdivision of the state when publicity regarding such site, lease, sale, purchase or construction would adversely impact the price of such site, lease, sale, purchase or construction until such time as all of the property has been acquired or all proceedings or transactions concerning same have been terminated or abandoned; and (E) discussion of any matter which would result in the disclosure of public records or the information contained therein described in subsection (b) of section 1-210.

(b) Nothing in the Freedom of Information Act shall be construed to require disclosure of:

(2) Personnel or medical files and similar files the disclosure of which would constitute an invasion of personal privacy;

The Authority was not trying to do “below board” or “sideboard,” Dickens said in an afternoon phone call, 50 minutes before the meeting was scheduled to begin. “We don’t get city funding.”

The City has restructured the Authority’s debt three times. Most recently, in February 2019, the City dropped the interest rate to zero.

There are “no secrets,” Dickens said. “It’s a battle every year to keep the lights on,” and the Authority just wanted to discuss things like employee salaries privately. It’s a Special Meeting, a working session to discuss the budget.

He goes in front of the Common Council Finance Committee every month to go over the Authority’s finances, he said.

NancyOnNorwalk said it wasn’t the budget information that was the issue, it was the Freedom of Information requirements for an executive session and the public’s right to attend the meeting, albeit virtually.

OHPA Attorney Randall Avery did not respond to two emails asking for a legal justification for the executive session.

Late Wednesday evening, Dickens said that the Authority did meet via Zoom. The budget passed 6 to 1.

There are minutes available of the meeting, Dickens said.  “Yes we can post them, there is nothing to hide here.”

You can watch the Norwalk Parking Authority on the City’s YouTube channel, but there are no YouTube videos of Oak Hills Park Authority meetings.OHPA members “feel funny regards video,” Dickens said.

Dickens became chairman in July 2019, according to meeting minutes, taking  the role after Jerry Crowley departed. He is scheduled to appear before the Council Finance Committee on Thursday evening.

Recent agendas have featured these reasons for executive sessions:

Then there are these items:

Finally the OHPA looks like they may be having a successful year thanks to the pandemic and now they are trying to hide the finances from public eye? The town (and taxpayers) have been looking away for too long with regards to refinancing of the debt owed and now they want knowbody to see that they may have some extra funds to pay the taxpayers back? I did see in the minutes that a payment of $12k was made for rounds played but why does the payment not include the “free” rounds that were played by the “membership” programs they offered this spring when they were out of money? I’m sure there were thousands of those rounds and the city does not get paid for those? If that’s the case the OHPA has found a loophole to screw the taxpayers out of paying back the debt again. Next year they will probably do all membership rounds and not pay back a dime!

Having been a Norwalk resident pass holder for almost 30 years I can’t afford to pluck down $1200 for a memebership. However a “Well to do” New Canaan , Darien , Wilton resident who can easily pay the membership gets to book 14 days in advance while I’m only allowed 7 days, little wonder why I can’t play till after 11am on weekends anymore.

Adding more insult to it, having a membership allows the Non Resident (Wilton, Darien, New Canaan) people during the week to bring guests and pay RESIDENT RATES!! Here I’m a Norwalk resident for almost 3 decades having to pay $100 a year for the privilege to pay resident rates and the non residents can bring 3 out of town buddies and pay the same rate I do minus the $100 I pay for the privilege to live in Norwalk.

This is right off the Oak Hills Website from the ladies association
Tournaments may be played on Tuesday, Wednesday, Saturday or Sunday and must be played with another member of the OHWGA. Wednesdays are the only day where the Association has blocked tee times. Also, non-resident members playing on Wednesdays will be charged resident rates.

The golf course was in great shape. The restaurant is finally the right size. And everyone should be reminded that our other parks cost us $3 million a year to maintain including fees and permits collected, while this is a break even operation.

What is really amazing is how much focus we put on the golf course when we have a housing authority with 20x the budget that never once has produced a clear set of financials that anyone can find or follow.

And what happened to Paul Cantor, or is he in moderation reminding us what a money pit oak hills is and how it should be more apartments instead?

Wow! What an overt and politically biased piece by NON. I don’t recall any coverage by NON regarding the “back room” deal for the “new Norwalk High School” that was being conducted in Hartford out of the public’s view. What happened with the Freedom of Information Act on that one?

John Biased piece ? Look at all the executive sessions, I think this is alarming, why can’t they be open with the taxpayers? . Mr. Dickens says “It’s a battle every year to keep the lights on,” and the Authority just wanted to discuss things like employee salaries privately. Doesn’t The Hour and N.O.N post city salaries on a yearly basis? Why secrecy here?

Not one public golf course in Fairfield County can you get an all exclusive membership for residents let alone Non Residents. Only Oak Hills can you join for $1200 a year, Silvermine CC somewhere in the neighborhood of 10k and Shorehaven for probably twice that of Silvermine

Bryan maybe have Oak Hills raise the membership fee to even half of what Silvermine charges and take the excess funds and spread it out to all parks in the city. I’ll say it again “It’s not Norwalk’s golf course anymore”.

I agree 100 percent with Advid golfer. I too could not afford to pluck down $1200 and now it’s impossible to get those coveted early tee times on weekends. With the Covid virus going around it’s no secret that all golf courses just not here but around the world are packed turning players away. Golf is the safest social distancing sport you can do and courses are benefiting from it.

My opinion this was the worst year the course could have implemented the memberships. A player who buys the yearly membership after 30 rounds the course is on the losing end. Play 50 times nets out to $24 a round play 75 rounds nets out to $16 a round and I’m sure some are playing 100 rounds or more to $12 or less per round. The weekend round with a ID card is $40.
The people buying these memberships are doing the math. I know of no Municipal golf course in the area that offers this type of membership for reasons i just stated. Oak Hills is on the losing end.

As I stated above courses are turning away players and at Oak Hills a weekend round is $40 and much more for a Non Resident player yet Oak hills is getting far less income from these full memberships and letting non residents pay resident rates is just WRONG!

We need to make this Norwalk’s course again.

This expains it all. My son’s and I have not been able to book a single tee time before 5:00pm all summer if at all. Too many times no tee time. Let’s look under the hood.Less out of towners going forward.

I am a newer member of the OHPA. One of my first issues was also all the executive sessions regarding the restaurant. I own a local food business and I signed up for this to help out the food operation at the park in any way possible. I went back to read all the meeting minutes to get up to date but there were so many executive sessions that I wasn’t able to learn much. We don’t discuss the restaurant anymore under executive session since I’ve been a member. I believe we should be as transparent as possible and we are working towards that. We are on the right path under new leadership, I hope this progress continues.

As for the season passes, it was something we did this year to raise funds that were badly needed. It wasn’t a perfect solution and we are aware of it. We were shut down for a few weeks, we were able to open again. We are discussing what changes we need to make to improve the situation for next year. I appreciate the feedback and please remember that the public can attend meetings and make comments.

Passing the wealthy Non residents paying resident rates without buying the $100 ID card like a Norwalk Resident has to, plus getting 14 days advance bookings while a Norwalk Resident gets 7 days maybe the Residents would have known and objected in an OPEN FORUM! Know I think we the golfers know what was going on in executive session. I see nothing in the minutes about this farce! Carl ever hear of Roberts Rules of Order?

@Avid Golfer: You might want to check your facts. Your statement that no other public golf courses in Fairfield County offer resident memberships is incorrect. You might want to start with Richter Park Golf Course in Danbury and go from there. Additionally, Silvermine and Shorehaven are private country clubs so referencing them as examples is totally ridiculous. Private country clubs have initiation fees (Shorehaven is five figures), annual dues and monthly minimums at their restaurants.