The Senate voted 16-11 Thursday for final passage of a bill legalizing the production, sale and adult use of recreational marijuana in Connecticut, bringing down the curtain on a frantic finish to a campaign that steadily unfolded over a decade.

Gov. Ned Lamont is poised to sign the measure, making the possession of 1.5 ounces of marijuana legal as of July 1, a step in a journey that began with the decriminalization of small amounts of cannabis in 2011, followed by legalization of medical marijuana in 2012.

“The war on cannabis, which was at its core a war on people in Black and brown communities, not only caused injustices and increased disparities in our state, it did little to protect public health and safety,” Lamont said.

Commercial production and sales are likely to be delayed by at least a year of work by the Department of Consumer Protection and a new 15-member Social Equity Council within the Department of Economic and Community Development to fully develop a regulatory and licensing structure outlined in the bill.

Passage, though threatened in recent days by internecine differences over access to licenses to participate in the new industry, reflects the steady move by states away from the largely discredited criminalization of marijuana.

The vote came on the 50th anniversary of President Richard Nixon’s declaration of illicit drugs as “public enemy No. 1,” the unofficial declaration of a racially tinged war on drugs that contributed to the highest incarceration rate in the world and, more recently, a reckoning over America’s racially disparate enforcement of drug laws.

“I think it’s probably appropriate, actually,” Sen. Gary Winfield, D-New Haven, a member of the Black and Puerto Rican Caucus and the bill’s key Senate sponsor, said of the timing. “It wasn’t planned. But sometimes things happen for a reason.”

The new law will automatically expunge the criminal records of offenses involving no more than 4 ounces of marijuana and allow others to petition for erasure. It states that the smell of marijuana will not give police cause to search an individual or their vehicle but will allow them to test for intoxication.

The vote marked the third time in nine days a legalization bill had passed the Senate, once in the regular session that ended June 9 without action by the House. A version passed Tuesday in special session was amended by the House on Wednesday and returned for final passage. Sen. Mae Flexer, who brought her daughter to the hastily scheduled special session, watched the vote tally for cannabis legalization. Tally boards are on both sides of the chamber. (Mark Pazniokas, CTMirror.org)

“Third time a charm,” said Sen. John Kissel, R-Enfield, if ruefully. With nearly every other Republican in both chambers, Kissel voted against legalization, a step favored by a solid majority of residents in most polls.

The actual split in the Senate over legalization was narrower, 19-17. But nine senators missed the hastily called session: three who had been in support and six opposed. One of those absent was Sen. Kevin Witkos of Canton, the only Republican senator who voted with the previous version.

The session was called the morning after the House voted 76-62 to pass the bill but only after rewriting the rules for awarding valuable licenses for cultivation and sales at the insistence of Lamont. Without the change, which the administration saw as undermining social equity, the governor had threatened a veto.

Marijuana is fully illegal in only five states, though public-health officials warn about adverse effects, particularly on developing teens, and police are concerned about the lack of a simple test to determine intoxication by marijuana.

Kissel said the trend in other states was no reason for Connecticut to move beyond decriminalization and closely regulated medical cannabis, which is currently available to about 55,000 holders of marijuana prescriptions.

“Why can’t Connecticut be that shining city on the hill, that oasis?” Kissel said.

Senate President Pro Tem Martin M. Looney, D-New Haven, compared the federal criminalization of marijuana to Prohibition, a social experiment that failed to end the abuse of alcohol, while fueling bootlegging and the growth of organized crime.

Nixon’s war on crime arose from an animus towards African-Americans and young anti-war protesters. Nixon adviser John Ehrlichman memorably described its origins in a 1994 interview with Harper’s Magazine.

“You want to know what this was really all about?” Ehrlichman said. “The Nixon campaign in 1968, and the Nixon White House after that, had two enemies: the antiwar left and Black people. You understand what I’m saying? We knew we couldn’t make it illegal to be either against the war or Black, but by getting the public to associate the hippies with marijuana and Blacks with heroin, and then criminalizing both heavily, we could disrupt those communities.”

Joe Biden’s role in passing ever-tougher drug laws as chair of the Senate Judiciary Committee was an issue in his presidential campaign, when he endorsed the decriminalization of marijuana.

Passage comes after successive elections in which Democrats made gains in the General Assembly, winning majorities of 24-12 in the Senate and 97-54 in the House. Only four years ago, the Senate was tied and the GOP was five seats shy of a majority in the House. 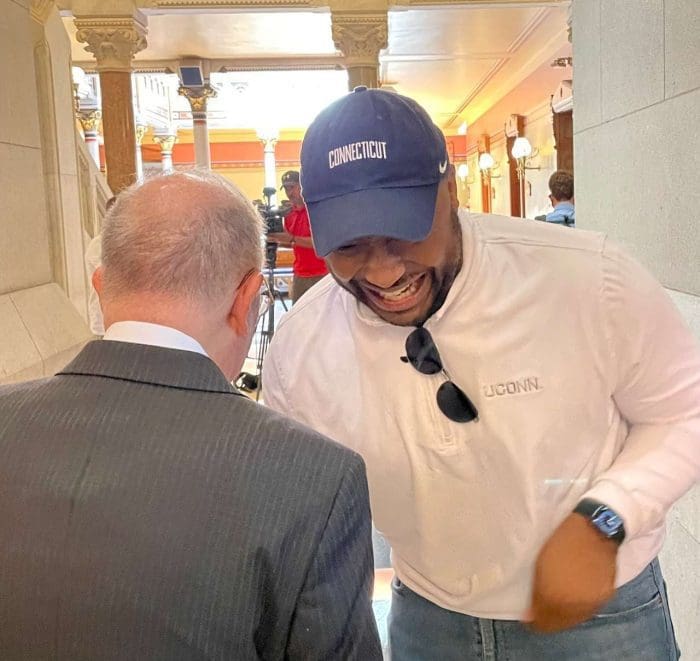 Passage is a victory for Lamont, a Democrat who proposed a legalization bill in February, then scuffled with lawmakers and community advocates over the extent to which legal marijuana could be an instrument to address racial, economic and social inequities.

Commercial production licenses for the recreational market would cost as much as $3 million, while the fee for a micro-cultivator would be $1,000. Half of all licenses for cultivation, packaging, transportation and sales are reserved for social equity applicants, who must be from census tracts disproportionately impacted by the war on drugs.

The legal age to possess and use cannabis will be 21, though violations cannot be punished by jail time. The law will permit the possession of up to 1.5 ounces in public and five ounces at home or in a locked vehicles. Holders of medical marijuana cards will be able to grow their own, beginning in October.