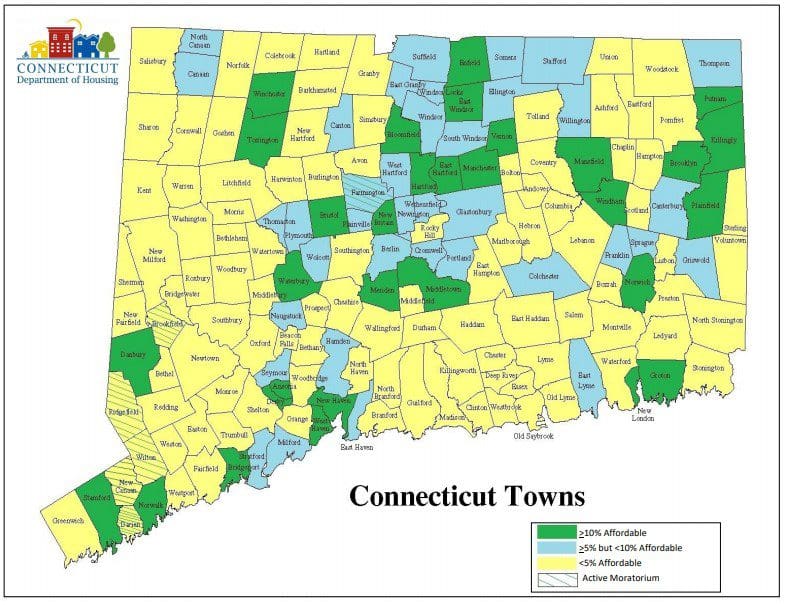 Throughout the last decade, I’ve worked in several capacities within the affordable housing sector, and one thing has stayed true: It’s very difficult to enact meaningful reform in Connecticut — appropriately labeled the Land of Steady Habits. Legislators, advocates, government officials and others tend to agree in principle that affordable housing is important when it comes to supporting our state’s most vulnerable, spurring economic development and diversifying our towns and cities. However, the exact methodology by which Connecticut could implement meaningful reform is often a point of great contention.

Under the administration of former Gov. Dannel P. Malloy, a great deal of progress was made when it came to funding the development or redevelopment of affordable housing units across the state. From 2011 through 2018, Connecticut:

The Malloy administration also convened a limited-scope task force known as the Fair Housing Working Group, chaired by former Housing Commissioner Evonne M. Klein and State Rep. Roland Lemar, D-New Haven. This bipartisan, diverse  group’s charge was not easy. Its mission was to provide recommendations to overhaul the state’s antiquated local zoning laws, which have perpetuated segregation in Connecticut for decades. Most people do not realize that local zoning laws are a privilege afforded to our towns and cities through state statute, effectively making them a state power that has been passed on to the municipal level.

While unsuccessful at the time, the working group did begin a dialogue that has only grown in recent months. With the formation of Desegregate Connecticut, a coalition of lawmakers, advocates, attorneys and others who are dedicated to implementing widespread change, the state is now uniquely positioned to tackle an issue that will be essential to our economic recovery in the age of COVID-19: zoning reform.

I’ve learned that zoning and affordable housing issues rarely take center stage under the gold dome, but I’ve also learned that these issues are likely more controversial than any of their counterparts. Zoning reform would help to spur our economic recovery because it will ease the opposition’s arguments within the communities that are opposed to development and who have grown very articulate over the years when it comes to denying multifamily housing altogether — usually under the guise of preserving the town’s character, being worried about the overcrowding of school systems or concerns over a lack of parking.

The facts speak for themselves. Communities with a diverse housing stock are vibrant, they thrive socially and economically, and they provide upward mobility to so many individuals and families — allowing them the chance to attain the American Dream, which is too often out of reach.

The Connecticut Department of Housing releases annual town-by-town data for how much affordable housing is in each community. The last time they compiled this list was in 2019, but the last time it was mapped was in 2017. This compelling visual shows just how much we still have to do.

If we work together, even though it’s already been 52 years since President Lyndon B. Johnson signed the Fair Housing Act into law, we can make the 2021 legislative session historic. And it wouldn’t require any state level appropriation, an attractive incentive when our coffers are already so constrained due to the pandemic.Since we’re already seeing certain leaders in Washington D.C. roll back transformative measures like the Affirmatively Furthering Fair Housing rule, we have an obligation here in Connecticut to enact meaningful reform that can stand for generations to come. It would be life-changing for the most vulnerable among us, it would create thousands of well-paying jobs, and it’s long overdue.

The time to act is now, let’s work together to desegregate Connecticut.

Dan Arsenault is a former state Department of Housing official, overseeing the agency’s legislative and communications program under the administration of former Gov. Dannel P. Malloy. This article was first published by the Connecticut Mirror.

This effort will stimulate CT’s micro economies of our household moving and legal industries. The real estate crash will more than offset those gains.

Sadly our politicians can’t see more than an exit ramp or replacing 120 year old bridges with the same technology. And while they tilt at windmills we have the highest energy prices in the country, driving out more and more businesses, who’s workers take 2 hours to commute 30 miles.

What NON readers should keep in mind is that Dan Arsenault is a paid lobbyist. He’s PAID to write this trash.
Another amusing note: His ex boss Dan Malloy lives in a town that’s 98% white. The hypocrisy is outrageous..A phrase from the Orwell’s Animal Farm comes to mind: “We are all equal, but some of us are more equal than others”.

“ Communities with a diverse housing stock are vibrant, they thrive socially and economically”. This would be where he should provide examples in his letter to support this claim. For example, he could list the cities with the most affordable housing and describe how they thrive socially and economically. He could describe how their school systems rate, their tax rates are, and what their crime rates are like. Let towns and cities decide for themselves based on their voters how they want their development to be. The towns and cities elect their mayors, selectmen, and town councils to represent them and make these decisions.

This all sounds so genuine and sweet.

In reality it is a dishonest, corrupt and ineffective way to help poor people. Arrogant politicians and elite crony developers should not micromanage people’s lives.

The language and definitions commonly used are vague and dishonest. Try to get this guy to submit a simple definition of “affordable housing”.

The existing definition does not only count price! To be “affordable” it must include government control through collection of financial statements and control through deed restrictions.

Many many low cost apartments are counted as NOT affordable because they do not submit to the government control.

This guys ideas could not be more arrogant and wrong.

To make any meaningful decisions about housing we must start by creating an honest definition of affordable housing.

Then an accurate way to count the housing stock is needed.

Connecticut “Affordable Housing” is the most expensive to build. It costs 2 to 4 times what it costs regular construction.

Where does all that extra money go?
The regulatory steps and costs are enormous.

Bryan and John’s comments here are sad examples of the same limited thinking that handicaps our own economy. There’s a bunch of sound and fury – whataboutism, ad hominem attacks – but you gotta ask, “where’s the beef?”

Economists estimate that across the US, zoning codes are holding back about 5% in GDP growth.

That’s the beef. Before it became fashionable to exclude people from the places we live, people understood that housing is the engine that drives the economy, not the other way around. It provides jobs, and keeps the cost of living down.

I mean, seriously, can anyone argue with a straight face that CT has somehow “run out of space”? That’s patently absurd. And even when you can’t build OUT, you can always build UP.

Re Bryan’s comment: The problem with increasing the capacity of congested highways is that it enhances the traffic patterns that created the problem to begin with. Adding lanes to I-95, for instance, would encourage even more people who work in Stanford to obtain homes in Shelton. After a temporary reduction in congestion, the congestion would return, just as bad and with more of it. This has been well known to transportation planners and highway engineers for decades. Light rail, which Bryan mentions, is the far better solution.

Meek & O’Neil comments are a real eye opener for me.

@David Mucci – Thanks for the thought. Please tell us which of my points was incorrect. The point of the paid lobbyist selling his wares OR the liberal politician selling diversity from an homogeneous town in rural Ct? Again,thank you as I’m always looking for constructive criticism from open minded peers.

So there are immutable laws like the laws of physics, say, that we cannot dream of changing. Close behind are laws of self styled human superiority and prejudice and privilege. Theoretically, these are subject to change, but are any of us going to live long enough to see that happen? So, how about, while we are awaiting the coming of the Messiah we just up the ante:-let the privileged pay a high tax for their privilege. Let our “whitish” suburban towns who use their zoning and overall power to forestall efforts for affordable housing in their towns pay for the ability to use cheap immigrant and other poverty stricken labor to perform their menial tasks and then send them home to live elsewhere. Let them shoulder the costs of educating and providing health and other social services for their workforce that are currently being unfairly borne by their integrated city neighbors; the lower their percentage of affordable houising the higher the tax. And the more affordable housing with the necessary associated services the higher the subsidy.
DOES THAT ACHIEVE AN INTEGRATED SOCIETY WHERE WE ALL LEARN TO LIVE TOGETHER? NO! But there is something to be said for leveling the playing field while we are trying to figure it out.