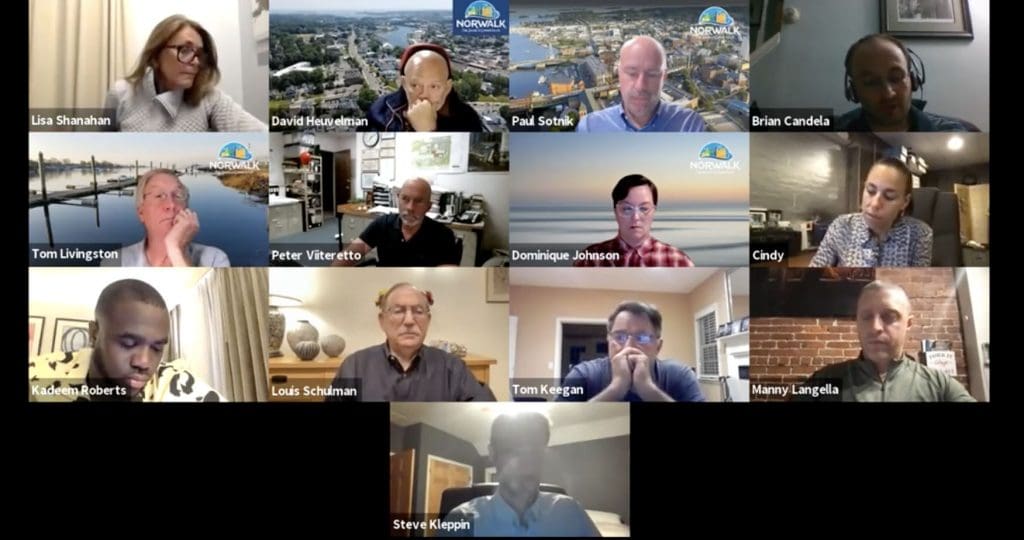 NORWALK, Conn. — The plans to merge Norwalk’s Planning and Zoning Commission took another step forward Tuesday as the Ordinance Committee unanimously advanced the plans to the Common Council.

Council member Tom Livingston (D-District E) reviewed some of the history including why the Commissions were joined together in 1971 and then separated in the mid-1980s.

Brice Kimmel, a former Common Council memo, wrote a letter in support of the merger.

“I am pleased that the Ordinance Committee of the Norwalk Common Council, following the recommendation of the city’s POCD (Plan of Conservation and Development), is examining the merits of combining the Planning and Zoning Commissions. I support this effort and hope that the two Commissions are combined,” he wrote.

Kimmel said that “for too many years, the lack of serious planning allowed zoning to drive development,” and that he watched citizens struggle to navigate the complex process.

“I served on the Common Council for 14 years and was perplexed as residents had to come to City Hall to voice their opposition to projects that made little sense to them but conformed to antiquated zoning regulations,” he said, adding that he also supported the ongoing zoning regulations revision. “Planning should always be the driver for development zoning regs need to support the goals of the city’s long-term plans.”

“I’m in favor of the merger of Planning and Zoning,” he said. “I have seen both sides of it. Too often you will get one body, and usually it’s the Planning Commission, that will dive very deeply into the zoning aspects that are not in their purview which ends up taking quite a bit of staff time, applicant time, that would be eliminated with the merger.

“I don’t see there being any sort of better product coming from a split planning and zoning than having a single body making those determinations,” Blank added.

Resident Diane Lauricella raised some concerns about the proposed merger, particularly the workload for the volunteer-based commission.

“I feel that it is premature to merge these two important Commissions at this time until after we are finished with the new zoning regs in 2022,” she said.

Lauricella said that she believed that if the two Commissions were merged, “you will not have checks and balances.”

The combined Commission would have nine members, with three alternates and no more than three can be from any district and no more than six can be from a single political party. One way to address the workload question, according to Planning and Zoning Director Steven Kleppin, would be to have a subcommittee deal with the capital budget which is one of the most time-consuming tasks the planning commission currently has.

Kleppin also noted that the City has multiple levels of checks and balances, such as having to go through the Common Council’s Planning Committee for studies and funding, in addition to going through the joint Planning and Zoning Commission for approvals.

“Specifically as it relates to large development projects, the Planning Commission does not see those unless in specific cases,” he said. “It’s not necessarily their job to make those decisions. That tends to muddy the process.”

Proponents for combining the two said that this would allow for Commission members voting on zoning decisions to have a better understanding of the City’s plans and goals.

“I’m all for leaner and meaner bureaucracy and I think this is a move in the right direction,” Council member David Heuvelman (D-District A) said, noting that he did want to make sure planning didn’t get pushed to the side.

An “extensive revision” to the city’s tree ordinance was advanced to public hearing after months of work by Tree Warden Chris Torre, Livingston, and Lisa Shanahan (D-District E), chair of the Ordinance Committee.

Shanahan said that there was “consensus that more needed to be done to protect our city trees and shrubs.”

Torre said that the Norwalk “tree canopy is 17% below what it should be and this will help get us there.”

“Our ordinance was pretty much a generic ordinance,” he said. “This thing started with a few people talking about trees and it’s honestly become a movement. This is a great start. It definitely protects the trees, especially around construction, but it also makes the City of Norwalk good stewards to the environment.”

The ordinance is based off of the Hartford tree ordinance, Shanahan said, a law put together after Hartford did extensive canopy and research studies.

The ordinance, which covers all public trees and “legacy” trees, which are historic trees that add value to the community, includes language that strengthens and formalizes the role for the tree warden to protect the trees that exist and conduct work that aims to add more to public properties. Shanahan said the Tree Advisory Committee would be in charge of conducting a tree inventory and tree canopy study, as well as a yearly state of the forest document.

“These people are the experts,” Shanahan said, adding that they would help the Mayor and Common Council on what direction the city’s urban forest should take.

There are provisions in the ordinances for trees that have to be cut down because they are hazardous and there are also provisions requiring trees to be protected during construction activities.

The Committee voted unanimously to send the proposed updates to a public hearing at their next meeting.

I believe it would be worthwhile to review what the Charter actually says about the Planning Committee’s role in the capital budget process. I’ve watched the Commission weigh in on the merits and costs of various capital requests — and this of course leads to long debates and public hearings. The Planning discussion was not much different from what happens when Council members debate these same items. If the role of the Commission is only to ensure that capital requests conform to the POCD, then it would not take so long to discuss.

After serving on the Planning Commission, I never fully understood why it was separate from the Zoning Commission. Even more puzzling was the commission’s role in reviewing the city’s budget.

I’m heartened to hear Lisa Shanahan, chair of the Ordinance Committee advance a tree ordinance in Norwalk to better value and protect trees and shrubs, and to herald a Tree Advisory Committee for a tree inventory and tree canopy study. That effort is environmentally progressive, especially with Tree Warden Chris Torre’s acknowledgement that Norwalk’s tree canopy is low — 17% lower than it should be.

Also, during a time of climate crisis, a community’s tree canopy is related to its climate resilience — all the more reason why we should save trees when possible.

Aside from providing shade, shelter and food for animals, trees are the planet’s lungs, using up carbon dioxide and releasing oxygen. Trees also absorb rain water, prevent soil erosion, and improve our quality of life — a stark contrast from development that focuses too much on concrete, which absorbs no water from floods.

An old rule is that it’s the “people” not how the “organization” is arranged that secures good results. Our persistent challenge is selecting well qualified residents to serve who aren’t Party faithful.

I applaud any and every effort to promote the preservation and expansion of Norwalk’s tree canopy. However, I would also hope that those that are proposing the new Tree Ordinance will easily be able to answer ALL of the following questions. If they can’t, then I’d suggest that their work isn’t yet complete. (There are way too many ordinances and regulations in Norwalk City Code already that have vague- or entirely non-existent -processes for enforcement and appeal. We don’t need another one.)
1)What is the definition of a “legacy tree”?
2)Can trees on private property be designated “legacy trees”? (Reading between the lines of the NoN article, I’m guessing “yes”.)
3)Who makes the determination that a tree is a “legacy tree”?
4)What restrictions are proposed for “legacy trees” (e.g. restrictions on pruning, removal, etc.)?
5)Can a property owner challenge or appeal the designation of a tree on their property as a “legacy tree”? If so, how, and to what body?
6) What is the process by which a property owner would seek approval for significant work on – or removal of – a “legacy tree”?
7)If a homeowner a) believes a “legacy tree” poses a risk to their home or safety, b) wants to remove it c) has the proposal to remove it rejected, and d) that tree falls and damages life, limb or property, is the City prepared for the lawsuits against the City that will assuredly be filed by the property owner and their insurer?
8)If a property owners’ insurance premiums are hiked – or worse, insurance can’t be gotten – due to the presence of a “legacy tree” that the insurer deems poses a risk, can the property owner make a claim against the City?