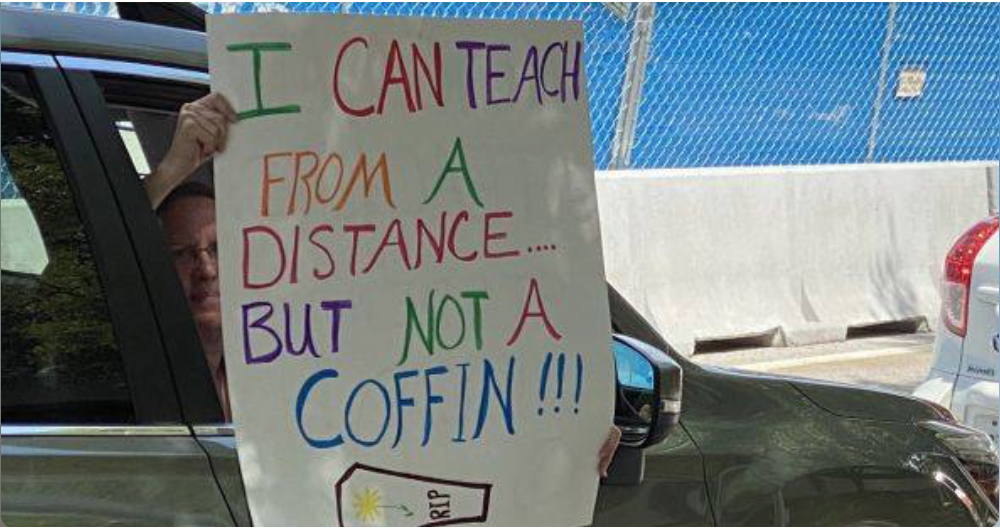 The lead photo of a Facebook page organizing a ‘Car Caravan for a Safe and Fully-Funded Back to School’ at the state Capitol during the summer. (Screenshot of a Facebook event page)

Leaders from the state’s largest education unions gathered outside the state Capitol on Thursday to call on Gov. Ned Lamont to close schools until mid-January unless the recommended safety precautions they’ve laid out are met.

They delivered a petition, which was assigned by more than 14,000 Connecticut educators, school employees and community members. It called for the implementation of statewide safety mandates included in their “Safe and Successful Schools Now” report and transparency from the state in the way it reports and responds to positive COVID-19 cases in schools.

Union leaders also expressed concerns about Connecticut’s recent rise in positive COVID-19 cases. As of Wednesday, the state’s seven-day positivity rate was about 7%, and all but nine towns were in so-called “red zones,” where the positive case rate exceeds 15 per 100,000 residents.

“To put it mildly, I’m afraid for the next week,” said Jeff Leake, president of the Connecticut Education Association. “With surging infection rates and vaccines for the general public not available until after the new year, the state must shift to full-time remote learning until at least mid-January to ensure that in-person learning is a safe strategy for our students and our teachers, not an experiment, not a gamble.”

The state Department of Education released a statement about the petition and list of demands Wednesday. It said the department will meet with union leaders and representatives to discuss what they’re asking for and “make recommendations for continuous improvement.”

“The health and safety of our students, educators and staff is and has always been our primary consideration as we work to address the educational crisis that has resulted from this pandemic,” said state Education Commissioner Miguel Cardona in the statement.

The debate over whether Connecticut schools should reopen has been going on for some time. At the start of the school year, unions presented a list of safety procedures and asked for schools to close until those were met and mandatory protocols were in place.

The governor has continued to leave school reopening and closing decisions up to districts. He and Cardona have also stressed throughout the school year that they want to keep schools open for in-person learning for as long as they can.

According to state data, 43.7% of the districts in Connecticut were operating under a fully remote learning model for the week of Nov. 30-Dec. 4. This in part is due to teacher shortages and an increase in COVID-19 cases in schools, although the state has said transmission is far more likely in communities outside of schools.

Additionally, October attendance data shows students learning remotely were missing twice as many days as those learning in person.

While the education unions and their members say they understand the value of in-person learning and eventually want to return to that setting, they  want balanced or equal safety measures for educators, school staff and students.

“We all want to be in schools with our students, in the school buses, in the cafeteria, in the playgrounds and classrooms,” said Mary Yordon, president of the Norwalk Federation of Teachers, AFT Local 1727 and Vice President of the American Federation of Teachers Connecticut (AFTCT). “We want that without unnecessarily high risks to ourselves and to our families. We want to know that our needs as employees are considered as well as the needs of our students in the schools.”

This article right under an article about West Rocks now closing due to Covid reports…. Doesn’t the Superintendent read? I applaud teachers who still are going in every day to teach the kids. I think they deserve the same hazard pay that medical and first responders get until they are allowed to teach remote. The vaccine is still a long way off. But I’m just the guy commenting on these articles and trying to open certain peoples eyes to the problems going on which they seem to ignore as their schools close all around them. Close the schools until January. There’s a week and a half left. What learning actually happens anyway on the two days before holiday break? Have fun going down with the ship Captain.

Great picture with no mask on.

Norwalk Dude… parents matter and kids matter…perhaps they should close the schools without pay and then they reopen and kids can go longer than June. OUR kids are not being educated to their full potential and that should be the concern! The mayor needs to wake up and get testing open so it is easy and it is at all the schools. He better have a process for the vaccine and all teachers should have access to it. We as parents could get more than 14,ooo signatures to keep the schools open. I have heard that some of these teachers and not all are asking for schools to go remote so they can quarantine to go visit family. Wow… we are not supposed to be visiting family and having large gatherings. Can’t have it both ways.

I don’t know of any first responders or healthcare workers getting hazard pay although I know some nurse’s unions were pushing for it.

Tell you what Mary Yordan. Let’s close schools and then we can open them when the vaccine is out and they can go through summer. We stop paying everyone until you can step up to the plate and we focus on educating our kids. Or better yet…let’s fire everyone and hire people back as work at will employees like most people in the State of CT. Enough. I am done with the union calling the shots. It must be a violation of ethics that Mary’s husband is the mayor’s campaign treasurer. How corrupt is that?