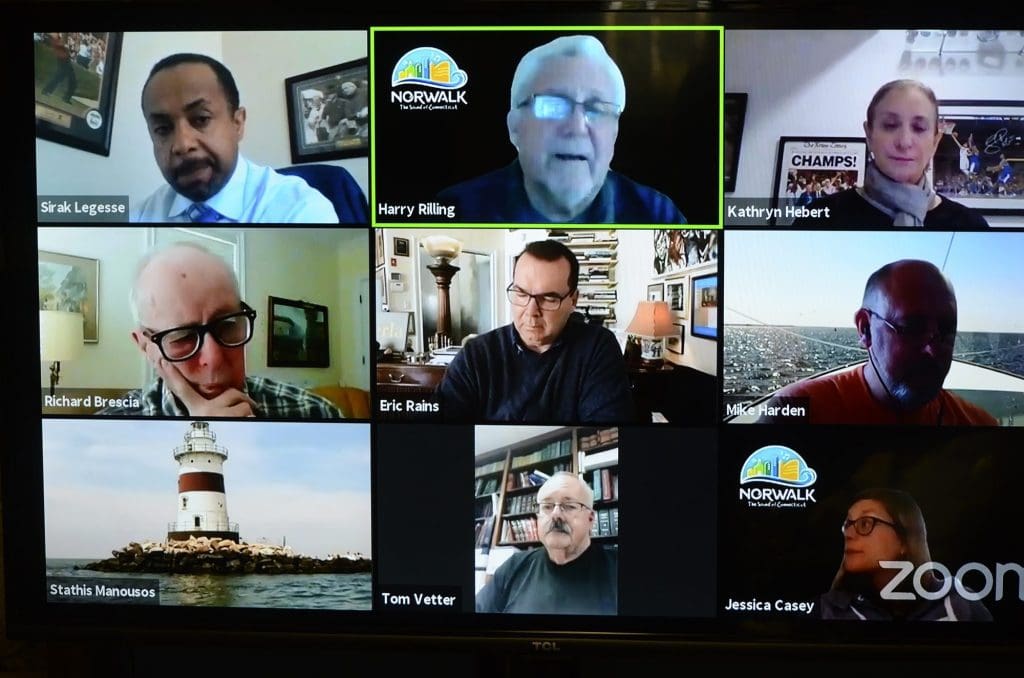 Correction, 5:22 p.m. Friday: No commitment has been made regarding fees after May 31.

NORWALK, Conn. — Two alternative parking fee plans were put forth by Transportation, Mobility and Parking Director Kathryn Hebert in Wednesday’s Parking Authority virtual meeting.  Both plans call for fees to be waived through May.

Pointing to a fund balance sufficient to cover the revenue shortfall caused by either plan, she said, “Thankfully, the Parking Authority did a lot of smart budgeting, and the audited fund balance at the end of 2019 is a little over $2.8 million.”

The Parking Authority expects to decide which, if any, plan to adopt in a meeting slated for Wednesday April 22. Parking Authority Chairman Dick Brescia on Friday explained that the body was studying options to gather information and be prepared for the uncertain future. No one knows what conditions will be like a month from now, he said.

Chief of Economic and Community Development Jessica Casey spoke of impediments to obtaining grants for struggling local businesses: “At the state level, through the Bridge program, they were expecting 1,000 applications and they got more than 3,000, and had to close the program down within a 4-day period.”   Casey said she is “thinking about being able to prop up local businesses without doing specific local grants or being able to provide loans,”  by way of weekly or bi-weekly city-organized events such as farmers’ markets, regattas, concerts, and “events that focus on shellfish and the food that Norwalk has and is bringing in out of the harbor every day.”

Mayor Harry Rilling had keynoted the meeting by urging caution. “We now have 41 deaths of our citizens here in the city of Norwalk,” he said.  “We are nowhere near out of the woods.  The other day the governor said that he has selected May 20 as the day that we will take another look at what’s happening.  I for one would hope that we do not open schools on May 20, sending almost 12,000 students back into confined quarters along with their teachers, guidance counselors, food service workers and custodians. I think that’s a recipe for disaster… When I look at May 20th, I think at the very best in May we’re going to see perhaps an easing of some of the restrictions based on what we’re seeing throughout the city, throughout the state, and mainly throughout Fairfield County.  If I were to make a decision that I feel would be appropriate, it would have to be approximately 14 days between the last positive case, or maybe even longer because if we see one or two or five more cases in the city of Norwalk, we have to assume that each of those people that tested positive are going to infect at least one other person.  While they’re asymptomatic, they’re still spreading this virus, but they don’t realize it.  The biggest danger we have right now is complacency or a false sense of security.”

Harry you are doing an amazing job and very thoughtful in your approach. stay safe

There should be a plan to screen returning students. Just as the school is mailing homework home, say add a questionnaire to determine if the families have been practicing safe socialization. Maybe a home test for the virus will be available by that time which can be done ahead of reopening. The readmittance could be done in stages and testing temperatures of the incoming students for fever would be practical.

“It would have to be approximately 14 days between the last positive case, or maybe even longer because if we see one or two or five more cases in the city of Norwalk“

I kinda think if this criteria is used the city will NEVER reopen.

In such economic times, charging for parking is ludicrous! The city of Norwalk needs to stop focus on anything that is not conducive to the well-being of its residence and charging for parking does not allow for people to self-quarantine or stay home. You wouldn’t want anyone to cough on your parking authority vehicles out of anger.