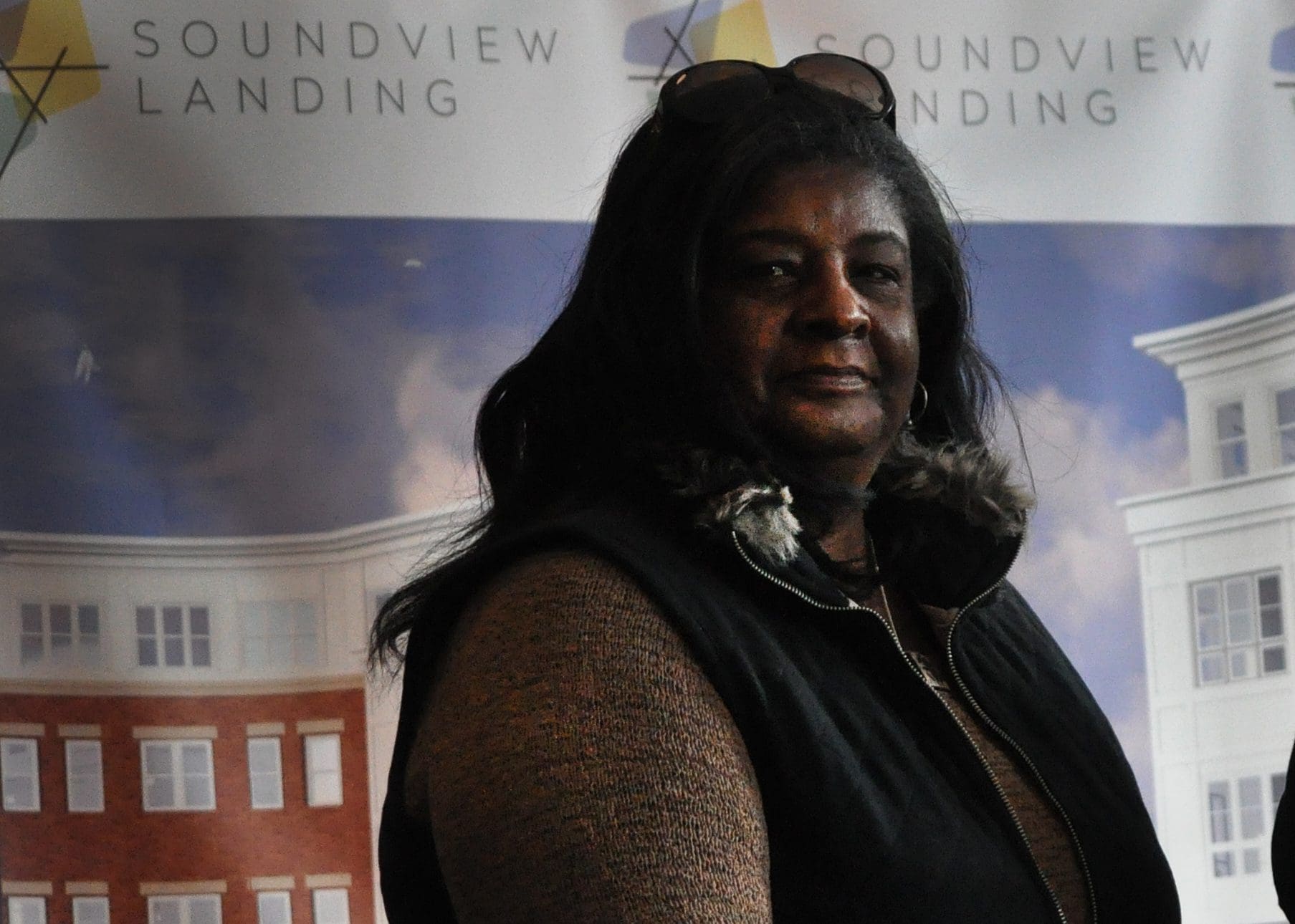 Both lawsuits were filed by Ryan Daugherty of Daugherty Law Group. The firm filed a class action lawsuit against the Board of Education in July 2019, alleging wage theft, resulting in a $400,000 settlement in October.

Both cases first went to the Connecticut Commission on Human Rights and Opportunities (CHRO).

Penn-Williams, Norwalk Branch NAACP President, alleges that then- Norwalk Superintendent of Schools Steven Adamowski and Norwalk Public School discriminated against her when her employment as a substitute teacher was ended in October 2018. She had been a substitute from June 2014.

She also alleges that she was being retaliated against for exercising her right to free speech.

This issue was first reported by NancyOnNorwalk in 2019. The termination came shortly after Penn-Williams had a hot exchange with then-Board of Education Chairman Mike Barbis at a Board meeting. Penn-Williams complained of a “all white Board,” decried the demotion of Lynn Moore from her role as West Rocks Middle School Principal and called the treatment Marie Allen, former Briggs High School principal, “unfair.”

Barbis tried to shut her down after she slammed NPS Chief of School Operations Frank Costanzo for his legal problems, which have since been resolved.

She had made similar comments at rallies, calling for Adamowski to resign.

Adamowski, at the time, cited Penn-Williams behavior during a visit to Norwalk High School as the reason she was terminated, accusing her of “disruptive behavior and providing misinformation to parents.”

The complaint, filed Wednesday, said Penn-Williams spent five minutes inside an NHS classroom on Sept. 14, 2018, at Principal Reginald Roberts’ request. On Sept. 24, 2018, she attended a conference with parents whose child had been suspended. Her fiery appearance at the Board of Education meeting came the next day.

Costanzo and Valensizi met with Roberts on Oct. 3, 2018, and Roberts told them that this was the first he’d heard of complaints against Penn-Williams, and that she had not been loud or disruptive during the Sept. 14 visit, the complaint states, alleging that Roberts did not agree with Adamowski’s description of her visit.

Costanzo didn’t attempt to confirm Roberts account of having had an appointment with Penn-Williams on Sept. 14, according to the complaint. On Oct. 24, 2018, Roberts was “issued an Administrator Warning Letter for failing to ‘prevent the disruption of classroom instruction and learning.’”

The complaint argues that NPS cannot reasonably say it terminated Penn-Williams because of her Sept. 14 visit to Norwalk High School because Costanzo and Valenzisi wouldn’t have waited until Oct. 3 to interview Roberts if her behavior had been that bad. Further, it alleges that Valenzisi didn’t bring it up when he met with Roberts on that Sept. 25, hours before the contentious exchange with Barbis.

Deputy Corporation Counsel Jeffry Spahr said Wednesday that Penn-Williams “entered into a classroom that was in session and was disruptive.”

“The teachers complained about her conduct,” Spahr wrote. “As a result, the intent was to prevent her from substitute teaching at the Norwalk High School. Just as the administration was contemplating allowing her to return, she was once more disruptive on the campus and disrespectful to the police on the scene.”

He said, “At present the District is not in charge of the hiring of substitute teachers. This is carried out by a third party service provider (ESS). It is my understanding that she may have not even been applying for substitute teacher jobs over the last great while. Her claims are factually and legally unfounded.”

“I’m not sure who’s in charge of hiring and firing substitute teachers now at NPS, but I do know that former Superintendent Adamowski terminated Mrs. Penn-Williams in October 2018.  That is a fact. We have an explanation for why we believe she was removed from the substitute teacher list in October 2018. I’m sure the Board has an explanation as well. A judge or jury will need to determine whose explanation they believe.  We are confident we can produce evidence to corroborate the allegations in Mrs. Penn-Williams’ complaint. Mrs. Penn-Williams has a meritorious claim and we intend to represent her claims with zeal.”

Norwalk Branch NAACP President Brenda Penn-Williams addresses the Board of Education on Sept. 25, 2018, as shown on the NPS YouTube channel.

Hagins, a Shelton resident, was employed by Norwalk Hospital as a phlebotomist in 2018, from May 14 through Oct. 31, when she was fired for alleged “time fraud,” the complaint states. She’s described as a Black lesbian, the only African American in a team of seven phlebotomists, working for a Hispanic heterosexual woman, Omaira Colon-Hill.

Colon-Hill is named as a defendant along with Norwalk Hospital, owned by Nuvance Health. According to the complaint, Colon-Hill called Hagins a “weirdo” in her first week of training and later, asked her to perform job duties not in line with her role as a “float phlebotomist.” Once, while talking to another employee, Colon-Hill called Hagins “butch.” Colon-Hill is described as not entering Hagins’ hours or location into Norwalk Hospital’s system correctly, after changing them via text messages and phone calls.

Colon-Hill is also alleged to have told Hagins “if you ever think you’re going to be late for work, just call me and I’ll punch you in.” Hagins never took her up on that, but her Hispanic colleagues did, according to the complaint.

Hagins was never reprimanded and had a job review before being suspended, in which she “received an overall rating of ‘fully meets expectations,’” the complaint states.

Colon-Hill is accused of intentionally sabotaging Hagins by telling Human Resource Manager Kelly Garretson that Hagins was stealing time and by withholding information. The alleged sabotage is attributed to Colon-Hill’s alleged bias against Hagin as a Black lesbian and by alleged resentment that she made more money than her Hispanic colleagues.

Garretson is accused of not getting enough information from Hagins before terminating her and of conducting an insufficient investigation because of bias and prejudice.

Andrea Rynn, a Nuvance Health spokesperson, said Nuvance does not comment on litigation.

So you still refuse to report on the public police record that is there, but have no issue reporting on sealed court records. You need to be sued out of existence.

I would like to sue Norwalk for lack of AC in schools, for packets to 2nd graders and lack of instruction, for how Rilling has talked to me and language he used and for the latest survey that NPS sent out and if NPS continue teaching to politics and continue to let our kids suffer with lack of learning in math, American History, science, English and writing.

Ryan Daugherty seems to be developing a cottage industry by suing NPS. Good for him. This is a capitalist society and if you can make a buck selling your wares, why not !!
Conversely, I think it’s time to have one of those hard transparent conversations everyone keeps talking about. Jeff Spahr needs to get creative. Can’t the city go on the offensive here? I’m guessing Daugherty will continue to go back to the well until it’s dry. It wouldn’t shock me if I opened my mailbox and found a flyer advertising Daugherty’s expertise in capitalizing on NPS. Again, capitalism at it’s best and Mr. Daugherty should be commended for it.
As far as Penn William’s alleged behavior at Norwalk High? I say let’s go to the videotape…IF there is none, it’s high time cameras were installed in any room which might hold a less than pleasant conversation about one’s employment. A cell phone would do..As we are looking for transparency everyone should be on board.

I emailed Mr. Meek on March 21 and asked what police report he was referring to at that time. He did not answer. I believe I also ran the names of all the Common Council members and BoE members through the State’s website, looking for pending cases and/or convictions, and found nothing.
I emailed him again today at 2:51 p.m., asking what public police report he is referring to. He has not replied.

I sure would like to know what public report Mr. Meek is referring to. It sounds as if he fesses up on what he’s talking about Nancy will report on it. Unless there is nothing and he’s just making it up?

I love how people (his”friends”??) seem to be coming to Barbis’ aid defending his racist rants, while nobody appears to condemn his racist acts. We need to hold racists accountable, its high time we whites start supporting Black people instead of calling them out when they defend themselves against systemic racism, structural racism, and actual racist BOE members like Barbis. He is the offender in the BOE who should have been fired, not Penn-Williams by NPS for standing up for herself and her students. I reject the characterization of Penn-Williams as “fiery” it’s the tired cliche’d depiction of the angry Black woman. Would the same have been done to Penn-Williams had her skin color been white? Where is the outrage for Barbis?? Those who come to his aid are protecting and thereby enabling racist to go unchecked. Yuck.

Thanks Jen for being the conscientious white woman to defend a black woman.