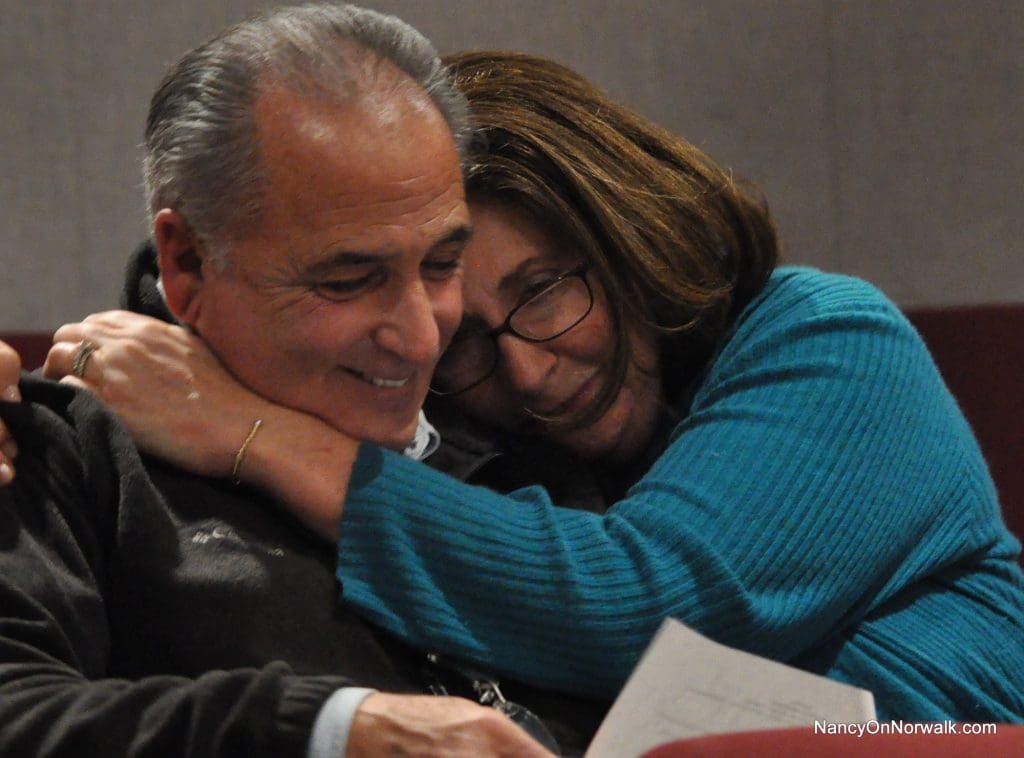 Vincent and Robin Penna react Wednesday to the Norwalk Zoning Commission’s approval of their application to use the old Armory site at 284 New Canaan Ave. as a contractor’s yard.

The proposal to allow A.J. Penna & Son to move its Liberty Square contractor’s yard to the state-owned land at the “old Armory site” was approved by the Commission, with just one dissenting vote.

Also approved was a new home for the Maritime Rowing Club, on King Industries property.

Both businesses, which are neighbors, are being displaced by the Connecticut Department of Transportation (ConnDOT) in its drive to rebuild the aged railroad bridge over the Norwalk River, the Walk Bridge.

“We’d like to thank the Commissioners for helping us to get a home,” Vincent Penna said.

In addition to general contracting, A.J. Penna & Son is an emergency on call contractor for Aquarion Water, Eversource Energy, Frontier Communications, the City of Norwalk (OMl), and the Town of Westport. Penna has said that access to a highway is key. ConnDOT officials found the armory site, at 284 New Canaan Ave., a 11-acre site with existing buildings that could be repurposed by the company, but some objected to moving the business into a Triple A residential zone.

Zoning Commissioner Louis Schulman on Wednesday cited that residential zone as the reason for his objection to the proposal, and said the zoning amendment proposed “really stretches too far the limits of what an amendment could and should do.”

Schulman had the lone no vote. The Commission passed both the zoning amendment and the special permit needed to allow the Pennas to move onto the property, with a list of conditions aimed at keeping the noise and light levels low along the property’s edge.

The Rowing Club at one time appeared to be in similar dire straits, but is now expected to rent two, 2-story tall fabricated steel buildings from King Industries, just north of the Yankee Doodle Bridge.

There were no objections to the rowing club’s plan at Wednesday’s public hearing on the application, although there were complaints about a bright light shining from the area of King Industries and complaints about rowers using bullhorns at 5 a.m.

Club co-owner Roman Vengerovski said he wasn’t aware of any coaches using bull horns that early but would speak to them and make sure they knew they shouldn’t do it.

Bob King said he’d investigate the reports of a light.

“If it wasn’t for the Vengerovski family and the Maritime Rowing Club, I would not be an Olympic rower,” Dan Walsh said.

“I commend King Industries for stepping up to the plate and being the great citizens of Norwalk that they have always been,” Patsy Brescia said.

ConnDOT is looking to begin using the land both businesses sit on this spring; last month Penna pleaded with the Commission.

“This is kind of our last throw at it,” he said to the Commission. “We have this property, we can use it, we can make it work. I will work with the community…. I think we’re good neighbors. We’re good people, we’ll do everything we can to make it work. At this point, I don’t want to go out of business. I don’t want to tell 30 people that they don’t have a job in a few months. I really am asking you for the consideration. Just give us a chance.”

Robin Penna said Wednesday that they must be out by March 31. ConnDOT and the Connecticut Department of Administrative Services will begin working on the land transfer Thursday morning, and it will probably be two months, they said.

Vincent Penna promised to “do everything I said we’d do,” and they both commented that it’s been, “a long two years.” 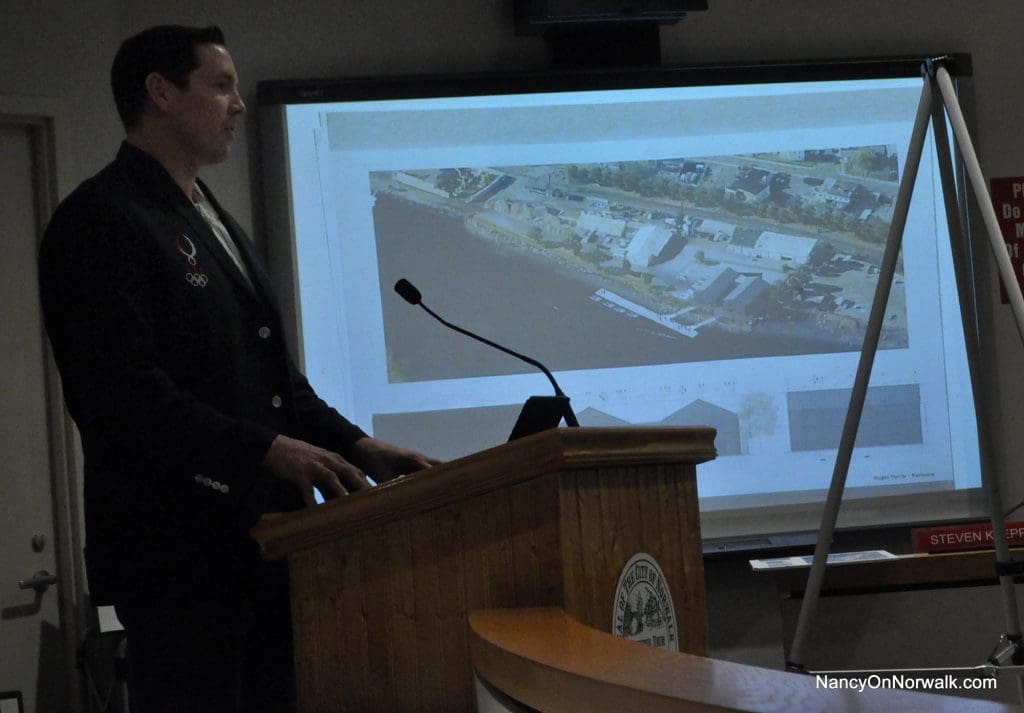 Dan Walsh sings the praises of the Maritime Rowing Club on Wednesday in City Hall.

Personally, I think that P&Z’s approval to rezone the Armory site for commercial use (in a residential neighborhood) will have long term unintended, negative consequences for the area, especially in light of previously approved commercial space (specifically for Penna) on Muller Avenue.

I hope I am wrong.