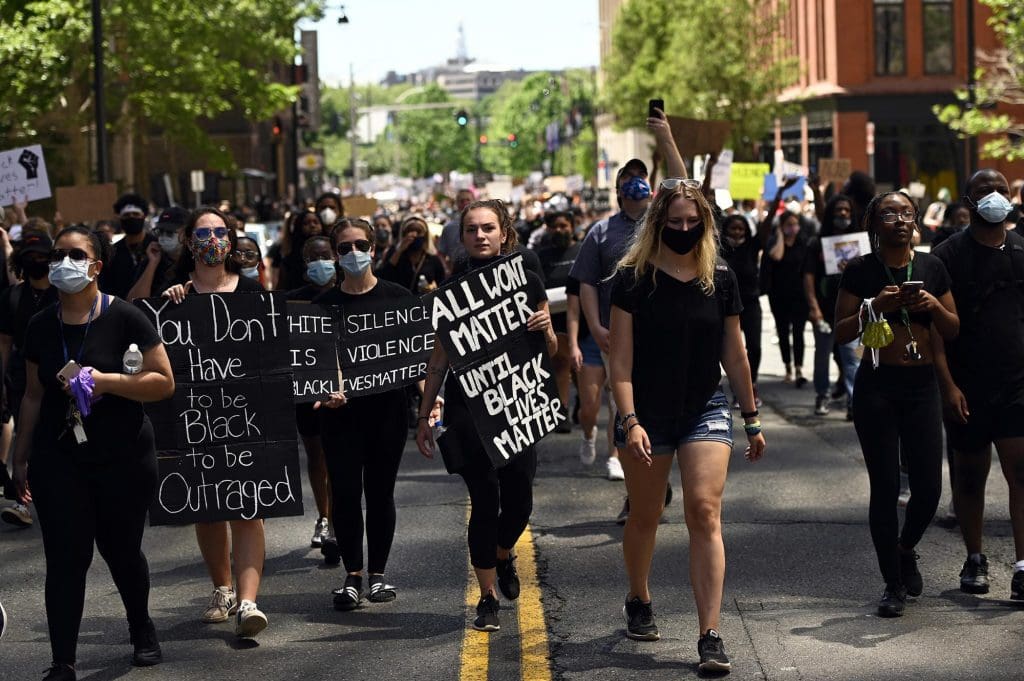 Protestors hit the street in the Hartford Rally for Justice. (CTMirror.org)

Protesters in Hartford, New Haven, Bridgeport, New London, and other parts of Connecticut joined a nationwide call for action Saturday following the death of George Floyd in Minneapolis police custody. The protests come as the COVID-19 pandemic continues to unfold — one day after the Gov. Ned Lamont signed an executive order that further relaxes state restrictions related to the virus.

Demonstrators wearing masks gathered in Colt Park and Bushnell Park in Hartford Saturday and marched in the street to the State Capitol — causing temporary delays for buses and traffic. The crowd leaving from Bushell Park marched by the Hartford Public Safety Complex on its way to the capitol. Demonstrators held signs to protest Floyd’s death, criticize police, brutality, and show unity.

Hartford Mayor Luke Bronin said in a statement that the protest was both powerful and peaceful.

In Bridgeport, protestors blocked the highway Saturday afternoon. The 27a off-ramps of I-95 South and North were closed and Route 25/Route 8 also faced closures, according to Connecticut State Police. The state police worked to reroute traffic.

“Your voice will be heard,” the Connecticut State Police said in a tweet shortly after 5 p.m.

And, in New London, a rally was organized by Jinneka Jackson from Norwich.

“I just decided we needed action,” she said. “Facebook posts are not enough, we need to get involved.”

“We have a voice, and if we don’t use it, nothing’s gonna happen,” he said. “Having all these people use their voice, it’s going to be heard one day.”

“Equality, that’s really it,” Johnson said. “That’s all the fight is for.”

And Nae-shawn Teague, 16, also from New London, said people who don’t live in minority communities can’t understand what he sees when he sees the video of Floyd’s death.

“There’s no way for them to understand it because they’re not around it, they don’t see it constantly,” Teague said. “Where they come from, they’re used to police being the good guys, their friends, they help them. But they’re not used to seeing police killing people for no reason, beating them, arresting them for no reason.”

New London Police Chief Peter Reichard was invited and addressed the crowd. He has condemned the actions of officer Derek Chauvin, who was charged in Floyd’s death. And Curtis K. Goodwin, a New London city councilor, said this is not a time to wait.

“To be a poor person of color in America is a tough thing to do,” Goodwin said. “It is truly tough.”

Protests in Connecticut Saturday remained peaceful while looting and rioting has plagued protests in cities including Minneapolis and Atlanta. Minnesota officials announced Friday the former police officer who pinned Floyd under his knee while Floyd was in handcuffs would be charged with murder.

Under the new order:

There were 260 new cases of COVID-19 reported in Connecticut Saturday, according to public health data. Numbers released Saturday say 533 people are now hospitalized with COVID-19 in the state, a drop of 44  people since yesterday. Forty-four more people died with COVID-19 than yesterday, bringing the total to 3,912.

New Haven to hold a moment of silence Monday

New Haven leaders will hold two minutes of silence Monday in honor of the more than 100 city residents and 100,000 people nationwide with COVID-19 who have died. New Haven joins cities and worship communities around the country in the National Day of Mourning and Lament movement. New Haven Mayor Justin Elicker is asking residents — along with faith and community leaders — to observe two minutes of silence starting at 10 a.m. Monday.

“As individuals, residents of our City, and collectively as a nation, we need time to stop, reflect, pray, mourn, and honor the dead,”  Elicker said in a statement Friday.