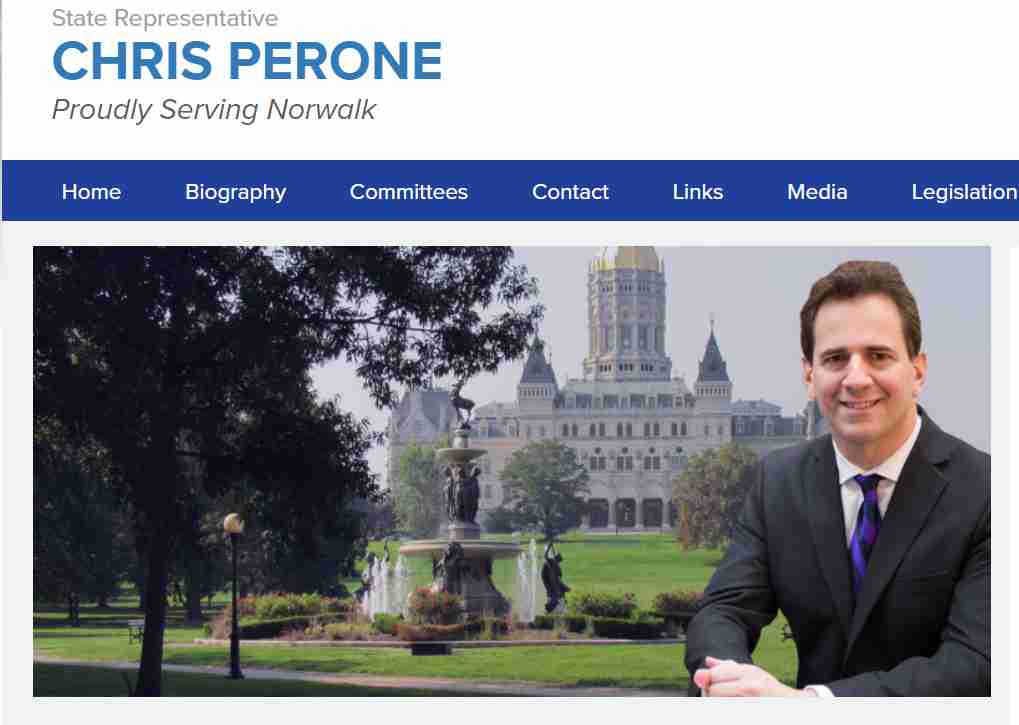 NORWALK, Conn. – Chris Perone is retiring from the Connecticut General Assembly District 137 seat he has held since 2005.

“This has been a very difficult decision, partly because of the tremendous support that so many people have expressed to me but in larger part, because voicing the concerns of the residents of my district, echoing their values, their priorities and their hopes for their children’s future has been a privilege,” the State Representative said in a news release. “I am grateful for the support I have received and the trust the citizens of the 137th have placed in me and I am humbled and thankful for that.”

This leaves an opening for a newcomer. The Norwalk Democratic Town Committee meets Monday to select candidates for both the 137th District and the 140th District where Travis Simms, a Democrat, is the incumbent.

Norwalk Republicans said Monday that they didn’t have a candidate for either district, both considered Democratic bastions. The deadline for an endorsement is Tuesday. Republican Town Committee Chairman Fred Wilms said Friday that the RTC was still unable to find a candidate.

He “spearheaded several important initiatives including the passage of an income tax credit for parents who invest in the State’s 529 plan, creating the Connecticut Broadband Internet Coordinating Council (CBICC) whose focus is to ensure that all residents and businesses in Connecticut have access to affordable broadband service, and pushed through regulatory flexibility law that would protect small businesses from excessive state regulation,” it said.

Perone was appointed Chief Transportation Financial Officer for House Democrats in 2017. According to the news release, he “authored legislation to create a framework to evaluate transportation projects and their impact on economic development, transit-oriented development, housing development, access to employment, the environment, traffic congestion and public safety.”

Perone “earned recognition for his commitment and support to small businesses through initiatives like the Small Business Express program, the state’s Advanced Manufacturing Fund, economic development policies and the creation of a Connecticut Port Authority to help provide Connecticut businesses with new ways of transporting their goods as well as championing a deal that will keep Sikorsky Aircraft in Connecticut until at least 2032,” the release states.

He also “worked on a range of issues including working to bring the P-TECH education model to Norwalk. Raising the state’s minimum wage, establishing the paid family leave program, supporting victims of domestic violence, and protecting vulnerable populations and programs.”

“I am proud of my work and my proven track record on behalf of the constituents that sent me to represent them in Hartford. Working with Senator Duff and the Norwalk legislative delegation to bring millions of dollars in funding to support Norwalk’s public schools, the Maritime Aquarium and more recently to the Gallaher Mansion and Norwalk YMCA are some of the rewarding accomplishments that I am delighted to tout,” said Perone in the release.

In the recently concluded 2022 session, Perone “joined efforts to protect the health of Connecticut residents by helping to cut the carbon footprint, increasing the reliance on clean energy sources, supporting policies that will require Connecticut to eliminate greenhouse gas emissions produced by the state’s electric grid by January 1, 2040 and clean energy tariff programs to increase commercial reliance on rooftop solar energy,” the news release said. “Several times during his service, he earned perfect voting scores from the Connecticut League of Conservation Voters (CTLCV) for his support of a cleaner and healthier environment.

“In addition, Perone helped secure over $600 million in tax cuts for residents and huge investments in economic recovery,” the news release continued. “As a result, Connecticut is in a good position to make groundbreaking investments in arts and culture organizations including museums and theatres, as well as providing increased business development funding for minority-owned businesses to drive economic prosperity in communities and make Connecticut more equitable.”

“Chris had always had Norwalk’s best interests at heart and worked to ensure our city always had a seat at the table,” State Senate Majority Leader Bob Duff (D-25) said in the release. “Chris is more than a legislator but a trusted friend. I will miss working together but wish him all the success in the future.”

Perone is quoted as saying:

“It has been the honor and privilege of my life to serve as Norwalk’s state representative and for this gift I’ve been given.  I am truly thankful and humbled. And while the accomplishments I’ve listed made liberal use of the personal pronoun ‘I,’ the simple truth is that public service is a ‘we’ enterprise. The list of people, organizations, neighborhood groups and individuals is vast, starting with the leader of our delegation and by my estimation, one of the best state senators in the United States, Senator Bob Duff. Our extraordinarily talented delegation for their support and counsel. Mayor Rilling for his leadership in keeping the focus on what’s best for Norwalk. Local advocates who have made their voices heard on mental health, ECS funding, transportation, economic development, low-income housing, environmental matters, closing the achievement gap an historic preservation with passion and tenacity. And finally, I need to thank my wife Christy and my son Harrison for their support and encouragement. Thank you.”

Hopefully a candidate suggesting that encouraging major firms bringing new employment to CT’s decade long stagnant economy is at least as important as maintaining the welfare of CT’s largest industry – its public Unions.

Hopefully a candidate who will ask vigorously why so many of CT’s children do not meet CT Edu Dept graduation standards or ever secure 4 yr college degrees.

Hopefully a candidate who can see a “connection” between CT’s high State and local property taxes and its decade long stagnant economy/population/em;ployment level.

Wink was right to criticize Perone’s attendance record. He missed more in person committee meetings than he made.
It should be noted that Perone now has full health benefits for life thanks to his time as Rep. Not a bad sendoff for a part time gig, and the voters of 137…

Rep Perone from my experiences is a good man, yet as a resident of 137th district & a person that voted for him twice in previous election cycles I say he was not able to save the 137th from state or local imposition on our zoning, hence quality of life. It’s takes a team to secure our communities and despite all best efforts my community is going to become a completely different place. I remain optimistic, still. Let’s see what the next 2 election/ ejection cycles bring.

Regarding the comment about “full health benefits for life,” here is a report on retirement benefits for CT state legislators. The plan has been updated since this was written, but this is the easiest summary to read and digest that I found. https://www.cga.ct.gov/2003/olrdata/lm/rpt/2003-R-0521.htm

@ Elsa — Thanks for the charts…Guess what — It just so happens that Perone turned 55 during his last term. Bottom line to a skeptic – He was a Rep for the health benefits. AS soon as he qualified at age 55 + 10 years service he could cash in on lifetime benefits.
#Travesty

I wonder if the Republicans will be able to find a semi decent candidate for this? Anything is possible, right?

Let’s hope that we can see our schools secured. I wonder what Newtown has in place and how it compares to other grade schools in our area