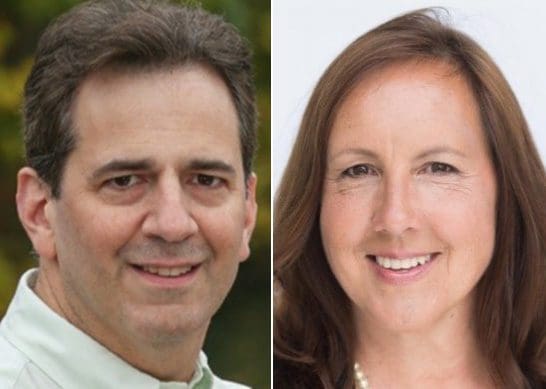 NORWALK, Conn. — The League of Women Voters of Norwalk invited all candidates for State Senate and State Representative in Norwalk’s districts to submit responses to a six-item questionnaire, a photo, and a campaign URL. Here are the answers from State Rep. Chris Perone (D-137) and his Republican challenger, Ellen Wink.

“In 2009, at the height of the great recession, myself along with then Majority Leader Denise Merrill convened the Majority Leaders economic roundtable. We brought in economists, business leaders, academics, tax professionals and other citizens to review new ideas about how to get our economy moving again – and how to put our citizens back to work. The resulting legislation which spawned initiatives in green jobs, R&D tax credits, job training, the origins of the small business express program, regulatory reform and advanced manufacturing assistance continue to bear fruit today. It is because I went through that experience, learned to prioritize what the most effective approach should be to restarting our economy and helping our residents find work, I feel make me uniquely qualified to take on the challenges of rebuilding our states economy as we reopen.”

“I have been the Go To person for my whole life. Give it to the busiest person you know and it will be done. I have a degree in Biology, a life experience of Long Term Care Administration, a business owner for 21 years, in a family business for over 42 years. I’ve stepped up on numerous occasions as a Coach, Commissioner for Norwalk Athletic Association, asked to co-chair a fundraiser for the purchase of Thermal Imaging Cameras for Norwalk, City Clerk, Commissioner Redevelopment Agency and running for Office within Norwalk.”

“I supported the police accountability bill. Job training prevented me from being in the chamber to vote on the legislation but had I been there I would have voted “yes.” Going forward I will make sure that the tenants of the statute are supported and funded in the way they were intended to be. However, this was landmark legislation. It was brand new in depth and scope which means there still many things about it which need to be worked out as it is being implemented. That’s why input from both the law enforcement community and the community at large is still vitally important.”

“THIS HAS TO BE TOTALLY SCRAPPED!  This bill leaves every Citizen of Connecticut vulnerable, not to mention the Police and First Responders. The only population this serves are the Criminals. We also have large defense contractors within our State and would be a first target.”

“Protection from eviction and bankruptcy insurance are two areas that are vitally important to the residents of Connecticut. While our focus is to get everyone reemployed as quickly as possible, our focus also must continue to be on ensuring that all Connecticut residents have a roof over their heads.”

“The Towns should have their own say in their OWN YARD. No State Interference.”

“The pandemic has complicated the question of the utility of state mandates vs local autonomy. I have always considered the 1,300 unfunded mandates on the books to be a problematic cost shift to municipalities. The economic impact of closing the economy and the fact that its effect is being felt differently by towns and cities must also be factored in to the mandates discussion.

“Statewide or regional consistency of effectiveness of mandates, I believe, needs to be viewed in context. One example would be mandates on greenhouse emissions. According to the American Lung Association, Fairfield County has among the worst ozone pollution in the northeast – as do most counties in the region. Now add to that a dangerous respiratory virus and the mandates regarding tougher pollution controls and improved air quality take on a much greater importance than in other parts of the state.”

“Many statewide laws and mandates are old and out of touch with today. They drain Municipal budgets with little consequence and effect. Connecticut is so diverse- as our Towns and Cities have different needs. Some consolidation has occurred for certain services. Review and Revise!”

“In 2019 I supported a resolution authorizing a referendum on amending the Connecticut Constitution to permit early voting, something that is permitted in most other states.

“In short the referendum would have asked voters if they want to remove a constitutional prohibition on early voting. While the resolution ultimately didn’t pass the senate, if elected, I would support a similar referendum in the future.”

“No, I will not support this change.”

“The pandemic abruptly reoriented the Connecticut’s near and long-term priorities that will require legislative solutions to address. Specifically budget decisions related to COVID, preparing for the second wave of the pandemic, ensuring that we have enough PPE, increasing our testing and tracing capabilities and reopening safely.

“Recovery depends on protecting public health. It also means bolstering human capital, which can be done by helping individuals stay in their jobs or attain the skills they need to find new ones. Additionally, we need to focus on easing critical expenses, and providing businesses with regulation relief and liquidity support to prevent them from closing or filing for bankruptcy.

“Maintaining a safe learning environment for both students and educators continues to be critical to our overall recovery. Testing and screening protocols, mask wearing, social distancing while still allowing for student activities requires clear communication between state and local health officials and school districts.”

“There are better qualified individuals to handle this situation than any of us reading this answer! Heed their advice. I do understand infection control but this Virus is deadly! I am upset that the State of Connecticut placed Covid infected persons into our Long Term Care Facilities (who remain underfunded and over regulated).”

I’m disappointed there wasn’t a question regarding utilities and Eversource. Especially when you consider Chris Perone is on the Energy committee. It should be noted Perone was absent for every Energy committee meeting this year, INCLUDING the meeting immediately following power outages in August. Shouldn’t our elected leaders at least show up for committee meetings? Even if you don’t participate at least show up..ESPECIALLY after Eversource power debacle. Holy Cow. Even the most staunch Democrats have to give him an “F” for representation. Again Chris may be a nice guy, but we need active elected officials who don’t need GPS to find Hartford. Is that too much to ask?

Chris Perone should change his name to “Casper the ghost!” He rides the wave of the dems but does nothing. He misses all the votes and continues to stay in office. He must take this job for the free state license plates on his car. At least in the old days the reps handed out combs or the rubber jar openers. Do something Casper